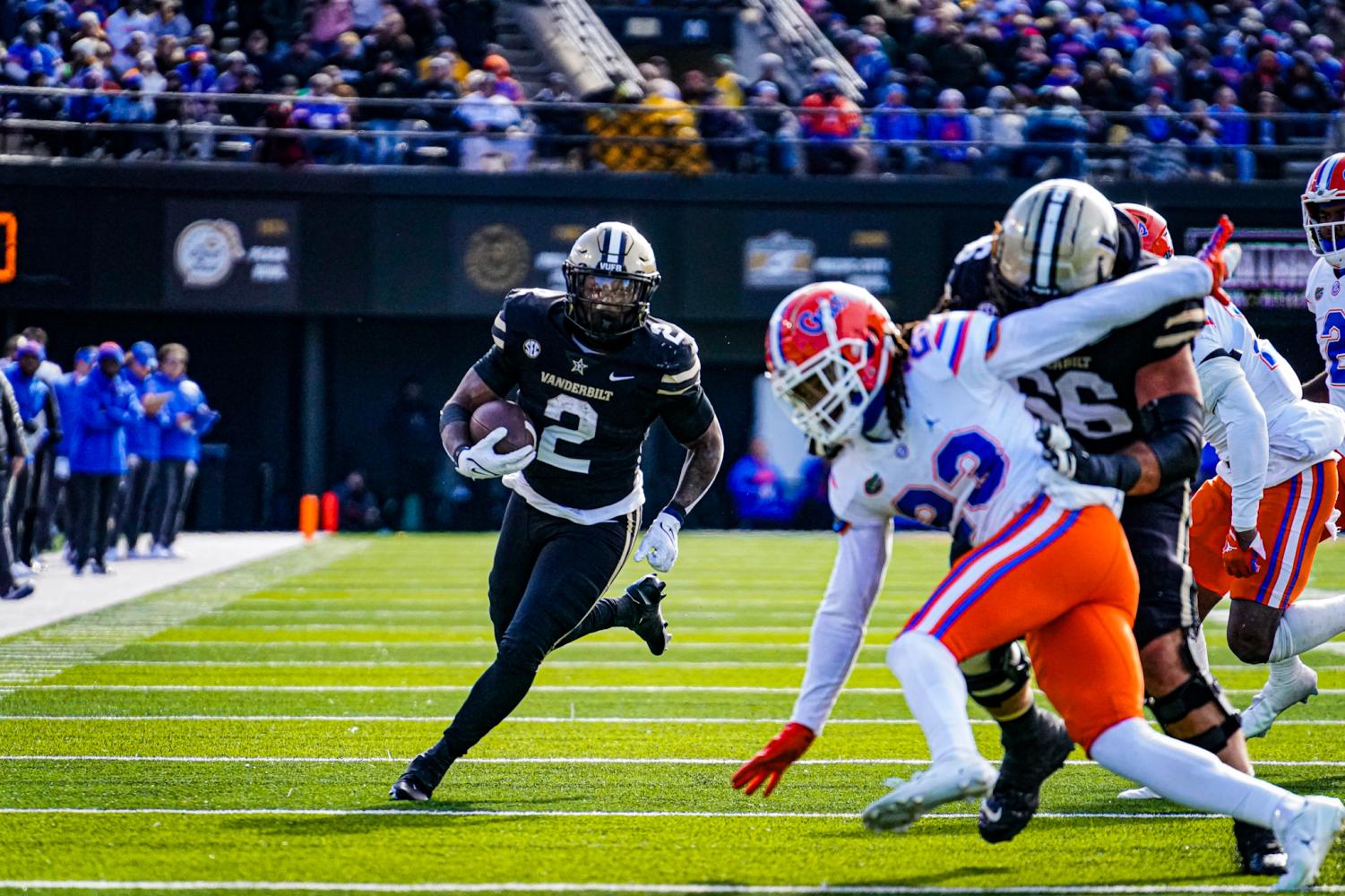 Ray Davis’s path to stardom has been anything but linear.

A three-star high school recruit with only four high-major offers, Davis committed to Temple out of the Blair School in New Jersey in 2019. Davis exceeded expectations as a freshman, rushing for 936 yards and 8 touchdowns for the Owls. His highlights included a 135-yard, 2-touchdown effort in a win over Georgia Tech and a Military Bowl appearance against North Carolina. Seems like a pretty good start, right?

In a season ravaged by COVID-19, Davis played just four games in 2020. In November, he opted to enter the transfer portal, and, by the end of the month, he had committed to Vanderbilt.

Again, Davis showed up on campus and balled out early on. He was a lone bright spot on a Vanderbilt offense that struggled early in Clark Lea’s tenure, with his best game coming against Stanford in the team’s third contest of the season. Davis dashed for 76 yards and a touchdown  but limped off midway through the game. It would be his last action of 2021; he later revealed that he had torn a ligament in his toe, requiring surgery.

“During the rehab sessions, there were so many times I wanted to quit,” Davis told The Hustler. “I never knew if I was gonna be able to come back and be the same. A part of me just wanted to give up.” 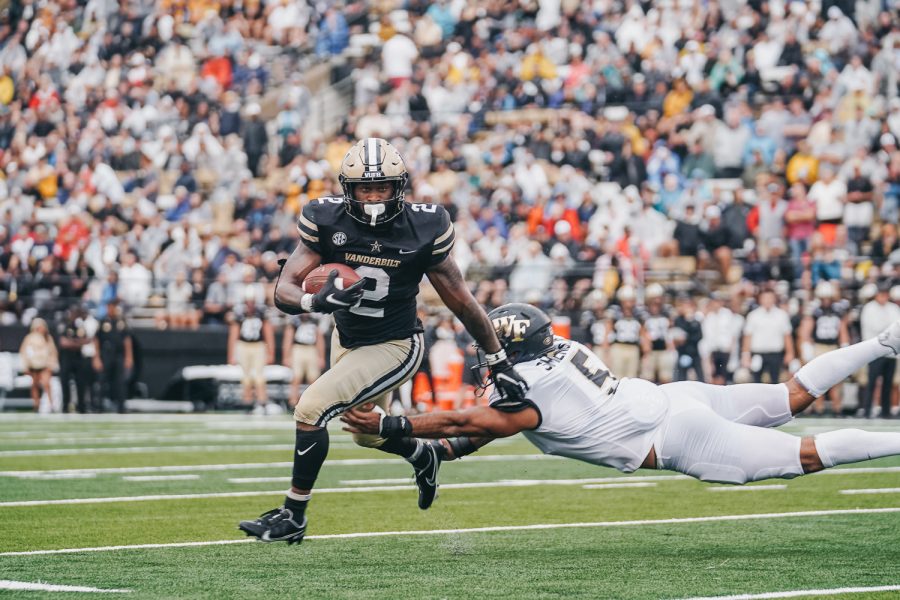 After a freshman year breakout followed by two years of playing just seven games combined, that sentiment is understandable. Davis attributes his support group of friends, family and teammates as the reason he kept going and found a new mindset.

This season, Davis has come back and thrived, to say the least. As a senior, he’s been a leader in a young running back room that has dwindled to just two healthy scholarship players after defections and injuries throughout the season.

“I knew that I was gonna have to come in and just be a leader that we needed,” Davis said. “We’re a young group, we’ve got some freshmen and sophomores and me being the only senior, before [walk-on] Cooper [Lutz] got in, I knew I had to be strong for those guys. This season, I knew it was going to have to be a big year for me; I was going to have to showcase what I did my first year in 2019 and do it at the highest stage of it all, in the SEC.” 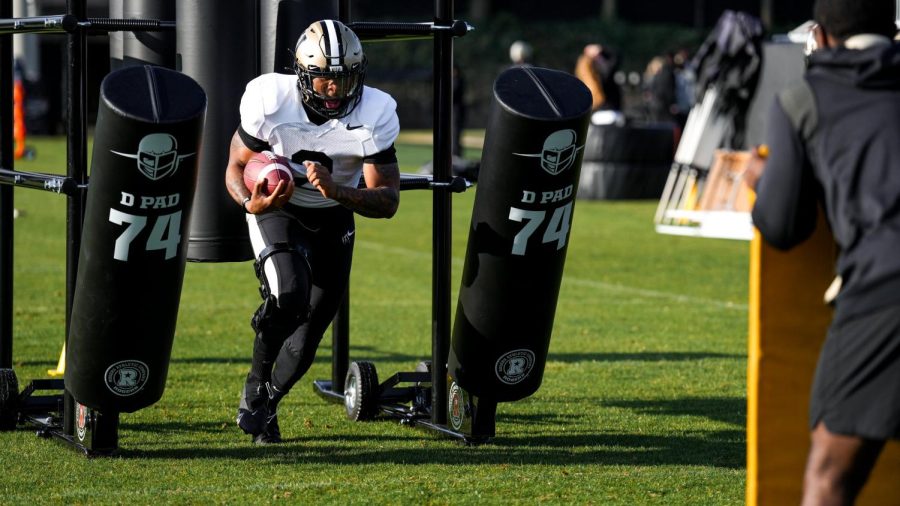 In 2022, Davis has emulated his sensational freshman year at Temple and then some. The California native has paced Vanderbilt’s rushing attack this season, galloping for 982 yards in 11 games thus far. He’s also hauled in 24 catches for 152 yards and amassed 8 total touchdowns.

Much like his career up to this point, the season hasn’t been without ups and downs.

After a productive nonconference showing, Davis entered into a bit of a lull once SEC play started. The senior failed to rush for more than 30 yards in 3 of the Commodores’ first 4 league games. His toughest game of the year came in a 15-carry, 28-yard performance against a strong Missouri defense.

“The Mizzou week, I think I dealt with a lot of adversity in the sense that I heard the outside noise and people thinking that I couldn’t get the job done, that I wasn’t what people thought I was going to be and that I didn’t belong in the SEC,” Davis said.

Again, overcoming adversity has continued to be a theme for Davis this season.

“I just honed in on myself and just focused on myself, and I knew that a lot of people were gonna write me off, but I couldn’t write back, and I couldn’t focus on the naysayers,” Davis said, stealing a quote from Seattle Seahawks quarterback Geno Smith.

Of all positions in football, running back is one that is especially prone to injury and wear and tear over the course of a season. Despite this phenomenon, Davis has gotten stronger as the year has gone on; his best stretch of the season has come as of late as he’s rushed for over 100 yards in each of the Commodores’ last three games. After the down game against Missouri, Davis bounced back for his best individual game of the season against South Carolina (167 yards rushing) and played a monumental role in the team’s wins over Kentucky (129 yards) and Florida (122).

The senior credits his growth mindset, dedication to the film room and attention to his mental and physical health as reasons for his uptick in productivity late in the season.

“I just had to come in and grind and work. I spent countless hours after that Mizzou game watching film from every game that we played this season,” Davis said. “I watched the Mizzou game probably two, three times trying to fix a lot of things I needed to fix. And I was able to fix those things going into South Carolina and then again, keep progressing as Kentucky came and as Florida came. It’s also about keeping my body right, in the right shape and the right state of mind.”

As he aims to become Vanderbilt’s seventh 1,000-yard rusher in school history on Saturday, Davis won’t forget about those who didn’t believe in him along the way.

“Going into the season this year, I was on Twitter, and I saw I was not ranked in the top 50  NCAA running backs and not ranked in the SEC,” Davis said. “If you go back to my Twitter, I retweeted those tweets and I just said ‘noted.’ I knew coming into the season I was gonna have to prove everybody wrong, and I think being 18 yards away [from 1,000] shows that I decided to put my head down and work.”

Davis certainly won’t forget about the offensive linemen paving the way up front for him, either.

“I wouldn’t be in this position without the guys up front, the ‘Grease Gang’: [Bradley] Ashmore, Gunnar [Hansen], Jacob [Brammer], Ben Cox, Juju [Azebu]. I know I wouldn’t have ever achieved this without those guys,” Davis said. “It’s good to be able to go down in the record books with the great running backs, Ralph Webb and Ke’shawn Vaughn, and the guys who came before them, so I’m happy to be able to do that.”

Davis’s unique capability as a pass-catcher out of the backfield is another dimension of his game that has improved in 2022. The senior has a career-high 24 catches for 152 yards and 3 receiving touchdowns this season, adding another tool into his arsenal of tricks.

“I’m a versatile running back,” Davis said of his play-style. “I’m able to get out there in the pass game, play receiver and catch out the backfield and then also be able to get the tough yards when needed on third down and short, or even just being able to break explosive runs. So, I definitely would say I’m very versatile. ”

The senior’s progression into a multidimensional pass-catching back parallels the skillset of the modern NFL running back. Undersized tailbacks like Austin Ekeler and Aaron Jones who can run and catch out of the backfield have thrived in the modern era’s pass-heavy game. Davis mentioned California legends Ladanian Tomlinson and Darren Sproles (San Diego Chargers) and Reggie Bush (USC and New Orleans Saints) as running backs of that mold whom he looked up to growing up.

“As a kid, I used to love Ladanian Tomlinson and Darren Sproles; that duo they had with the San Diego Chargers back in the good old days,” Davis, a San Francisco native, said. “As a kid, I didn’t get to really watch his [Reggie Bush’s] USC days, but I got to watch when he was a [New Orleans] Saint, and I always admired what he could do.”

Today, Davis considers NFL running back Saquon Barkley, who came back from a torn ACL in 2020 to be second in the NFL in rushing yards in 2022, as his role model for this season.

“I think there’s some similarities [between me and Barkley] in that people kind of wrote him off, people didn’t think he’d be able to redo what he did his rookie year, and now, he’s kind of showed all those doubters that he can, that’s he’s still the man,” Davis said.

Like Barkley, Davis has been an instrumental piece in his team’s successful rebuilding efforts this season. Barkley’s New York Giants are off to a 7-3 start—their best season in years— while Davis’s Commodores are 5-6 and on the brink of bowl eligibility for the first time in four years.

Davis—whose two years on campus have coincided with Lea’s two years as head coach at Vanderbilt—has seen the rebuilding process from the ground up. He was a part of last year’s winless SEC team and each of the Commodores’ last 13 conference losses. With Davis as a key leader, Vanderbilt hasn’t backed down from the challenge. In fact, the team has mounted a two-game SEC winning streak, beating a ranked Kentucky team on the road and Florida for the first time since 2013. 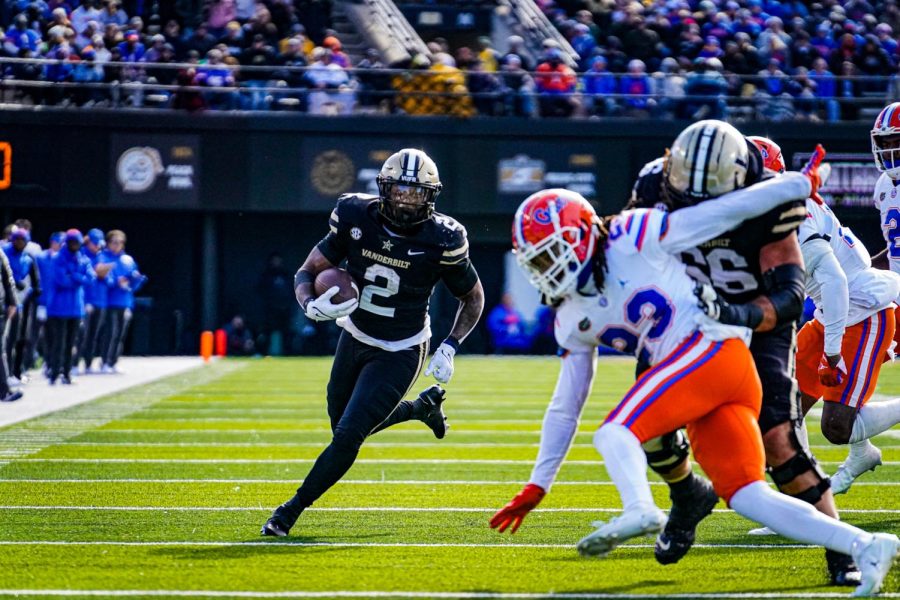 “We can compete. I think the difference from the team last year to this year is that we got a lot of fight in the guys,” Davis remarked. “Guys are going all the way to the end. When adversity hits, guys aren’t hanging their heads. They keep going, they keep fighting.”

Reflecting on this season and his career as a whole, Davis expressed what an emotional journey it has been. From bursting onto the scene as a freshman at Temple to preparing for what could be his final game at FirstBank Stadium on Saturday against Tennessee, Davis is thankful for the roller coaster ride.

“It’s gonna be a lot of emotions [on Saturday],” Davis said. “The Vanderbilt community is my family. From the staff, to the teachers, to the students here: Those people are my family, and it’s going to be hard for me to want to leave those guys.”

The Vanderbilt Hustler welcomes and encourages readers to engage with content and express opinions through the comment sections on our website and social media platforms. The Hustler reserves the right to remove comments that contain vulgarity, hate speech, personal attacks or that appear to be spam, commercial promotion or impersonation. The comment sections are moderated by our Editor-in-Chief, Rachael Perrotta, and our Social Media Director, Chloe Postlewaite. You can reach them at [email protected] and [email protected]
All The Vanderbilt Hustler picks Reader picks Sort: Newest
Subscribe
Login
2 Comments
Newest
Oldest Most Voted
Inline Feedbacks
View all comments
W
W. Larry Summar

What a fun guy to watch. Maybe a step slower than Vaughn but much stronger body. How` anyone could say that he can’t play in the SEC,man. Pleae come back for your covid year.

Great profile! Hey Ray, thanks for your dedication… you are coming back for another season, right?!