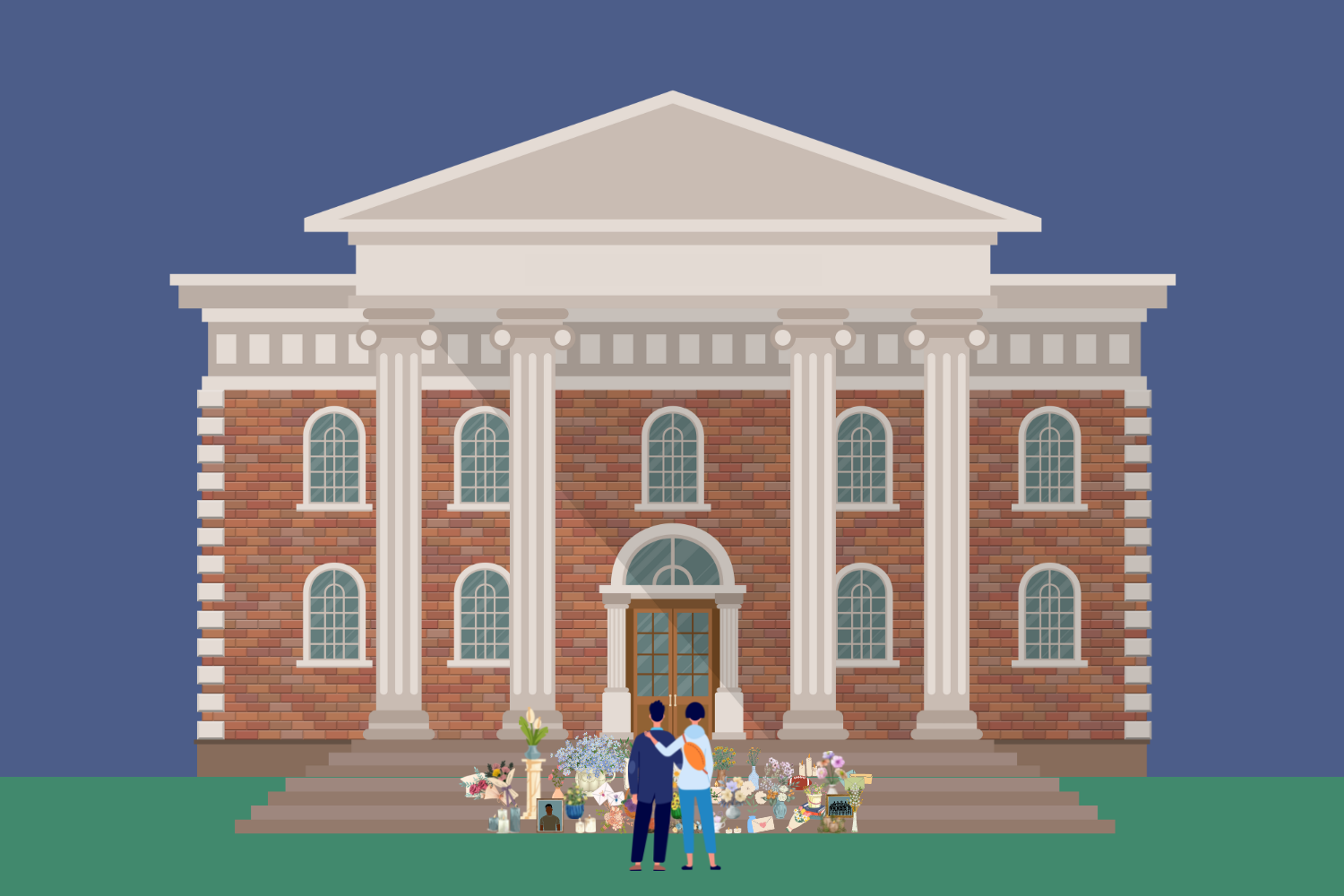 Colleges are supposed to be safe spaces for growth. The shooting at the University of Virginia shows that they are increasingly becoming sites of violence and fear.

I’m sitting in a Mayborn classroom listening to a guest speaker, a retired Navy SEAL, talk about toughness. Toughness, he tells the audience, is the ability to act under intense pressure. He tells us about the harsh training Navy SEALs go through, the strict procedures they follow and, of course, the terrifying combat situations in which they are placed. It’s a fascinating and well-delivered presentation. As he discusses military reconnaissance, though, I can’t help but be distracted by a little reconnaissance of my own. Two glass doors. One security camera. Several windows. Desks too small for even a toddler to hide under. My heart races a little faster with each feature I notice. A sense of dread grips me by the throat. I’m in a college classroom, but I feel like I’m in a foxhole.

The Nov. 14 shooting at the University of Virginia shook the nation. The rampage, which killed three football players and wounded two unidentified victims, sent students scrambling for safety. UVA’s campus entered a 12-hour shelter-in-place order that left students stranded in libraries and classroom buildings. It’s a scene both shocking and all too familiar to the millions of American students who have learned that even campus gates can’t protect them from our country’s dangerous gun violence epidemic. According to the National Center for Education Statistics, there were 93 casualty-causing shootings in K-12 schools in the U.S. during the 2021-22 school year. Between 2001 and 2016, 190 shootings took place on college campuses. Over two million college students attending more than 140 universities were exposed to gun violence on the campuses they call home. With such harrowing statistics, U.S. educational institutions are looking a lot less like schools and a lot more like slaughterhouses.

Two glass doors. One security camera. Several windows. Desks too small for even a toddler to hide under. My heart races a little faster with each feature I notice. A sense of dread grips me by the throat. I’m in a college classroom, but I feel like I’m in a foxhole.”

Strolling around Vanderbilt’s campus, I can’t help but imagine one of these incidents occurring here. Tennessee has some of the most relaxed gun laws in the country; it does not require private sellers to perform background checks on customers. Perhaps even more egregiously, state legislators removed all permit requirements for carrying a firearm last year. Anyone over 21, with the exception of some convicted criminals or institutionalized individuals, may carry a gun—concealed or not—on public Tennessee property. Such laws are dangerous because they allow easy access to deadly weapons and normalize a culture of mass gun ownership that further perpetuates violence. Vanderbilt community members must campaign to have these laws changed. While Vanderbilt bans the possession of firearms on campus, the prevalence of guns in our immediate area poses a threat both to students and other Nashville residents. We have a duty to use our voices to protect ourselves and others from irresponsible government policies that could kill.

Campaigning for stricter gun regulation, however, won’t solely solve the problem of school shootings. Gun violence is more than committing a crime. A school shooter spilling the blood of their peers is a pure disregard for humanity. We must try our hardest to make sure nobody is capable of committing such atrocities as the one committed at UVA. This aspiration means increasing affordable mental healthcare access countrywide and extending mental health resources to include those not yet given a formal diagnosis. Perpetrators’ preexisting psychiatric conditions are often blamed for school shootings, but psychologists believe that personal circumstances including interpersonal conflict and substance use are much more reliable predictors of these massacres. Our country must embrace open discussion of personal struggles and normalize seeking psychological treatment if we hope to prevent these tragedies. While difficult life circumstances are by no means an excuse for committing a school shooting, we need to acknowledge that people don’t commit these heinous acts randomly but rather out of pain and anger. Providing these people with the tools they need to cope with negative feelings healthily is essential to preventing them from committing violence.

Vanderbilt students are lucky enough to have access to a robust emergency alert system, but do we know what to do if notified of an active shooter?”

Before those changes are institutionalized, though, we need to be prepared in case the unthinkable happens. Administrators should provide students with extensive crisis training so that we are prepared to protect ourselves in the event of a school shooting. Vanderbilt students are lucky enough to have access to a robust emergency alert system, but do we know what to do if notified of an active shooter? Students need to be taught through drills how to hide from, escape from, and if necessary defend themselves from shooters. Many American K-12 schools offer such training, and it’s important that this preparation continues into post-secondary education, especially given some international and home-schooled students may not have had the same training. These drills have downsides; they can stoke panic and force survivors to relive past traumas. The pros of active shooter drills, however, far outweigh the cons. To limit potential negative effects, students should be provided with information about how drills will be conducted and given access to resources like counseling services. Active shooter training should be mandatory for everyone at Vanderbilt. Our lives might depend on it.

Students shouldn’t have to worry about being tough on campus, like those Navy SEALs about whom I learned. We spend our formative years at college growing and developing under controlled, secure circumstances. Lately, however, campuses across the U.S. have become scenes of abject horror. With every armored vehicle parked by a soccer field, every SWAT team scattered across a university lawn and every helicopter hovering atop a once silent library, U.S. campuses are increasingly becoming like warzones. We cannot tolerate this terrible violence any longer.

The Vanderbilt Hustler welcomes and encourages readers to engage with content and express opinions through the comment sections on our website and social media platforms. The Hustler reserves the right to remove comments that contain vulgarity, hate speech, personal attacks or that appear to be spam, commercial promotion or impersonation. The comment sections are moderated by our Editor-in-Chief, Rachael Perrotta, and our Social Media Director, Chloe Postlewaite. You can reach them at [email protected] and [email protected]
All The Vanderbilt Hustler picks Reader picks Sort: Newest
Subscribe
Login
1 Comment
Newest
Oldest Most Voted
Inline Feedbacks
View all comments
S
Steve

Not to dismiss the horror of campus violence, however I’d urge students to take a step back and consider how your life would be if you tried to train for, or otherwise protect yourself against, every threat, perceived or real. If you did, you would never drive, for example–there are far, far more student deaths in cars than via gun violence. The issue of avoiding gun violence on campus is very much like what students are doing right now by no longer being concerned at all, or very much, about COVID despite spikes in infection rates from time to time. You COULD wear a mask everywhere and social distance because that would all but eliminate any risk, however small. But few college students do that. They’ve decided the inconvenience of protection, and the stress of worrying about COVID, just aren’t worth it. The fear of campus gun violence is the same. The odds are infinitesimal that any student will be shot on a campus. No, the odds are less than infitesimal–much, much, much lower than the odds of dying from COVID (or in a car). But with hundreds of media outlets and social media reporting every single campus shooting, fears get unnecessarily ramped up. It FEELS like campuses everywhere are under attack. Not so. Take a deep breath, consider the odds, and try to put gun violence out of your mind. (Or better yet, spend your time advocating for strict gun laws.)