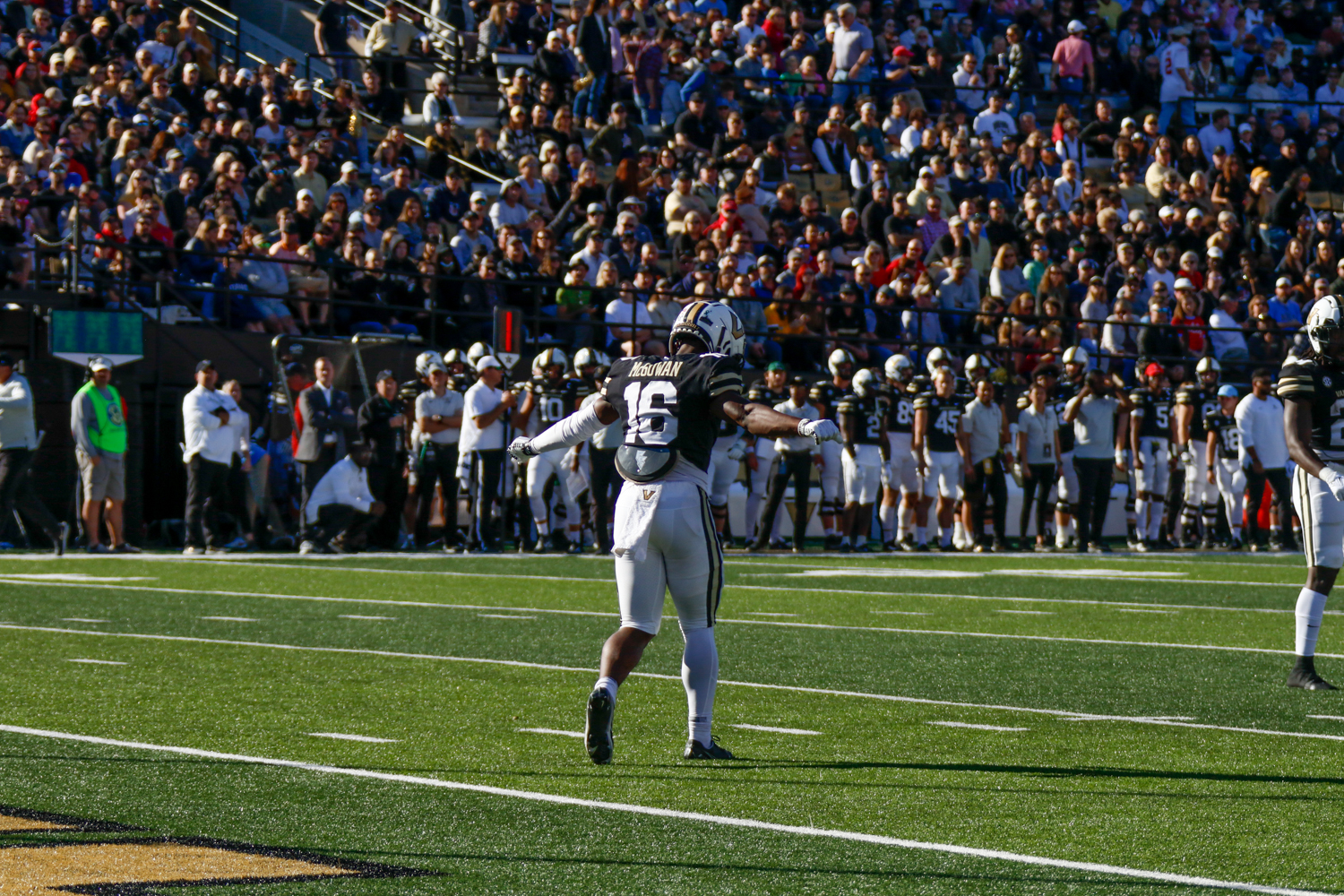 Jayden McGowan warms up to recieve, as photographed on Oct. 8, 2022. (Hustler Multimedia/Barrie Barto)

Jayden McGowan blazes toward Freshman All-American campaign: ‘I want to be the best in the country’

Just six games into his Vanderbilt career, Jayden McGowan has completely reshaped the Vanderbilt offense and captured the attention of Commodore fans everywhere.

Six days of the week, Jayden McGowan is just a normal Vanderbilt student. He works tirelessly to earn good grades, loves his Introduction to Sociology class and enjoyed dinners at McDougal’s (before it burned down). On Saturdays, however, McGowan is anything but ordinary. Through six weeks, he has already compiled a highlight reel of runs and receptions, earning him SEC Freshman of the Week and the sixth most receiving yards in the SEC. His electrifying speed and ability to make defenders miss have already taken Vanderbilt fans by storm—and soon, the rest of the country.

Growing up, McGowan’s best friend was his older brother Darius Harvey. The two shared an incredibly close relationship, and McGowan modeled much of his behavior after Harvey. Consequently, when Harvey committed to play college football, McGowan decided that he had to do the same.

“I wasn’t like, ‘Maybe I can go to college for free for [football]’ until I was in sixth grade, because that’s when my brother went to college,” McGowan said.

Fortunately, Harvey had helped McGowan develop a solid skillset that would allow him to follow those dreams. Although they were six years apart in age, the pair spent hours playing and watching football together throughout their childhood. Learning from his brother helped McGowan master the ins and outs of the game long before many of his classmates.

Playing a number of other sports also helped McGowan’s growth as a football player. Growing up, he played both baseball and basketball, and when he entered high school, he joined the track team. This combination of sports aided in his development of the rare speed, vision and hand-eye coordination that have led him to high levels of success at Vanderbilt. While he has never been the biggest player on the field, McGowan has been able to find ways to beat defenders who are bigger than him thanks to his quick feet and strong hands.

“Earl Bennett, one of the Vanderbilt alumni, always says that my superpower is my feet and my speed,” McGowan said. “So I make them use their feet because taller corners don’t have the best feet.”

Through playing sports in high school, McGowan also learned valuable mental skills that he could apply on the football field—most notably, resilience.

“Really pushing myself to get better at those sports taught me how to motivate myself,” McGowan said. “If I wasn’t good at something, I was going to work at it as hard as possible, and as long as possible just to get good.”

Given all of his tools, it’s a bit baffling that McGowan received little recruiting interest until his senior year of high school. Fortunately, one of the schools that reached out was Vanderbilt.

McGowan admitted that prior to being recruited, he knew very little about Vanderbilt. When the coaches contacted him, he consulted his cousin, Thomas Jones, who was committed to Vanderbilt to play baseball in 2016 but ended up signing with the Marlins instead. Jones spoke very highly of the opportunities at the school and, after taking an official visit, McGowan knew that Vanderbilt would be a great fit. Moreover, McGowan stated that head coach Clark Lea made a strong impression on him throughout the recruiting process.

“I thought it was too good to be true,” McGowan said. “This dude is always nice. He [was] always checking up on me seeing how I [was] feeling.”

McGowan’s relationship with Lea has been one of the most important parts of his Vanderbilt experience. While Lea usually works with the defense, McGowan explained that Lea takes time throughout his day to make sure all of his players, including those on offense, are doing well mentally and physically.

“He just cares about his players a lot,” McGowan said. “He’s helped me, he’s motivated me, just telling me to keep going… I ‘haven’t arrived’ is what he says.”

While Lea may say that McGowan’s true potential has yet to reveal itself, his performances on the field beg to differ. After putting up 56 scrimmage yards against Hawaii, the freshman broke out in Vanderbilt’s first home game of the season. On 3rd and 10 from Vanderbilt’s own 25-yard line, McGowan sped past Elon cornerback Jaidyn Denis and hauled in a beautiful pass from Mike Wright, taking it 75 yards for the touchdown.

The effort caught the attention of both the Commodore faithful and the SEC, who named him their Freshman of the Week. But even after recording 118 yards and a touchdown, McGowan still wasn’t satisfied.

“It wasn’t as impressive to me as everyone else made it seem to be,” McGowan said. “My expectations for myself have always been super high… [so] I just wanted to keep going and just progress off of that.”

McGowan has done just that, recording 20 catches for 235 yards in the four games since then. Thirty-six of those yards came last week, when he caught a screen pass and shook two Ole Miss defenders, finding his way into the endzone for his second touchdown of the year. The play highlighted that McGowan’s strengths go beyond his blazing speed.

“I’m very aggressive with the ball in my hands, I try to fight for extra yards,” McGowan said. “I take a lot of pride in not going out of bounds when I’m running down the sideline.”

Interestingly enough, McGowan’s increase in involvement has coincided with fellow freshman AJ Swann taking over at quarterback. The two have already linked up 18 times in the three and a half games they have played together, illustrating a strong passing connection that McGowan attributes to the bond they have established off the field.

“We came on our official visit at the same time, and AJ and I have been best friends since then,” McGowan said. “So I think that builds our relationship on the field.”

The mentorship of some of the veteran players on the team has also played a role in McGowan’s continued growth. In addition to Mike Wright, who took him out to practice just two days after he arrived on campus last winter, McGowan has grown very close to fellow wide receivers Will Sheppard and Quincy Skinner.

“They’ve been like an extra set of receiver coaches,” McGowan said. “They’ve really helped me develop into the wide receiver I want to be.”

The biggest tool with which they have helped McGowan is his route running, which McGowan admits was not where it needed to be when he first got to campus. Through work with them and with the coaching staff, McGowan has developed various techniques to hide what route he is running from defenders.

“When I got here and we had our first practice, I was like, ‘Why is he guarding this route so perfectly? Why am I getting locked up on these plays?’” McGowan said. “[Since then] I’ve just gotten rid of a lot of indicators… My ability to get open has been a lot better since I first got here.”

However, from expanding his route arsenal to finding ways to contribute without the ball in his hands, McGowan knows that he still has a lot of work to do to become a complete wide receiver. Fortunately, he believes Vanderbilt is the perfect place to continue his evolution.

Throughout the next four years, McGowan will have to make sure no box goes unchecked if he is going to achieve his ultimate goal.

“I want to be the best in the country,” he said.

The Vanderbilt Hustler welcomes and encourages readers to engage with content and express opinions through the comment sections on our website and social media platforms. The Hustler reserves the right to remove comments that contain vulgarity, hate speech, personal attacks or that appear to be spam, commercial promotion or impersonation. The comment sections are moderated by our Editor-in-Chief, Rachael Perrotta, and our Social Media Director, Chloe Postlewaite. You can reach them at [email protected] and [email protected]
All The Vanderbilt Hustler picks Reader picks Sort: Newest
Subscribe
Login
1 Comment
Newest
Oldest Most Voted
Inline Feedbacks
View all comments
S
SFR

What a great article, Luke! It sounds like this player has a lot of promise. I look forward to hearing more about his football sucess at Vanderbilt.