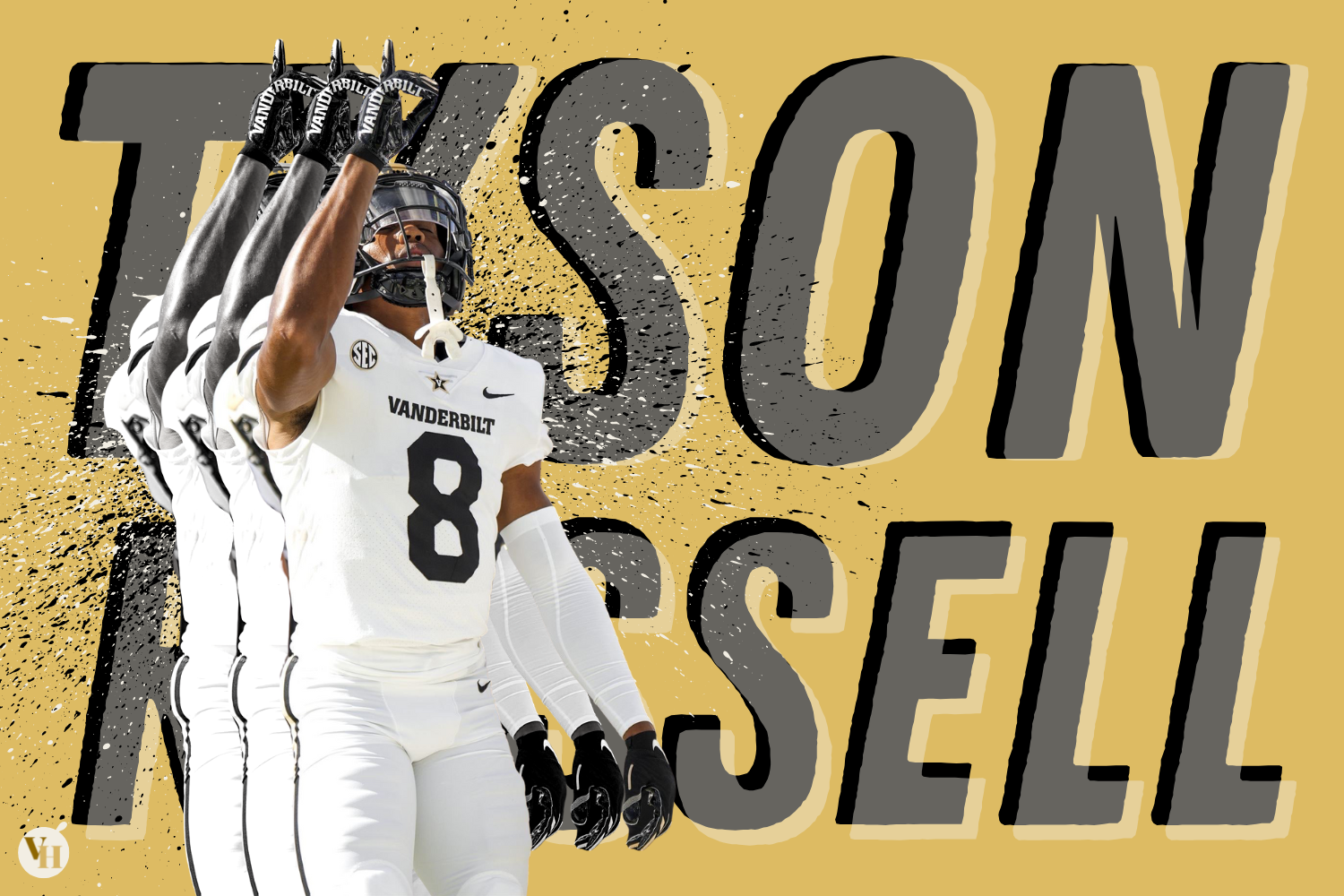 Tyson Russell has broken into the starting lineup in 2022 thanks to his formative prep days. (Hustler Multimedia/Alexa White) (Alexa White)

Tyson Russell has broken into the starting lineup in 2022 thanks to his formative prep days. (Hustler Multimedia/Alexa White)

Powered by friends, family and an undeniable love for the game, Tyson Russell has elevated himself to the brightest stage in college football.

For Tyson Russell, the genesis of his journey to the gridiron started with an unexpected challenge: reading 100 books.

Russell’s dad, Twan, was a linebacker at the University of Miami and in the NFL. While one might assume that, as the son of a professional football player, Russell would have a chance to toss on the pads at a young age, his father decided differently.

“I really had to beg [my dad] to play football,” Russell told The Hustler. “When I was younger, he was like, ‘We’re going to wait.’”

When Russell reached the age of 10, Twan came to him with a proposition. He told Russell that if he wanted to get the chance to step on the field, he had to read 100 books in a year. Twan wanted to see his son prove that he really wanted to play and better himself academically in the process.

“If you really love it, you’ll read 100 books,” Russell remembers his dad saying.

Russell—eager to strap on the pads—tried his hand at the large task in front of him. He quickly realized that it would not be an easy one, nor one that he would be able to succeed at on his first attempt.

“I quit the first and the second time. The third time, I was like, alright, I’ll do it. I ended up reading the 100 books and getting to play,” reflected Russell.

One thing was guaranteed by the time Russell laced up the cleats and walked onto the turf: He had proved both to his dad and to himself that he really wanted to be there.

This acute and undeniable desire to play football translated to Russell’s performance on the field, as he dominated Pop Warner en-route to becoming a three-year letterman at St. Thomas Aquinas High School (STA), a perennial football powerhouse in Fort Lauderdale, Florida.

Still, Russell’s family ensured that his education never took a backseat to football. His mom, Lysandra, became one of his primary educators.

“I did a homeschool program where I was in class for two or three days out of the week and the other two days or so I was at home. My mom was very involved in my education. She’s taught me a lot,” said Russell.

Meanwhile, the quality of football Russell was exposed to at STA elevated his game to new heights.

“It was a lot of fun football wise. There was a lot of competition everyday. Just going against a lot of guys who are going to play on the same level as you in college,” Russell said.

Given the prestige of STA, it wasn’t uncommon to be lining up opposite players that would take their career even further than college.

“I remember at St. Thomas, I was on the scout team my freshman year. I had to cover Elijah Moore. I really saw how good his route running was. I remember going up against him on the scout team as a freshman and seeing how he worked and attacked everyday. That was pretty cool,” Russell reflected.

Moore, a second round NFL selection out of Ole Miss in 2021, posted 538 yards and 6 total touchdowns in his rookie season with the New York Jets. In short, Russell has known nothing but fierce competition since his STA days.

By the time Russell was a junior at STA, the team was firing on all cylinders. The STA Raiders captured their 11th state championship in school history with a 28-23 win over Edgewater in 2019.

The Raiders came back just as strong in 2020, only losing one game in the regular season and cruising into the state tournament. In the Raiders’ semifinal game against Bloomingdale, Russell was named MaxPreps’s Defensive Player of the Game as he propelled his team to their third consecutive appearance in the championship game. In the championship game, the Raiders once again took on Edgewater and prevailed 31-21. With the win, Russell joined an elite club of STA players: those who won two state championships in their time at the school.

When it was time to make the move up to Nashville, Russell found comfort in the fact that he wasn’t doing it alone: fellow Raiders Gunnar Hansen and Quincy Skinner Jr. were coming with him from Fort Lauderdale.

“Transition wise, it’s been easy because we are close together. Anything we need, we can always go to each other for help. On the field, I know Gunnar’s a big competitor. Off the field, we always just laugh and joke, but he’s competitive in everything he does,” Russell said. “And then Quincy, we played against each other in youth football. I’ve known Quincy for a long time. [I] competed against him everyday at practice in high school.”

Even with his friends at his side, Russell discovered that the jump to the next level is never seamless.

“I remember I had a rough spring game. I ended up not knowing if I was going to redshirt or not,” Russell reflected.

Just like many times before, though, his devotion to the game paid off. Russell ended up appearing in eight games in 2021, including making a season-best four tackles against Mississippi State.

This year, newly minted defensive coordinator Nick Howell has entrusted Russell at the boundary corner position, starting the sophomore in all five of Vanderbilt’s contests. Russell’s game has made a significant jump with the increased playing time: the Florida native has already racked up 17 tackles, two more than his season total from last year and good enough for third on the team thus far.

“[The biggest difference is] being in the system one more year and understanding the playbook a lot better,” Russell said. “I’m able to play faster than I did last year, but I’m still continuing to improve in that area. I still have a lot of things that I see that I have to work on.”

“Coach Lea always talks about reaching our highest level. That’s been our focus all year. That’s the goal,” Russell explained. “It starts individually, and then, as a team, it will all come together.”

No matter how high he climbs, Russell will always be guided by his unrelenting love for the game.

“The biggest thing is confidence. No matter what, a cornerback has to be confident that when he steps on the field, he’s the best guy,” Russell said. “At corner, you have to have great technique, but I think you have to kind of be a dog on the field. You might have times where you get beat or situations where you mess up, but the ability to go back, flesh out what just happened and be able to focus on the next play—that makes you a great corner.”

Prepared with a strong education both on and off the field, a surplus of talent and a supportive group of people around him, the sky is truly the limit for Russell. If he stays poised, perhaps one day, a kid looking to prove to their parents that they want to play football will do so in the form of reading a book about Tyson Russell.

The Vanderbilt Hustler welcomes and encourages readers to engage with content and express opinions through the comment sections on our website and social media platforms. The Hustler reserves the right to remove comments that contain vulgarity, hate speech, personal attacks or that appear to be spam, commercial promotion or impersonation. The comment sections are moderated by our Editor-in-Chief, Rachael Perrotta, and our Social Media Director, Chloe Postlewaite. You can reach them at [email protected] and [email protected]
All The Vanderbilt Hustler picks Reader picks Sort: Newest
Subscribe
Login
3 Comments
Newest
Oldest Most Voted
Inline Feedbacks
View all comments
G
George Case

I was one of those dads who helped on his first pee-wee team. I’ll always remember him as a friendly and polite young man who could run like the wind. Always had a big smile for coaches and teammates.

Awesome Job!! Your father must be very proud of you!! Your STA family is cheering for you!!

Such a great story!!! Great rep for other Vandy kids from STA. Pride on A!!!!