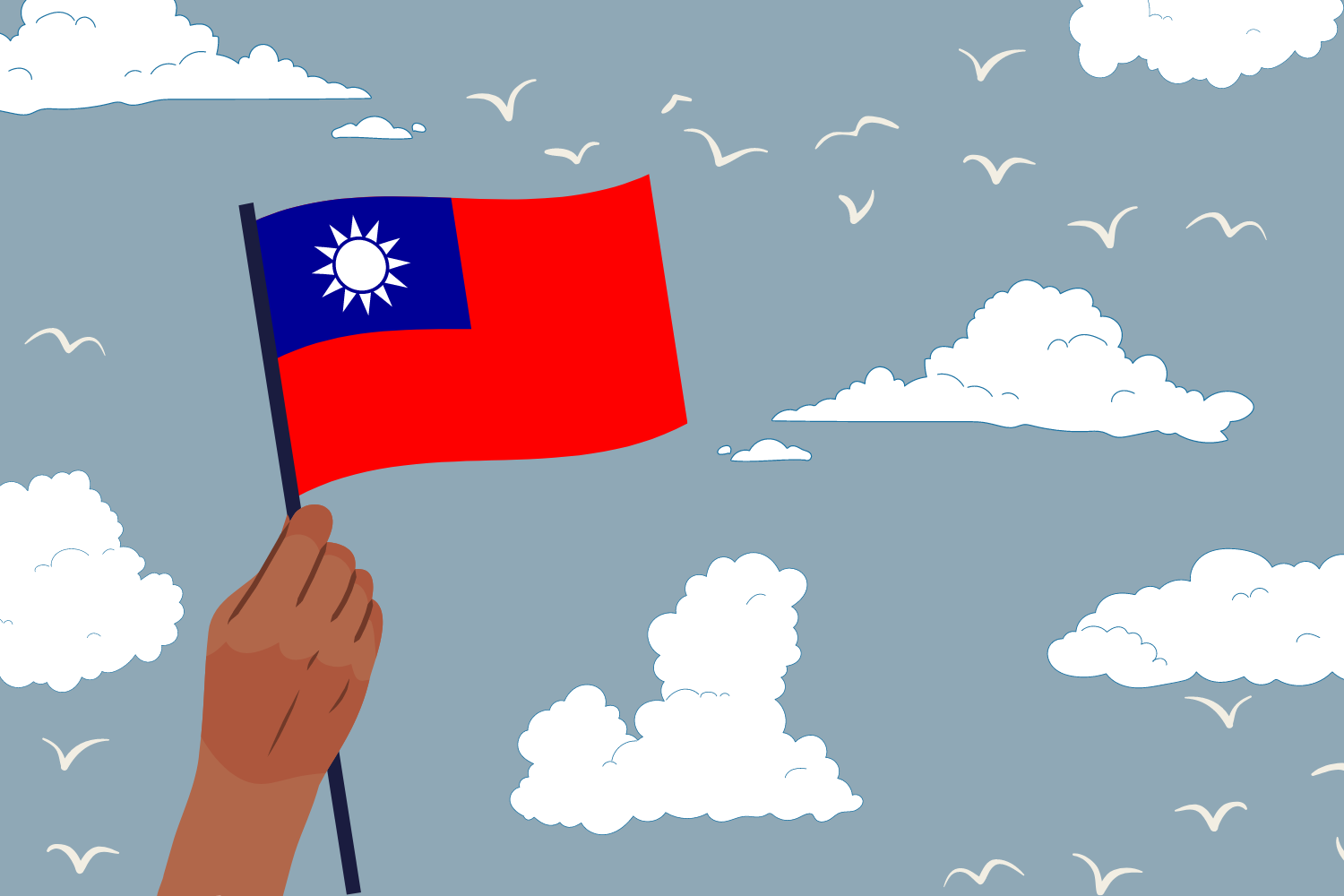 Taiwanese flag being held in the sky. (Hustler Multimedia/Alexa White)

As news coverage strays from the Laguna Woods shooting, the rubble left by this incident remains. I am obligated to help pick up the pieces.

In Taiwanese tradition, you treat those from your community as family.

You go out of your way to support them through thick and thin. Taiwanese people will bring celebratory pineapple cakes for the holidays and will bring you sticky rice and tissues during finals week. This tradition and sense of community leave every member of the Taiwanese family still grieving for our “relatives” at the Geneva Presbyterian Church in Laguna Woods. On May 15, we lost a family member, Dr. John Cheng, a beloved and valued physician who threw himself in front of a shooter to block his line of fire.

Many of my family and friends are parishioners at Geneva Presbyterian Church, making this tragedy deeply personal to me. My Asian auntie welcomed the shooter with open arms and shook his hand that day, not knowing he was plotting to kill.

As news coverage strays from the Laguna Woods shooting, the rubble left by this incident remains. I am obligated to help pick up the pieces. To not speak out is to let Cheng’s death be in vain. Until we address the influence of China’s “one nation” propaganda, these violent events will continue to harm the Taiwanese community. We must approach this shooting as a symptom of a much larger problem: the presence of politically-motivated hate against the Taiwanese community brought on by China and the lack of education in the U.S. about Taiwan. Merely 34% of U.S. voters can locate Taiwan on a map. Moreover, Vanderbilt doesn’t even have a class dedicated to Taiwanese history or culture listed in its Asian Studies course offerings.

For some historical context, the 1895 Treaty of Shimonoseki gave Japan colonial rule of Taiwan from China’s Qing Dynasty. After World War II and China’s communist revolution, the Republic of China (ROC), Taiwan’s governing body, relocated from China to Taiwan in 1949. Supporters of Taiwan’s independence also claim that the treaty formally separated Taiwan from China, and the establishment of the ROC and China’s People’s Republic of China furthered the separation of Taiwan from China as two independent systems of government. These technicalities are the primary reasons why Taiwan considers itself an independent nation. However, China believes that Taiwan is not independent because the ROC was the ruling system of government in China before the communist revolution.

Taiwanese independence is incredibly important to Taiwan and Taiwanese Americans like me. Taiwanese high school seniors have no country to mark on their Common App demographics page. People are ceasing to speak Taiwanese, opting for the more widely known Mandarin. Many consider Tawainese Americans as Chinese Americans and claim that Taiwan is not independent. My history is being erased before my eyes. Until our society stands by Taiwan, millions of people—including my grandparents, uncles, aunts and cousins—will live in continual fear of Chinese invasion.

In the past year, we have seen advances in our justice system; Asian hate and racism are widely publicized. This momentum cannot and must not be deterred; the time for change is right now. Only a few years ago, the Laguna Woods shooting would hardly be recognized as a hate crime or even gain media coverage for that matter. Today, we’re at least afforded some closure and peace due to the shooting being classified as such.

My Asian auntie welcomed the shooter with open arms and shook his hand that day, not knowing he was plotting to kill.”

You might be asking yourself: How am I supposed to solve such an entangled global conflict? In the classroom, engage in conversation and question the narrative of China and Taiwan’s tension and history. Beyond the classroom, the Vanderbilt community can support the Taiwanese community by advocating for pro-Taiwanese legislation, such as asking Senators and House Representatives to cosponsor House Bill (HB) 3634: Taiwan Diplomatic Review Act and Senate Bill (SB) 3735: Deterring Communist Chinese Aggression against Taiwan through Financial Sanction Act of 2022. These bills call for strengthening diplomatic ties with Taiwan and imposing sanctions on Chinese citizens who engage in armed aggression against Taiwan. You can also support us by learning about our rich history and democracy by tuning into the news, taking classes about Asian and Taiwanese culture and celebrating our traditions, like eating mooncake (月餅) during the Mid-Autumn Festival (中秋節) and assembling homemade dumplings (餃子) during Chinese New Year (春節).

Extremism cannot be tolerated. Please do not wait until you experience something similar to the Taiwanese community’s pain to advocate for a better society. By then, the damage is done. This country—and Vanderbilt—comprise people from all walks of life who must be protected and respected and, to do so, we must be recognized as equal and independent.

我們需要保護我們的鄰居. (We need to protect our neighbors.)

The Vanderbilt Hustler welcomes and encourages readers to engage with content and express opinions through the comment sections on our website and social media platforms. The Hustler reserves the right to remove comments that contain vulgarity, hate speech, personal attacks or that appear to be spam, commercial promotion or impersonation. The comment sections are moderated by our Editor-in-Chief, Rachael Perrotta, and our Social Media Director, Chloe Postlewaite. You can reach them at [email protected] and [email protected]
All The Vanderbilt Hustler picks Reader picks Sort: Newest
Subscribe
Login
4 Comments
Newest
Oldest Most Voted
Inline Feedbacks
View all comments
C
Chinese4life

I thought mooncakes and dumplings are part of Chinese culture?? as well as other asian cultures, but not special to Taiwan. This post makes me mad, as it seems to blame the Chinese.

It’s not clear to me how connected the Laguna Woods shooting is to anti-Taiwanese hate from China, or at least hate from the People’s Republic of China.

If I understand correctly, the shooter, David Chou, was a waishengren born and raised in Taiwan. He grew up in the 60s and 70s, so I can imagine that he was more influenced by the Kuomintang’s pro-unification propaganda than by that of the mainland Communist Party. It seems that even after immigrating to the U.S., Chou still largely interacted with other Taiwanese.

My point here is that I’m not really sure if Chou’s radical, violent beliefs have anything to do with PRC ideology or aggression. This was an anti-Taiwanese hate crime committed by a Taiwanese, albeit one that preferred to identify as Chinese.

I’m under the impression that deep-blue political rhetoric in Taiwan can be just as anti-independence and pro-unification as PRC rhetoric. Does it not seem likely that Chou was more strongly influenced by the former rather than the latter?

I don’t mean to downplay the issue of PRC aggression towards Taiwan; I just think it is a separate concern from Laguna Woods.

I completely agree with your assessment Darwin. There is no evidence that the shooter David Chou was influenced by China. News reports from the Las Vegas review journal stated that he was suffering from mental illness due to his ailing financial situation and unfortunate attack from his tenants that left his skull fractured.

A small minority does not represent the majority. Huang should not be blaming China for this incident or claiming the “presence of politically-motivated hate against the Taiwanese community brought on by China and the lack of education in the U.S. about Taiwan.” Seek to work together and have constructive conversations rather than blaming the Chinese for all the problems