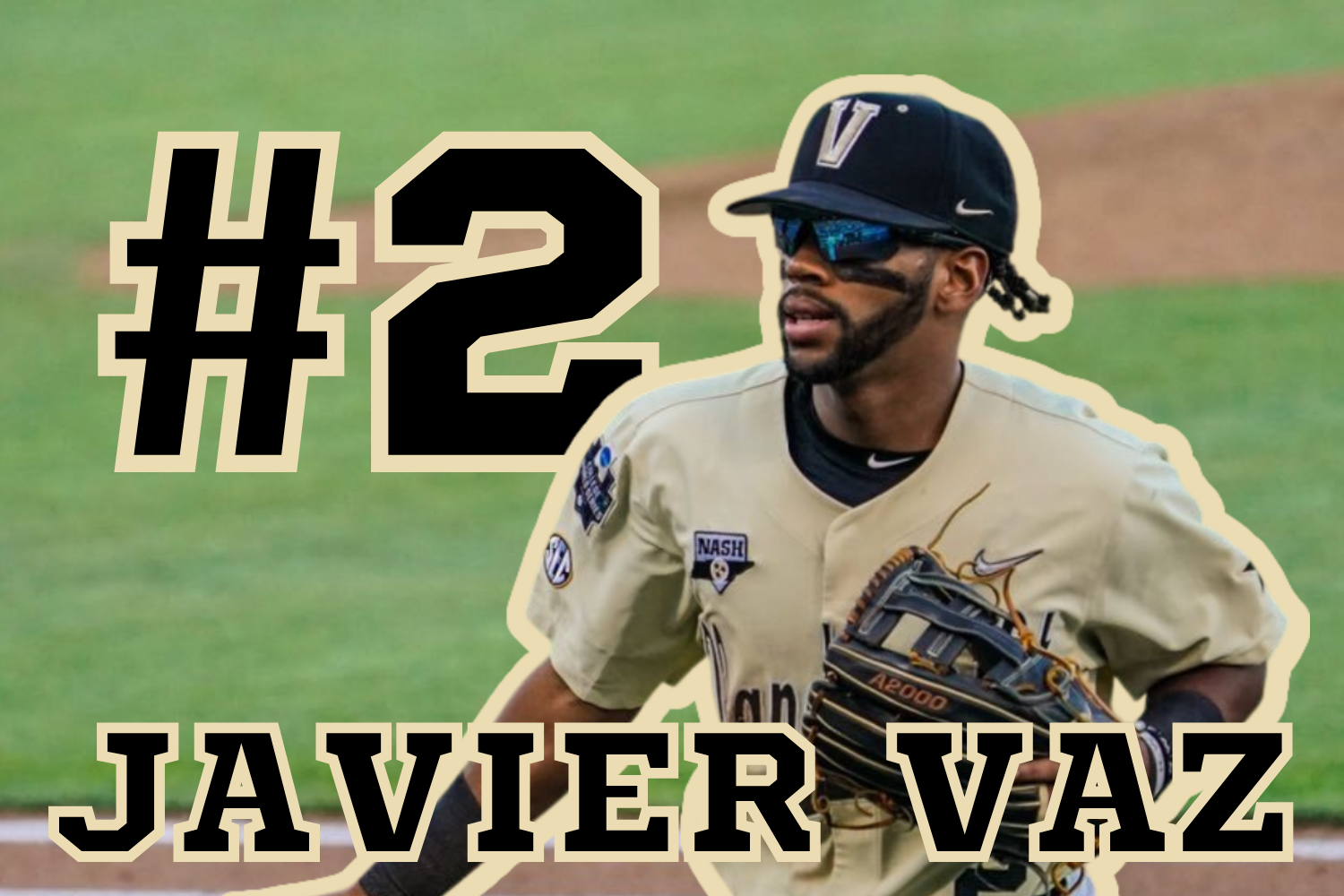 Javier Vaz gives out a high-five as he jogs off the field. (Hustler Multimedia/Alexa White) (Alexa White)

Javier Vaz gives out a high-five as he jogs off the field. (Hustler Multimedia/Alexa White)

Javier Vaz: From JUCO to the College World Series

Javier Vaz’s path to Vanderbilt was certainly not typical; however, it provided him with experience and perspective that he’s used to help lead this VandyBoys team.

Junior college (JUCO) athletes can’t always make the jump to a four-year college, whether for skill or academic reasons. In fact, only around half of JUCO baseball players make it to the Division I level at all and very few of those end up at a prestigious university that also happens to sit atop college baseball.

Javier Vaz is one of the few. He bridged the gap between LSU Eunice Junior College and Vanderbilt and excelled at both schools. He batted .364 in his first season at Eunice in 2019 to help the Bengals reach a 51-8 record and a Region 23 Championship. For his performance, Vaz garnered preseason All-American accolades before the 2020 season, a spring that was cut short due to COVID-19. Still, he was already batting .365 with 23 stolen bases and 13 RBIs when the season was canceled.

“The transition from JUCO to here was, I would say, awakening,” Vaz told The Hustler. “The skill and talent level of the guys here is definitely better.”

Vaz knew that he would have an uphill battle to even see the field in his first season on West End. But, instead of growing impatient, he focused on finding a role and remaining motivated.

“I had a feeling that I wasn’t going to play much,” Vaz said. “So, I just planned to remain patient and keep working—put my head down and work and be a good teammate. That’s all I could do: just really be the best teammate I could be until my opportunity was presented.”

Vaz didn’t see a multiple at-bat game until May 28, 2021, in a matchup against Ole Miss. However, he took full advantage of his opportunity, collecting his first SEC hit and score in two plate appearances. After that performance, head coach Tim Corbin gave him more chances to make an impact.

Given his late entrance to the starting lineup, Vaz was pushed almost immediately into postseason play; yet, he said that weight didn’t add any tension to his game.

“I didn’t feel much pressure because I worked for it,” Vaz said. “I felt like I earned it. I felt like I belonged. I was just another piece to the puzzle of our team. I was just trying to do anything I could to help the squad win.”

Vaz continued to impress throughout the College World Series, making big plays when it really counted. Facing elimination against Stanford, Vaz and the Commodores were one out away from leaving Omaha. The outfielder had already saved a run or two in the second inning with a valuable catch in the field, but now he was down 1-2 in the count with the hopes of his team riding on his back. Vaz didn’t panic. He took three balls in a row and earned a walk to keep Vanderbilt’s hopes alive. His patience was rewarded, as Spencer Jones’s infield single forced an error from Stanford’s shortstop and allowed Vaz to leg out a potential game-ending play, ultimately ending up on third base due to the mistake. He would then score on an Enrique Bradfield Jr. single, serving as the tying run in the 5-5 contest. The rest is history. Stanford pitcher Brendan Beck sailed a pitch over his catcher’s head, and Jones took home to cap the VandyBoys’ walk-off win.

The very next game, Vaz helped the Commodores survive once again by beating NC State, 3-1. He went 1-of-3 at the plate but had two walks, two stolen bases and a run to accompany his single. These clutch performances, among others, made Vaz an invaluable member of the eventual national runner-up side during an unforgettable playoff push.

For his Vanderbilt career, Vaz holds a capable .250 batting average, but the outfielder often makes his presence felt most on the base path and out in the field.

“I’m always trying to find a way to help the team win, whether it’s on the bases or defensively,” Vaz said. “I just want to cause chaos on the bases [and] get the pitcher more focused on me than the hitter.”

With this mentality, Vaz asserted himself as a leader on this year’s Vanderbilt squad. This is not a surprise, considering the attitude with which he approaches the game.

“Our mentality is day by day—keep working, get 1% better every day,” Vaz said. “We’re focused on right now.”

Despite only holding four multiple at-bat SEC games—three of which came during the College World Series finals—entering this season, Vaz still possessed more college experience than most of the current Commodores, with the 2022 season being his fourth year playing collegiate ball. His winning ways at both Eunice and Vanderbilt and personal goals for this season will surely help propel this young team through difficult situations.

This is the true measure of success for Vaz—the camaraderie and leadership you don’t see on the field. The senior prioritizes helping those around him and putting the team before himself to achieve gains for the program. Truly, this is his favorite part of Vanderbilt: his teammates.

“[I love] being around my team, like, not in a baseball setting.” Vaz said. “[I love] going to lunch with the guys, spending as much time with them [as possible]. That’s my favorite part. I look at them as brothers more than just my teammates.”

The VandyBoys have had extreme highs—see their 18-game win streak—and lows—see the Tennessee series—this season. However, the one aspect of the program that has always held true is the spirit of the players. Corbin has always emphasized teamwork and unity, and Vaz represents both of these ideals as a personification of the adage, “side before self.”

His story of perseverance should inspire young players to continue following their path, no matter how winding it is, because it might just lead you exactly where you’re meant to be.