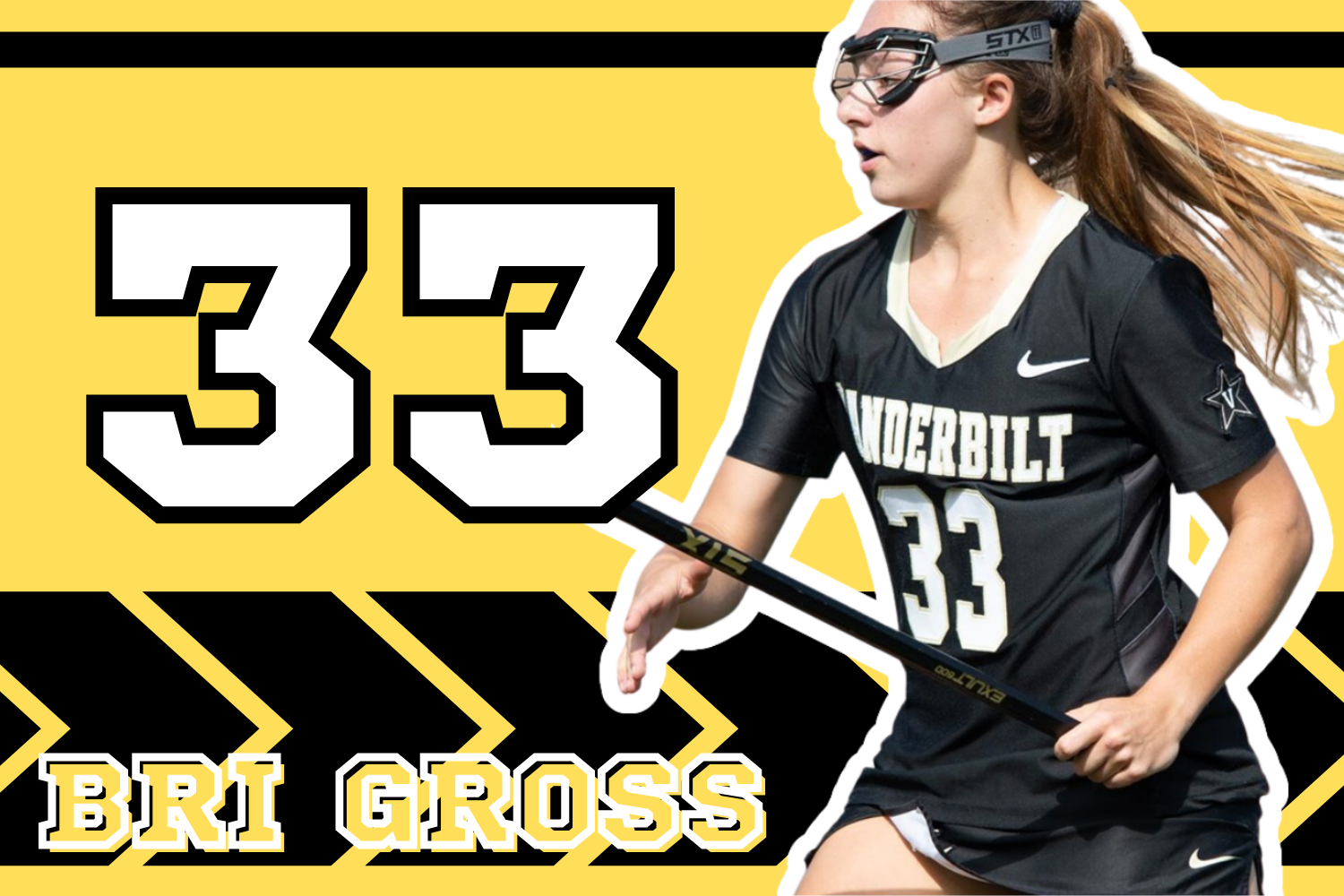 Growing up in an area where lacrosse was largely unestablished, Vanderbilt senior Bri Gross remained persistent and is now helping build the Commodores’ standing in the AAC while also forging her mark nationally.

This motto, nailed atop the firemen’s door in her father’s firehouse in El Dorado Hills, California, defined the upbringing of Vanderbilt senior lacrosse midfielder Bri Gross. Her family has no shortage of athleticism—her father, a firefighter, and her brother, a former basketball player at the University of Oregon, helped instill the values and approach to the game of lacrosse that have helped Gross succeed.

In 2019, Gross was selected to play for the U.S. Women’s U19 National Team, chosen from a pool of 700 of the United States’ most talented young female lacrosse players. She and 17 teammates represented the U.S. in the sport’s world championship, eventually winning the team’s first gold medal since 2011.

“Playing [there] boosted my confidence tremendously, just knowing [that] I can play with the best of the best and do well,” Gross told The Hustler.

Gross noted the mentality that it took to push through the national tryouts.

At the tournament, Gross was named the Most Valuable Player in the team’s first of 10 games. This honor is one of several she has earned between her high school and collegiate careers, including being named a two-time All-American, two-time Academic All-American and four-time Lacrosse Offensive Player of the Year for her high school.

She has carried her winning way with her throughout her Vanderbilt career, helping the Commodores make the NCAA Division I Women’s Lacrosse Championship tournament last season for the first time since 2010. Although the Commodores lost in the first round to Jacksonville, Gross indicated she didn’t take her team’s end-of-season standing for granted, and she remains committed to leaving a positive mark on the program.

“We are that team—we’re so close. We want to be the class that turns around this program, turns [it] into a team that’s going to the Final Four, that’s winning a national championship,” she said. “I think it just takes one class to really buckle down and change the culture.”

As a senior with many years of high-level lacrosse experience, Gross has naturally emerged as a team leader. She earnestly works to contribute to the success of the team, and that begins with her individual effort.

“I play with the mentality that no one plays harder,” she said. “Draw controls are about hustle. It’s about how hard you work … I’m giving absolutely every ounce to go after every ground ball with every draw control, and I expect all of my teammates to do the same.”

Her teammates have lived up to her expectations; Vanderbilt, at this point in the season, is battle-tested. The Commodores are currently 8–6, having played two games against top-15 teams—Notre Dame and Denver, the first of which Vanderbilt won 14–12. This victory stemmed from how the Commodores strike first with their collective effort from the bench, regardless of their opponent.

“Our bench is deeper than it’s ever been,” Gross said. “We’re just trying to come out with the mentality that we’re throwing the first punch, we’re practicing, we’re being aggressive and we’re not going to let [our opponents] put us on our heels.”

Despite how hard Gross and her teammates have practiced and played this season, obstacles were a constant through the COVID-19 pandemic. Gross noted that lacrosse is less popular on the West Coast than on the East Coast. As the nation went into lockdown, she had less competition against whom to play and fewer players with whom to practice at home.

“It was difficult through quarantine and being home,” Gross said. “You’re not with your team, and a lot of my teammates are from the East Coast, and so all of their friends play lacrosse. Whereas with me, not many of my friends play lacrosse, and only one other person from home plays at a collegiate level.”

But Gross added the lockdown helped instill in her the importance of competition and prompted her to get creative with how she could practice, such as by practicing with her former high school coach’s club team.

“You can go out and do wall ball, but it’s different from playing against actual people,” Gross said.

Fast forward to Fall 2021, and Gross is making academic history. She and teammate Megan MacGillis are the first two student-athletes in the history of the lacrosse program set to graduate with engineering degrees.

“It was new territory for coaches and for us players to figure out how demanding it was going to be,” Gross said. “We just leaned on each other all the time. If we were having a rough week, being able to go to someone who knows what you’re going through, like with chemistry or biology, was really helpful.”

Gross explained that she and MacGillis have to be deliberate about their everyday routines as student-athletes, and they often have their days planned down to the hour.

“Usually from like 12–4, we can’t really do anything [due to practice],” Gross said. “We’re getting up at 7, and we’re getting our homework done. Our study time is after practice. Being able to have that structure was helpful, but we still had a lot of late nights, and a lot of time spent studying in the Wond’ry.”

Despite the long nights of studying, Gross’s play has been nothing short of spectacular this season. She currently leads the Commodores in goals scored (26), shots (64), shots on goal (49), free position shots (12) and draw controls (62). She is also second on the team in points (33), ground balls (27) and caused turnovers (21).

Through the challenges of an AAC lacrosse season and the grind of an engineering degree, Gross has continued circling back to the motto affixed in her father’s firehouse. Her level of training has set her up to break precedents and become a uniquely accomplished lacrosse player, and only her level of expectation is the limit.