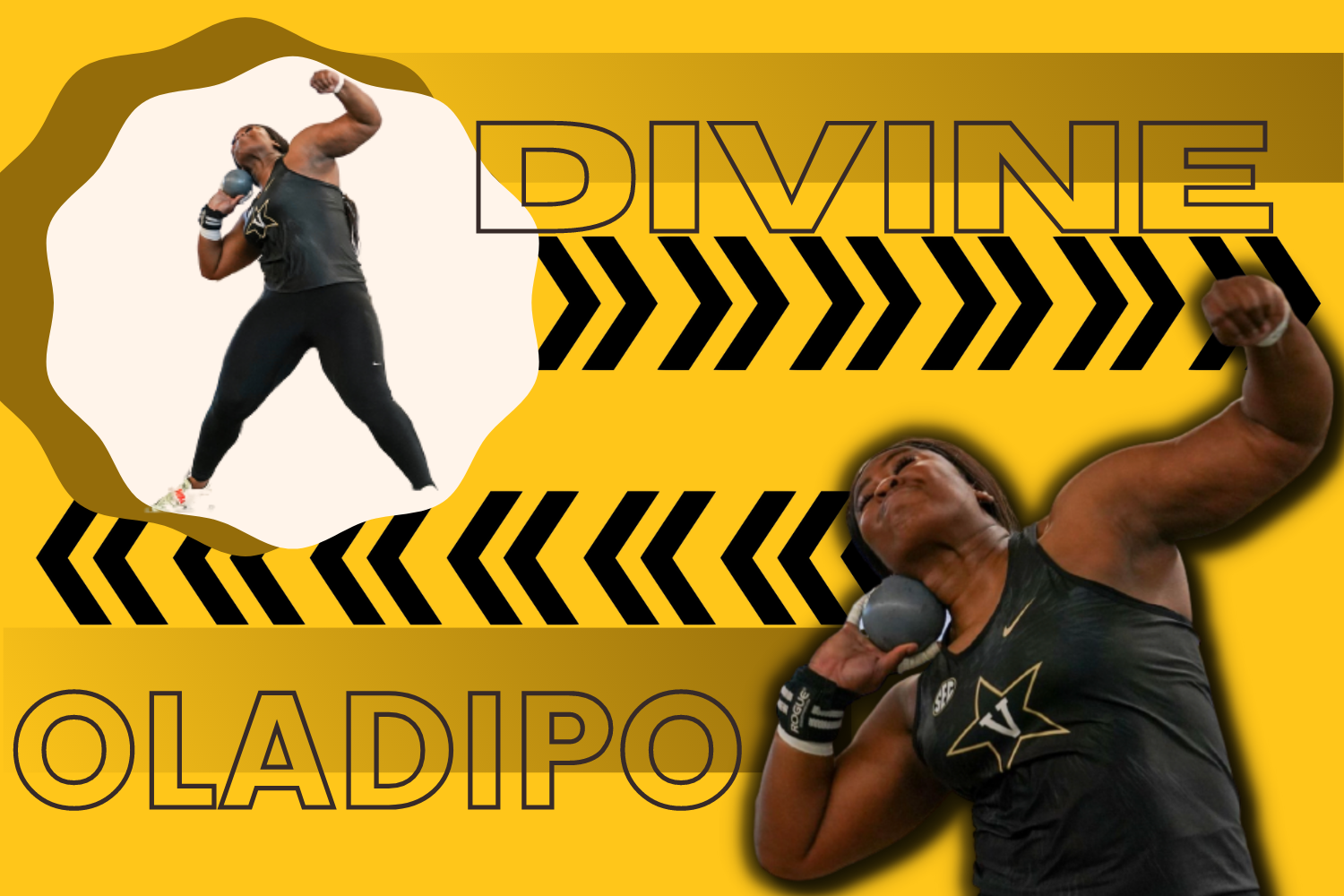 After coming to Vanderbilt in the fall, the graduate transfer has already broken long-standing Vanderbilt records and proven that she is a force to be reckoned with in the SEC.

Although she may not have expected to compete at Vanderbilt after stints at the University of Connecticut and Ohio State University, thrower Divine Oladipo has made the most of her time competing on West End.

After Oladipo’s 2019-20 season was severely disrupted by COVID-19, she had begun to think about graduate options after her time in college. When Ashley Kovacs—an assistant coach at Ohio State who often worked one-on-one with Oladipo—received a job offer from Vanderbilt head coach Althea Thomas before the 2021-22 season, it was only a matter of time before Oladipo followed her to Nashville.

Oladipo has made an impact immediately upon arriving, having a stellar indoor season and already becoming one of the most decorated athletes in Vanderbilt track and field history.

In her first meet of the season, the Commodore Challenge, she posted a personal best and finished first overall in the shot put with a throw of 17.92 meters. With her throw, she also set the nation’s top indoor mark of the season and broke fellow Commodore Leslie Vidmar’s record of 16.16 meters that was set in 1998.

Oladipo has not wasted a second thus far, promptly showing her teammates, coaches and competitors her limitless potential. At the Commodore Challenge, she bested every person in her event—despite it being her first meet at Vanderbilt—including 30-year-old Jessica Ramsey, who finished 12th overall in the shot put in the 2021 Tokyo Olympics and competed in the Commodore Challenge as an individual.

While Oladipo thrives competing as an individual, she credits Vanderbilt, her teammates and the backing of the athletic department with her continued development.

“I feel like there’s a great support system here,” she told The Hustler. “Whether it’s the AD [Candice Storey Lee] coming to watch us at the track meet—that’s something that’s never happened to me at my previous schools. I just think being here, it’s a great achievement, and I’m happy to be here.”

With an athletic career that has spanned six years and three schools, Oladipo has also appreciated feeling at home and having a sense of consistency in her new home.

“Coming to Vanderbilt, every step along the way has been better and better,” she said. “I feel like [the school] is somewhere that I really fit in and somewhere that I’ve really learned to be myself.”

For the rest of the indoor season, Oladipo never finished worse than ninth in a meet. Even on days like the Music City Challenge, when she posted a mark over one meter shorter (16.91 meters) than her personal best and finished fifth overall, her throws still put her among the best in the nation.

Oladipo has high expectations for herself, but even on off days, she still remembers why she first fell in love with the sport.

As the indoor season came to an end, Oladipo had become known as a dominant force in the conference. In her first SEC competition on Saturday Feb. 25 and Sunday Feb. 26, she competed hard in a difficult conference, recording a mark of 17.63 meters in the shot put and earning herself a silver medal.

At the final meet of the indoor track and field season, the NCAA Indoor Championships held in Birmingham, Alabama, Oladipo finished ninth overall in the shot put with a mark of 17.15 meters. Her performance led to her being named Second-Team All-American for the third time in her collegiate career for the indoor shot put—2018, 2019 (both at Ohio State) and 2022.

The outdoor season officially kicked off on Saturday March 18 and Sunday March 19 with the Black and Gold Invitational held in Orlando, Florida. Although Oladipo herself did not compete, she remains prepared for a dominant season outdoors, in search of more accolades and team success.

“I’m so happy with everything that I’m doing so far,” she said. “But I’m excited to keep going.”