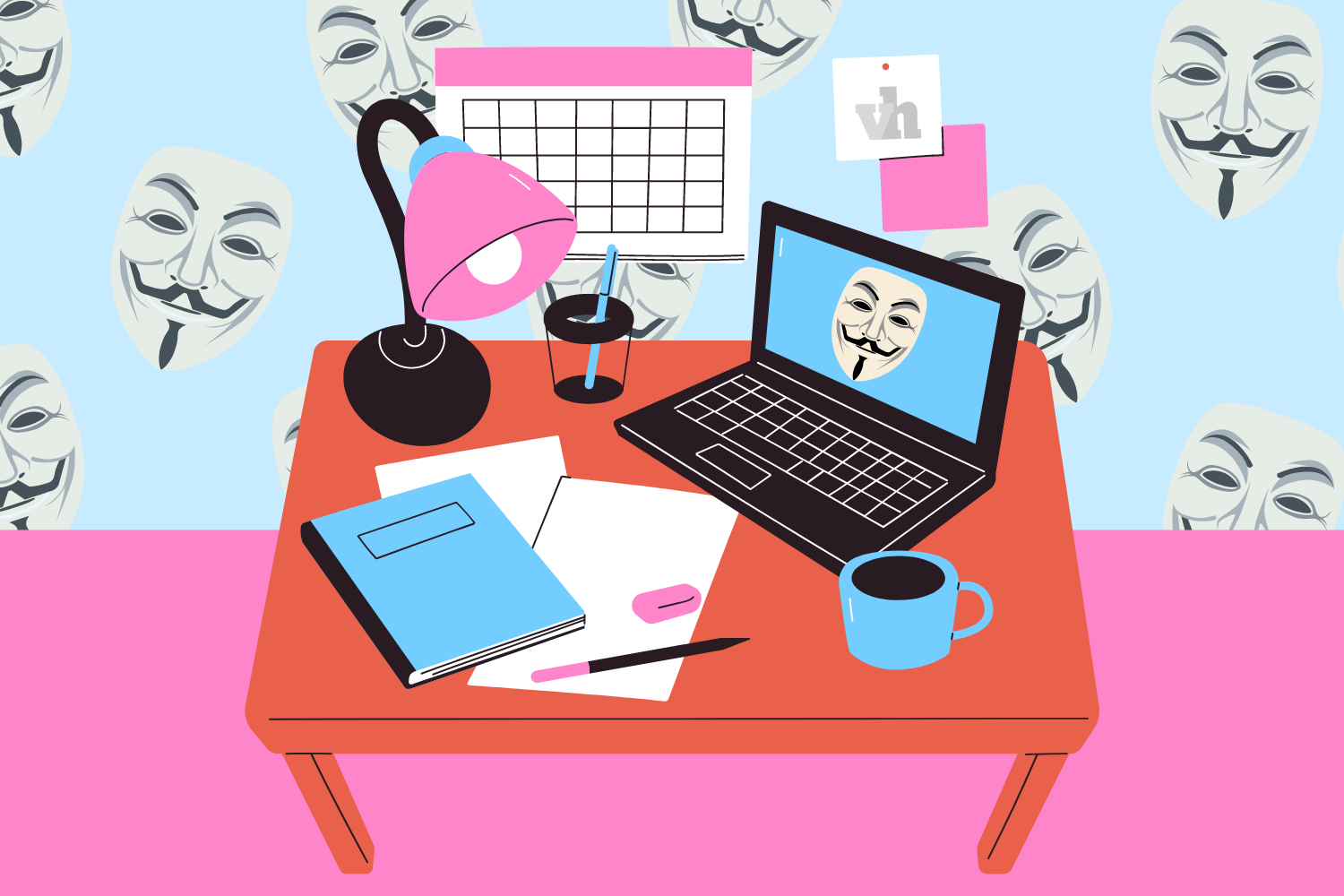 Graphic of a desk, created Feb. 22, 2022, with an anonymous mask and study supplies. Platforms like Yik Yak allow for users to post anonymously. (Hustler Graphics/Alexa White)

WHITE: This user’s identity is hidden

Where do we draw the line between anonymity and toxicity?

Editor’s note: This piece contains a mention of sexual assault.

One of the most embarrassing things I have done is creating a Reddit account using my full name.

To be fair, I didn’t fully understand exactly what Reddit was and I had always used my name on all other social media platforms. I realized my mistake almost immediately. I do not think that even 1% of the Reddit usernames I have seen are people’s names.

Oops. It’s even worse that this was just last year.

One of the reasons that Reddit is so popular is that it is used to get honest information and honest opinions. Reddit’s anonymity is unique; there is a distinct separation of person and question or person and opinion. Anonymous users can submit to judgment by others or even confess to making horrible choices under aliases. People often create burner accounts—accounts made specifically to be discarded—and then switch to another account after just one post to avoid being associated with the account in any way. When you post something, you are doing so knowing that your name is not attached to that information. Sure, someone could do some digging and probably find out who you are, but there is at least separation between your real identity and your Reddit identity.

There are many modern examples of toxic anonymity. The term “online disinhibition effect” was coined to explain the lack of self-control and restraint that one feels when communicating online. There is a cognitive dissociation of self when using the internet that explains some of the erratic online behavior that we see today. Even when people are using their real names online, text on a screen is still not the same as communicating in person. We are more hostile, confrontational and less thoughtful.

It is easier than ever to pretend to be someone else or to distance your online presence from your real-life self. Before the internet, you had to alter your handwriting or put on a disguise, but, now, all it takes is grabbing a photo from Google and using anything but your name or finding a platform that doesn’t use identities.

Anonymity is not a new concept, but it is being implicated much more frequently in the digital age. We want untraceable web browsing. We want our opinions detached from ourselves. We want to say our piece and forget that it affects others.

Recently on campus, we have seen anonymity used for good. An Instagram account run by Vanderbilt students provides a place for survivors of sexual assault to anonymously share their stories. Another Instagram account, though recently inactive, provided a platform for students to anonymously share their experiences with Greek Life on campus and amassed 3,400 followers. These accounts provide anonymity for safety so that people feel comfortable sharing their experiences.

On the other hand, anonymity is also harnessed in toxic and harmful ways on Vanderbilt’s campus. The app YikYak, whose CEO is an adjunct professor at Vanderbilt, is back on campus after being taken off the market in 2017 due to extreme bullying and harassment. The app allows users to anonymously post and up or downvote posts by other people in the area. In contrast to many anonymous social media platforms, the requirement that users must be within a few mile radius means that, almost always, users are interacting with people they know.

Recently, a YikYak was posted that discussed posting misinformation on the app. Not having a connection between your name and the things you say seems to create empathy about the potential harm your words could cause. Typically, students are discouraged from posting misinformation about campus on social media because other students will hold them accountable, but that’s only possible because it’s clear who has spread the misinformation.

Several students told me that one anonymous user made a YikYak asking why there were so many police cars around Blair on Feb. 20. Allegedly, someone else anonymously commented that it was because there were two shootings by Blair. This post has since disappeared, but it had been seen by an unknown number of students before it was removed. VUPD confirmed in a Feb. 22 email to The Hustler that they have not received any reports of a shooting near Blair School of Music.

Posts like this containing false information could very well have been posted with the good intent to keep other students safe. If they truly did believe there was a threat at Blair, this could have been an impactful post. But anonymity also provides protection from any consequence, and in this situation, it caused students to panic and fear for their Blair friends. Posts like this are all over the app, baseless accusations, lies, jokes that implicate others.

There are so many YikYaks posted that spread misinformation with anonymity. They are sent around in group chats and texts as students seek to verify the rumors. It is hard to tell what is fact and what is a guess or a joke. Hopefully, in the future, students will call VUPD with immediate safety concerns rather than make a post on social media or post something to stir up fear or anxiety.

Often, anonymity functions as permission. Permission to say as one pleases, permission to post without consequence. This calls to mind a piece by Serbian artist Marina Abramovic. She once performed “Rhythm 0”, which allowed strangers to use many objects, including weapons, on her body. She left a table with many objects ranging from perfume to a gun and a bullet to be used. There was a sign that explained that they could do whatever they wanted to her and she took responsibility for the six hours of the performance.

She found that by the halfway mark of her performance, people had already begun to strip her naked and mutilate her body just because they felt they had the permission to. Even the revolver was almost used to end her life by an audience member. After the performance was over and she was thoroughly violated, she reflected that the audience quickly left, stating that “people could not actually confront with me as a person.” As soon as there was accountability for their actions, the audience members fled in fear of retaliation.

Though to a different degree entirely, many of the things said through YikYak and Reddit that are harmful seem to fall under Marina Abramovic’s explanation of why people fled when the performance was over.

We are quick to say things until we come to terms with how it affects others, especially when it can be traced back to us.

Not all anonymity is bad. Just as bank robbers often wear ski masks to hide their identity, people may turn on incognito mode to search for some weird rash they have on their elbow on WebMD. Not everything we do needs to be tied to us, but when we implicate others in our choices, there needs to be some semblance of accountability.

Anonymity is valuable and can do real good on college campuses by bringing attention to important social issues and giving people a platform to share their stories without danger. However, too much anonymity functions as permission to say harmful things.

Daniel J. Solove, professor at George Washington University Law School, argues for what he calls “traceable anonymity.” This type of anonymity is protected until anonymity itself is used to harm others. I think that personal responsibility should come before policy. YikYak and other apps and platforms should absolutely take responsibility, but so should we.

Before you post, think about who you are impacting by posting this without your name attached to it. Are you doing so for your safety or so you do not receive any backlash for your harmful words? Those are very different things.

For me, I think I will survive with my Reddit account being my full name. I take full responsibility for my opinions on Netflix’s “Love is Blind” and the ongoing problems with Campus Dining.