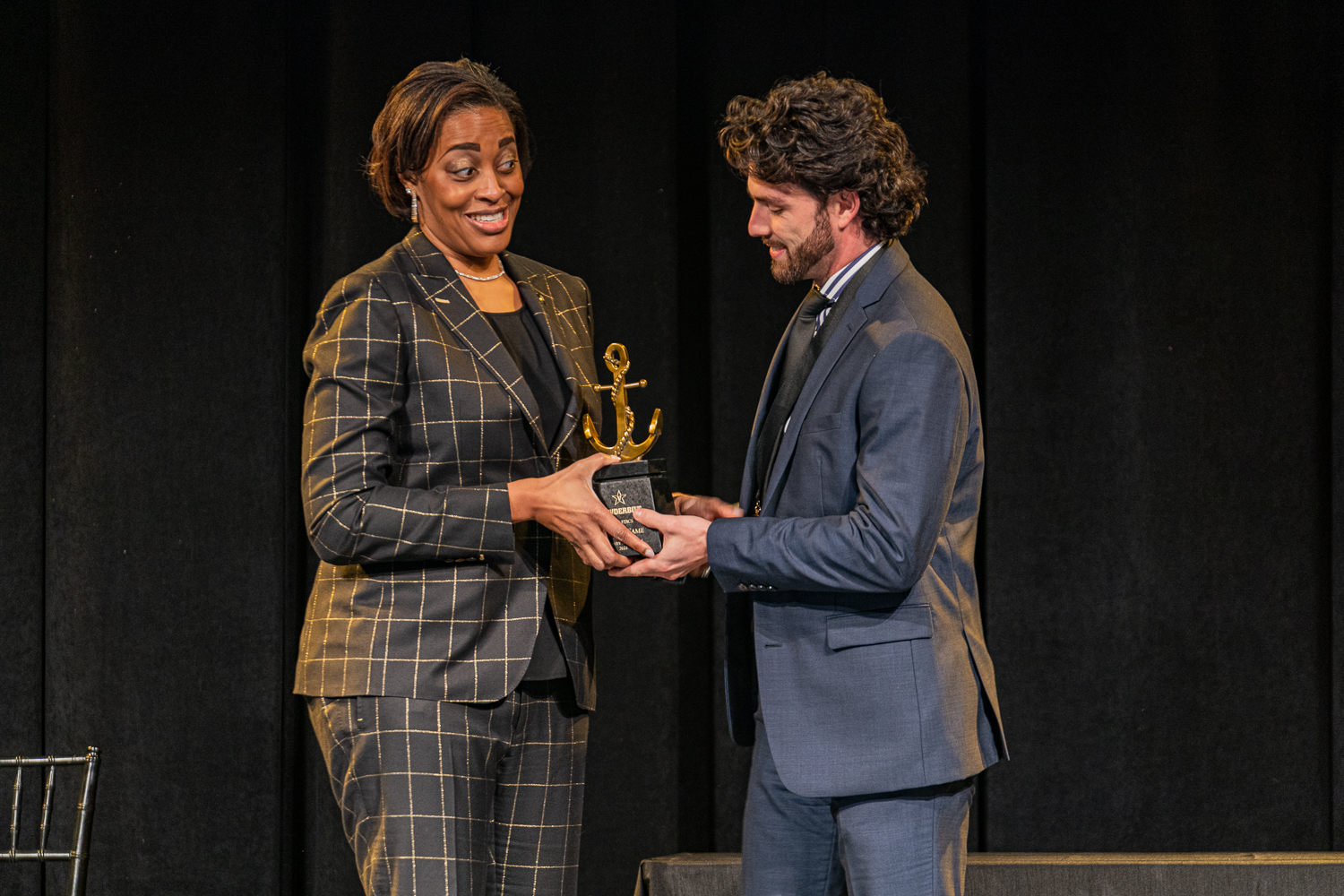 Vanderbilt honored 11 former athletes, coaches and administrators on Jan. 28 as the newest inductees into the Vanderbilt Athletics Hall of Fame.

A busy couple of days of competition on West End were jump-started with the induction of Vanderbilt’s newest additions to its Athletics Hall of Fame on Friday, Jan. 28. Athletic director Candice Storey Lee and Chancellor Daniel Diermier hosted a special group of 11 former athletes, coaches and administrators in the Student Life Center for the celebration. 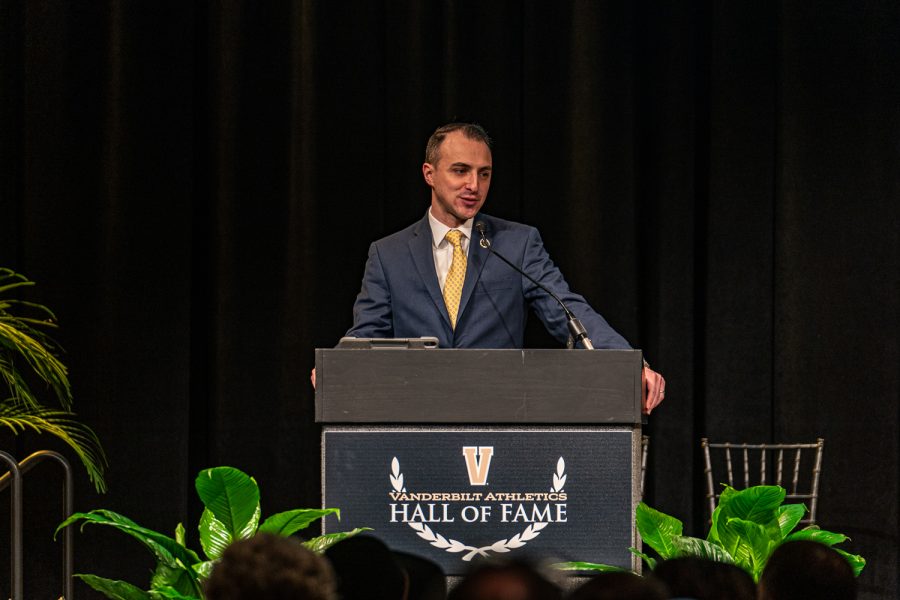 “We are in the midst of a transformative moment for Vanderbilt athletics—one that is rooted in the success that you and your fellow Hall of Fame members helped establish over the years,” Diermier said. “Vanderbilt athletics, and now Vandy United, is not something that stands apart from the rest of the university. It’s an integral part of who we are. Your accomplishments embody the best of the human spirit and indeed, they represent ideals for every member of the Vanderbilt community.”

The 2021 class ranged from early 1900s quarterback Ray Morrison to recent World Series champion and former VandyBoy Dansby Swanson to the late Williams II himself. Each inductee was honored with a tribute video and gave speeches regarding their time at Vanderbilt. The Hustler captured the eloquent event with quotes from their speeches and photos of each moment. 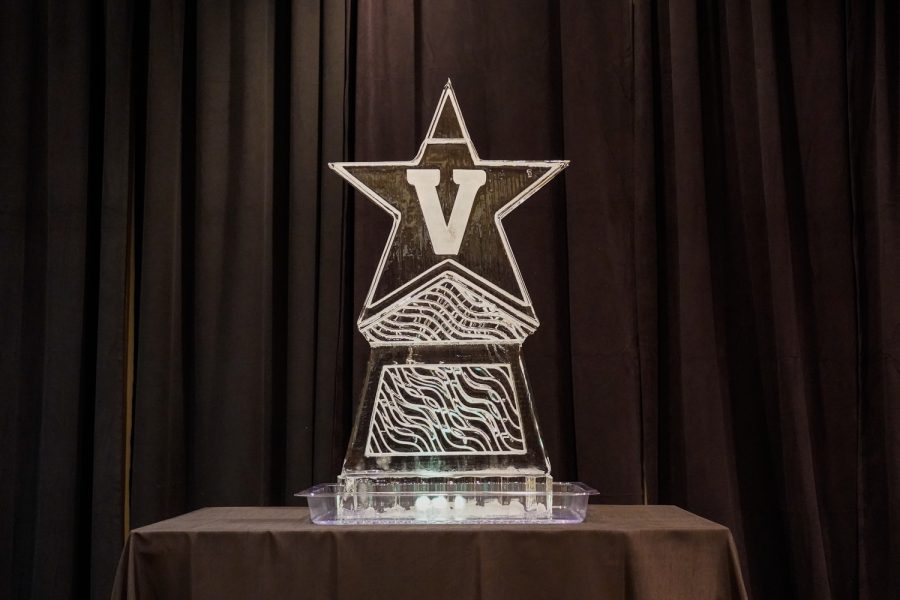 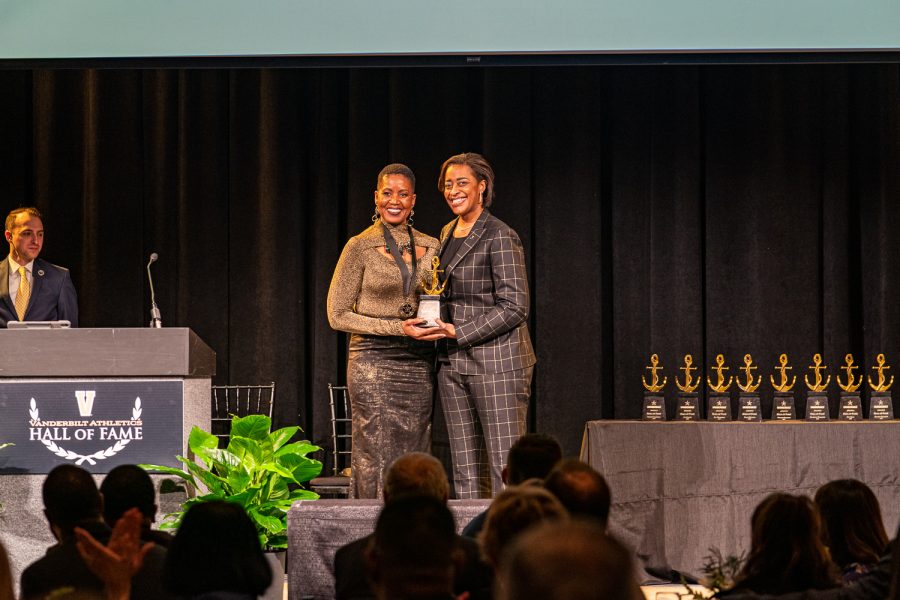 Vanderbilt’s first-ever women’s basketball player to earn All-SEC honors, Harriet Brumfield paved the way for many Commodore greats after her. She was the first Lady Commodore to register 1,000 career points and still sits third on Vanderbilt’s all-time scoring list with 1,956 career points.

“I never felt like Vanderbilt owed me anything. My experiences at the university were fulfilling…I left this university proud to be a Lady Commodore, and even more so today,” Brumfield said. “For the young student athlete listening or watching tonight, there’s three things I want to drive home. First of all, your character means everything. Number two, just have fun. And number three, just be.” 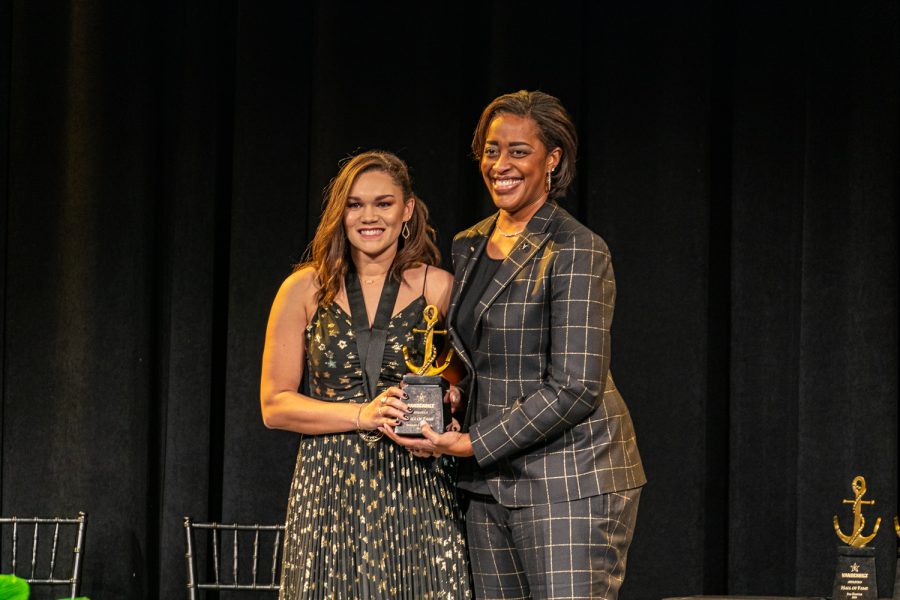 Following SEC Freshman of the Year honors in her first year on West End, Sydney Campbell helped lead the Vanderbilt Commodores to a national championship in women’s tennis in 2015. She finished her career with an impressive 108-50 record in singles play and became Vanderbilt’s first NCAA singles semifinalist during her senior year in 2017.

“David [Williams II] made a promise to me. He said, ‘When you graduate, you’ll always have a home here at Vanderbilt. And Candice Lee, you have upheld that promise and it means so much to me. Thank you for allowing me to still be around and to help in any way I can,” Campbell said.  “Vanderbilt athletics is truly in the best hands possible with you at the helm and I’m so excited to see what the future holds.” 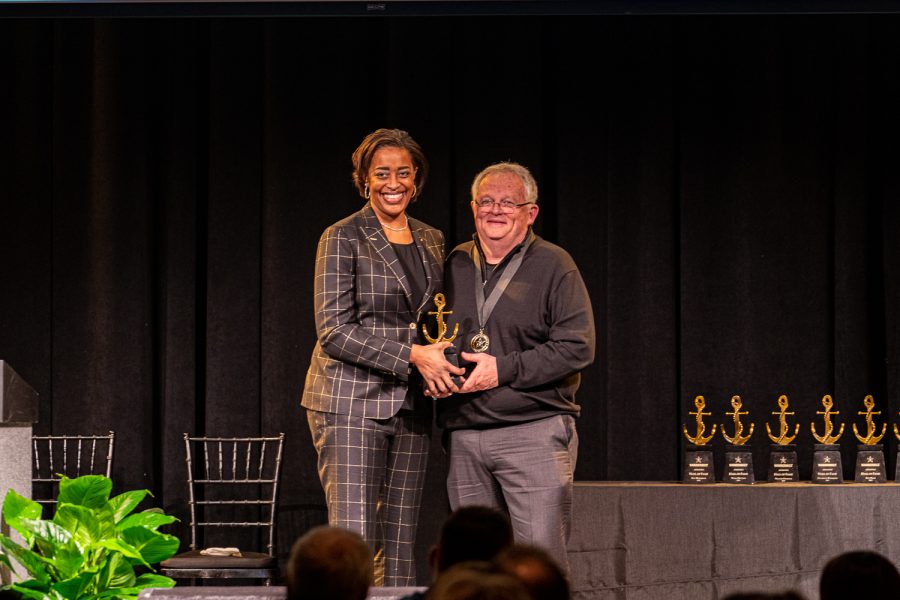 “It was a heck of a lot of fun and to achieve success the way we did with the kind of players that you get to coach here—that’s something I’m very proud of and I look back on with a great deal of pride,” Foster said. “Having left the profession and looking back at it I realize just how special this place was to me and to my family… When Shea [Ralph] was announced as the coach here, I just had nothing but confidence that the future is great. Secondly, Candice is a star. She [Candice] will represent this university and help take this university to places that it has not been and aspires to get to.” 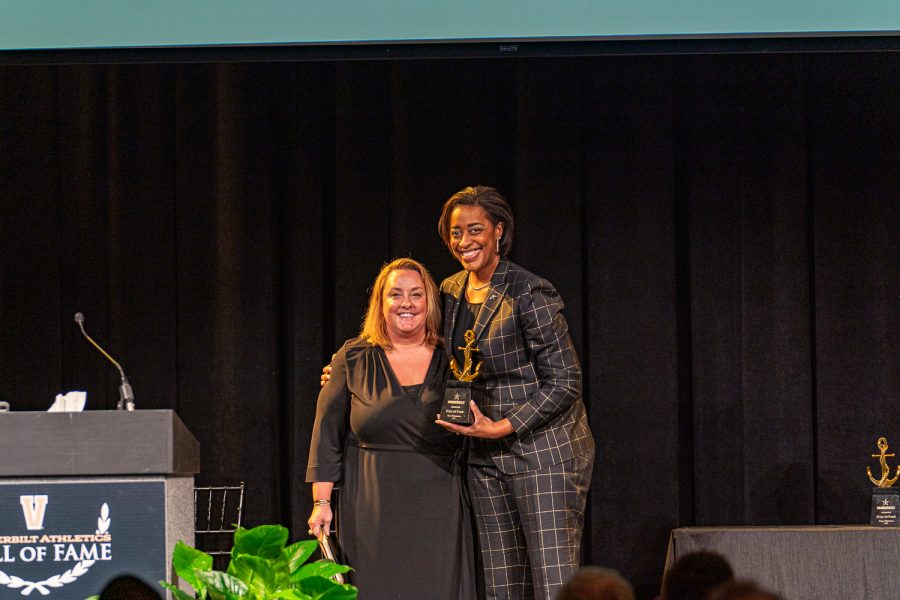 During the golden era of Vanderbilt football under head coach Dan McGugin, Ray Morrison emerged as one of the best quarterbacks in school history. He completed his stint on West End with a 36-2 record and as an All-American in his senior year. He also eventually became McGugin’s successor at the helm of the Commodores. He was represented at the ceremony by his great-granddaughter Amanda, who made a speech on his behalf.

“He loved the game of football and one of the things when my great-grandfather used to talk about life in general, he’d talk about faith, family and football, and football probably the greatest of all of those. He had a love for the game like nobody I’ve ever seen,” Amanda said. “His biggest achievement in life, and he talked about it religiously, was when Dan McGugin picked him to be his successor. That was something that he talked about that he relished in, he loved this university. He loved Vanderbilt.” 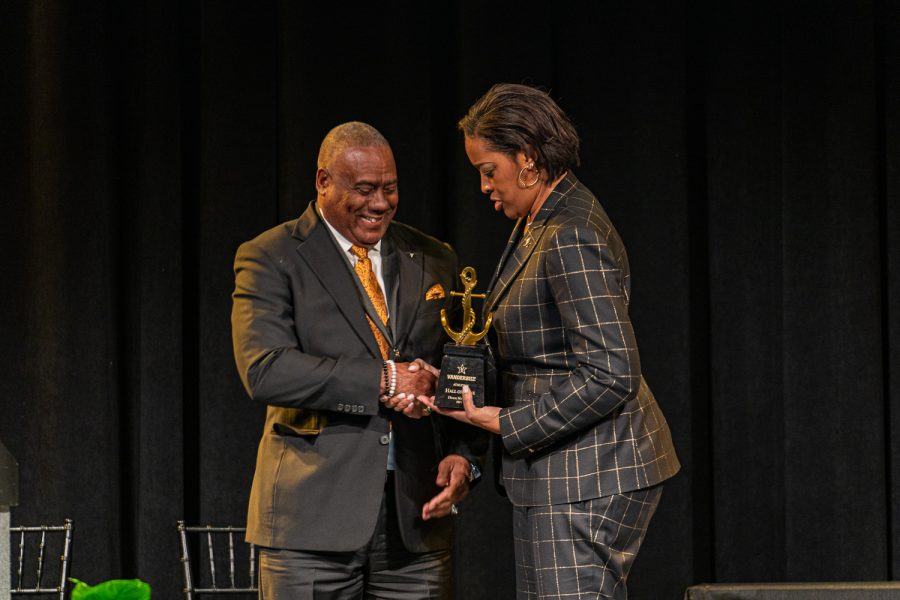 One of the best kick returners in the history of the SEC, Doug Nettles brought a unique skillset to Vanderbilt’s football teams in the early 1970s. After a four-year stint on West End that saw him help the Commodores to a Peach Bowl appearance in 1974, Nettles became the first Black Commodore to be drafted into the NFL. He later played six NFL seasons for the Baltimore Colts and New York Giants and in his speech, recalled one of the first times he returned to Vanderbilt.

“[When I was back in Nashville one time], one of the guys I was with suggested that we go out to Vanderbilt, and work out,” Nettles explained. “About 10 or 20 of the Vanderbilt players came out for afternoon practice…They all started walking toward me. And one of them looks down and says, ‘Are you Doug Nettles? I said, ‘Yes.’ And he reaches out and shakes my hand and then subsequently all of them come to shake my hand. I said, ‘To what do I owe this?’ And he said, ‘Thank you for what you did so that we could be here.’” 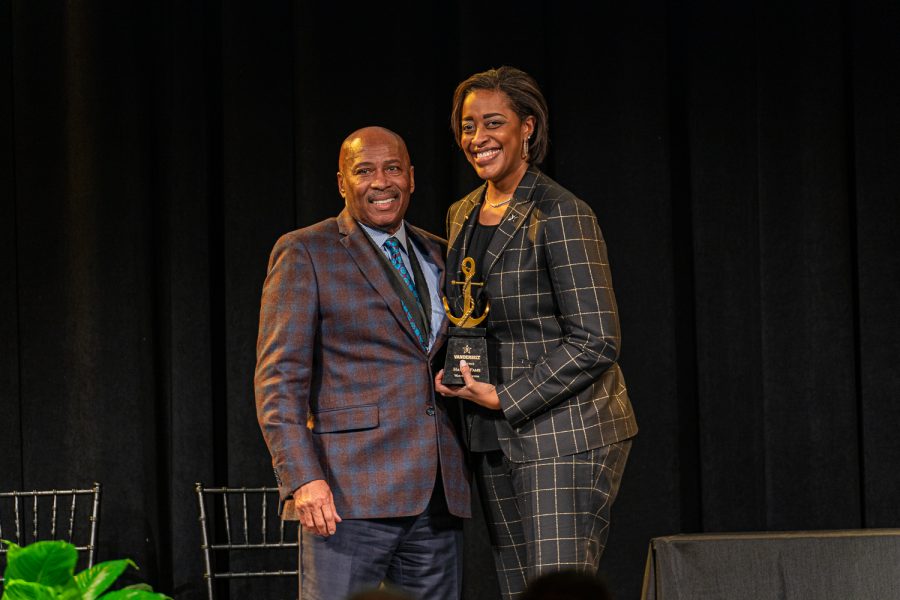 A teammate of Nettles in the early 1970s, Walter Overton was a Nashville legend for his play at local Pearl High School. When he came to Vanderbilt, he was the first Black quarterback to ever commit to the Commodores. He later transitioned to be a wide receiver for Vanderbilt and was an intricate part of their 1974 Peach Bowl appearance.

“My speech is about an unlikely dream that comes true. As a little boy growing up next to Centennial Park, I listened to Larry Munson’s radio broadcasts. My brother William and I would stretch out on the floor every week where Larry brought the games alive for us,” Overton recalled. “You could see the lights and hear the crowd of Dudley Field from our backyard. That’s where the dream was born. Maybe someday, if I’m good enough, I’ll get to play football at Vanderbilt. But at the same time, I was also afraid it might never happen. I censored my own dreams due to the color of my skin…My experience at Vanderbilt opened doors and helped me build a successful and fulfilling career.” 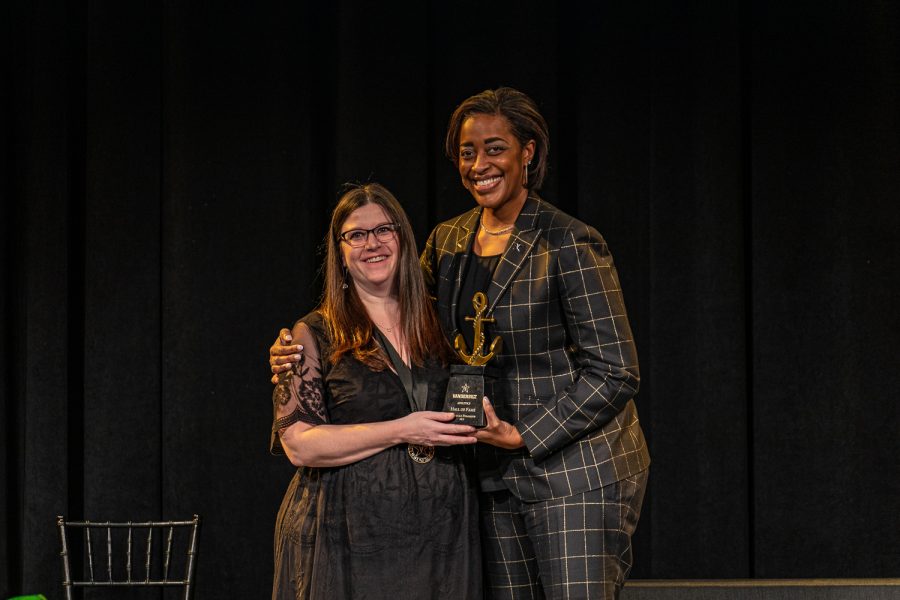 Among a number of accolades that include the national Rookie of the Year in 2005-2006 and multiple All-American selections, nothing sits ahead of Michelle Peloquin’s status as a national champion. In 2007, Peloquin led Vanderbilt bowling, a program that was only three years old at the time, to Vanderbilt University’s first-ever national championship in any sport.

“The final tipping point in my commitment to Vanderbilt came from a conversation with another coach, to whom I stated, ‘I don’t know if I can afford to go to Vanderbilt.’ And her reply was, ‘I don’t think you can afford not to go to Vanderbilt.’ And in that moment, I knew she was right,” Peloquin said. “When we won the university’s first team national championship, there were alumni in the audience who shared with us that they had driven hours to attend the match because they wanted to witness history. When our teammate threw the championship clinching shot, we shed celebratory tears because we felt like all of our hard work had paid off.” 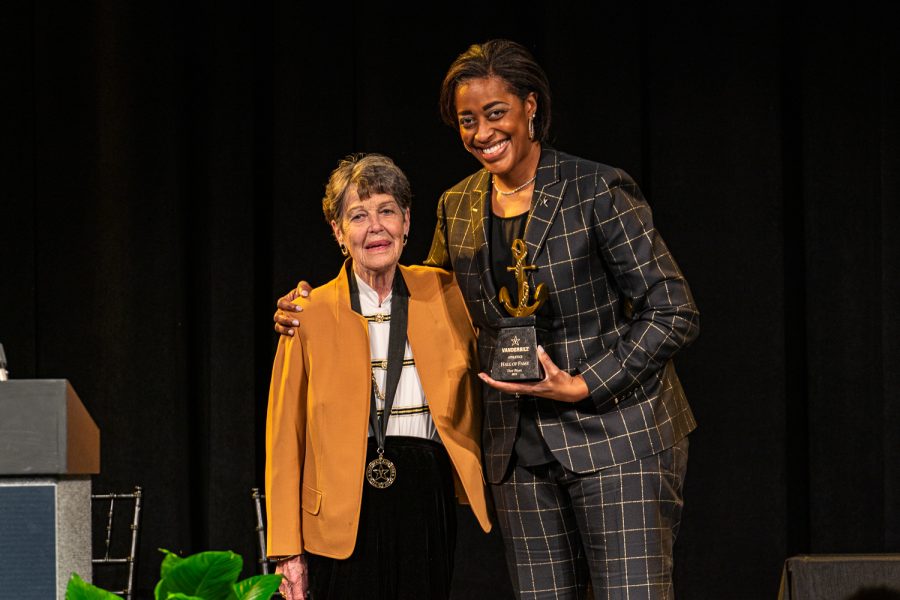 By the end of her time working in the Vanderbilt athletics ticketing office, Dot Poag had dedicated more than half of her life to the Commodores. She began her work on West End in 1949 in the business office and after officially retiring in 1984, she continued volunteering for another 15 years. She quickly became beloved by Vanderbilt athletes, administrators and coaches and later, she emerged as the first woman to assume a senior position within Vanderbilt athletics, paving the way for Lee and others after her. The 92-year-old was in attendance at Friday’s event, but her niece gave a speech on her behalf.

“She dedicated her whole life to Vanderbilt,” her niece said. “Dot just had a way with people. She has a beauty and not just an outward beauty, but a genuine outstanding character and poise that anyone around her was drawn to. Her school spirit made all the professors, coaches, deans, Chancellors, Directors, students fall in love with Dot Poag.” 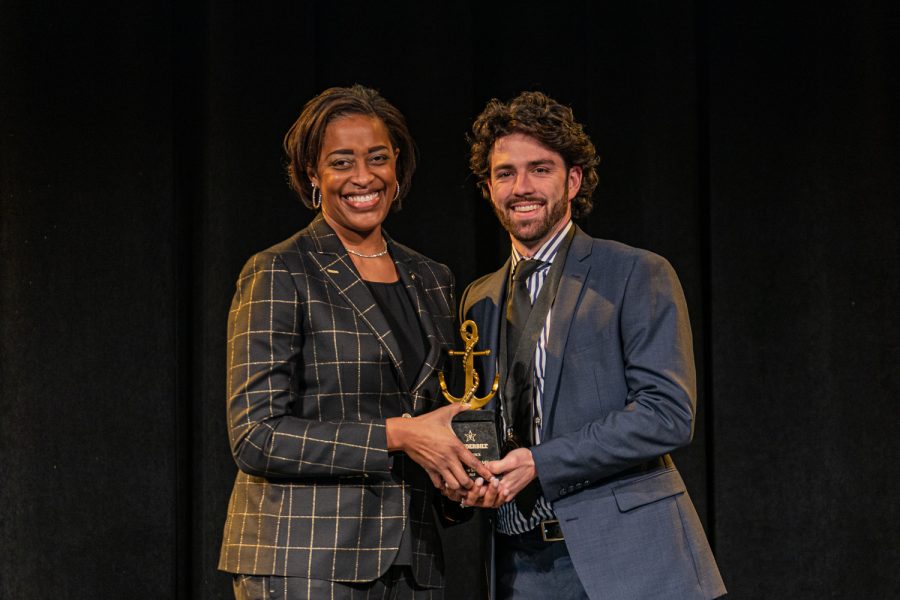 One of the greatest VandyBoys to ever grace Hawkins Field, shortstop Dansby Swanson helped Tim Corbin take the Vanderbilt baseball program to new heights when he led the Commodores to their first College World Series title. Swanson was named the 2014 College World Series’ Most Outstanding Player and later became the No. 1 overall pick in the 2015 MLB Draft.

“Vanderbilt is a unique place that I know so many other universities envy what this place has to offer from the city, the degree, the athletics, academics; it’s the full package and I know that they are really unpacking the future for this place. So I’m forever grateful for that,” Swanson said. “No one can really understand when I say that I’m forever indebted to this place…I’m Vanderbilt through and through, through thick and thin. I said I was an Atlanta lifer and I’m also a Vanderbilt lifer.” 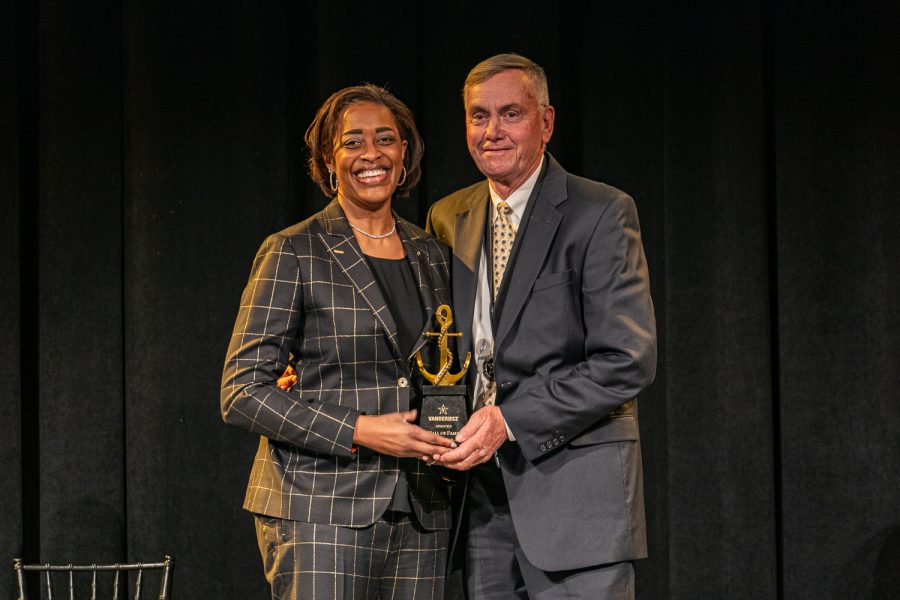 Among the many famous Vanderbilt men’s basketball teams of the 20th century, one of the most accomplished was the 1974 team that was anchored by Jan van Breda Kolff. Van Breda Kolff was named the SEC’s Player of the Year in 1974 and helped the Commodores to only their second-ever SEC regular season championship that same year. The forward still holds the Vanderbilt record for career assists per game with 5.38. He was not present at the ceremony, but delivered a pre-recorded video message in his absence.

“I think the main thing I think of when I think of Vanderbilt and the success we had and the success our teams had, I feel like I’m not one that should be receiving this award. It should be our team. I think our 1974 just embodied team spirit and camaraderie and togetherness more than anything I’ve ever experienced in my life before or after,” van Breda Kolff said. “We just had each other. And I think that’s the most exciting thing—that we were a team on and off the court and we won together, we lost together. I just enjoyed that so much.” 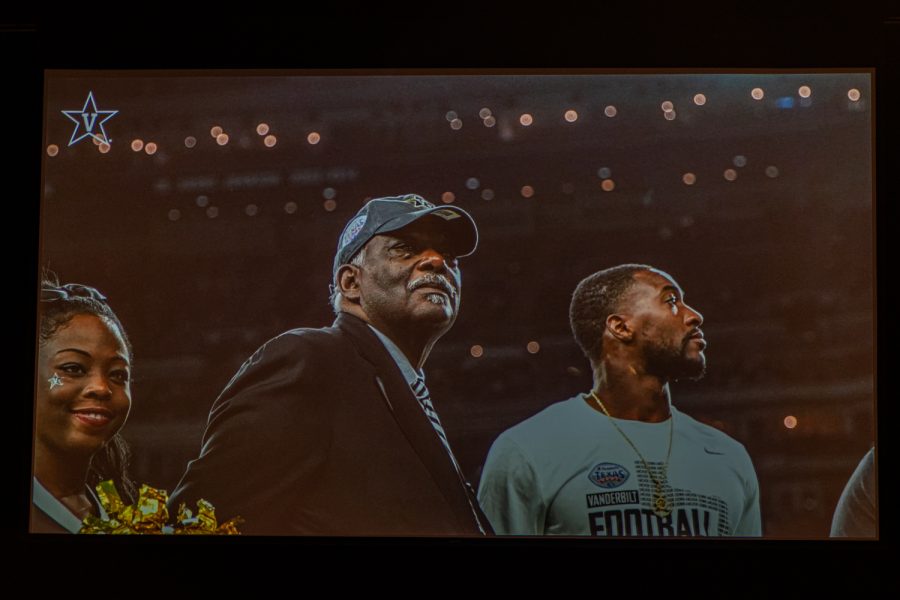 Perhaps the most touching dedication of Friday’s ceremonies was saved for last and the late David Williams II, Vanderbilt’s former athletic director. When he assumed his post, Williams II became the first Black athletic director in the history of the SEC. From 2003-2019 he led Commodore athletics to new heights, overseeing four national championships and countless memorable victories. He is survived by his kids and his wife Gail, who spoke on his behalf, and is a respected figure in the lives of many Commodore Hall of Famers.