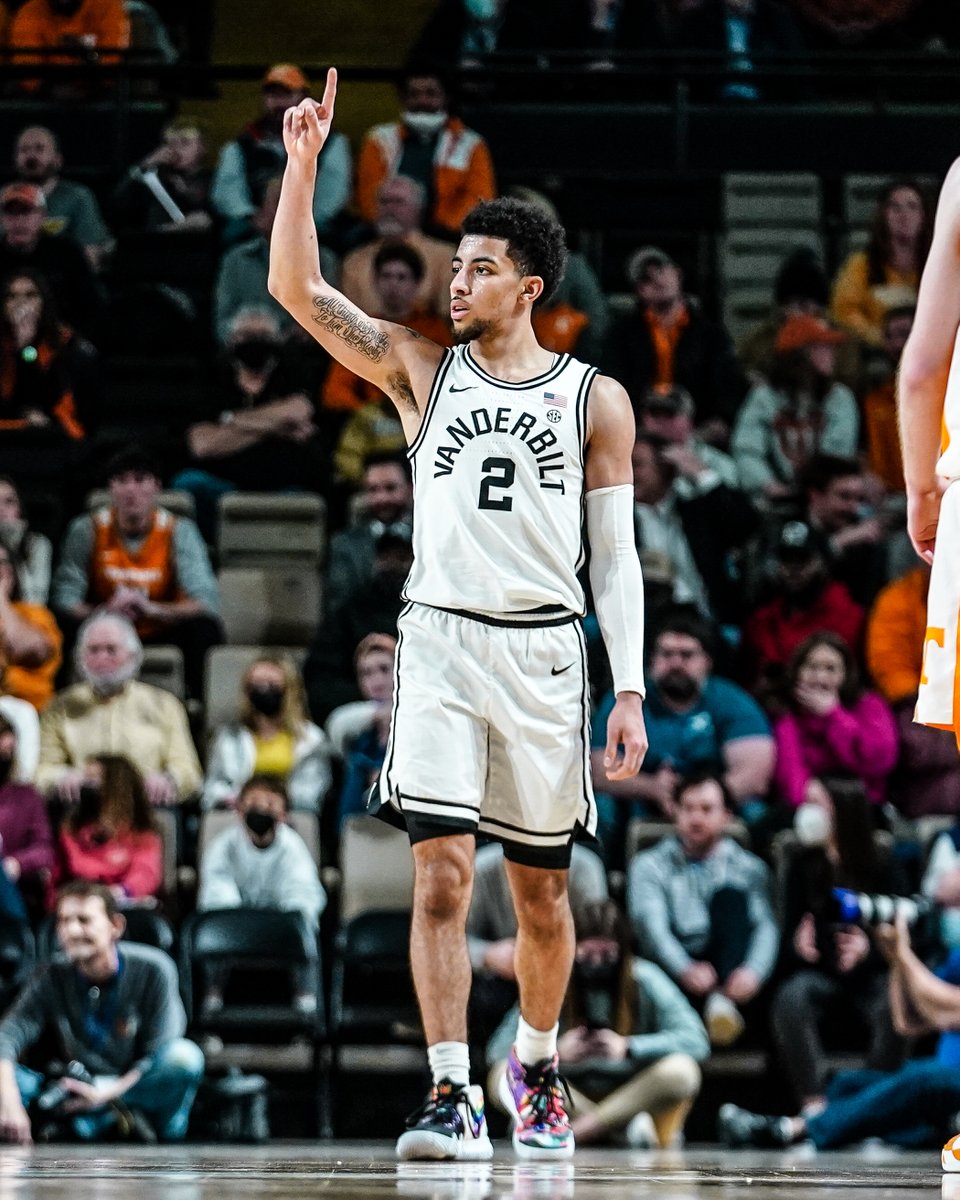 Still missing key players from the lineup, the Commodores are struggling offensively and desperately need a breakthrough or, perhaps, a heroic rescue.

“One thing I can say to this media—because this media gets kind of fucked up sometimes when it comes to me—we don’t have our full roster. Y’all know we don’t have our full roster. Stop asking me stupid fucking questions about if I feel like I can do something. If I had my roster like they did, then I feel like I can do whatever I want to do. I’m coaching really hard. My boys are playing really hard. I’m not embarrassed about nothing. We have four freshmen starting, y’all need to act like it. Act like we got 17-, 18- and 19-year-olds out here trying to learn how to play against 22-, 23- and 24-year-old guys. Come on, man. Stop disrespecting me, bro. Like don’t do that. I work too fucking hard. I work way too hard for that. Y’all write all these fucking articles about me, and all I do is work. We got young kids on the floor.”

Okay, you got me. That quote was from Penny Hardaway, Memphis’ head basketball coach, not Jerry Stackhouse. But you believed it for a minute, didn’t you? That’s because it’s eerily similar to how Stackhouse must be feeling right now.

"Stop disrespecting me, bro. … I work too f–king hard"

Penny Hardaway wasn't having it after Memphis' loss 😳

Coming into the season, Stackhouse envisioned an offensive juggernaut capable of hurting you with both speed and size. One that had wisdom and young depth. One that played stingy defense. One that could compete in—even threaten—the SEC. But, without graduate transfers Rodney Chatman and Liam Robbins, the young group is struggling to create consistent offense.

Though they found a rhythm in the second half, Vanderbilt shot just 37% in the first period of their 73-66 win over Georgia on Jan. 15. A 13-0 run to begin the second frame propelled them to victory, but still, they had to dig themselves out of a 14-point deficit because of size mismatches and poor shooting. Then, in a 68-60 loss to Tennessee, they shot 37% for the entire game. Coupled with an astonishing 21 turnovers, this statistic spells poor offense. For the cherry on top, the Commodores allowed 10 offensive rebounds, racked up 12 turnovers and shot a mere 29% from the field and 52% from the line in Gainesville, inevitably falling to the Florida Gators, 61-42.

This 1-2 week doesn’t condemn the Commodores’ season yet. If the team can make necessary adjustments and get healthy, they can turn their fortunes around in a hurry, possibly garnering a spot in the NCAA Tournament come March. However, this is seeming less and less likely with each passing game. At this point, a trip to the National Invitation Tournament (NIT) seems doubtful.

Looking for a Heroic Return

“We’ve got two big pieces that we’re missing,” Stackhouse said after the matchup with Tennessee.

The injury bug has not been kind to the Commodores in recent years. Aaron Nesmith and Darius Garland both missed extended time while on West End, and now, Chatman and Robbins have been stung too.

Robbins has been out for the entire season with a foot injury. Chatman, originally sidelined after knee surgery, played in a mere five games before tweaking his hamstring and re-aggravating his knee injury. Either player’s return could make a huge difference for the Commodores.

If Chatman comes back, he will provide another ball handler to take the load off of Pippen Jr.’s shoulders. He has great court vision and is an important veteran presence for Stackhouse’s squad after two years at Chattanooga and another two at Dayton. Vanderbilt is 4-0 in games where Chatman is fully healthy, and the Commodores were never held under 68 points in those contests.

Meanwhile, Robbins would drastically change the size matchup for Vanderbilt. He’s 7 feet tall and can impact the game on both ends of the court. Such a mismatch is any coach’s dream, so it’s easy to understand Stackhouse’s frustration at the current situation.

To further understand Robbins’s potential impact, one must examine Quentin Millora-Brown’s role on the court these past few games. Against Georgia, Millora-Brown had a team-high plus-minus of plus-16 in just 20 minutes on the court. He was taken out early because of foul trouble, and both the offense and defense suffered greatly without a true number 5 down low.

In the last three, he’s played an effective two-man game with Pippen Jr.; facilitated ball movement around the perimeter and in the paint; snagged eight offensive boards; only turned the ball over five times; and also added six blocks to prove his strong defensive presence. The senior has played his heart out this year, taking huge steps forward when it counted most, but having said that, Robbins can take over this role and add more dimensions to the group’s attack. Additionally, in this case, Stackhouse would have real depth at center, limiting the adjustments that have to be made mid-game and the slim margin for foul trouble that has plagued this group of late.

Every player goes through rough patches. Even great players struggle from time to time, but the thing that makes them great is how they bounce back from a slump.

Pippen Jr.’s point totals in his last three games (13, 18 and 6) may not initially seem problematic, but when you look deeper, it’s easy to see that all the defensive attention he’s getting is testing his game. Twenty of his 37 points have come from the charity stripe, and though drawing fouls is a staple of his style, his shooting has been suspect—he went 3-of-12, 3-of-10 and 1-of-10 from the field against Georgia, Tennessee and Florida, respectively. He also had eight turnovers and a minus-14 point differential when on the court in the three matchups.

Now, to immediately backtrack on myself a little and make things clear: This is not to say he isn’t a great player. He obviously is. This is also not to downplay the impressive defense of each opponent, as all three teams brought double teams and specially prepared tactics to limit the guard’s effectiveness. And, it’s also not to say that his struggles are his fault alone, considering much of his great play was negated by poor team shooting. But, elite players find a way to win.

Pippen Jr. has certainly been asked to do too much, but he’s also forcing himself into bad shots and foul trouble. He must let the game come to him and play poised, calculated basketball. Though it may seem counterintuitive, accepting the role he’s offered, rather than forcing it, will ultimately lead to better situations for the Commodores.

Indeed, the best competitors bring the level of their teammates up a notch, rather than sink to their floor. At different points in each game, Pippen did exactly this. He drove to the rim, found space in the paint, hit a crucial 3-ball, made a defensive stop and more, then he got his surrounding cast involved with his typical extraordinary court vision. This Pippen Jr. only came through in spurts the past two weeks, though. So, I’m challenging Scotty to make me look like an idiot.

I hope I look back on this column a month from today and wonder what I was even thinking.

“As presently constructed, we’ve got to almost play perfect basketball [to win], and that doesn’t happen all the time,” Stackhouse said after the loss to Tennessee.

Well, Vanderbilt has been far from accomplishing this task as of late. They’ve made careless errors on everything from in-bound plays to routine layups, but they have time to change their ways.

Vanderbilt’s next two games are very winnable. First, they get a rematch against a South Carolina team they lost to by two points in heartbreaking fashion. The Commodores need revenge if they’re to stay relevant in the SEC. Then, they’ll host Georgia with students (!!!) in the stands again. If all goes well, the Commodores will ride their momentum into Rupp Arena and try to upset No. 12 Kentucky, who bested them earlier this year, 78-66.

No SEC game is a given, and Commodore fans have to hope their shooting luck changes. With a few friendly rolls, this offense can get going in a hurry. Additionally, watch out for Vanderbilt’s defense to provide the team’s offense. Stackhouse opted for full-court pressure against the Bulldogs in their first matchup, and it worked like a charm. The tide of the game shifted with the defensive adjustment, so I suspect he’ll return to this tactic again soon.

“We’ve got to look at it [the rough stretch of games] as an opportunity to learn and grow,” Millora-Brown said after the loss to Florida. “I think that there’s a lot that we can learn from each game that we play, and especially so for losses. We can’t let ourselves get down on this. We had a bad night, and we have to bounce back next time.”

Millora-Brown’s wise words are more true than ever. With Robbins and Chatman possibly returning in a few short weeks, the Commodores must stay optimistic. They must learn from their mistakes, make their open shots—which they’ve been getting plenty of, credit to Stackhouse—and remain angry defensively.

And, completely off subject, is there any way to donate a foot or perhaps a hamstring to a Commodore in need?