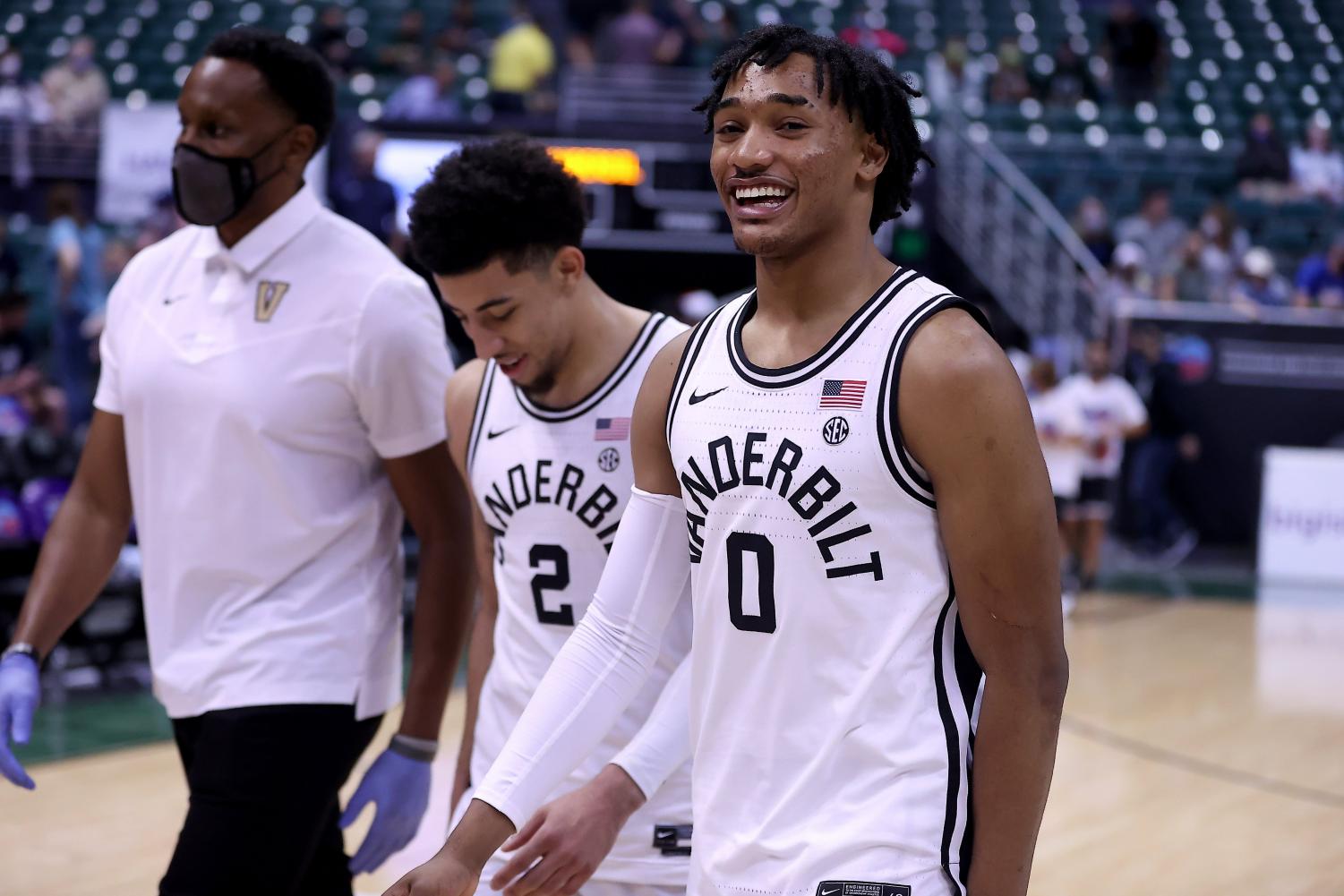 Vanderbilt is undefeated since Rodney Chatman entered the lineup, including their best win of the Stackhouse era. Can they carry the success into SEC play?

“Disappointing to say the least. Just felt like that it was a game that we needed to get. [I thought] we’d be angry from how the SMU game ended up and come out with a whole lot of energy,” head coach Jerry Stackhouse said following his team’s 72-68 overtime loss to Temple on Dec. 7.

It was a familiar feeling for Stackhouse’s Commodores who dropped to 5-3 with the loss and would fall to 5-4 after a loss against Loyola Chicago later in the week. It appeared that Vanderbilt might be heading down a familiar path of a winter full of meaningless basketball in SEC play.

The graduate transfer from Dayton has revitalized Stackhouse and the Commodores, who are 3-0 since their defeat against Loyola Chicago and since Chatman entered the rotation. Along the way, Vanderbilt picked up a championship trophy in the Diamond Head Classic after a forfeiture from Stanford in the tournament’s finale.

Vanderbilt will finish the nonconference portion of the schedule at 8-4 as they prepare to head to Fayetteville for a clash with the Arkansas Razorbacks on Jan. 4.

This week’s edition of Memorial Minutes on the importance of the tournament victory in Hawaii and the state of the team heading into conference play.

Let’s take a look back at mine and Justin’s preseason mailbag to see how I did in terms of nonconference expectations:

“It is all going to come down to staying healthy. Assuming Robbins and Chatman progress well enough over the next couple of weeks to come back at full form, I like Vanderbilt to have a solid showing in the nonconference. It’s not a slate that’s overly difficult, but there’s still some good tests in there that will reveal a good bit about the trajectory of this team. I’ll split it up into a couple of buckets. Vanderbilt should go 5-0 against Alabama State, Texas State, Mississippi Valley State, Austin Peay and Hawai’i. Anything less than that represents the floor. Then there’s a couple of winnable games against teams around or outside the top 100 in KenPom: VCU (No. 98), Winthrop (No. 155), at Pittsburgh (No. 145) and Temple (No. 106). With Chatman and Robbins, you feel pretty comfortable against each of these teams, but they will both likely be out for all of these contests. That said, if Vanderbilt can go 3-1 or 4-0 against this crop of teams you start to feel really good about the postseason outlook. 1-3 or 2-2 would be closer to the floor. Then there’s the two hardest contests: at SMU and home vs. Loyola Chicago. Split those and you feel great—I’m thinking 0-2 is the likely case if no Robbins or Chatman, though. Lastly, there’s the second and third legs of the Diamond Head Classic in Hawaii. BYU is probably a loss, South Florida probably a win so we’ll say 1-1 there. So, in sum—ceiling is 11-2, floor is 7-6. Thoughts?”

I think pretty good, ghost of Christmas past Bryce!

In all seriousness, something I have mentioned to Justin all fall on the Hustler Sports 30 podcast is that the nonconference is a series of give and takes: for every loss Vanderbilt “gives” up in the early part of the season, there’s an opportunity to “take” a win back and even out the expectations prior to conference play.

Vanderbilt’s recent three-game winning streak has featured wins over Austin Peay, Hawai’i and most importantly, BYU. As I said in the mailbag in November, I had this one chalked up as a loss. BYU was ranked No. 22 on KenPom coming into the Festivus Day contest against the Commodores and throttled South Florida in the opening round of the tournament. An opportunity for a major resume building win. A game to “take”.

The triumphant outcome over the Cougars was massive for Vanderbilt for a number of reasons. First off, the victory reset the nonconference outlook for Vanderbilt—at 8-4, the Commodores have legitimate reason to start to think about their postseason future again. And the advanced stats agree—after dropping to as low as 92nd on KenPom, Vanderbilt has roared back to 72nd, more closely aligned with their preseason expectations when they were rated at No. 77.

Second, the win was undoubtedly the biggest of the Stackhouse era. While the SEC streak-ending victory over undefeated-in-conference LSU was fun in 2020, it was just that: fun. That game didn’t matter at all, as Vanderbilt was sitting at 8-13 on the season without their best player Aaron Nesmith.

This, on the other hand, was a meaningful, resume-building win over a legitimate top-25 caliber opponent. It was a back-and-forth contest that saw the Commodores overcome a five-point halftime deficit (something they’ve struggled to do this year) and repeatedly answer the bell in the second half. It featured incredible grit from the star Scotty Pippen Jr. and his cast mates Jordan Wright and Quentin Millora-Brown, among others. Most of all, it ensured that for the first time since 2017, Vanderbilt will enter SEC play with its eyes on March. And, damn, is that nice for a change.

Another component of Vanderbilt’s recent three-game run has been an unveiling of the makeup of this team. The identity through 12 games of this year’s Commodores? Try the SEC Player of the Year and some good ol’ defense.

Through the first few weeks of the season, Stackhouse mixed and matched his lineups as he dealt with a team of more new faces than old. The offense seemed stagnant, but the defense had quietly improved with the influx of talent and athleticism across the roster.

To steal from the introduction of this column, insert Rodney Chatman.

The senior’s arrival has signaled the emergence of this defense from frisky to just plain good. Chatman’s ability to switch onto the 1, 2, and 3 spots on opposing offenses and play hard-nosed perimeter defense has supplemented an already across-the-board improved defensive attack.

Perhaps most improved, and impactful, has been the play of Millora-Brown, who has been nothing short of an absolute anchor defensively for the Commodores. The junior’s leap from last season has been impeccable. Millora-Brown’s advantage this season has been that he is incredibly disciplined and executes consistently in the half-court defense.

Against BYU, he was there to contest the Cougars’ drives to the rim time and time again, affecting shots even if he wasn’t blocking them and taking a number of charges. With Clevon Brown and Dylan Disu out the door via the transfer portal, Millora-Brown’s evolution as a bona fide rim-protector for this defense has been massive. To boot, he’s rated 68th in the country in offensive rebound percentage via KenPom and has simply played within his role on that end.

“Q was awesome. Just super proud of how he’s gotten better and better. He was dominant on the boards, had a couple of blocks. He made one out of two of his free throws, so I guess it wasn’t all perfect, but he did a lot of good things for us,” Stackhouse said after Millora-Brown’s 13-point, 14-rebound double-double against Austin Peay.

Pippen Jr. and Wright have carried the team offensively, but their strides defensively cannot be understated. Both have gotten much better at sliding around the 3-point arc and playing without fouling. Myles Stute, who scored 14 points and played his best game of the season in the win over BYU, has taken strides on the defensive end as well. If the sophomore can emerge as a consistent 3-and-D forward for Vanderbilt, things could get really interesting in league play. And top-100 recruit Shane Dezonie has come into his own lately and possesses as much defensive athleticism as anyone on the Commodore roster.

As for the offensive attack, Vanderbilt will need more than three games to prove that they are cured in that regard. They are still shooting just under 30 percent from deep as a team and boast an effective field goal percentage that rates 262nd in the country. But, again, Chatman has been helpful on this end—at least just to impact ball flow and give Vanderbilt another ball handler they can be confident in. After limping to under 60 points in a loss to Loyola Chicago, the Commodores have scored 68 or more points in each of the last three games.

And they seemed to find a repeatable strategy late in the second frame against BYU: get Pippen Jr. the ball, going downhill. The sensational junior scored the final 16 (!) points for Vanderbilt by charging at the rim over and over against the overmatched Cougars. He’s averaging 20 points per game on 46 percent shooting from the field since Chatman’s return and now leads the SEC in scoring at 18.1 points per contest on the season.

Letting Pippen Jr. operate more off the catch, in transition and going towards the rim has been a huge development for Vanderbilt. Again, Chatman’s addition has allowed Stackhouse to do this—having a skilled facilitator bring the ball up has created different opportunities for Vanderbilt to get Pippen Jr. into those advantageous positions where he becomes nearly impossible to slow down. It is reminiscent of what made the Pippen Jr.-Saben Lee duo so effective in Stackhouse’s scheme in his first year.

Now, for the meat of the schedule: SEC play. KenPom projects the Commodores to finish at 7-11 over their 18 game conference slate, which would surpass the amount of SEC wins Stackhouse has accumulated in his first two seasons at the helm combined.

But for Vanderbilt to make a push towards March, they’re going to need to get closer to nine or 10 league wins. With the way the team has played on their three-game win streak, that is certainly within the realm of possibility. Look at it this way: Vanderbilt gets Georgia and South Carolina twice and Missouri at home on their schedule. If this team is progressing like it should, that is five wins. Can they find four or five more?

It starts out with a trip to Arkansas to face the Razorbacks. Eric Musselman has another solid squad in Fayetteville with a plethora of talented transfers, but this isn’t a team that is any better than the one the Commodores just beat—Arkansas has lost two of three, including a home game against Hofstra. While the cancellation against Stanford was a downer, it is undeniable that Vanderbilt is carrying as much momentum as it has all season coming into the SEC opener. Add in the 11 days of rest Vanderbilt will have between their games to get healthy and this figures to be another real opportunity for Stackhouse’s crew to add a marquee win.

That rest is vital for guys like Chatman—who is self-proclaimed “still not 100 percent”—and Jamaine Mann, who sat out both games in Hawaii. And that’s 11 more days of rehab for perhaps Vanderbilt’s final missing puzzle piece: Liam Robbins.

Robbins was without his boot in Hawaii for the first time all season and by all accounts is nearing a return. Adding the skilled 7-footer into the mix sooner rather than later would spice things up in a big way for this Commodore team in conference play. That leaves Vanderbilt in an enticing spot as they hit conference season.

We’ve seen the instant impact that Chatman was able to have this Christmas season. Can Robbins usher in the New Year with more cheer?