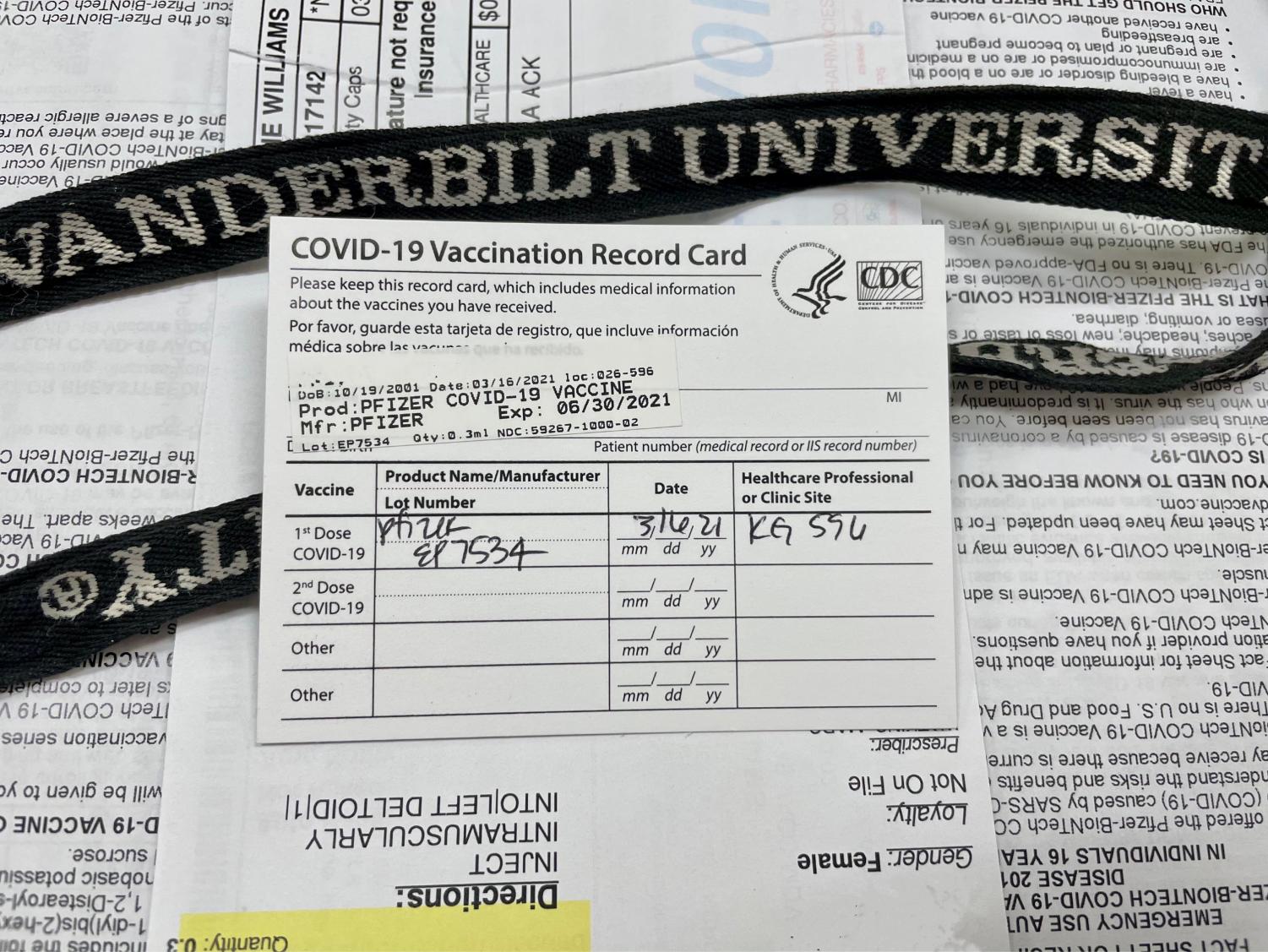 A vaccine card, as photographed on March 19, 2021. (Hustler Multimedia/Hallie Williams)

An overview of President Joe Biden’s Executive Order 14042, Senate Bill 9014 and a Nov. 30 federal court decision, and how they could affect the university’s ability to mandate vaccine and mask protocols for employees.

A Nov. 30 federal court ruling caused confusion surrounding Vanderbilt’s ability to enforce vaccine and mask mandates for their employees given a pre-existing Tennessee state law. The ruling issued a preliminary injunction of President Joe Biden’s Executive Order 14042 (EO 14042) for Tennessee, Kentucky and Ohio, which had previously allowed Vanderbilt to continue mandating masks and vaccines despite a state law prohibiting them from doing so.

Senate Bill 9014, signed into law by Tennessee Governor Bill Lee on Nov. 12, prohibits schools from mandating vaccines, requiring proof of vaccination and mandating masks with certain exceptions. Vanderbilt was initially still permitted to issue these mandates as they were issued an exemption from this law by the Tennessee Comptroller of the Treasury, as abiding by the law would put them in non-compliance with EO 14042, thus risking their federal funding.

However, following the Nov. 30 injunction, the Comptroller’s Office suspended Vanderbilt’s exemption from the law as following it would no longer mean violating EO 14042, raising questions surrounding their ability to continue mandating vaccines and masks. All 69 exceptions that the Comptroller originally issued were suspended because their federal funding is no longer at risk due to the court’s ruling.

On Nov. 5, Vanderbilt updated their COVID-19 protocols to comply with Biden’s EO 14042, specifying that both employees and visitors to campus were subject to new distancing and masking protocols. The order also mandated that all employees of federal contractors were required to be fully vaccinated by Dec. 8, 2021, unless they had obtained a legal exception.

Prior to the executive order, the university had already required all students, postdocs, faculty and staff to be fully vaccinated or to have an approved accommodation; however, the order slightly modified pre-existing distancing and masking protocols. Under the order, vaccinated and unvaccinated students were expected to wear masks indoors even when physically distanced.

On Nov. 12, Senate Bill 9014 was signed into law by Lee. The bill prohibited schools from mandating COVID-19 vaccines or requiring proof of vaccination as a requirement to access facilities or receive their services. It also prohibits schools from requiring mask-wearing on school property with a series of exceptions.

“Tennessee Gov. Bill Lee’s office warned lawmakers that their sprawling bill limiting COVID-19 restrictions would violate federal law that protects people with disabilities and put the state at risk of losing federal funds, according to records obtained by The Associated Press,” a Nov. 20 AP News article reads. “The Republican-controlled Legislature ignored the advice and passed the bill anyway. Less than two weeks later, the Republican governor signed it into law.”

A federal judge immediately blocked the law from going into effect until he could weigh the arguments. He gave attorneys until Dec. 2 to file documents, per a Nov. 18 article from the Tennessean.

In addition to the federal judge’s decision to block the implementation of Senate Bill 9014, Vanderbilt received a “COVID exemption” from the law by the Tennessee Comptroller of the Treasury by Nov. 15, meaning they were not expected to follow it and could continue mandating vaccines. The exemption was granted because compliance with the state law would contradict EO 14042 and, therefore, jeopardize Vanderbilt’s federal funding.

On Nov. 30, a federal judge issued a preliminary injunction against EO 14042, ruling that it exceeds Biden’s authority.

“The Government is ENJOINED from enforcing the vaccine mandate for federal contractors and subcontractors in all concerned contracts in Kentucky, Ohio, and Tennessee,” the ruling reads.

The judge explained in the ruling that the plaintiffs (Kentucky, Ohio and Tennessee) presented a two-fold argument to prove EO 14042 unconstitutional: it both exceeded presidential executive order authority and was not implemented with “proper administrative procedures.”

“The Court is asked to wrestle with important constitutional values implicated in the midst of a pandemic that lingers,” the ruling reads. “These questions will not be finally resolved in the shadows.”

On Dec. 1, the day after the court ruling, the Comptroller’s Office subsequently suspended all exemptions—including Vanderbilt’s—from Senate Bill 9014 as a result of the injunction.

On Dec. 3, Eric Kopstain, Vanderbilt’s vice chancellor for administration, addressed the federal court ruling in an email to the Vanderbilt community, emphasizing the university’s low COVID-19 case numbers and encouraging students to receive their COVID-19 booster and flu vaccines before leaving for winter break.

“We are assessing a recent federal court ruling and related action by the Tennessee state government to determine what changes to our current protocols may be appropriate in light of these developments,” Kopstain said.

On Dec. 6, Kopstain sent a follow-up email to the Vanderbilt community in which he acknowledged that the court ruling has “the potential to affect” the university’s ability to mandate vaccines for students, faculty and staff. However, the protocols outlined in the email for the remainder of the semester are consistent with those from the start of the academic year.

“After closely evaluating the requirements of these recent legal actions, the university has determined that for the remainder of the fall semester it will require all faculty, staff and students to either participate in routine on-campus COVID-19 testing or provide proof of full vaccination against COVID-19,” the email reads.

The email also linked protocols regarding masking, distancing and vaccine requirements from the start of the 2021-22 academic year, noting that they will stay in place for the remainder of the semester. However, the masking protocols linked in the email contradict the current protocols, which were put in place on Nov. 5 following EO 14042. The protocols linked in the email state masks are not required in indoor spaces if physical distancing can be maintained.

“Masks are now required for fully vaccinated individuals indoors, including in common areas or shared workspaces (open-floor plan offices, cubicles and conference rooms) even when physical distancing is possible,” the updated protocols read.

UTK originally suspended its mask mandate on Nov. 15, only to reinforce it 24 hours later to comply with EO 14042. A day after the Nov. 30 federal court ruling, however, UTK re-dropped all mask mandates as well as the employee vaccine requirement put in place in response to EO 14042.

“In compliance with the state law, we are lifting the mask requirement effective immediately and suspending the requirement to meet the federal vaccine mandate while the legal process continues,” a message from the office of their president reads.

The statement emphasizes UTK’s status as a state institution in explaining its decision to change its policies following the preliminary injunction.

This story will be updated as more information becomes available.