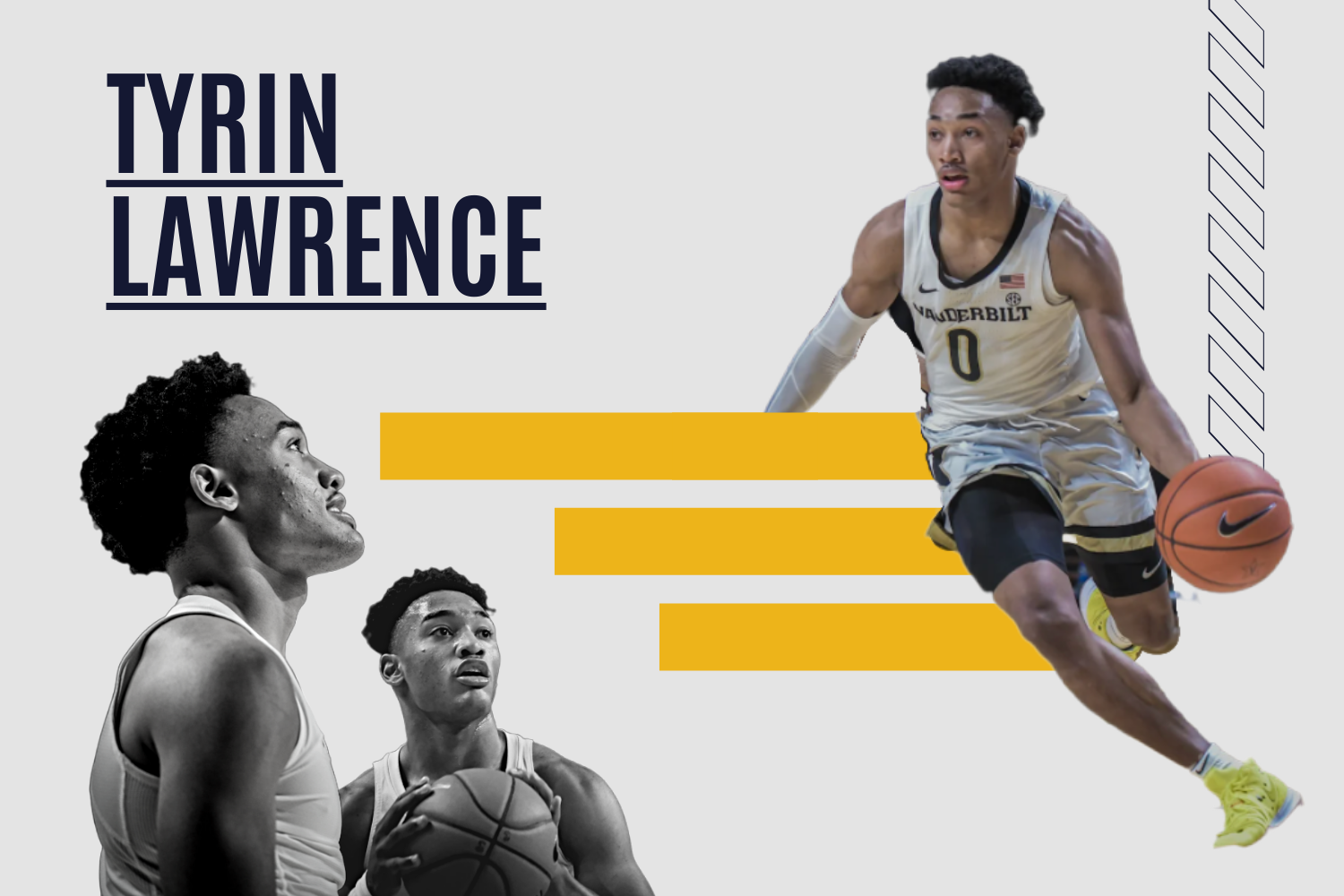 After tearing his ACL in January, sophomore guard Tyrin Lawrence has had a big impact for the Commodores so far this season. (Hustler Multimedia/Emery Little) (Emery)

After tearing his ACL in January, sophomore guard Tyrin Lawrence has had a big impact for the Commodores so far this season. (Hustler Multimedia/Emery Little)

Tyrin Lawrence tore his ACL just seven games into his collegiate career. However, thanks to his commitment and determination, he’s recovered quickly and is back on the court for the Commodores, showing out for his family and his nine-month-old son, Kylan.

Every athlete dreads three letters: A, C and L. The knee injury sidelines a player for eight months to a year, although it’s often said that it takes twice as long to truly regain one’s prior strength and flexibility. It can stunt an athlete’s growth and derail a promising career. This is especially true for a sport like basketball that relies on a player’s knees for abrupt changes in direction and rapid elevation.

Yet, with each passing game, sophomore guard Tyrin Lawrence is defying these concerns.

The ACL bug stung him just seven games into his freshman campaign. He was already having a successful year, starting the team’s first game of the season and even scoring 14 points in that win over Mississippi Valley State. His athleticism and ability to play above the rim highlighted why he earned just under 13 minutes per game of playing time as a freshman. The knee injury threatened all of this progress, but Lawrence has shown extreme perseverance and has come back more motivated and prepared than ever.

Lawrence grew up in Monticello, Georgia, a small town an hour away from Atlanta, with his mother and two siblings, De’Ivion and Tayloir. After great success at Morgan County High School—his team won the 2019 3A state championship while he received the 3A state player of the year award that same season—Lawrence did a post-graduate year at Sunrise Christian Academy in Bel Aire, Kansas.

“Going to Sunrise definitely allowed me to work on my basketball, just focus on improving my skills,” Lawrence said. “It was in the middle of nowhere, so all we basically had to do was play basketball.”

With this post-grad season, Lawrence garnered attention from major programs such as Gonzaga, Ole Miss, California and Kansas State. Yet, West End called Lawrence’s name a little bit louder. He saw the promise in head coach Jerry Stackhouse’s program and knew he could fill a crucial role for years to come. Nevertheless, he’s had to work on his style of play.

“Playing with Scotty [Pippen Jr.] and other great point guards, I’ve been doing both [on the ball and] off the ball [work],” Lawrence said. “[I’m] just learning how to catch and shoot, play off the ball, screen for others—stuff like that.”

Impressively, Lawrence has made these adjustments to his game during a summer of physical therapy, a time which was truly challenging for him. He had never been injured before and, therefore, hadn’t experienced such a long, grueling process of rehabilitation.

“When I first tore my ACL, I was devastated. This was my first time ever being hurt. So, it definitely was different for me, being away from the game for so long. But through the process, I’ve learned how to overcome adversity,” Lawrence said. “It definitely molded me into a better person, not only on the court, but off the court too.”

Lawrence’s life off the court was also shaken up this offseason, as the second-year man had a child, Kylan, just two months after tearing his ACL in January. Naturally, Kylan has only given Lawrence more motivation to return to form.

“He means a lot to me. Every day I wake up, my purpose is just to go as hard as I can for him,” Lawrence said recently on the Anchor Down Podcast. “He definitely keeps me going. He’s been a big driving factor in my success coming back from injury—just playing the best I can play. So, he’s definitely in the back of my mind, knowing I got to feed him.”

This period was undoubtedly one of the most testing times in Lawrence’s life. Directly coming off surgery, he had to balance basketball with a family and son who lived in Georgia, hours away from his constant rehab on West End. Thankfully, Stackhouse and the coaching staff helped Lawrence throughout the process.

“They worked with me. They allowed me to go home when I could and see him, be there for his birth,” Lawrence said. “I’m just thankful. Coach Stackhouse [and the rest of the coaching staff], they’re very understanding and they made it much easier.”

However, despite all of this excitement in Lawrence’s personal life, his progress throughout his recovery was isolating.

“It was basically just me, my physical trainer and my strength coach. So, even though I was with them, it felt like I was alone in that I did a lot of work by myself, without my teammates,” Lawrence said. “I definitely felt isolated.”

His setback changed the way he approached every practice and game. He stopped taking opportunities to play for granted and started appreciating each day of work.

“The injury taught me to take every opportunity I get, to make the most of it,” Lawrence said. “Before the injury, I knew I’d come back the next day and it’d be the same thing, but when I got hurt, I was taken away from [playing]. I think I just take everything more seriously now.”

Stackhouse recognizes that Lawrence is getting “stronger and stronger,” and he’s rewarded this improvement in play with more minutes and a consistent role in the starting lineup.

“It’s good to see him back out there,” Stackhouse said. “He looks good.”

Indeed, both coaches and teammates alike are recognizing the impact of a player like Lawrence. He adds to the Commodores’ hard-nosed defensive identity and is respected as one of the most proficient and skilled drivers on the squad.

“Tyrin has been a really big addition [this year],” junior Jordan Wright said. “He really knows how to get downhill, use his speed, his quickness. He’s also a menace on defense. He gets in passing lanes and is really athletic.”

Recently, against Winthrop, Lawrence had the best game of his young Commodore career. He eclipsed 20 points for the first time, shooting 78 percent from the field and going a perfect 2 of 2 from beyond the arc. He also racked up five rebounds and two assists in a career-high 31 minutes on the court. To make his performance that much more meaningful, this was the first game Kylan watched his dad play.

“It was his first time [seeing me play],” Lawrence said. “Maybe he was a good luck charm.”

Lawrence’s play against Winthrop has catapulted his progression and helped him settle into his role on the team, demonstrated by his 17 points, five assists and four steals over the course of the next two contests—Pittsburgh and Mississippi Valley State. Even so, Lawrence’s playing time might fluctuate going forward due to the return of transfer guard Rodney Chatman, yet the sophomore remains focused on improving each day and helping the team reach its potential.

“For me, I want to get better each game. I’m coming back from a major injury, so I just want to do the best I can,” Lawrence said. “I want to do whatever [I can] to help the team.”

The second-year man had an unlucky start to his Vanderbilt career. His ACL tear interrupted his long-awaited entrance to college ball, but the setback has launched Lawrence ahead of where he was last year, as a person and player. With his newfound perspective, Lawrence looks to show Commodore fans what they missed out on last year and what they can look forward to for the rest of his time in Nashville.