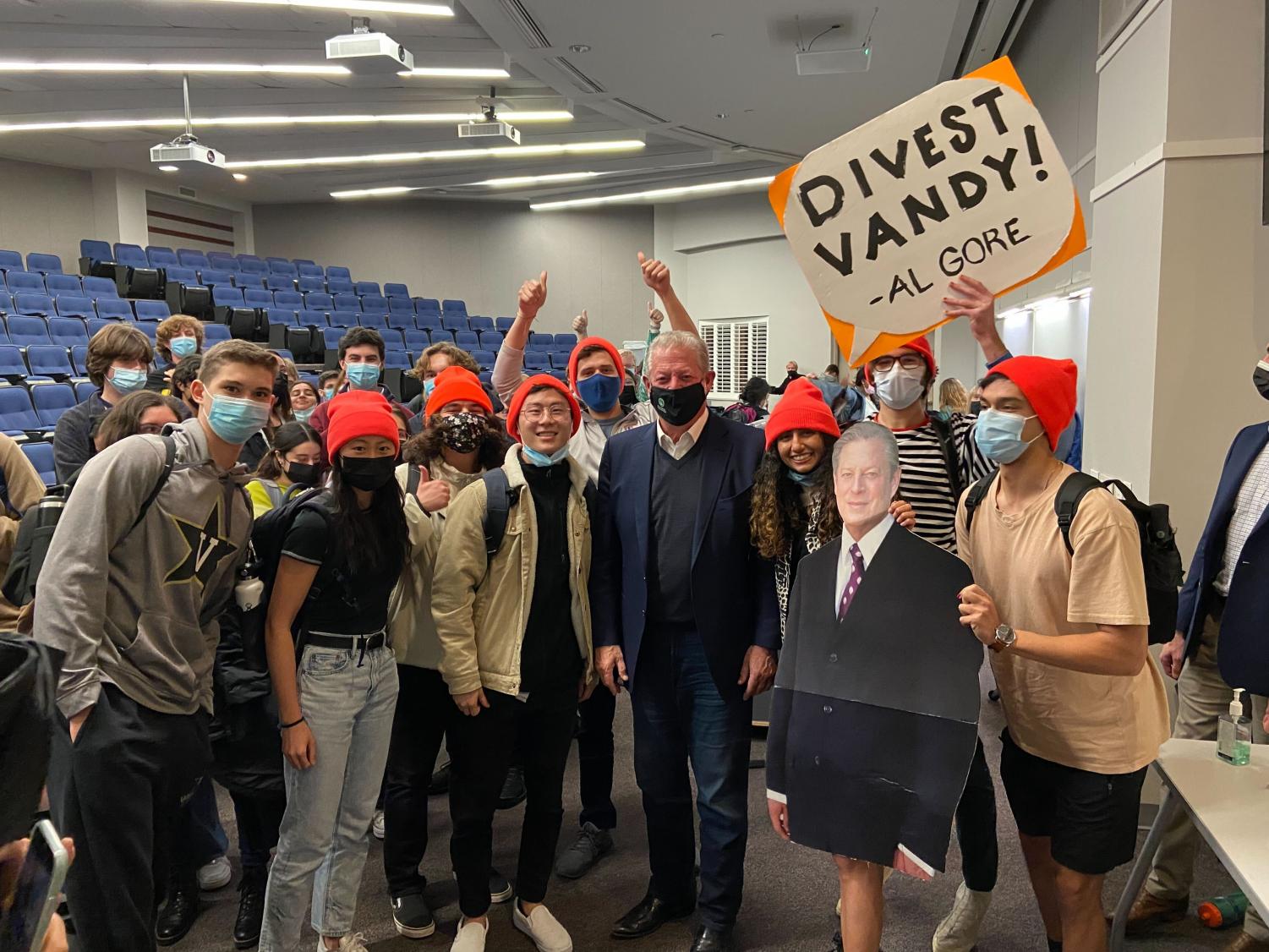 The former Vice President voiced his support for divestment when he spoke to the Unity and American Democracy class about the climate crisis and its intersection with democracy.

UPDATED: This story was updated at 9:00 a.m. on Dec. 10 to include additional quotes from Former Vice President Al Gore and new responses from Chancellor Diermeier.

On Dec. 1, former Vice President Al Gore—who was once enrolled in Vanderbilt’s Divinity School and later enrolled in the Law School—explicitly endorsed Vanderbilt’s divestment from fossil fuels. He was invited on campus to speak at the Unity and American Democracy class about the connections between the climate crisis and issues in democracy.

Gore also said the climate crisis is more urgent for young people and those of future generations.

“I’m here to recruit you; we need your help,” Gore said. “This is the challenge of your lives. If you do not feel that way now, trust me, you will because it is getting worse day by day.”

Gore went on to support his statement, stating that Vanderbilt’s climate policies are well-thought out and are positive in many ways, yet he reiterated that they were insufficient in regards to divestment.

“I really deeply respect your chancellor. I think he’s a great man and a great thinker, and he happens to be a friend as well,” Gore said. “Divestment is difficult for so many institutions…they know they ought to change it.”

Chancellor Daniel Diermeier spoke to the Unity and American Democracy class on Nov. 30, the day before Gore and reiterated the university’s unwillingness to divest from fossil fuels. He was previously asked about divestment in a Sept. 29 interview with The Hustler following Harvard’s decision to divest, following their divestment movement that was similarly endorsed by Gore.

Diermeier also cited endowment return goals as a reason the university continues to invest in the fossil fuel industry.

“T​​he reason we are taking that stance [to not divest] is that, number one, if we’re not maximizing the returns on our endowment, we can’t support our students and our faculty at the level that we can do that right now,” Diermeier said.

Gore addressed this argument that Vanderbilt and other universities have used to justify their continued investment in the fossil fuel industry, such as “safeguarding” endowment.

“People who’ve stayed in fossil fuels because there’s no principle to defend the endowment have lost their shirts on it.” He continued by explaining that the return on fossil fuels and their stocks have been negative for the past several years. “Those that continue to invest in fossil fuels, pretending that they can ignore the market realities, are going to continue to lose money,” Gore said.

“Those who believe that they can just wait this out and good old fossil fuel stocks will come through for us in the end, they’re nuts” Gore said. “We’ve got solutions that work right now, and those that continue investing in fossil fuels and pretending that they can ignore the market realities are going to continue losing money.”

Diermeier addressed Gore’s endorsement directly in a subsequent interview with the Hustler on Dec. 8.

“I have the highest respect for Vice President Gore. I know him well. I consider him a friend. And he’s one of our distinguished alumni from Vanderbilt. Among friends, we can disagree on certain things. And on this particular issue we disagree,” Diermeier said. “We should develop innovative solutions that can be used by others, but we should not prescribe what a particular policy solution should be. I don’t think that’s the role of universities.”

Following Gore’s statement, graduate student Miguel Moravec, a Dores Divest representative, expressed his gratitude for Gore’s support of the divestment movement at Vanderbilt and pledging to keep working towards that goal.

“We are here with you and we will continue advocating,” Moravec said. “A lot of the students in this room are going next week to a faculty senate meeting to introduce a divestment motion.”

Moravec proceeded to lift a cardboard cutout of Gore, and then placed an orange beanie on the cutout, signifying Gore’s solidarity with Dores Divest.

“I am so happy that Gore finally verbalized what the student body has been asking for all along—a push for Vandy to divest,” Irigoyen said. “Gore’s words really showcase how urgent and necessary it is for Vanderbilt to start reacting appropriately to the climate crisis. It’s obvious, now is the time to divest.”

“I think it’s unequivocally clear that he endorses divestment, not just at our school, but for every institution from fossil fuels,” Biabani said.

Gore outlined negative externalities of climate change, noting the significant effects of releasing  more than 150 million tons of man-made greenhouse gas pollution into the atmosphere every day. Per Gore, these effects include droughts and unprecedented fires in the West, a heat index of 165℉ in Iran, melting ice masses in Antarctica and Greenland and the recent floods in Waverly, Tennessee.

“The list of horribles goes on,” Gore said. “However, there is hope because science and technology have given us renewable energy, electric vehicles, regenerative agriculture, sustainable forestry and soon green hydrogen circular economies.”

As a result of the said climate crisis and subsequent increased unlivable conditions around the world, Gore cited an increase in climate refugees.

“We’ve had four times as many climate refugees this past year as all of the refugees from wars and conflicts in the world,” Gore said. “The respected Lancet Commission has predicted up to a billion climate refugees during this century unless we change course.”

“I knew Al Gore was coming to speak about climate change and I expected him to identify the climate change crisis and call us to action, but I did not expect for him to have such a firm stance,” Morinville said. “He was incredibly charismatic, compelling and sincere. Everything he said was interesting and made me want to hear more.”

Gore drew parallels between the global challenges of the COVID-19 pandemic and climate change. He referred to the need to listen to leading scientists, the similar disproportionate effects on poor and marginalized populations and the necessity to implement “miraculous” scientific solutions like mRNA vaccines and advances in biotechnology.

“With both the pandemic and the climate crisis, we must make a decision that we will save the future of humanity; that is what is at stake here,” Gore said.

Gore began by drawing a connection between the climate crisis and the Unity and American Democracy class he was addressing.

“In order to solve the climate crisis, we have to address the democracy crisis,” Gore said.

Gore referred to a constantly shifting information environment and the growing role of social media “echo chambers” as a main cause of people’s starkly contrasting views regarding the legitimacy of climate change.

Gore said the importance of diversity within the nation is key to the restoration of our democracy and its efficacy.

“Diversity on every matrix, but one, increases the wisdom of the crowd. Every difference adds to the collective ability to make the group way smarter than any individual in the group except for one,” Gore said. “If everybody has the same set of core values and sense of purpose and mission, then all of the diversity enhances the ability of that group to make really good decisions.”