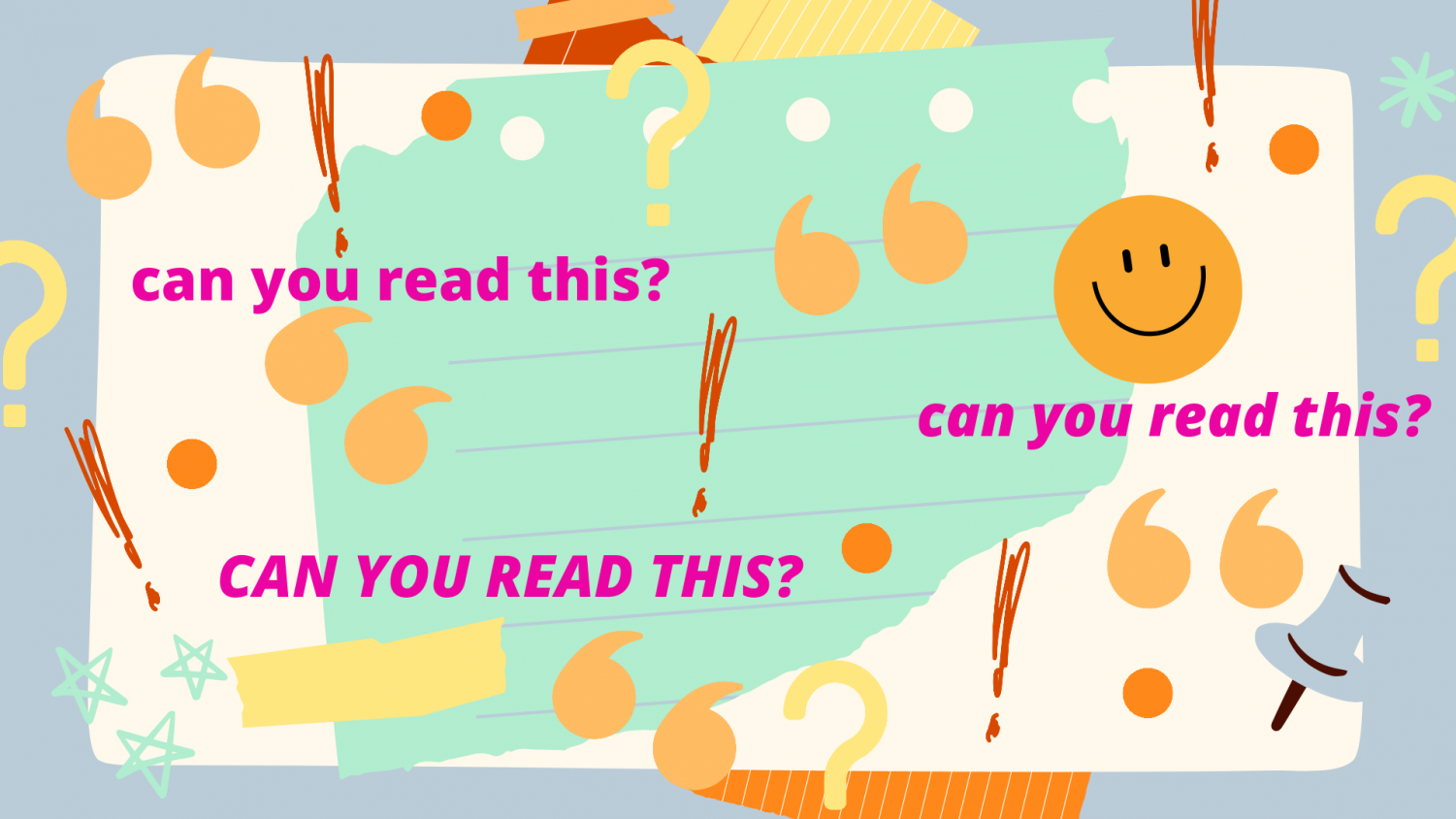 What part of socially-accepted academic writing is valuable and what parts would be helpful to rebel against? (Hustler Staff/Alexa White) (Alexa White)

What part of socially-accepted academic writing is valuable and what parts would be helpful to rebel against? (Hustler Staff/Alexa White)

WHITE: cAn you READ this???

By the time we make it to college, we all write in a formal, socially accepted manner. What if we questioned or rejected some of those norms in exchange for creative freedom?

I remember the first time we wrote our own poetry in my middle school classroom.

The teacher handed out some lined paper and we were allowed to develop our own creative poem. In the past, we had been asked to emulate the style of a famous poet as we learned all of the things that poetry could be, but this time it was up to us—completely.

Instead of writing a haiku or a sonnet with strict rules, I decided to write in the style my favorite book Inside Out and Back Again, a free verse novel by Thanhhà Lại about her childhood as a Vietnamese refugee moving to the United States. She wrote in free verse because it reminded her more of her home language and its poetic flow. I wanted to write like her, to have words spill onto the page without stopping for anyone.

That is the moment my infatuation with poetry began. You could do anything to indicate tone. You could spell things wrong on purpose, make up words and completely forget punctuation all in the name of meaning. You could capitalize any letters you wanted and change the shape of the text as long as you could justify your choices.

I soon learned that form was pretty much only negotiable when it came to poetry. Otherwise, if you left an ‘I” uncapitalized, you got a big, red circle on your paper (capital ‘I’ being something that began in the 13th and 14th centuries with Canterbury Tales). Imagine my disappointment when I got to the higher-level English classes and suddenly I was expected to write a certain way, tailoring my words and creative spirit only to the teacher who was grading my essay.

I understand that some ways of writing are distracting. If i do thiss iT distrcats u from what im saying because u are to worried about thee mistackes i am making. But, if I delineate and portray myself as an individual for whom diction and intonation matter deeply and on a massive scale, my pretentious terminology and language will likely be distracting as well—and you may entirely be lost when it comes to determining what, in fact, I ever had to say at all.

it is easier to put words

if you have the freedom

Sometimes I like to indicate tone with my words. I want you to know how I am saying things as well as what I am saying. We have various ways to indicate intonation through text, but they are not all typical and accepted manners of writing. While I am free to say things like, “I love that film,” it is less socially appropriate to say, “I LOVEEEEEE that film” even though they compel the little voice in your head to read it in a similar way.

My question is this: what part of socially-accepted academic writing is valuable and what parts would be helpful to rebel against? Is it really only through poetry that we can challenge traditional norms of conveying ourselves in the written form?

When I text my friends, one of my favorite things to do is add letters to the ends of words. That way, questions like “Hey are you coming?” don’t sound aggressive and confrontational. “Heyyyy are you coming?” sounds less like “I am tired of waiting for you,” and more like, “I’m here! Excited to see you soon, are you almost here?”

Using periods sounds formal and confrontational to me while exclamation points sound like I am excited, enthusiastic and respectful. My use of punctuation is driven by my desire to seem approachable and friendly and make a good impression on my professors. A single punctuation mark can change the tone of my message and my relationship with the recipient.

Check for periods, check for subject-verb agreement, check for oxford commas and run everything through Grammarly and proofread a thousand times, these are all messages we are told. But, do we need to write in these ways at all?

We have recently created new forms of written media, and although they each choose to ignore some common standards of writing, they all come with their own ways of writing that are unique to that format. Instead of policing punctuation, texting often relies on your knowledge of ttyl, brb, nvm, rn, dw, lmao and lol.

Twitter relies on your ability to shorten your statement and split it neatly into segments but allows for more freedom of word choice.

In classrooms, we ask kids to learn how to write without mistakes, sometimes more than we ask them to focus on the concepts that we want them to learn.

While we are creating new spaces for language, we are also showing what we value.

CAN YOU READ THIS.

Can you read this better?

Does this make the voice in your head say it softer?

WHAT AM I SAYING HERE

what am i saying here?

does it make ya cringe when i do tjis?

As an English major, I am likely in the minority to feel that a lot of the nitty-gritty grammar we focus on is occasionally unnecessary. I want to be able to write in the way that best expresses what I want to say, and sometimes that happens to be long, run-on sentences that flow like spoken language through the keyboard, onto the page, and into your mind. I want to be able to write like poetry and to feel how I felt the day I discovered the freedom of free verse.

In my future classroom, I imagine teaching a unit on different forms of writing: texting, handwriting, notetaking, summary, analysis, formal writing, grant writing, research report writing, thesis writing, announcement writing, news writing, close reading, five-paragraph essay writing, tweets, Facebook posts, songs, poems, short stories, fiction, nonfiction, slam poetry and so much more. I want to be able to name the freedoms of each and address the restraints of each form while asking students to push back and question these restraints.

There are certain advantages to being able to appeal to the social norms for written text. Spelling words correctly makes sure that the reader is not distracted by little things they notice on the page and can instead focus on the words as a whole. Proper punctuation ensures the reader pauses at the right spots and can change the entire meaning of the words on the page. But where is the creativity? Sometimes I want my words to JUMP OFF THE PAGE! When I get angry, or passionate I want the little voice in your head to change the way it reads my words and to engage differently with what I have to say.

I’m not arguing for total and complete literary chaos. I can absolutely see the need for standardization so we’re not strugginlng thu a SenTence that loooks like THIS. But I do want to take a minute every once and a while to see and question these norms and how they have been created to prioritize a certain type of narrative: no matter what you have to say, you have to say it right to get published or to be respected. Often, the times that we see respected authors publish something “counter culture,” such as Toni Morrison’s Beloved, they already had respect in the literary world. In 1987 when the novel was published, which a chapter containing no punctuation, Morrison had already been reviewed in the New York Times and nominated for multiple national awards. A writer’s fame may protect them from some of the criticism that they would have otherwise gotten for such a creative choice.

As a writer for the Hustler, there are certain standards that we have across all articles to make our website more cohesive. While this comes at the cost of some creative freedom, a lot of the standards that we follow will be things our writers will see if they work professionally in a writing or editing career. As a copy editor, it is my job to catch these stylistic errors that do not unite the piece with the rest of what has been published on the website. One thing we do in the Hustler is offering our edits as google docs “suggested edits.” Framing them this way shows the writers that this is just the way we think it should sound or look. While there is a reason for a lot of these style choices, writers certainly have some freedom to be creative, such as this article being published with intentional “errors.” Sometimes a writer will try something and it will inspire another section of the Hustler to begin doing something similar in their section.

In conclusion, (which is something I have been taught to say when what I really want to say is mic drop) question everything and accept nothing. Grammar is fake (but we haveee to follow it to be respected). Words are all made up (but your professor won’t let you say ‘misunderestimate’ because it’s not technically a word?). Oxford commas rule (but not in AP Style). Express yourself (as long as you don’t get points off for your choices).

The Vanderbilt Hustler welcomes and encourages readers to engage with content and express opinions through the comment sections on our website and social media platforms. The Hustler reserves the right to remove comments that contain vulgarity, hate speech, personal attacks or that appear to be spam, commercial promotion or impersonation. The comment sections are moderated by our Editor-in-Chief, Rachael Perrotta, and our Social Media Director, Chloe Postlewaite. You can reach them at [email protected] and [email protected]
All The Vanderbilt Hustler picks Reader picks Sort: Newest
Subscribe
Login
1 Comment
Newest
Oldest Most Voted
Inline Feedbacks
View all comments
M
Mia Burkholder

I keep coming back to this article. As my high school newspaper’s editor and a wannabe English teacher, I really connect with this. While I love grammar, it also limits the creativity of writers, and it can present a cultural, generational, and class divide over something that, as you said, is “fake.” I can’t stop thinking about it.