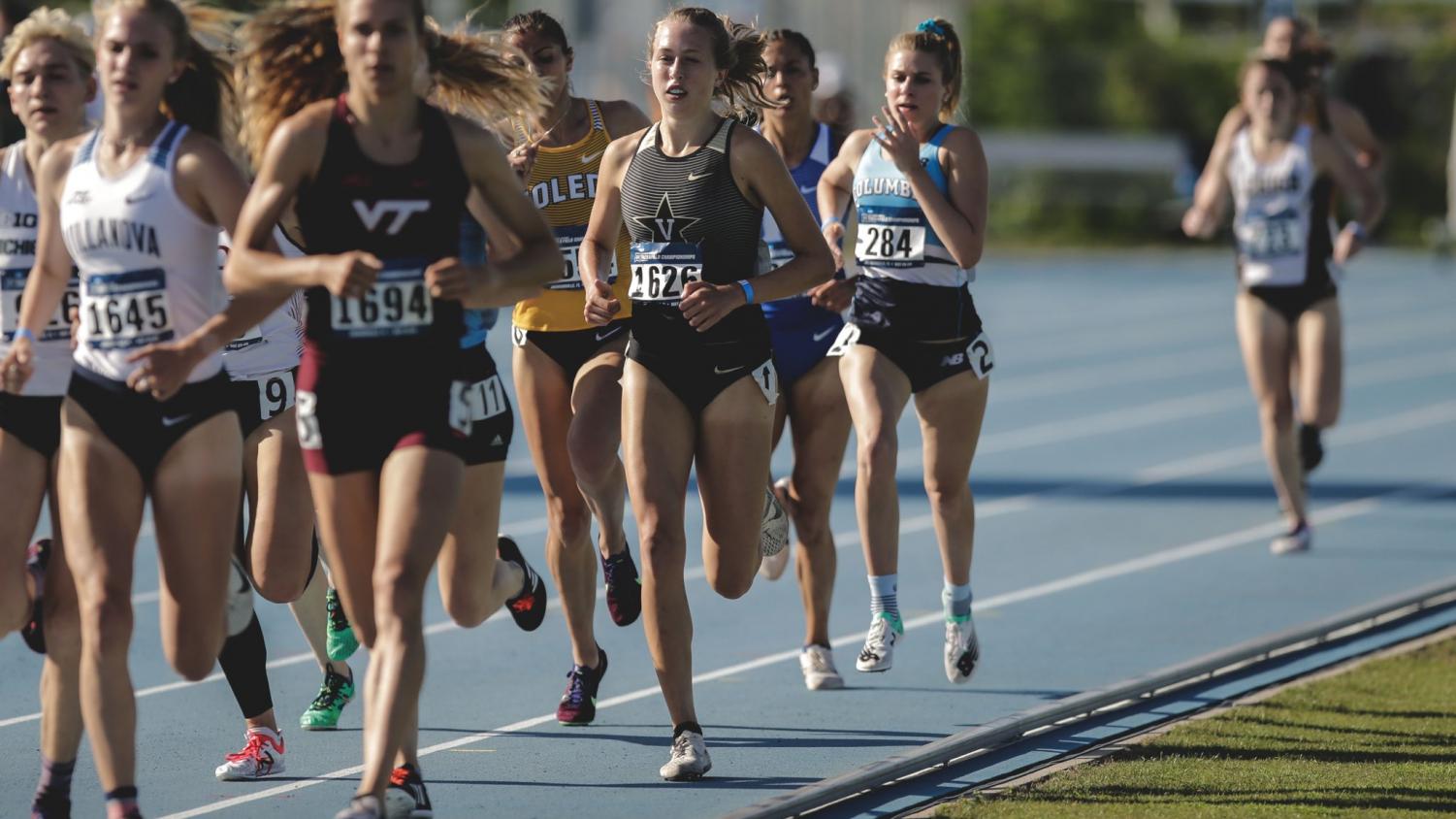 Grace Jensen has been the anchor the Commodores have needed throughout her time at Vanderbilt.

During senior runner Grace Jensen’s time at Vanderbilt, she has dealt with a lot, from a new coaching staff to pandemic-disrupted sophomore and junior years. Despite facing adversity, she continues to improve and be a leader for the women’s cross-country team.

Since the beginning of her career as a Commodore, Jensen has been a consistent and regular contributor to the team. Her freshman year, she finished among the top five Commodores at each race and recorded a personal best of 18:27.5 in the 5k at the Vanderbilt Commodore Classic and 20:44.2 for the 6k at the SEC Championships.

Jensen started to improve her sophomore year, scoring and finishing among the top two on the team at every meet. Her strongest performance was at the SEC Championships, where she recorded a time of 20:47.9 for the 6k, finishing first on the team and 16th overall, missing All-SEC honors by just two seconds.

During Jensen’s junior season, there were fewer meets to compete in due to COVID-related protocols. Despite this, she continued to develop and trend in the right direction.

“Last year was weird,” she told The Hustler. “There wasn’t really the same energy, but I’m thankful it was a real season. We only had like four meets and then SEC’s.”

Jensen finished first on the team at every meet during the 2020 season, and at the SEC Championships, she improved her 6k personal best to 20:35, pacing her team to a sixth-place finish and earning herself a spot on the All-SEC second team.

So far this season, the team has run in three meets, placing third, second and 20th overall respectively. Jensen has finished first or second on the team in each 5k contest thus far, and she also has recorded a new personal best at each successive race.

“I’ve been especially lucky that I’ve been able to improve thanks to good coaching and good teammates,” she said. “It’s really caused me to fall in love with the sport here.”

At the Mizzou Opener on Sept. 3, Jensen finished fourth overall with a personal-best time of 17:21.2, an improvement of over a minute from her former personal best at the 5k distance. Two weeks later at the Commodore Classic, she brought her 5k time down again, placing third overall in 17:10.4 to help bring the team to a second-place finish.

“We run the 6k for championship races, but for invitationals we do the 5k. I’d love to get my time to maybe 16:40 or faster for the 5k,” she said just before the Piane Invitational held in Notre Dame, Indiana, on Oct. 1.

As if almost speaking her goal into existence, Jensen notched another personal record of 16:46.3 at the Piane Invitational, the final 5k race of the season. She finished first on the team and placed 24th overall out of 197 talented runners.

Since her freshman year, Jensen has improved her 5k time by nearly two minutes, and her current personal best was run at a blistering pace of five minutes and 24 seconds per mile.

Up next, the team will run races strictly at the 6k distance—the Blazer Classic on Oct. 16, followed by the SEC Championships Oct. 29 and the NCAA South Regionals on Nov. 12. With championship season on the horizon, the talented upperclassman will look to close her season with a bang.

“For SEC’s, I’d love to place in the top 10 and hopefully bring some people with me,” she said. “I think also as a team, we have a chance to qualify for nationals—that’s always something we’re thinking about.”

Although Jensen only has a few meets left to cement her legacy, she is excited about the future and knows that her work is not yet done.

“As a senior, I want to be a leader and lead by example,” she said. “I want our team to compete and be confident and be there with the big dogs and big names and have fun with it.”

In addition to her work on the course, as one of the leaders on the team this year, Jensen has also been tasked with guiding Vanderbilt cross-country into a new era amidst a coaching change. Althea Thomas, the new director of the program, and Michael Porter, the new assistant coach, recently took the place of retired Vanderbilt head coach Steve Keith.

“The transition with the new coaches has been really smooth so far—they’ve been great,” Jensen said of her new coaches.

Thomas praised the leadership of Jensen, as well as Matthew Estopinal–a senior runner on the men’s team—so far this season.

“It’s always amazing having representation within the group,” she said. “Grace and Pesto [Estopinal] have led by example and bought into the mentality that ‘We are all Commodores.’ They are always working hard in the trenches, which is helpful from a coaching perspective. And their teammates love celebrating them and supporting each other. Whether it’s hanging out at the movies or eating in the dorms, our teams are cohesive groups that enjoy spending time with each other.”

The Commodores will have at least three more meets this year, and if they have a strong performance at the NCAA South Regionals on Nov. 12, they’ll have an opportunity to qualify for the NCAA Championships in Tallahassee, Florida, on Nov. 20—Jensen’s ultimate goal for her final stint on West End.