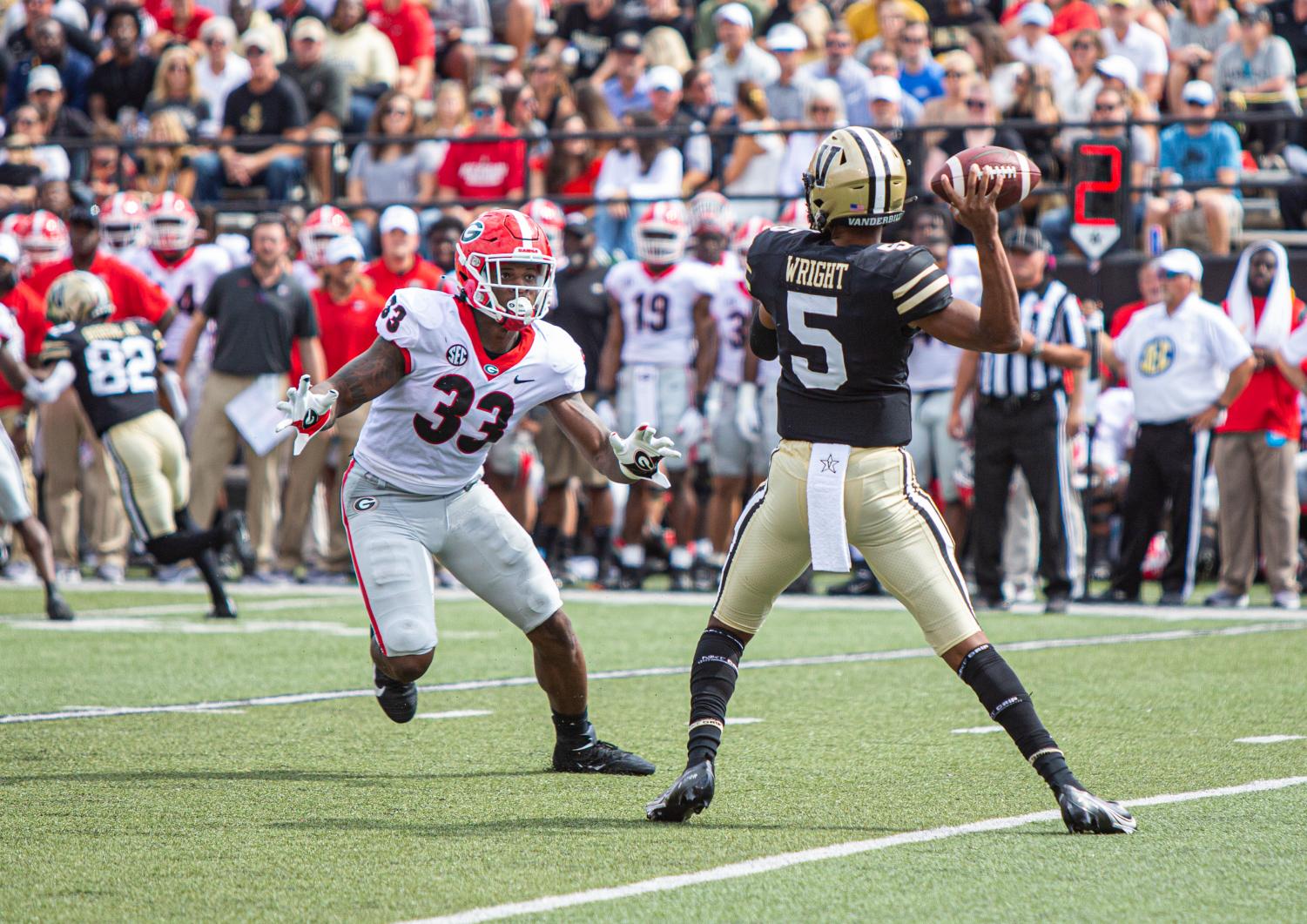 Vanderbilt dropped its first SEC contest of the season to the No. 2 Georgia Bulldogs in September. (Hustler Multimedia/Mattigan Kelly) (Mattigan Kelly)

Vanderbilt dropped its first SEC contest of the season to the No. 2 Georgia Bulldogs in September. (Hustler Multimedia/Mattigan Kelly)

In the first SEC game of his tenure, Clark Lea’s team was absolutely dominated by the No. 2 Georgia Bulldogs, demonstrating his roster is simply not yet fit for elite competition.

Before sitting down to write Commodore Brunch columns, I always re-watch Saturday’s game first. Sorry, but I refuse to do that today.

Besides the fact that it would offer me such little new information, Vanderbilt’s 62-0 loss to No. 2 Georgia yesterday was unwatchable in its first iteration. I can’t imagine sitting through it once again.

From start to finish, this was an absolute throttling. Many anticipated a rough afternoon for the Commodores—including Las Vegas, which put the line at 36 points—but the fashion in which it happened was simply startling. The game’s ending result was never in doubt, but I can’t say I expected eight Georgia touchdowns.

“From the start we were interested in Vanderbilt,” head coach Clark Lea said after the loss. “Georgia’s a good team and they deserve to be where they are in the rankings. They are playing at a high level but I am interested in when we can find our highest level performance.”

Lea’s team certainly didn’t find its highest level of performance on Saturday. The Bulldogs scored 35 points in the first quarter alone in their victory. 21 of those points were scored in the first seven minutes of the game, putting this one away before many Vanderbilt students even arrived. Two separate Bulldogs—Ladd McConkey and Brock Bowers—notched rushing and receiving touchdowns in the quarter, the first time a Georgia player has done that since Todd Gurley in 2013.

Vanderbilt totaled 77 yards of offense—just 15 more than Georgia’s point total. Three first downs, nine punts and two turnovers later, Vanderbilt got what it deserved: the Commodores were dog food on Saturday and the Bulldogs munched their way to a decisive victory in front of, well, a mostly red crowd.

I’ll fact check the first-year head coach: they do not have 100. But they have a lot.

“The [defensive] numbers speak for themselves,” Lea said of Georgia’s defense in particular. “They have done a great job building a roster and coaching that roster to a high level. They earned it today. They earned it in all three phases.”

To expect the Commodores to be remotely competitive in this game would have been foolish. And while the simple narrative that Vanderbilt football lacks talent may be overused, it’s just plain true. The current talent disparity between Vanderbilt and other SEC teams may be at an all-time high. For this program to elevate its status in the conference, recruiting efforts and development will have to change.

The Commodores were dominated in the trenches for the second consecutive week, surrendering yards of push on the defensive side and failing to buy time for Ken Seals and Mike Wright on the offensive side. Consistent pressure down the middle and off the edges accounted for much of Vanderbilt’s disastrous 1.7 yards per play average. And once again, a lack of pressure on the opposing quarterback left Vanderbilt cornerbacks on islands all afternoon.

There is a simple explanation for Vanderbilt’s lack of production on the defensive line this season and it revolves around these very issues. One sack in four games is certainly not going to get it done in the SEC and that was evident on Saturday.

The focus of this week in practice? According to the head man, controlling Vanderbilt.

“From the start we were interested in Vanderbilt,” Lea said. “We came out flat, we turned the ball over, we made mistakes in the special teams area. It doesn’t matter who you play against, you are setting yourself up for disappointment.” 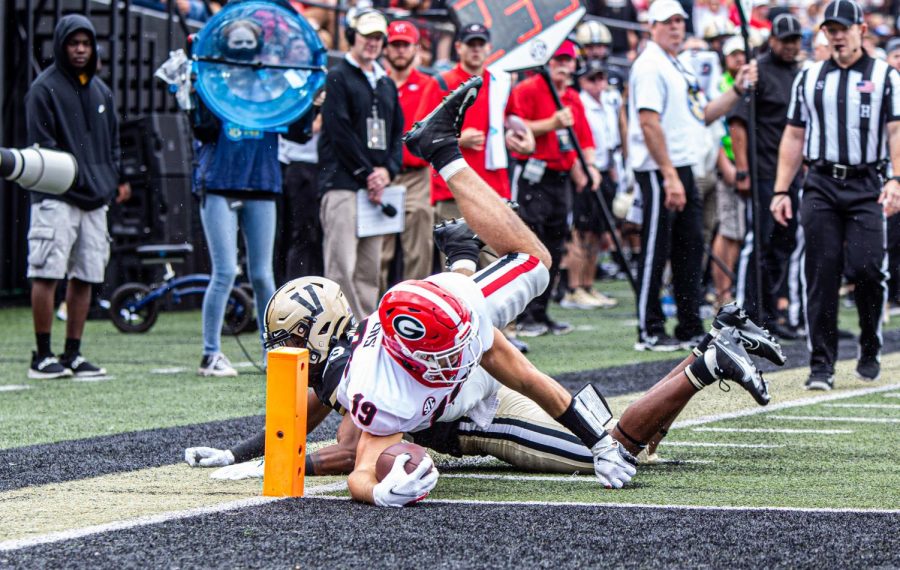 Without directly saying it, Lea is clearly pointing to the fact that a victory this week wasn’t in the cards. The first-year head coach was most concerned with how his team executed the processes and style that he is attempting to implement—it’s the right strategy for a coach leading a team with little chance at more than a single conference win.

But this week, Vanderbilt failed to live up to his expectations. For the third straight week, his team was not prepared from the get-go. In each of the Commodores’ last three games, they have surrendered a touchdown within the first four minutes of the game. This week, they surrendered five touchdowns by the first quarter’s end.

That is nothing but unacceptable and for a team that is already playing behind talent-wise, it basically digs Vanderbilt a grave each week. This group is far from learning how to win tough games but winning them by coming back from being down? Forget about it.

Much of what plagued the Commodores early was turnovers. The Ken Seals experience continues to be a roller coaster ride, as the sophomore made more questionable decisions on Saturday. A first-down interception midway through the first quarter allowed Georgia to extend their lead to 28 by going just 21 yards.

He often looked anxious in the shotgun, moving his feet quickly and hardly looking past his first read. I guess you can’t blame him—he had 6’6”, 340-pound Jordan Davis running straight at him quite a bit—but he has still failed to demonstrate the consistency fans were looking for after a promising freshman season.

It’s difficult to critique Vanderbilt’s gameplan very much considering it only ran 46 plays, but it’s clear the running situation will be a problem in Re’Mahn Davis’ absence as the coaching staff had no creative solutions on Saturday. Rocko Griffin, Patrick Smith and James Ziglor combined to run 16 times for 18 yards. That ain’t going to do it down the stretch of this SEC slate.

Ziglor also fumbled a kickoff return in the first quarter and that begs the question: why wasn’t Lea’s gameplan to simply fair catch every single kick all game?

Lea has to help Vanderbilt take care of Vanderbilt. And it didn’t appear that he did against Georgia.

Vanderbilt football is a ways away from competing against top-five SEC competition. But it’s not like that hasn’t been the case since the James Franklin era. Over their last 13 SEC games, Vanderbilt is 1-12 with a loss margin of 26 points. Yeah, yesterday it was a little more than that, but let’s not act like embarrassing SEC losses are a new phenomenon at Vanderbilt.

Lea is playing the long game and to leave this season with any optimism, Vanderbilt fans will have to play along. Effort, time and money are slowly being thrown into this program regardless of 2021 boxscores. The football staff is larger than it has ever been, the Vandy United campaign is underway and Lea’s first recruiting class is shaping up quite nicely.

There will be plenty of SEC losses to come this season—likely next season as well. They may not be as embarrassing as this one, but they are inevitable with the current state of Vanderbilt’s roster. While hard to see in the rage of a pathetic loss, broader positives do exist regardless of whether we saw them on the field this weekend.

“This is just a point in the progression line. It doesn’t shake us because we understand it doesn’t define us. This is a delicate ecosystem, we are young, we are in the infancy of our program,” Lea said calmly. “This is the long hard way.”

The Vanderbilt Hustler welcomes and encourages readers to engage with content and express opinions through the comment sections on our website and social media platforms. The Hustler reserves the right to remove comments that contain vulgarity, hate speech, personal attacks or that appear to be spam, commercial promotion or impersonation. The comment sections are moderated by our Editor-in-Chief, Rachael Perrotta, and our Social Media Director, Chloe Postlewaite. You can reach them at [email protected] and [email protected]
All The Vanderbilt Hustler picks Reader picks Sort: Newest
Subscribe
Login
2 Comments
Newest
Oldest Most Voted
Inline Feedbacks
View all comments
D
Daniel

DiNardo’s parting gift. I was there, too – well, the first half of it.
I didn’t watch this week’s game, but I’m not sure I’ve ever seen an uglier Vandy box score.
I’m still hopeful for Coach Lea, but his unconventional (and emotionless) style have a way to go to prove themselves.