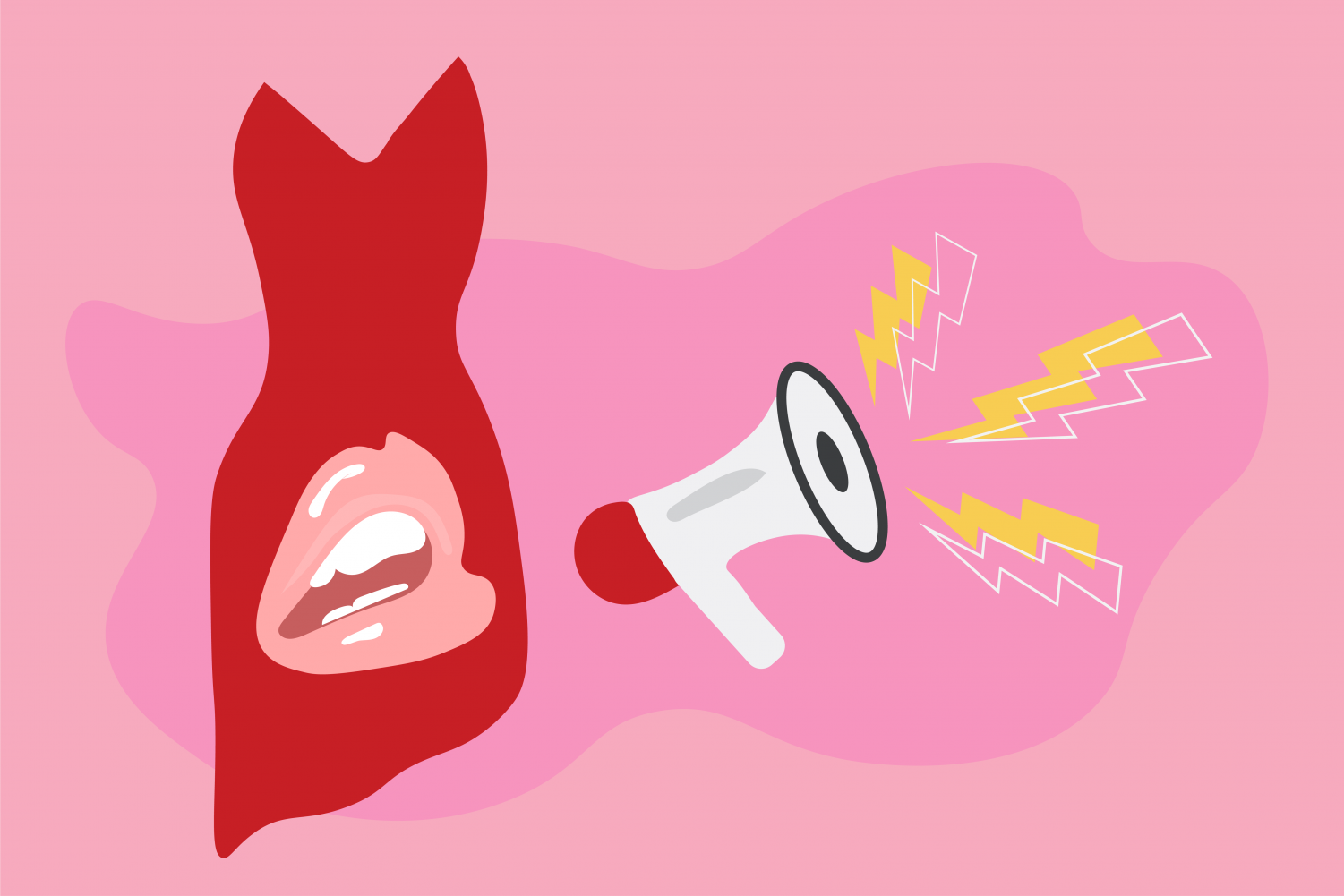 Alexandria Ocasio-Cortez’s “TAX THE RICH” dress made an overt statement at the Met Gala, an evening about fashion and messaging. Multimedia/Emery Little) (Emery Little)

Alexandria Ocasio-Cortez’s “TAX THE RICH” dress made an overt statement at the Met Gala, an evening about fashion and messaging. Multimedia/Emery Little)

FELLAS: Let fashion speak for itself

By now, you’ve definitely seen Congresswoman Alexandria Ocasio-Cortez’s dress from the 2021 Met Gala themed In America: A Lexicon of Fashion. The dress was white with a classic silhouette and had the phrase “TAX THE RICH” written on the back in red text. It garnered support from some liberals. But those farther left on the political spectrum criticized its performativity–even comparing it to Mark Fisher’s concept of Capitalist Realism, in which anti-capitalist protest is commodified. But I’m not here to critique her message. Instead, I would like to talk about the efficacy of her communication style.

Why, you might ask, am I qualified to critique fashion? Well, I’ll have you know that I’ve seen every single episode of Project Runway, twice, and I went to a meet-and-greet to take a picture with former Parsons professor and reality television personality, Tim Gunn.

One of the most meaningful ways to offer political and social commentary is through the garments we wear. The most impactful political fashion statements are those that are legible without words. They rely on cultural symbols, employing or subverting them to convey a message that takes a little bit of thought to understand and begs the audience to engage.

Psst, AOC, just because the theme has the word lexicon in it, doesn’t mean you need to literally spell it out for us. And by the way, have you ever heard the phrase a picture’s worth a thousand words?

As soon as it emerged as more than pure protection from the elements, clothing became communicative: of class, of gender, of various forms of distinction and identity. From the colors we wear to the emblems we bear, we can tailor our appearance to convey beliefs. One of the most famous Supreme Court cases ever—Tinker V. Des Moines—centered around the rights of students to wear black armbands at school to protest the Vietnam war. The court ruled in favor of the students, citing the first amendment’s rights to free speech and expression. Even the SCOTUS, who wear the same monochromatic robes every day, recognize fashion’s political power. Just look around our campus and you’ll see students wearing messages that are important to them, like Dores Divest’s orange beanies, or t-shirts that make statements on different identities.

Communicating through fashion on the red carpet has been done effectively before. For example, actor Billy Porter wore a “tuxedo dress” to the 2019 Oscars to challenge traditional conceptions of masculinity.

“My goal is to be a walking piece of political art every time I show up. To challenge expectations. What is masculinity? What does that mean?” Porter said.

But Porter didn’t need to explain this goal. One look at the tuxedo dress made it clear that he was posing questions about gender expression. Alternatively, Porter could have worn a traditional tuxedo and written on it in text, “What is masculinity?” But that would have been less potent—too obvious and too explicit. Instead, he trusted his audience to understand the cultural norms and symbols he was distorting to create a more thought-provoking piece of “political art.”

Similarly, Beyonce’s 2016 Super Bowl halftime show featured references to The Black Panthers with dancers donning black berets and clad in leather. Beyonce let their outfits speak for themselves. She could have had text that said “I’m referencing Malcolm X and the Black Panther Party.” But she is an artist and understands that art requires some subtlety. She trusted her audience to get her references and trusted those who didn’t initially understand to do their own research on the Black Panthers. Part of Beyonce’s appeal as an artist is her choice not to spoon-feed her audience. She understood that art is at its core, about interpretation.

Politicized fashion is not a new invention, suddenly emerging from our culture’s continued blurring of the lines between politics and pop culture. Far from it. For example, Queen Elizabeth I, also known as the virgin queen, regularly wore white and was known for her painted-white face, which symbolized chastity and purity. I suppose she could have just had a ladies maid embroider a red letter V, for virgin, onto all of her dresses, but Elizabeth had deft political skills that included communicating power symbolically, thus allowing it to permeate culture in unspoken ways. In the twentieth century, white was adopted by the suffragettes who wanted to communicate that if given the vote, they would use it to advance morality and purity. “Suffragette White” continues to be worn today by female politicians, including AOC.

When AOC was sworn into Congress she wore white: “I wore all-white today to honor the women who paved the path before me, and for all the women yet to come. From suffragettes to Shirley Chisholm, I wouldn’t be here if it wasn’t for the mothers of the movement.” In 2019, AOC understood that fashion could communicate political messages in subtle ways.

The Met Gala, which has been criticized by many for its hunger-games-like expression of the extreme wealth of late-stage capitalism, is at its core about fashion. It is a benefit to raise money for the Costume Institute at the Metropolitan Museum of Art. Slogans on t-shirts have their place at protests in the streets, where the aim is to be visible, accessible and clear. However, at an event where your clothes are supposed to put form over function, just slapping a slogan onto a gown is lazy.

If your message could be conveyed in the exact same way by scrawling it onto a piece of poster board, then it’s not fashion; rather, it’s a wasted opportunity for something more interpretive, provocative and complex.

At this year’s gala, attendees managed to craft political messages that reflected the artistic theme and setting of the Met Gala. Indigenous model, Quannah Chasinghorse, for example, has been dubbed the breakout star of the gala, wore traditional Navajo turquoise jewelry. While not explicitly political, Chasinghorse made the important statement that “In American” needs to include Indigenous people and aesthetics.

Similarly, Gemma Chan paid homage to Anna May Wong, the first Chinese-American film star of the Hollywood Golden Era, in a black dress with a silver dragon on it, similar to one that Wong wore. Wong was vocal about being marginalized in the industry and especially given the rise in anti-Asian sentiments and hate crimes in the past year. Chan’s dress was powerful and appropriately conveyed her message.

AOC is not the only person to misunderstand the atmosphere of the Met Gala. Actress and model Cara Delivigne opted for a shirt with “PEG THE PATRIARCHY ” at the center and Congresswoman Carolyn Maloney wore a dress reading “ERA YES.” While some may argue that fashion is insignificant and pop culture does not have an impact beyond “who wore what” and red-carpet drama, pop culture and art can be vital to understanding our values. How we spend our time is meaningful. What we choose to interact with shapes our worldview. What we consume is important. I don’t know about you, but I spent at least eight hours dissecting my favorite and least favorite looks and messages with my other fashion-minded friends. Politicians, artists and historians have always understood the importance of fashion in capturing social mores, as well as reflecting conflicts, anxieties and power struggles.

What AOC and the other wordsmiths illustrated is that they don’t believe in their constituents’ capacity to understand more abstract symbols and that they don’t have faith in art’s power to communicate effectively. They should have let fashion speak for itself and trusted their audiences’ cultural literacy, instead of literalizing the language of fashion.

The Vanderbilt Hustler welcomes and encourages readers to engage with content and express opinions through the comment sections on our website and social media platforms. The Hustler reserves the right to remove comments that contain vulgarity, hate speech, personal attacks or that appear to be spam, commercial promotion or impersonation. The comment sections are moderated by our Editor-in-Chief, Rachael Perrotta, and our Social Media Director, Chloe Postlewaite. You can reach them at [email protected] and [email protected]
All The Vanderbilt Hustler picks Reader picks Sort: Newest
Subscribe
Login
2 Comments
Newest
Oldest Most Voted
Inline Feedbacks
View all comments
V
VU Alumnus

The designer of AOC’s dress feels no need to pay her own taxes and rent. Also, why were the celebrities except from wearing masks to the Met Gala while the vaccinated staff had to remain masked? The rules are for thee and not for me as the saying goes.
https://www.yahoo.com/now/designer-aocs-tax-rich-dress-180100451.html

“Designer Aurora James’s company, Brother Vellies, racked up three open tax warrants in New York for failing to withhold nearly $15,000 worth of income taxes from employees’ paychecks, the New York Post reported.”
“The company has been hit with 15 warrants in total since 2015. Additionally, the Internal Revenue Serviceplaced six federal liens on the company from April 2018 to April 2019, totaling $103,220, specifically citing the company’s failure to remit employee payroll taxes.”
“A previous landlord sued James in February 2018 for more than $5,000 in unpaid rent at her shop’s old address in Manhattan. Another landlord in Aug. 2020 filed papers to evict Brother Vellies from its location in Brooklyn and demanded more than $25,000 plus interest for staying beyond the end of the lease, with the case eventually getting settled, according to the outlet.”

https://www.spectator.co.uk/article/america-s-covid-rules-are-for-serfs-not-celebrities
“Amid the ridiculous outfits at the Met Gala last night, between the faux-socialist in her absurd ‘Tax the Rich’ dress and whatever that was that Kim Kardashian was attempting, stood a row of servants, masked. The celebrities, of course, were not. If there’s one thing we have collectively learnt during the 18 months of this pandemic is that the rules don’t apply to the rich and famous.”
“Because the politicians and celebrities of the night are denizens of the American left, excuses for their behaviour were swiftly made. But none of the passes given to the elite apply to us plebs.”
“No one has done more to codify a different tier for the elites than Mayor Bill de Blasio. In his city, only 37 per cent of black people and less than half of Hispanics have been vaccinated.”
“Anyone doing any business indoors in New York City must be vaccinated. 63 per cent of black people and 51 per cent of Hispanics will be left out. So much for diversity and inclusion.”
“The only exemptions in de Blasio’s Executive Order were given to people who matter. Performers, athletes and, of course, their entourages do not need to show evidence of vaccination to work indoors in New York City. The rules are not made for them.”

The San Francisco mayor doesn’t need to wear a mask. She was in violation of her own indoor mask mandate at a recent concert. However, because she was “feeling the spirit” and is a Democrat she is exempt from scrutiny. Illegal immigrants don’t need to wear masks or prove vaccination status to enter our country but I have to show my papers to enter a restaurant in some cities. Makes perfect sense.
Meanwhile, Vanderbilt is making parents (even if they are vaccinated) wear masks at indoor outside events – ridiculous!!! Don’t call me about a donation this year.
https://www.vanderbilt.edu/families/familyweekend/
“Therefore all Family Weekend visitors—whether vaccinated or unvaccinated—will be required to mask, even while outdoors, during any Vanderbilt-sponsored on-campus or off-campus event.”