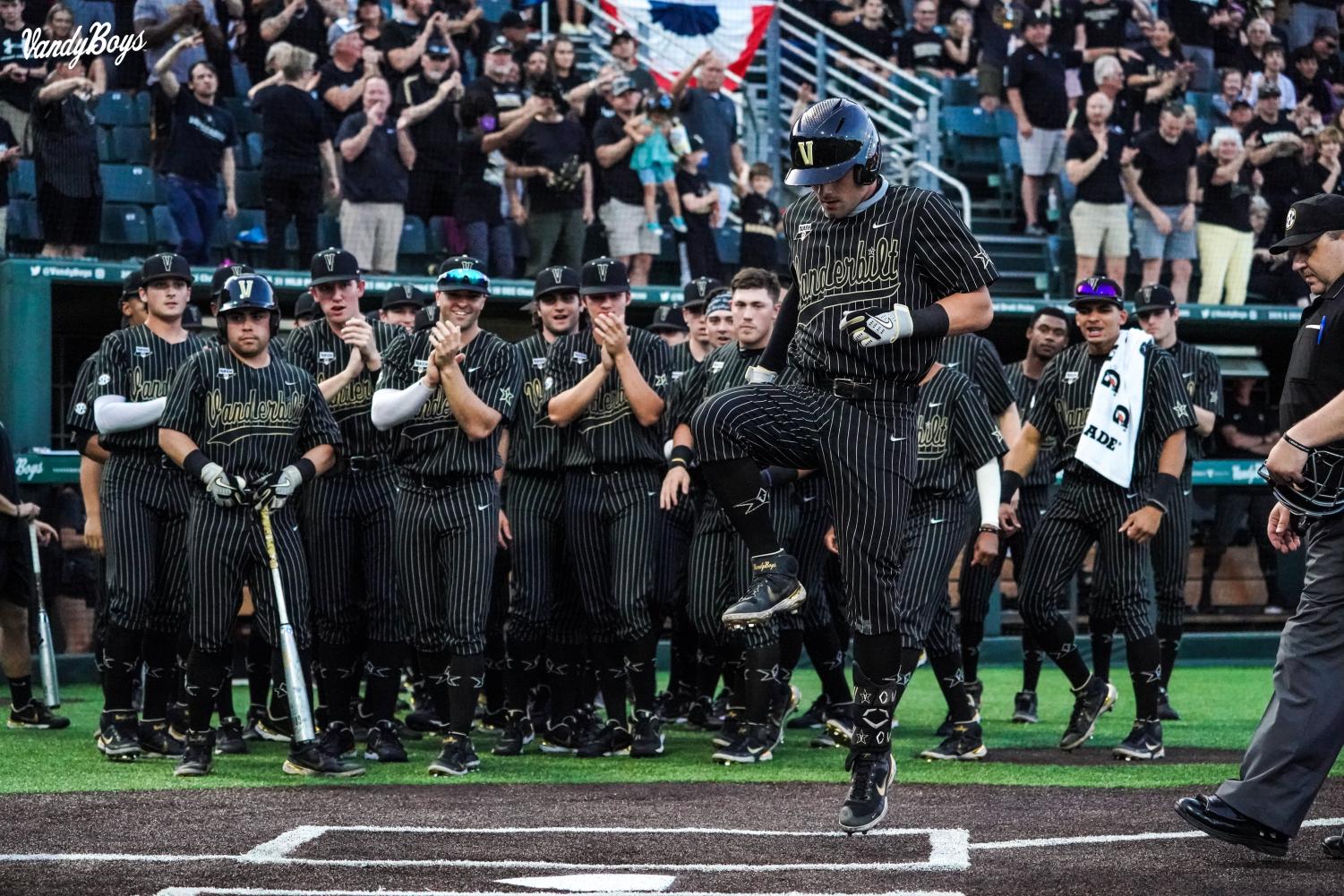 How advanced analytics are fueling the VandyBoys behind the scenes

The Commodores remain one of the country’s premier programs thanks to their work both on and off the diamond.

Growing up, Mark Weinstein (‘20) loved baseball and analytics. As a student at Vanderbilt, he combined these two passions to help the school’s baseball program pioneer the use of advanced analytics and tracking technology at the collegiate level.

A computer science and mathematics major who knew he wanted a career in baseball analytics, Weinstein offered his services to the Vanderbilt baseball team in 2016, his first year on campus.

While this opportunity never came to fruition, Weinstein worked to improve his skills. After his freshman and sophomore years, he spent his summers interning at a data science company and with the Washington Nationals’ research and development department, respectively.

With this experience, Weinstein once again tried to assist the team his junior year, as he emailed Brooks Webb, the program’s current general manager and chief of staff. This time, Weinstein’s offer was accepted and he worked with the team throughout the season.

“Data is becoming an incredibly important part of the game,” Weinstein, a baseball research analyst for the Cincinnati Reds, says. “And Vanderbilt knows that.”

After the program won its second national championship in 2019 with just Weinstein and one other alumnus focusing on research and data, Weinstein saw an opportunity for expansion. He knew of other schools that had analytics programs for their baseball teams and he wanted to establish something similar on West End.

Weinstein discussed his idea with members of Vanderbilt baseball’s staff; they all understood that they could establish a strong collaboration between an eager and smart student body and a team with data to offer. And thus, the unofficial Vanderbilt baseball analytics club was born.

In the fall semester of 2019, the club grew to approximately 12 students with Weinstein serving as the de-facto director. Weinstein tried to find a balance between informality and seriousness for the unofficial student organization.

“After we ‘hired’ the group, I was just kind of experimenting. I’d never, all of a sudden, had like 12 people to manage. It was just an experiment of what’s the best way to teach and communicate,” Weinstein says. “A big thing we did, and continue to do, is save coaches time, save people time, so that they can do what they excel at.”

With access to all of the data they need, the club focuses on automating it and making the results easier to understand. In weekly meetings, club members both come up with original ideas and take on requested projects, handling different sets of data that include every player and position group.

Since no club member officially works for the program, there has to be someone to connect them to the team, and that is where Brandon Barak comes in.

Bridging the gap: From computers to the field

Since 2018, Barak has served as the VandyBoys’ director of player development, working behind the scenes to improve the team.

“I spend a lot of time combing over information that we collect on individuals,” Barak says. “I dive into the wormhole, because [the coaches] are player-facing. And me, I’m more in the background sitting in my office going over all the numerical stuff.”

In the summer, fall and winter, Barak focuses on players’ individual improvement and development. During the season, he oversees opponent scouting alongside Josh Ruchotzke, the team’s video coordinator.

Barak says that when he arrived to work for the team in 2015, the use of analytics and advanced tracking technology was in its early stages but that it has accelerated in recent years.

“Every year we’ve added layer to layer to it, and then when Coach Baxter and Coach Macias joined the staff in 2018 that’s when we really ramped it up,” Barak says. “We’ve added a bunch of different technologies since I’ve gotten here six years ago.”

According to reliever Hugh Fisher, the players have also experienced this evolution.

“From freshman year to now, I think understanding it has been the biggest change because we understand every number now,” the senior pitcher says.

As baseball has turned the use of data and technology into an arms race at every level, Vanderbilt is at the cutting edge.

“Technology-wise, we’re in the top, top tier in terms of what we have access to, what data we’re getting, top-tier in the NCAA for sure. Honestly, we’re pretty similar to a lot of MLB teams,” Weinstein says. “[The program is] constantly adding new technology, whether it’s virtual reality stuff, or just adding things to the biomechanical lab, where we’re just getting such detailed data on a pitcher’s motion.”

The club helps maximize the use of these valuable machines by transforming the complex numbers they capture into datasets that are read by both coaches and players.

“Without people to harness and leverage [the data], you’re not getting the biggest value of your investment and you’re not putting out the best product as a baseball team,” Weinstein says.

This is where Barak bridges the gap between the club that harvests the data and the coaches and players who use it.

“On a big-picture level, I’m handling the day-to-day stuff and getting that to the players,” Barak says. “If there’s a specific issue, then I’ll research a topic and then talk it over with Baxter or Brown, or whoever it is that’s working with the player, and then give them whatever they need to help that player and whatever they’re working on.”

Weinstein speaks glowingly of Barak. They worked closely as most requests for analytics were made to the club through Barak.

“[Barak’s] curiosity and his ability to push the group and interpret the questions of the coaches and fill us in on how they think and what they want is essential,” Weinstein says.

Barak cites Driveline’s TRAQ software as a development hub for the roster. The software allows coaches and players to individually view game reports, training data and even weight room statistics. This enables players and coaches to set benchmarks and track progress throughout the season and players’ careers.

The program also boasts TrackMan machines, including one that quantifies projectile motions pitch to pitch and another one that specifically tracks defense and hitting. They also own high-frame motion cameras from Rapsodo that measure pitchers and hitters, along with Ground Force products, which assess whether players are properly using their legs and lower bodies.

With all this access to—and emphasis on—data, the players are well aware of their numbers.

“[Coach Brown] gives us postgame reports every time you throw in a game,” Fisher says. “You get live feedback within a few hours, get your film, along with numbers, and the whole analytical side of things. Everyone’s pretty aware. Everyone’s interested in that too.”

Barak, along with the coaches and even Weinstein, perfectly understand what analytics and the extensive tracking and research are used for in the program: reinforcement.

“Something I learned in professional baseball before I came here is that the best organizations are the same top to bottom,” Barak says. “Whether you’re in the major leagues or you’re in A-ball, you’re getting the same consistent messaging and then all the [data] that is being collected and shown to you. All of that is reinforcing those concepts [coaches talk about], so that’s really a mentality that we tried to put in here from that.”

Both Weinstein and Barak credit the coaching staff for being open-minded and willing to learn about analytics.

“The coaching staff is incredibly smart, incredibly hungry for information, and incredibly ‘in the know’,” Weinstein says.

Coach Corbin believes that the advancement in data and tracking technology has been hugely beneficial to the program.

“There’s some reinforcement to what [we’ve] seen based on the information that we get, whether it’s high-speed video or the numbers and it kind of validates what you see,” Corbin says.

The two-time national championship winner does acknowledge that the staff avoids bogging down the players and causing them to lose focus when playing.

“It’s helped us in the training environment, but we try to stay within the white lines of being able to compete against the game itself,” Corbin says.

As analytics and technology continue to advance, the program plans on maintaining their position at the top of the industry. Barak believes defensive tracking is the area of the game that is lagging the most in the baseball world. The team has their own system—called “plus-minus defensive plays”—to measure the defensive plays that are usually not quantified and Barak hopes to continue augmenting their tracking.

The Commodores are currently the third-ranked team in the country with a 38-12 record. They are the defending national champions and arguably the best program in the nation. This is a result of the VandyBoys’ persistent efforts to be the best in every aspect of the sport on and off the field.

While the analytics continue to be computed away from the diamond, they are certainly benefiting the players and coaches while also driving the program forward into the future.

“That human element of like, ‘Wow, I just helped someone not waste their time and spend 15 hours putting together all these random visual different cells and it takes them forever’,” Weinstein says. “That always made me feel really good.”