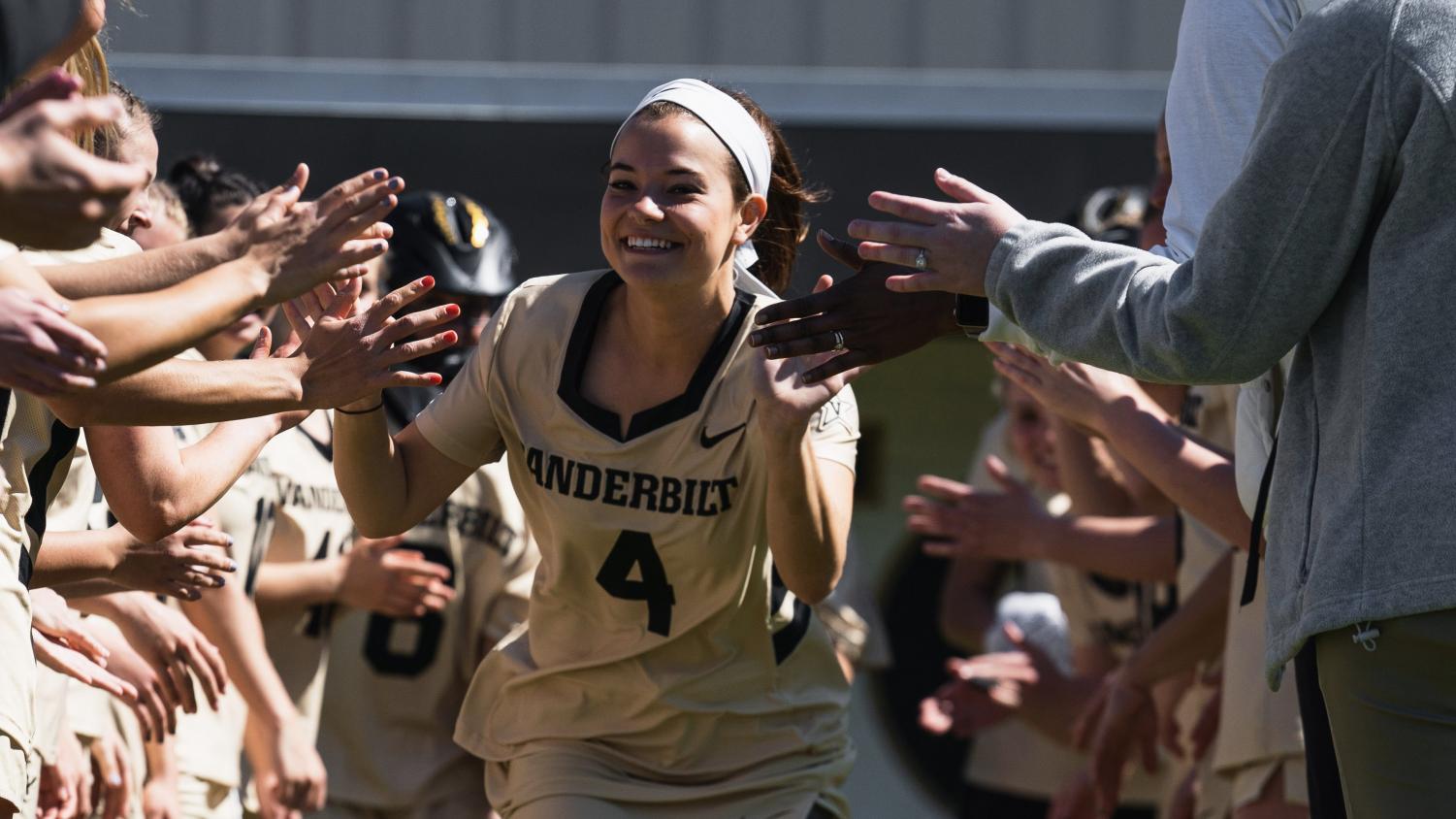 Senior attacker Griffin Gearhardt, whose father was also her high school coach, lives up to Mr. Gearhardt’s legacy as “another coach on the field.”

“Griffin is by far the leader we want speaking on the field.”

“She’s really good at keeping things positive,” Coach Hewitt says. “Things get super intense on an athletic field, and sometimes too intense for our teammates, and I think Griffin does a really good job of just getting everybody to be level-headed.”

Gearhardt has been a key piece to Vanderbilt’s locker room since she came to West End in fall of 2017. The Memphis, Tennessee native is familiar with the pressure of being a leader. In Memphis, Gearheardt, a high school lacrosse star, was dedicated to growing the sport and encouraging more locals to pursue lacrosse.

“[Lacrosse] wasn’t big throughout the entire South,” Gearhardt says. “I think my dedication to growing the sport, growing my skills from a young age, with my father, with my family, my older sister, and cousin [started then]; I was dedicated from the start to push myself.”

She is also familiar with success, as she was named a four-time All-State and four-time All-American player. At Gearhardt’s alma mater, the Hutchinson School, Griffin became the all-time assist leader with 317 and points leader with 645.. In addition, in the summers between seasons, she played for one of the premier high school lacrosse club teams, the Maryland-based Skywalkers Lacrosse.

Gearhardt’s personal accolades are commendable, but her four state championships make her most proud. She prioritizes the success of her team over individual accomplishments.

This mentality was essential to Gearhardt at Vanderbilt, as she quickly bought into Coach Hewitt’s team-first environment. Gearhardt’s extraordinary lacrosse knowledge makes her a selfless field general who guides the Commodores to success. Coach Hewitt alluded to a team meeting after the only two losses of the season thus far, coming at the heels of No. 2 Notre Dame (score: 5–19) and No. 1 North Carolina (score: 6–17).

“She was one of the first people that spoke in our team meeting when we were trying to get a handle in what direction we needed to go,” Coach Hewitt said. “She is just the ultimate teammate… I think you’re seeing her seize her moment right now.”

Gearhardt did in fact seize the moment, having logged five points in the Commodores’ 14–12 victory over East Carolina on Mar. 28. It’s been a long time coming: despite playing only 12 of 16 games in the 2018–2019 season as a sophomore, she finished fifth on the team in assists (9). Although the coronavirus pandemic prompted the cancellation of her junior season, Gearhardt still made the most of the shortened season and showcased the special teammate she is.

“As seniors, we just felt a little bit, not nervous, but weird,” she says, reflecting on being a student-athlete in a pandemic. “It’s definitely been a little tough and made us initiate a little more charge and try to get control over what we do have [control over].”

The coronavirus pandemic may have created some uncertainty for the Commodores, but it also provided Gearhardt with an opportunity to again demonstrate her leadership. During this time of disarray and uncertainty, her positivity and humility helped keep the team united.

“For me, I knew that when she got here as a freshman that she understood the game,” Coach Hewitt says. “[Gearhardt] understood what we were talking about, and now, it’s like you just have another coach on the field.”

Much of Gearhardt’s lacrosse foundation, leadership and success can be credited to the man who began teaching her the game from a young age: her father.

“From the time she was little, in the fourth grade, we always focused on the fundamentals of the sport, building your skills as such,” David Gearhardt says. “It’s especially tough in Tennessee, where there’s not a lot of lacrosse, so you really have to focus on your own skills because you’re kind of learning from scratch, and that’s something we always focused on.”

David Gearhardt was in the unique position of being not only Griffin’s father but also her high school lacrosse coach. Now, sitting from home, Gearhardt watches his daughter continue her success through the skills and values he instilled when raising her.

“We’ve just been so thrilled with Vanderbilt. She’s got great teammates, great coaching staff,” Griffin’s father says. “They’re coached, but at the same time, the girls have their own personalities… She’s always been a leader, but it was watching her do the same thing as she’s gotten older through Vanderbilt [that] has been really fun to watch.”

This fun extends to her post-graduation plans: US Lacrosse Regional Direction Lou Corsetti and Griffin Gearhardt have been working together to possibly start her career with US Lacrosse in a high school mentorship capacity, according to Griffin’s father. And David, a high school coach himself, can’t wait to see it.

“I’d love to think one day, we would be able to sideline coach as a volunteer,” he said. “She’s been teaching private lessons probably since she was 14 to younger girls and still does that at home; she even does it in Nashville.”

Griffin Gearhardt will continue what’s made her a household name with Commodore lacrosse fans: scoring goals and positioning her team for victory. Her team-first spirit will be at the forefront come May in the AAC Tournament. After that, she could be eyeing a homecoming to Baltimore, where her Skywalkers Lacrosse club played a mere few miles away from Johnny Unitas Stadium—the site where the Division I Women’s Lacrosse Championships will come to a close.

The Vanderbilt Hustler welcomes and encourages readers to engage with content and express opinions through the comment sections on our website and social media platforms. The Hustler reserves the right to remove comments that contain vulgarity, hate speech, personal attacks or that appear to be spam, commercial promotion or impersonation. The comment sections are moderated by our Editor-in-Chief, Rachael Perrotta, and our Social Media Director, Chloe Postlewaite. You can reach them at [email protected] and [email protected]
All The Vanderbilt Hustler picks Reader picks Sort: Newest
Subscribe
Login
1 Comment
Newest
Oldest Most Voted
Inline Feedbacks
View all comments
T
Tom Whitman

Griffin is a beautiful person and a great competitor. I have had the privilege of following her career since she started playing for the Hutchinson School. She is dynamic!