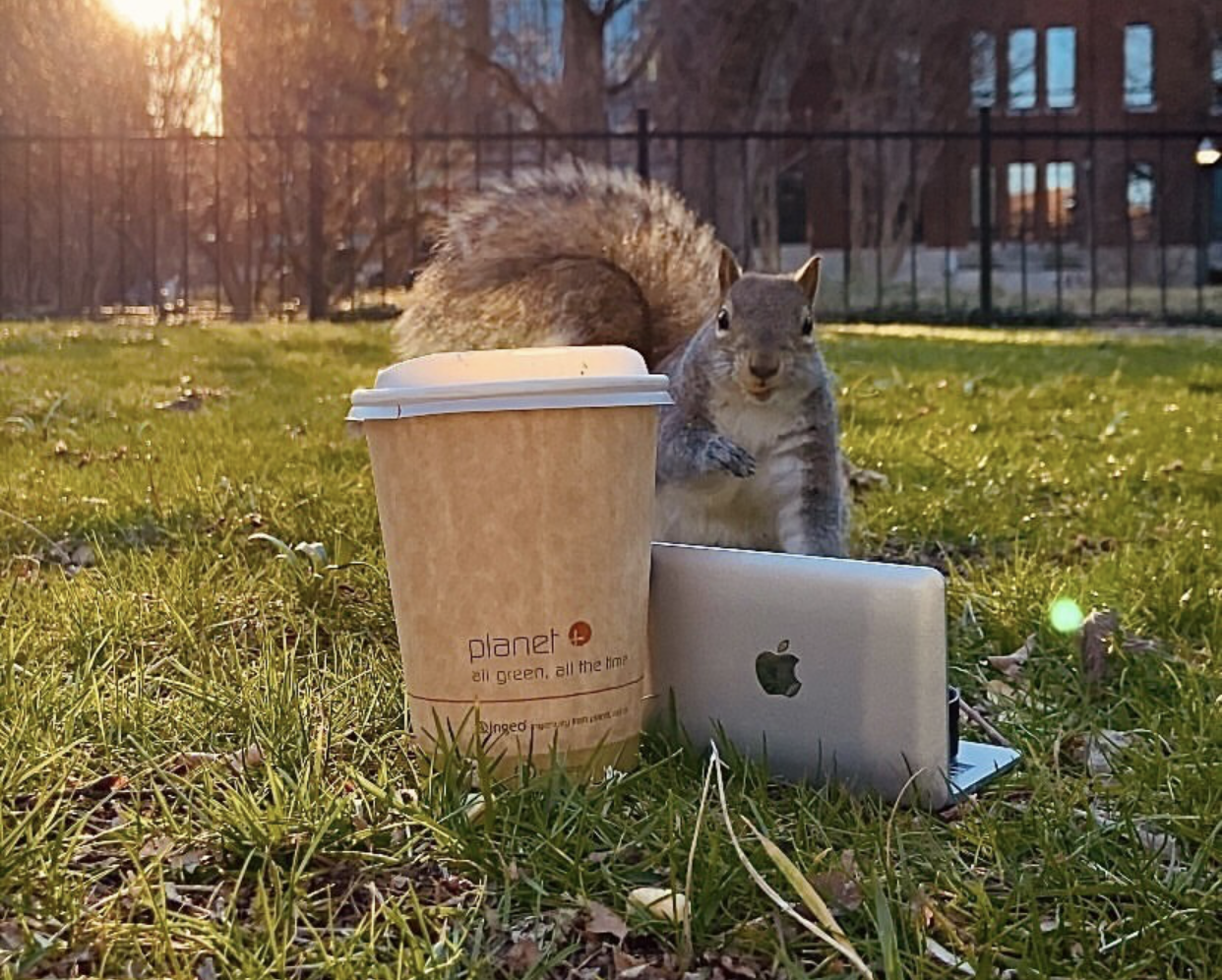 Sophomore Garfield Zhang, the campus “squirrel whisperer,” tells us all about his extraordinary relationship with Vanderbilt’s wildlife that has developed since COVID-19 lockdowns and distancing policies began.

Shanghai born and Singapore bred, sophomore Garfield Zhang arrived in Nashville never having seen a squirrel in the wild before. But today, Zhang has been dubbed the Vanderbilt “squirrel whisperer.” You can find him practically every day on Library Lawn surrounded by a microcosmic zoo of squirrels, birds, chipmunks and his own pet guinea pig. With that being said, Zhang assured us that becoming the squirrel whisperer was not a simple process.

“In my freshman year, the squirrels I saw were almost invisible to me, and I did not pay any attention to them at all. But since

COVID-19, there has been so much less human interaction, which has made me spend more time alone,” Zhang said. “I signed up for as many Anchor Link activities as possible, which was where I met the first squirrels.”

For Zhang, alone time during the pandemic meant seeking out new outlets for interaction and different activities. It was at a fall pumpkin-decorating event where Zhang met his first squirrel, nicknamed Vandy, who later followed him home. Zhang would also later meet a chipmunk at a Vanderbilt-organized painting activity.

“From these moments, I started to love the squirrels and chipmunks. It is very peaceful to have animals with me when I am doing boring stuff,” Zhang said. “Over Christmas break in Nashville, when I had nothing to do and no one to meet, I would come and sit with the animals for hours.”

Now, Zhang sits on Library Lawn nearly every day, where he does his homework and takes his classes. During his time outside, he feeds the squirrels their favorite snacks and takes photos, if he has the chance. According to Zhang, unsalted walnuts are the squirrels’ favorite treat, but most nuts will do the trick. Chipmunks and birds also make frequent appearances for these lawn hors d’oeuvres.

“I have named a bunch of animals and I try to relate the names to where they live and what they are like. Since I named them and noticed differences in their appearance and personality, I can now easily tell who is who,” Zhang said. “I know that they remember me as well, since some squirrels will follow me or come and sit with me almost every day.”

For example, Zhang named Vandy and Valentine similarly (names with the letter “V”) because they live together on the same tree. Steve and Steven were named in reference to Stevenson Library, the building that is closest to their tree. Even politics seems to play a role in the naming process sometimes.

“I named a squirrel ‘Hillary,’ first because she is hilarious, but also because she was the first squirrel to stand up and is very brave and bold, like Hillary Clinton,” he said.

Additionally, a couple of birds in Zhang’s posse, Mitchy (a male, red cardinal) and Nancy (a female, pale-brown cardinal), are named after the iconic political rivals Mitch McConnell and Nancy Pelosi. Zhang takes pride in his creativity when distinguishing between the animals he comes across.

Zhang’s relationships with these animals even inspired him to get a pet guinea pig, which he named Pork, since he wanted to live with an animal similar to his squirrel pals. He said that Pork and the squirrels are very curious about each other, which he attributes to Pork’s small size relative to the squirrels. Sometimes the squirrels overstep and take after Pork, and Zhang finds them in his apartment.

“I have no idea how they come into my room. I live on the tenth floor of an off-campus apartment building, and they still find a

way to get into my room when I leave the window open,” Zhang said. “Hillary will even sometimes take my guinea pig’s bed and sleep there instead of in a tree. I always have to remove her from my apartment when this happens, but it is still very funny.”

Zhang’s story is just one instance of the unexpected friendships brought about by COVID-19. The pandemic isolated us all in some way or another, and it’s heartwarming to think that in a time when human interaction was scaled down to its lowest levels, people like Zhang could still find solace in the natural world around them.

The Vanderbilt Hustler welcomes and encourages readers to engage with content and express opinions through the comment sections on our website and social media platforms. The Hustler reserves the right to remove comments that contain vulgarity, hate speech, personal attacks or that appear to be spam, commercial promotion or impersonation. The comment sections are moderated by our Editor-in-Chief, Rachael Perrotta, and our Social Media Director, Chloe Postlewaite. You can reach them at [email protected] and [email protected]
All The Vanderbilt Hustler picks Reader picks Sort: Newest
Subscribe
Login
7 Comments
Newest
Oldest Most Voted
Inline Feedbacks
View all comments
A
Anonymous

What a guy! To earn animals’ trust like this is not to be taken lightly. Thanks for the uplifting story!

very good article thanks for sharing

Love this! Such a heartwarming and tender friendship. This article made my day!

6
Reply
A
A Squirrel Fan

This was so heartwarming! I love this so much

this is the cutest story

One of the best stories of the year in the Hustler! Everybody will read this one. I’m glad Garfield Zhang is a Vandy student.