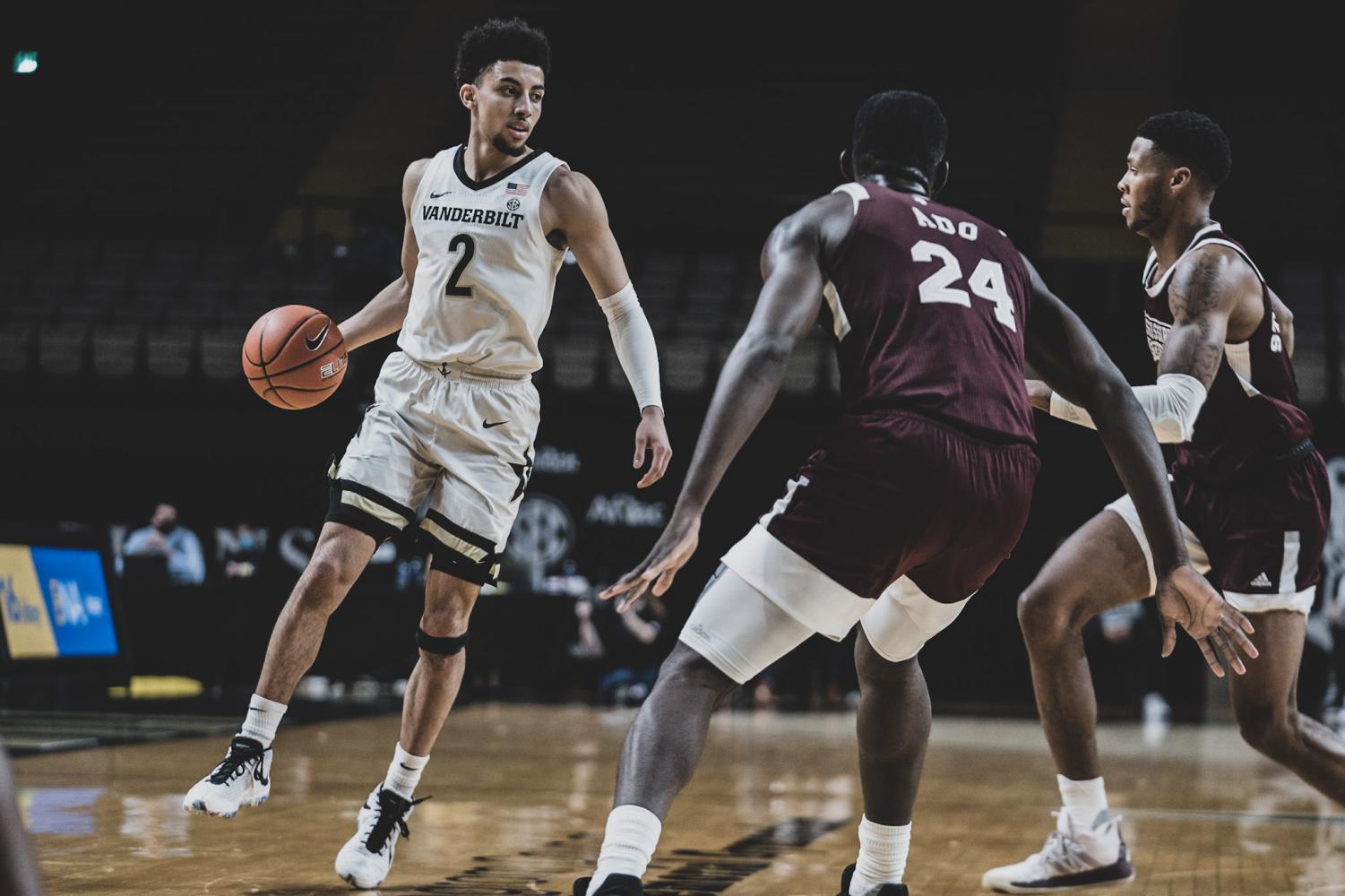 The Vanderbilt Commodores have been down 20 or more points in each of their last three games, but a hard-fought comeback attempt against the Florida Gators provides a glimmer of hope for the rest of the season.

It’s been an eventful couple of weeks for Vanderbilt men’s basketball, to say the least.

The Commodores had four games scheduled but only three were played, as per the norm during COVID-19. The Commodores found themselves down by at least 20 points in each of their match-ups against Tennessee, Arkansas and Florida. The first two games ended with losses by margins of 20 and 21, respectively.

And then the program found itself in the spotlight of the national media after head coach Jerry Stackhouse made headlines for calling out his squad over their lack of effort after the Arkansas loss.

For the majority of this two-week span, there was very little to feel good about for the Commodores. They got severely out-played on both sides of the ball and, perhaps most notably, they were out-worked and out-hustled.

But the final ten minutes against Florida offered a tiny glimpse of hope for the rest of the season. With 9:52 remaining in the game, the Gators pulled ahead 57-35 and appeared to be clicking on all cylinders. Vanderbilt could have mailed it in at that point, but the team showed some heart and clawed their way back to make it a four-point game with 37 seconds remaining.

And with a very winnable game against South Carolina coming up on Saturday, maybe that momentum will carry over as Vanderbilt still searches for its first conference win of the season.

Vanderbilt’s biggest issues currently lie on the defensive side of the ball. Opponents are feasting on the Commodores lack of speed on the perimeter and lack of physicality inside. Throughout the last three games, Vanderbilt has surrendered totals of 81, 92 and 78 points. You’re just not going to win many SEC games giving up that many points.

Even more staggering, however, is the field goal percentage of Vanderbilt’s recent opponents. Tennessee shot 49 percent from the field. The Razorbacks hit on a blistering 57 percent of their attempts. The Gators shot 52 percent.

High opposing field goal percentages has been a major concern for Stackhouse and that continued after Wednesday’s close loss at Florida.

“It’s going to be hard to beat teams, unless you’re really shooting it at a good clip, when they shoot better than 50 percent,” Stackhouse said. “My magic number is around 42, 43 [percent]. We’ve been a ways from that, so I think that’s going to be the real telling sign of when our defense starts to play at the level I think it’s capable of.”

Some of this can be chalked up to players hitting tough shots against the Commodores, but a lot is a direct result of lapses on Vanderbilt’s part. Frankly, Vanderbilt is just making it too easy for teams to get high-quality shots without having to do anything too difficult offensively.

As outlined in a previous piece by The Hustler, it starts with the perimeter defenders who have not been able to consistently stay in front of the opposing guards. Vanderbilt then is over-helping in the paint to stop the dribble penetration, leaving shooters open on the wing. The ball handler kicks it out and the Commodores are left in scramble mode trying to help the helper. A few passes later and opponents typically get an open, high-percentage shot.

This trend is reflected in opponents’ assist numbers as well. Each of the last three teams the Commodores have faced have recorded at least 16 assists—with the Razorbacks registering 22. To put this in some context, Georgia leads the SEC in assists per game with 15.6. Vanderbilt’s propensity to overhelp and not recover fast enough to the perimeter allows teams to only need to swing the ball around a few times in order to get a good shot off rather than making teams make tough isolation plays.

The other part of Vanderbilt’s struggles simply comes down to effort. And Stackhouse did not hold back on that front after the blowout loss to Arkansas.

And it appears as though Stackhouse got his message across. Although they came up short in multiple facets against the Gators, effort wasn’t one of them. Vanderbilt battled hard all night and even outrebounded Florida 35-29. Every other SEC team will most likely have more talent than the Commodores, so it is imperative that Vanderbilt doesn’t lose the hustle battle as well.

Running an NBA-style offense, the Commodores have based a majority of their scoring on the three pointers. And early into conference play, that strategy was working perfectly as Vanderbilt shot 41 percent from deep through its first three SEC games. In the next couple of match-ups, however, it was a completely different story.

The Commodores made just five threes in Knoxville and shot a measly 22 percent from long range. It wasn’t much better against the Razorbacks as Vanderbilt shot 6-22 from deep.

Part of this deficiency has to do with the recent struggles of freshmen Myles Stute and Trey Thomas—both of whom got off to blistering starts. The duo shot a combined 17-33 from three in the first three SEC games but are just 2-18 since then.

It is not unusual for freshmen to be up-and-down throughout their first season, so there is still plenty of time for the pair to turn it back around. The Commodores are certainly going to need better shooting from both of them if they are to get back in the range of 12-15 made threes a game, a range that Stackhouse has highlighted multiple times as a solid place for his team to be offensively.

Perhaps the shooting is beginning to come back around as the Commodores shot 8-22 from deep against Florida, a marked improvement over the last two shooting outings. Another good sign for Vanderbilt is that Max Evans is slowly coming out of his early slump, making a pair of threes in each of the last two games.

Without a strong interior presence and with the defensive struggles mounting, making a plethora of threes appears to be Vanderbilt’s best path to success at the moment. The team showed they are more than capable of doing it at the beginning of their SEC season, and they will need to replicate that success to start winning some games.

It can feel like slim pickings right now to take some positives out of Vanderbilt’s 0-6 start to SEC play, especially considering how bad some of the losses have been.

But Scotty Pippen Jr. and Dylan Disu absolutely deserve tons of praise for their play this season. The sophomore pair have been outstanding, accounting for over 47 percent of Vanderbilt’s scoring. Pippen Jr. ranks second in the conference in both points and assists per game with 21.6 and 5.3, respectively. Disu’s 8.5 rebounds per game are also good for second in the SEC.

Both players were at their best against the Gators. Pippen Jr. poured in a career-high 32 points to go along with his six assists and five boards. Even at the very top of opposing teams scouting reports with double-teams being thrown at him constantly, Pippen Jr. is still able to score at will. He can convert at all three-levels: whether it be using his body to bank in tough layups, using a pump fake to get an open midrange jumper or pulling up from deep. He is also an expert at drawing fouls.

All of this was on display on Gainesville as he shot 12-22 overall and 4-7 from three. Florida threw numerous bodies at him and went through several different schemes, but none of it mattered. He kept the Commodores in it in the first half with his 18 points and, in the midst of their massive comeback attempt, he hit some timely buckets to make it interesting at the end.

Disu, who had to sit out the game against Arkansas due to health and safety protocols, was equally terrific, especially in the second half where he scored 14 of his 18 points. Disu was the key catalyst of the comeback as he out-hustled Gator players on the glass and corralled several loose balls, leading to several easy baskets for himself and his teammates.

Disu, who finished with nine rebounds, played with relentless and infectious energy that definitely spread to the rest of the team as they played with a ton of heart down the stretch. He’s the unquestioned emotional leader of the team and it showed against the Gators.

In Pippen Jr. and Disu, the Commodores have a pair of players that can match up with any other duo in the SEC in terms of talent. And if Vanderbilt can get a consistent third contributor, the offense could really take off. The two players are cornerstones of this program and, if the team is to get a win soon, it will almost certainly be on their backs.