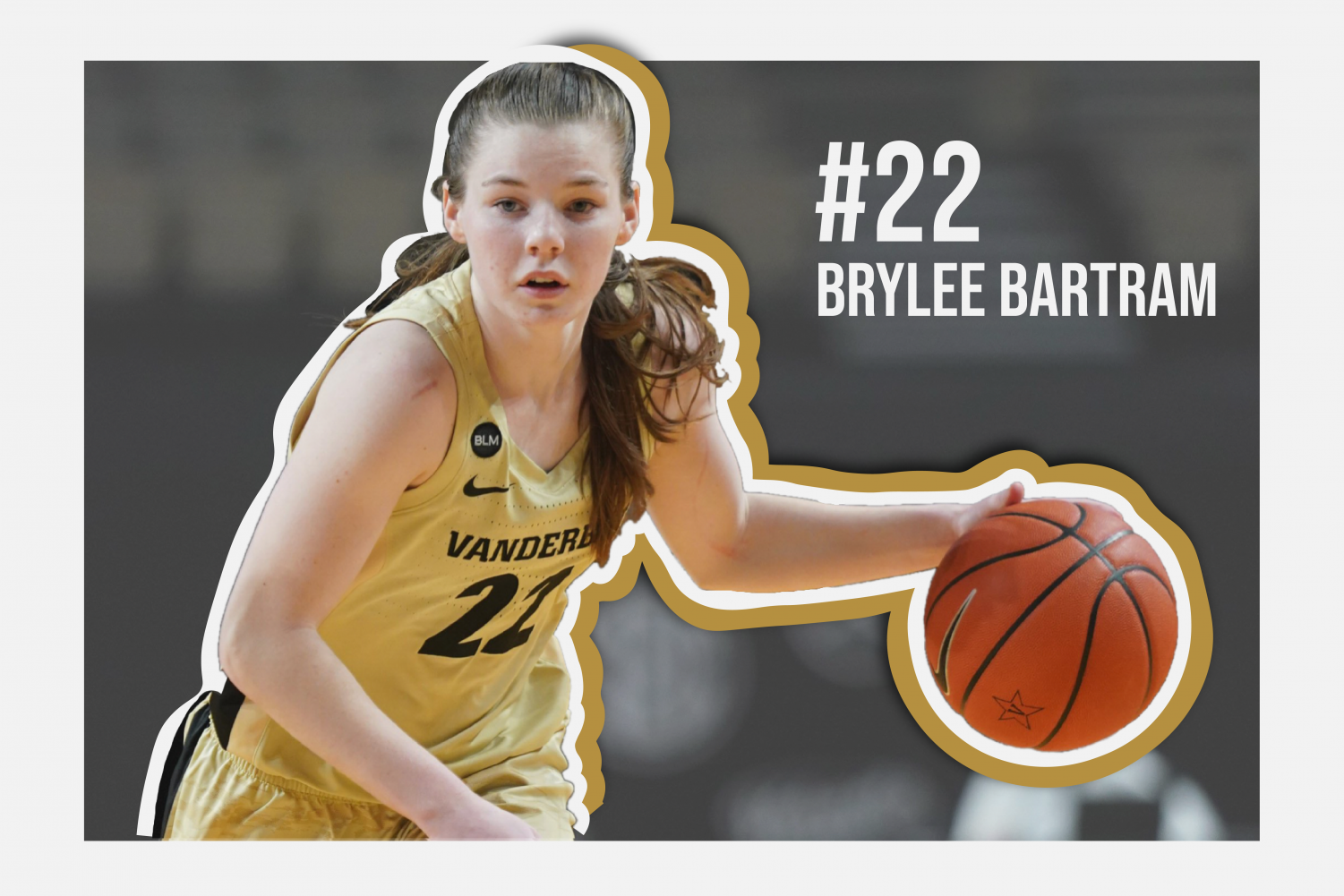 Brylee Bartram, who set the national high school record (boys or girls) in made threes with 533, brings a much-needed perimeter shooting boost to the Commodores.

Brylee Bartram made more three-pointers than anyone else in high school basketball history.

On Feb. 7, 2019, three games after she broke the female high school record of 500, Bartram knocked down five three-pointers in a playoff game, giving her 521 made threes for her career and breaking the previous overall record of 520. Bartram wasn’t done there, however, as she took advantage of a few more playoff games to add to her accomplishment—setting her official record at 533.

And while Bartram never made it a goal of hers to break the record—in fact, she wasn’t even aware she was creeping up on it until a few games before she broke it—she appreciates the magnitude of her accomplishment in hindsight.

“It’s definitely cool to be able to say I’m in a record book somewhere,” Bartram says.

After spending her first collegiate season at the University of Florida, Bartram has brought her prolific outside shot to West End, giving the Commodores a much-needed boost in terms of perimeter shooting.

It was no surprise when Bartram gravitated towards basketball at a young age; it’s in her blood.

Her father, Greg, played in 107 games at Penn State from 1991 to 1995. And it’s her father whom Brylee credits with both developing her as a player and instilling a strong work ethic.

“In those early middle school years, and even a little before that, we would go out and shoot every single day,” Brylee said. “ [We would] just get hundreds and hundreds of reps up.”

For every step of Brylee’s journey, Greg was right there with her.

The pair first began seriously working out together when Brylee was eight or nine years old and she started to become passionate about the game. And while Bartram is now known for her three-point prowess, it took a few years for her to even be allowed to start shooting from deep.

Her father had her shoot from just four feet away from the basket until she mastered that with perfect technique. After that, she would move just one foot back and only work on that shot. Brylee and Greg repeated this process until she was shooting free throws and eventually three-pointers.

“A lot of kids won’t really listen to you and do that, but she was very, very meticulous about making sure she was doing her routine,” Greg said. “She’s just always bought into really practicing her skill and working hard.”

As Brylee got older, Greg coached all of her teams up until she started playing varsity ball at Seffner Christian Academy in the seventh grade. And even then, Greg stayed very involved in both her high school and Amateur Athletic Union (AAU) programs.

Now, with Bartram approximately 700 miles away, Greg’s presence still looms large. The two talk after almost every game—good or bad. Some days Greg will point out little things he observed while watching the game. On days when Brylee is especially frustrated, he helps center her.

It’s not just Greg who Brylee credits with influencing her basketball career, however. Her mother Lisa and younger brother Blake, a high school basketball player, have also had a monumental impact on her development. All four Bartrams are incredibly passionate about the game, and basketball is frequently the main topic of discussion around the household.

“When we’re all at the house, there’s nothing on TV except some kind of basketball game,” Brylee says with a laugh.

Ask anyone about Bartram, and one of the first things they’ll mention is her confidence. No matter what the situation is, she’s always ready to fire from downtown. For Bartram, that belief in herself isn’t a luxury, but rather a necessity.

“If you’re not shooting with confidence, you shouldn’t shoot,” Bartram says.

And there’s no reason not to be confident when you’ve gotten up as many shots as Bartram has.

“I think the confidence just simply stems from the amount of time that she’s put in,” Greg said. “She’s just spent so many hours and so many nights getting up hundreds and hundreds of shots, and I think that’s where the real confidence comes in. At the end of the day, you can’t fool yourself. You know how much you’ve prepared for that moment so if you get into a game and miss a couple in a row, you know that you don’t hardly ever miss three in a row, so you just have that much more confidence that the next one is going in.”

Bartram is meticulous in her workouts and holds herself to incredibly high standards in every single drill she goes through. She watches tons of NBA sharpshooter Klay Thompson film, paying special attention to the way he moves off the ball and how he gets his shot off with very little space. While working out, she doesn’t move on to a different spot on the court until she makes a certain number of shots. If she misses two in a row, she starts the drill over from the beginning. Every time she works out it is with the mindset to get herself to where she “has to make every single shot that’s put up.”

Another major source of Bartram’s confidence is the fact that, for most of her career, she’s never played in her own age group.

“When I was in sixth grade, I played with the eighth-graders,” Bartram says. “When I was in seventh grade, I started playing varsity. It was the same with travel ball, too. I think that helped me so much just because you have to find ways to compete with these girls who are bigger than you, faster than you and older than you.”

Playing varsity as a seventh-grader—not just for any school, but for a program regularly competing for state championships—gave Bartram a new measuring stick for her play.

“Having the opportunity to play high school basketball in the seventh grade was physically challenging, but it was a very good experience for her to realize the things that she needed to do to get better,” Greg says. “I think the thing for her was that she was never in a situation where she could be complacent with her current level because she was always trying to reach the new level and trying to play another grade above.”

Oh, and she also put up 88 made triples during those two years, which would have brought her record to 621 made threes if those years were allowed to count in the record books.

Looking for a fresh start and a better fit after spending a year as a Gator, Bartram was instantly drawn to Vanderbilt as soon as she entered the transfer portal. A large part of the appeal had to do with the coaching staff. Bartram had known Kelly Komara, the Commodores’ associate head coach, for several years dating back to when Komara was recruiting her in high school. Moreover, Bartram was especially drawn to playing under head coach Stephanie White, who played in the WNBA herself.

Additionally, Bartram had previous connections with a couple of Commodore players. Both her and Koi Love were familiar with each other through the AAU circuit in Florida. And she played three years of high school basketball alongside Chelsie Hall at Seffner Christian Academy.

“She was definitely a huge factor [in my decision to come to Vanderbilt],” Bartram says of Hall. “She’s the best point guard in the SEC. It’s great knowing that I have a point guard that I can trust and that I know in-and-out.”

Though Vanderbilt’s 2020-21 season lasted just eight games before the team decided to discontinue their season over COVID-19 concerns and a lack of available players, Bartram made an immediate impact. The Commodores, who ranked dead last in the SEC last season in three point shooting at just 29.3 percent, were in dire need of shooters—and Bartram definitely fit that bill.

She started the final three games of the season, all against SEC opponents, and led the team in three-point makes with 24. She also shot 34 percent from deep and averaged 9.3 points per game. Bartram’s best game of the short season came in a 90-81 win over VCU, where she poured in six treys.

Bartram is certainly meshing well on the court with the Commodores, but she’s also found an environment that she loves, which is something that she highly prioritized when looking for her next stop.

“My teammates and my coaches have all made this transition very, very doable for me,” Bartram says. “They’ve really made me feel at home since I’ve been here, which was something that I was looking for. I really, really love the way that [they] have taken me in and made me feel included.”

Vanderbilt’s season may be over, but make no mistake: Bartram is going to play a huge role for the Commodores going forward.

The Vanderbilt Hustler welcomes and encourages readers to engage with content and express opinions through the comment sections on our website and social media platforms. The Hustler reserves the right to remove comments that contain vulgarity, hate speech, personal attacks or that appear to be spam, commercial promotion or impersonation. The comment sections are moderated by our Editor-in-Chief, Rachael Perrotta, and our Social Media Director, Chloe Postlewaite. You can reach them at [email protected] and [email protected]
All The Vanderbilt Hustler picks Reader picks Sort: Newest
Subscribe
Login
1 Comment
Newest
Oldest Most Voted
Inline Feedbacks
View all comments
F
Faye Burton

Where is Bartram now? She has not played in the last 4 games. Is she still on the team?