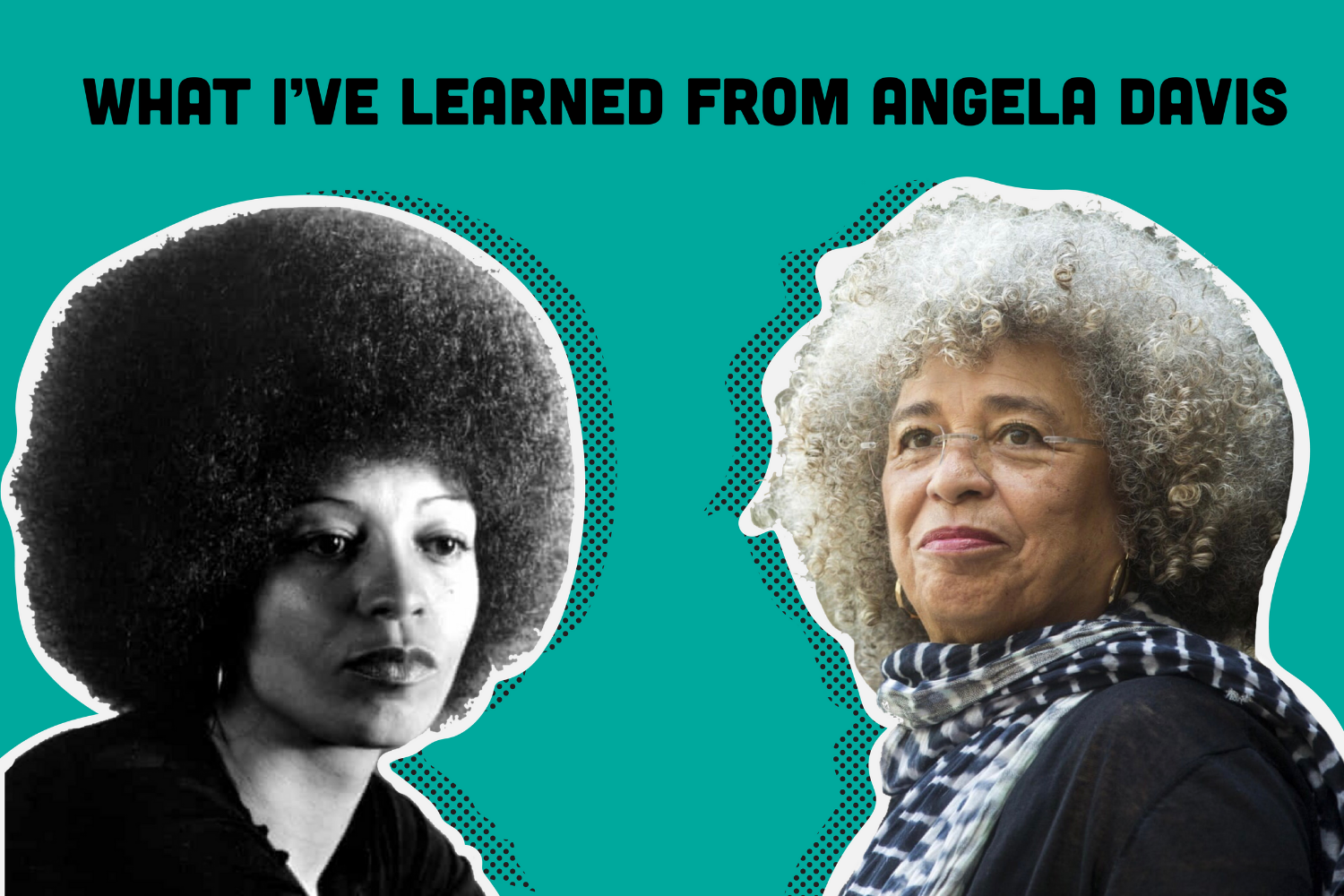 Here is one anecdote on the long list of things I’ve gained from Angela’s words. (Hustler Communications/Emery Little) (Emery Little)

Here is one anecdote on the long list of things I’ve gained from Angela’s words. (Hustler Communications/Emery Little)

THORNTON: Angela Davis and the worth of advocacy through one’s passion

Everyone loves a good movie. They allow us to escape the outside world and live the lives of other people, if only for two hours. There is a reason why action and adventure are consistently the most popular movie genres in the U.S. (with my personal favorite: the Black comedy coming in at #10). It’s the same reason why Marvel reigns supreme as the most profitable movie franchise in North America… by far, with multiple superhero franchises trailing behind it.

We want to root for someone. We want someone to save the day. Hell, we want someone to save the world. We pour so much into action movies, and we give so much for a happy ending. We pay for escapism. We crave it in fact: to get lost in a good book, to get sucked into a video game, to close one’s eyes and savor an album, to lose one’s self in a frenzy of passion, to daydream. There is nothing abnormal or wrong about escapism, and ultimately, the act is healthy. Yet in the midst of the comedown from escapism, it’s worth interrogating what we are escaping from and how we can work towards escaping it.

On Nov. 10 I listened to Dr. Angela Y. Davis speak at a seminar hosted by Vanderbilt Programming Board’s (VPB) Speakers Committee. Over the summer, I found myself engrossed in Davis’ work, particularly as I started examining what I want for my country outside of the framework of my electoral politics. I began reading her writings, watching interviews and listening to speeches of hers and other Black radicals I’ve come to admire.

My excitement for the seminar was high, and while I was disappointed that the bulk of the discussion revolved around the election, considering that Davis herself said the majority of change happens outside of electoral politics, many of her words stuck with me like tack on the corkboard of my brain for me to paste my sticky-noted ideas around.

In pointing out the crucial role of activism, Dr. Davis said, “It’s generally not presidents who determine the direction of history; it is oftentimes masses of people, whose names we do not know, who was responsible for the changes that took place in, for example, the mid-twentieth-century freedom movement. The Civil Rights Movement was not initiated by the government–that came from the people.”

She went on to highlight that the initiative for change is “not all happening in Washington.” In short, we can’t let the election solely define our forward trajectory.

To emphasize her point, she noted that the Supreme Court never initiated any major change, but is instead a reflection of major change in regards to landmark decisions that have guided the ambit of America. The late justice Ruth Bader Ginsberg exemplifies this point. “Ruth Bader Ginsburg pointed out that the work that she was doing for women’s equality didn’t really happen on the Supreme Court,” Dr. Davis said, but rather it was done outside of the courthouse. She continued that it was only when the public began to challenge the patriarchal structures of our society that we began to see progressive, feminist decision making.

“Now is not the time to expel a sigh of relief.”

When Biden officially became the president-elect, I made the mistake of scrolling through Instagram stories, watching many of my peers expel. Several comments reminded me starkly of the notion that we were in a post-racial America after Barack Obama’s two-term presidency. They seemed to pretend that a Biden/Harris administration will somehow solve institutional discrimination and political terrorism, neither of which has ever been absent from the American apparatus.

Even so, people continue to crave escapism and to wish for a superhero: for Biden to “save” us. There is value in removing a danger like the current White House occupant, in regards to the pandemic, economy, climate change, et cetera. So, while a Biden presidency will “save” some aspects, he ain’t saving me or you. Protest saves us. Activism saves us. Education saves us. Mobilization and community organizing saves us. Mutual aid saves us. The act of working towards an equitable society saves us.

While the goal of “saving” anyone is debatable, Angela Davis emphasized that there’s not only one way to do the work of advocacy. She pinpointed the value of molding public consciousness, explicitly citing the Black Lives Matter (BLM) movement as a case study. Throughout 2017, 4o-42 percent of the public opposed BLM, while 18-20 percent neither supported nor opposed. Those numbers slowly decreased in 2018, with the support for BLM rising by a 28-point margin this summer and by a 17-point margin even before the wave of protests began. In 2013 when BLM began in response to the killing of Trayvon Martin, a majority of voters disagreed that the police were more likely to use deadly force against African-Americans. A majority disagreed that Black people face a lot of discrimination. And a majority disagreed that the anger of the 2013 protesters was fully justified.

When asked in 2020 the majority agreed with all of these statements.

Although it’s confounding that the majority of Americans can recognize these issues and around half of voters still voted for the current president, the expeditious sway of public opinion this summer is astounding. Actual instances of the violence sway the opinions of some, but as Angela Davis showed, the molding of “public consciousness” ultimately catalyzed this change. Public consciousness is molded by the news and media, but also by education, art, literature, protest, demonstrations and more, that disrupt the people’s everyday habits. In this molding, we are all sculptors.

Dr. Davis has this wonderful quote–I listen to it often, as I’ve placed this specific speech excerpt on one of my Spotify playlists. In her 1999 speech on the prison industrial complex, she said, “I want to begin by suggesting that whoever you are, wherever you are, whether you are a student, an academic, a worker, whether you are a person involved in your church, whether you are an artist, there are always ways to gear your work towards progressive radical transformation.” In the short time Dr. Davis was given to answer questions, I walked away with a challenge that expanded on this idea from her 1999 speech.

The collective character of challenges and resistance is that there is very little we can do as individuals if we only imagine ourselves as such. Our proclivities “become effective when they become a part of a collective struggle and a collective campaign.” Thus, she encourages us to think deeply about what it is we enjoy and figure out how to contribute through the means of our passions. The same thing could apply to our postgrad plans. Whether you’re going into the arts, medicine, law, tech, academia, business, entertainment, music, engineering, education… there’s always a way to incorporate movements in which you’re passionate about into what you do. It may seem overly obvious, but her words stuck with me: if we contribute to a movement by doing what we love, it is more likely to become a lifetime commitment.

I love to write, something I usually employ for escape. So here I am. It may not be much, but it’s something. What do you love to do?

The Vanderbilt Hustler welcomes and encourages readers to engage with content and express opinions through the comment sections on our website and social media platforms. The Hustler reserves the right to remove comments that contain vulgarity, hate speech, personal attacks or that appear to be spam, commercial promotion or impersonation. The comment sections are moderated by our Editor-in-Chief, Rachael Perrotta, and our Social Media Director, Chloe Postlewaite. You can reach them at [email protected] and [email protected]
All The Vanderbilt Hustler picks Reader picks Sort: Newest
Subscribe
Login
2 Comments
Newest
Oldest Most Voted
Inline Feedbacks
View all comments
T
Tom Levensailor

I love to escape but I am aware of reality. Angela Davis is an avowed communist whose guns were used in the killing of four of our citizens. There is nothing to admire in her that I can see.

I agree with the above. Then she went to communist Cuba and was protected there by the Cuban ruthless communist regime. She has never acknowledged nor denounced all the human rights violations by the Castro family and the communist in Cuba. Why is that? Oh, I forgot, people murderer by the left don’t count.