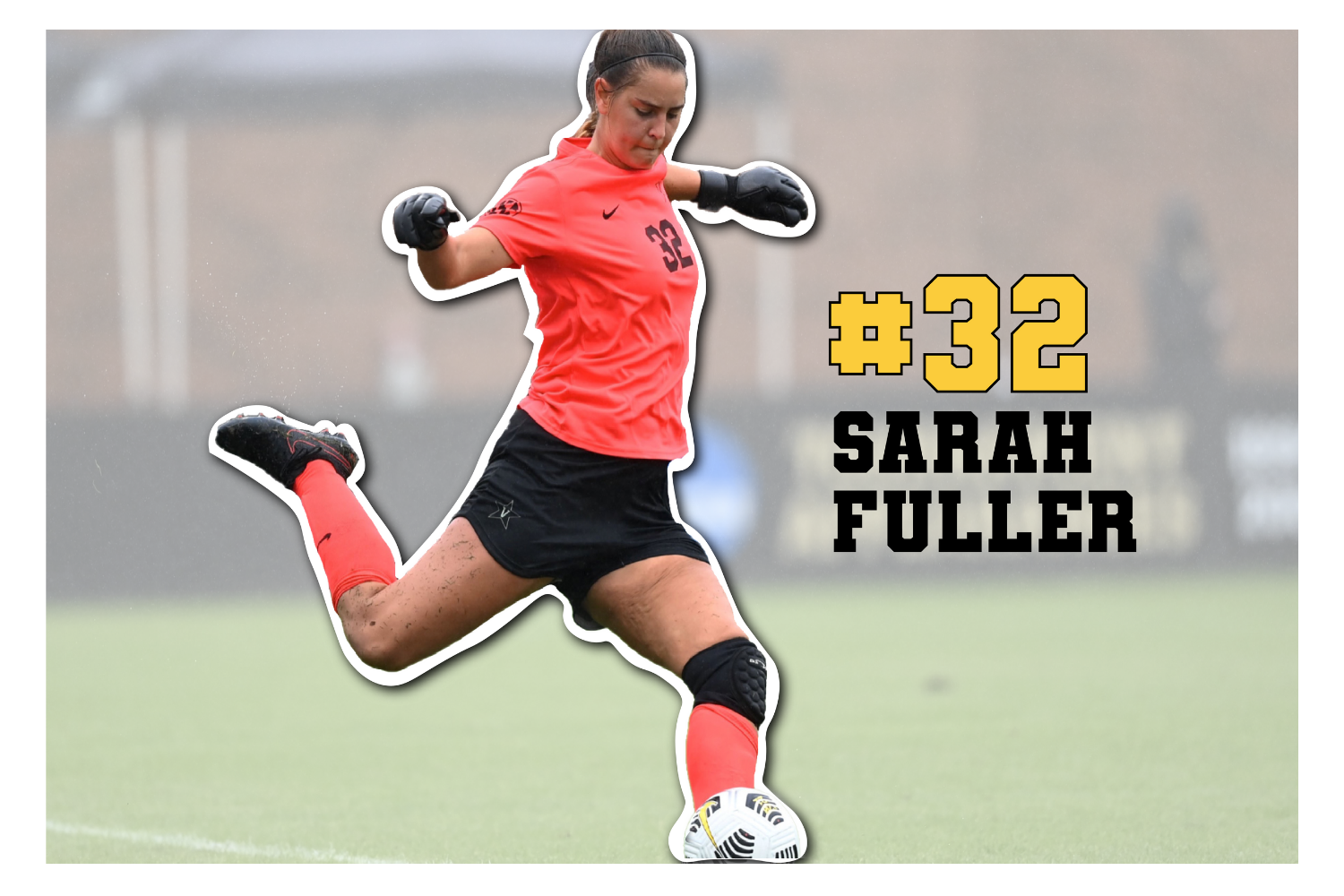 Since she took over the starting goalkeeper job, Sarah Fuller has gone 3-2, recording 20 saves and surrendering five goals.

Nothing has come easy to Sarah Fuller throughout her four seasons as a Vanderbilt goalkeeper.

First, it was a broken foot her freshman year. The next year, it was major back issues. Fuller’s junior year was the first season she was fully healthy, but she saw very limited playing time. And then in 2020, her senior season, she lost out on the starting goalkeeper job to sophomore Sophie Guilmette in a close preseason battle.

For many players, it would have been easy to give up or turn their attention elsewhere after all the setbacks. Fuller, however, chose to make the best of it by both working hard and being the best teammate possible.

“I think the main thing I learned was just because you’re not out on the field doesn’t mean you can’t make an impact on the team,” Fuller says.

After the team’s disappointing 1-2 start to this season, Coach Darren Ambrose finally called Fuller’s number. On Oct. 11, 2020, Fuller made her first start in goal against South Carolina.

“Sarah continued to chomp at the bit, and she came in and pleaded her case,” Ambrose said of the decision to make the change. “And we said ‘Don’t tell me, show me’. Don’t tell me you’re a good goalkeeper, you have to show me.’ And she did it. To her credit, she responded that time she got in. And that was it. She’s held the position since then.”

Fuller admits she had some first-start butterflies. She laughingly recalls forward Olivia Simmons pointing out that her hand was shaking in the pregame huddle. But once the game began, it all felt natural.

“As soon as the whistle blows you just kinda get zoned in,” Fuller says. “I’ve played soccer my whole life, so it’s just second nature after training for so long. Once it starts you’re just like, ‘Oh yeah, I remember how to do this.’”

The Commodores eventually fell to the Gamecocks 2-1 in a double-overtime heartbreaker. But Fuller was solid in her debut, recording six saves.

Since that point, Fuller has held onto the starting job and has helped the Commodores to a 3-1 finish to the season. In her five total starts, she has made 20 saves and only allowed five goals. Two of her five games have been shutouts.

“I kinda compare it to the Tom Brady moment where he was one of the last picks [in the draft],” Fuller says. “But once he finally got to start playing, he never let it out of his grip.”

Ambrose noted that he saw a shift in Fuller’s mentality this season that led to her improvement on the field.

“Our encouragement to her was, ‘Don’t wait to be queen to wear the crown,’” Ambrose says. “In other words, you need to work harder than you’re doing now, because when it’s your turn, it’s your turn. There were moments I think that she didn’t see that until later on. And then when she did really finally knuckle down and start to apply herself we saw this growth and improvement in her because I think she’s operated under the radar [previously].”

Fuller says her recent success has been sweet. But it’s even sweeter considering that she only appeared in two games prior to this season.

Even when she was finally healthy last year, Fuller only saw action in one game given that she played behind a dominant combination of goalkeepers in Lauren Demarchi and Taiana Tolleson, who were both important figures to her.

“They were great mentors to me and a fantastic example,” Fuller says of Demarchi and Tolleson. “When it came to this year, I was just really fortunate when my name was called to have had all that experience [with them].”

Ambrose noted that her recent improvement is not so much a factor of a huge jump in skill, but rather a gradual progress of hard work and dedication.

“She showed up everyday like everybody else,” Ambrose says. “She got wet. She got dirty. She threw herself around; she sacrificed her body. And as time has gone on she’s done that more and more, and she’s done it better and better.”

The road to this position has not been an easy one, but it has certainly taught Fuller several valuable lessons along the way.

“I’m not a patient person, but it definitely has taught me patience,” Fuller says with a laugh. “It taught me it’s not always playing that matters, it’s being a good teammate. I learned that maybe I’m not playing, but I can push my teammates to be better.”

This weekend, Fuller and the rest of the Commodores head to Orange Beach, Alabama for the SEC Tournament, where they will face Mississippi State in their first game on Nov. 15, 2020. This will be her first appearance in postseason play, but both Fuller and Ambrose are confident that the lights won’t be too bright for her.

“She’s earned her time,” Ambrose says. “She has sat and trained everyday. The moment is right now.”

The Vanderbilt Hustler welcomes and encourages readers to engage with content and express opinions through the comment sections on our website and social media platforms. The Hustler reserves the right to remove comments that contain vulgarity, hate speech, personal attacks or that appear to be spam, commercial promotion or impersonation. The comment sections are moderated by our Editor-in-Chief, Rachael Perrotta, and our Social Media Director, Chloe Postlewaite. You can reach them at [email protected] and [email protected]
All The Vanderbilt Hustler picks Reader picks Sort: Newest
Subscribe
Login
2 Comments
Newest
Oldest Most Voted
Inline Feedbacks
View all comments
L
Linda Townzen

She comes from a strong family and has faith in God. That is the difference maker.

Proud of Sarah’s success and her dedication