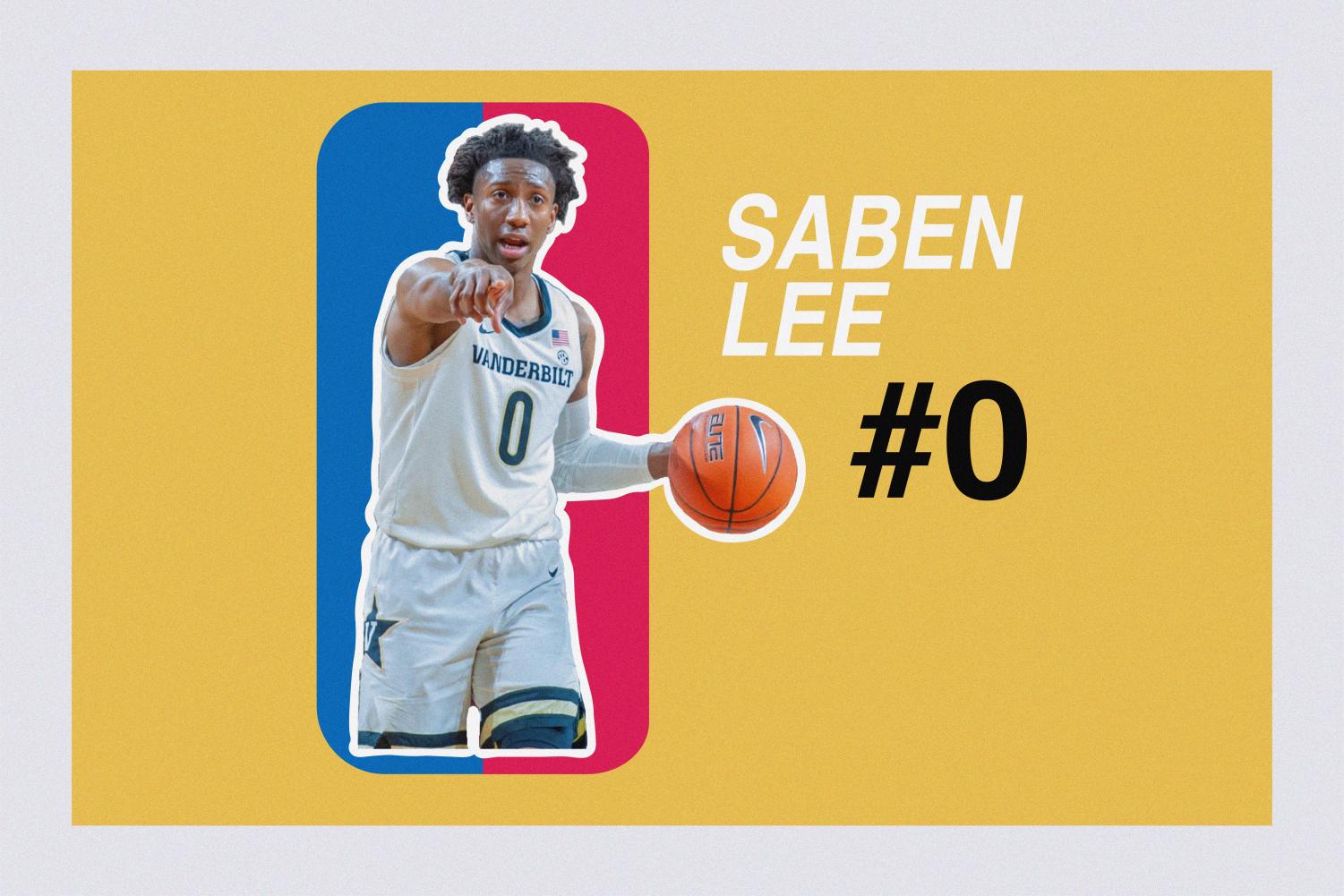 Saben Lee leaves Vanderbilt as one of its all-time leading scorers. (Emery Little)

Saben Lee leaves Vanderbilt as one of its all-time leading scorers.

After an All-SEC junior season, Saben Lee leaves Vanderbilt as its 23rd all-time scorer and prepares for the NBA Draft with some uncertainty, but a clearly-defined skill set.

Saben Lee did not have a traditional NCAA experience. A highly touted recruit from Arizona, Lee arrived at Vanderbilt after head Coach Bryce Drew led the Commodores to the NCAA Tournament in just his first season on West End. But what ensued in his three years in the black and gold was what many would describe as chaos.

In a roller coaster of events, Lee declared for the NBA Draft in late March after playing for two different head coaches, working with three different athletic directors and winning just nine total SEC games. He watched humbly as Bryce Drew recruited Darius Garland to be the lead point guard in the offense last year. He stayed patient as new head coach Jerry Stackhouse elected to bring him off the bench to begin this season. And throughout both his sophomore and junior years, he helped the Commodores withstand injuries, stepping seamlessly into a leadership role that he was not necessarily granted to begin the season.

While Lee’s time at Vanderbilt may be associated with losing, his team’s lack of success should not dissuade NBA teams from taking a chance on him. He almost singlehandedly willed the Commodores to three huge SEC victories this past season, and he will be remembered as the catalyst in the breaking of Vanderbilt’s 26-game SEC losing streak. In a historic effort, Lee led the Commodores into a game they had no business winning, scored 33 points and brought a touch of magic back to Memorial Gymnasium when the Commodores upset 18th-ranked LSU this past February.

Despite the ups and downs of his time at Vanderbilt, Lee leaves Nashville 23rd on Vanderbilt’s all-time scoring list, distinguishing himself as one of the best players in school history and culminating his three-year career as an All-SEC Second Team performer.

His consistent drive and commitment to his coaches and teammates are admirable. In addition to his unique skill set, his resilience, determination and leadership are all qualities he can hang his hat on as he begins to face the uncertainty of the NBA Draft.

At just 6’2”, 183 pounds, Lee is not an intimidating presence on the court, but that certainly does not stop him from posterizing defenders and creating mismatches. Lee’s athleticism and leaping ability at his small stature are bound to set him apart among the talented 2020 NBA Draft pool.

Lee averaged double-digit points each of his three seasons on West End and led the Commodores in scoring both his sophomore and junior seasons. But upon Aaron Nesmith’s injury this past winter, Lee, for arguably the first time in his Vanderbilt career, became the primary scoring option.

He completed his junior campaign fourth in the Southeastern Conference (SEC) in points per game and ninth in field goal percentage. In 18 games without Nesmith, he averaged over 20 points, while still shooting over 52 percent from inside the three-point line. In total, Lee scored over 30 points 4 times during his junior year, 2 of which resulted in Commodore victories.

Lee certainly expanded his use of the three-point shot this past season, but the majority of his points have come closer to the basket. For his career, over 71 percent of Lee’s shots have come from inside the three-point line, where he has never shot below 49 percent in a season.

Considering the fact that he played on Vanderbilt teams riddled with injured stars and weaker talent, his ability to maintain a high field goal percentage while being one of the only scoring threats on the court is extremely impressive. He was used on approximately 30 percent of the Commodores’ possessions this year and accounted for over 25 percent of Vanderbilt’s total points for the entire season.

As an elite driver with a small body, Lee was able to create nearly five points per game at the free throw line, where he shot over 75 percent his junior year, up eight percentage points from his sophomore campaign. He finished second in the SEC in free throws made during his junior season.

Apart from his scoring, Lee served as a do-it-all guard for the Commodores throughout his three seasons. As the main facilitator in the Commodore offense this past season, he ranked fifth in the SEC in assists per game and seventh in total steals. Defensively, Lee showed flashes of dominance, tallying over 120 steals during his three-year career and leading the Commodores in total steals both his freshman and junior seasons.

As the above graphic shows, few players in the country had a greater overall impact on their team than Lee. He was in elite company by being one of just five players in Power Five conferences to tally over 18 points, 4 assists and 1.5 steals per game. He was asked to do a bit of everything for the Commodores this past season, and certainly delivered.

Lee’s strengths undoubtedly lie in his ability to be an elite isolation penetrator and finisher. He is able to do this thanks to incredible athleticism and a wise understanding of his body and defenders. In the NBA, he will be able to use this athleticism in pick-and-roll scenarios, much like he did in Jerry Stackhouse’s offense this past season.

Lee is a matchup nightmare when switched onto larger defenders in a pick-and-roll. His hesitation and ability to quickly change speeds are a menacing combination for more cumbersome defenders and he boasted arguably the quickest first step in the country last season. In addition, he is able to freeze opponents with an elite in-and-out dribble that he pairs with a quick burst of speed that few defenders in the country were able to keep up with.

After blowing by defenders, Lee has excellent body control and a wise frame of attack when sizing up interior help defense. His “herky-jerky” style of play in the paint relies on creative body movements to get shots up over and around defenders. He has an array of extremely elusive ball fakes to get opponents in the air, and clever spin and dribble combinations that create just enough space for him to find the rim. He is able to curve and manipulate his body in many different ways allowing him to finish via floaters, reverse lay-ins, and–especially–dunks. With his elite elevation, he is a walking highlight reel who consistently left opponents posterized via tomahawk and alley-oop slams during his time as a Commodore.

Arguably Lee’s most important strength is his ability to absorb and use contact to his advantage. As a smaller player, he is not afraid to drive downhill at a defender, rather than trying to avoid them in order to finish at the rim. Lee frequently drives straight into post players, absorbs contact, draws a foul, and sometimes even converts the and-one. He excels at getting to the free throw line consistently, which will create a steady source of scoring from him at the next level.

Apart from his ability to score the basketball, an unnoticed portion of Lee’s game lies off the court, both in his mental approach to the game and his ability to improve.

Lee’s leadership and maturity through three grueling years of basketball should not go unnoticed. Despite injuries and hardship, Lee helped turn away a dreadful 26-game SEC losing streak and successfully bridged the gap between the Bryce Drew era and the Jerry Stackhouse era.

In addition, his consistent improvements over three years at Vanderbilt are evidence of a player who understands his own skill-set. As his opportunities continued to come, he continued to make the most of them. Statistically, he improved his field goal and free throw percentage from his sophomore year while also notching more rebounds, assists, steals and points per game in relation to years prior. Fundamentally, he improved his jump shot and increased his use of it, wisely recognizing its importance at the NBA level.

Despite these improvements in his shooting, Lee nonetheless lacks refined shooting abilities. Although he attempted more threes this past season than any season prior, Lee’s fundamentals will need attention at the next level.

Off the bounce, Lee is a relatively competent three-point shooter, but his release is slow due to a slight hitch in his shot. Over the course of his college career, he worked toward eliminating it and certainly was getting shots off much faster during his junior year. In addition to eliminating this hitch, he will need to work on getting more elevation when shooting in order to shoot over larger defenders in the NBA. His willingness to attempt and hit clutch threes was on display throughout his junior year, and with refined mechanics, he has the potential to be a three-point threat.

With the ball in his hands, Lee can be a dangerous creator. He has the athleticism and talent to finish and find teammates. But what he needs to improve is his timing out of the pick-and-roll. He had a tendency to become impatient, leading him to begin attacking before the screener was set. By remaining patient and looking for teammates more often off the dribble, he can become more multidimensional in the pick-and-roll.

Off the ball, Lee will need to work on his spot-up shooting and cutting. These are things he was never asked to do at Vanderbilt because he often had the ball in his hands. But in the NBA, he does not project as a ball-dominant player and will need to develop off-ball skills.

Defensively, Lee has terrific speed and hands. By combining these intangibles with improved defensive positioning, he can become a plus defender. In order to prevent his small stature from deterring him on defense, Lee will need to be fundamental in his defensive positioning while continuing to rely on his active hands to create extra possessions for his team.

Lee projects as a spark plug scorer off the bench and has a perfect skill set for that role. By developing a more consistent three-point shot and expanding his capabilities on defense, Lee could easily become a valuable sixth man or even fifth starter.

With his unique combination of size and athleticism, Lee shows flashes of Eric Bledsoe and Terry Rozier. Both players are not terrific outside shooters but can score at a high clip. All three possess elite leaping ability; furthermore, both Bledsoe and Rozier began their careers as role players, a spot Lee will likely find himself in to begin his NBA career.

Curiously, Lee was not present on the list of NBA Draft Virtual Combine participants. It is certainly possible he conducts individual workouts with teams, which would be a significant opportunity for him to display his athleticism in a combine-type atmosphere.

There are plenty of teams at the backend of this draft that could use a spark-plug bench scorer. But one team in particular that needs to target isolation scorers is the Philadelphia 76ers at pick number 58. The 76ers ranked 26th in the NBA last season in bench scoring and slowly began appreciating the contributions of second-round scorer Shake Milton late in the season. Look for them to turn to the second round once again and select Vanderbilt’s elite scoring guard.