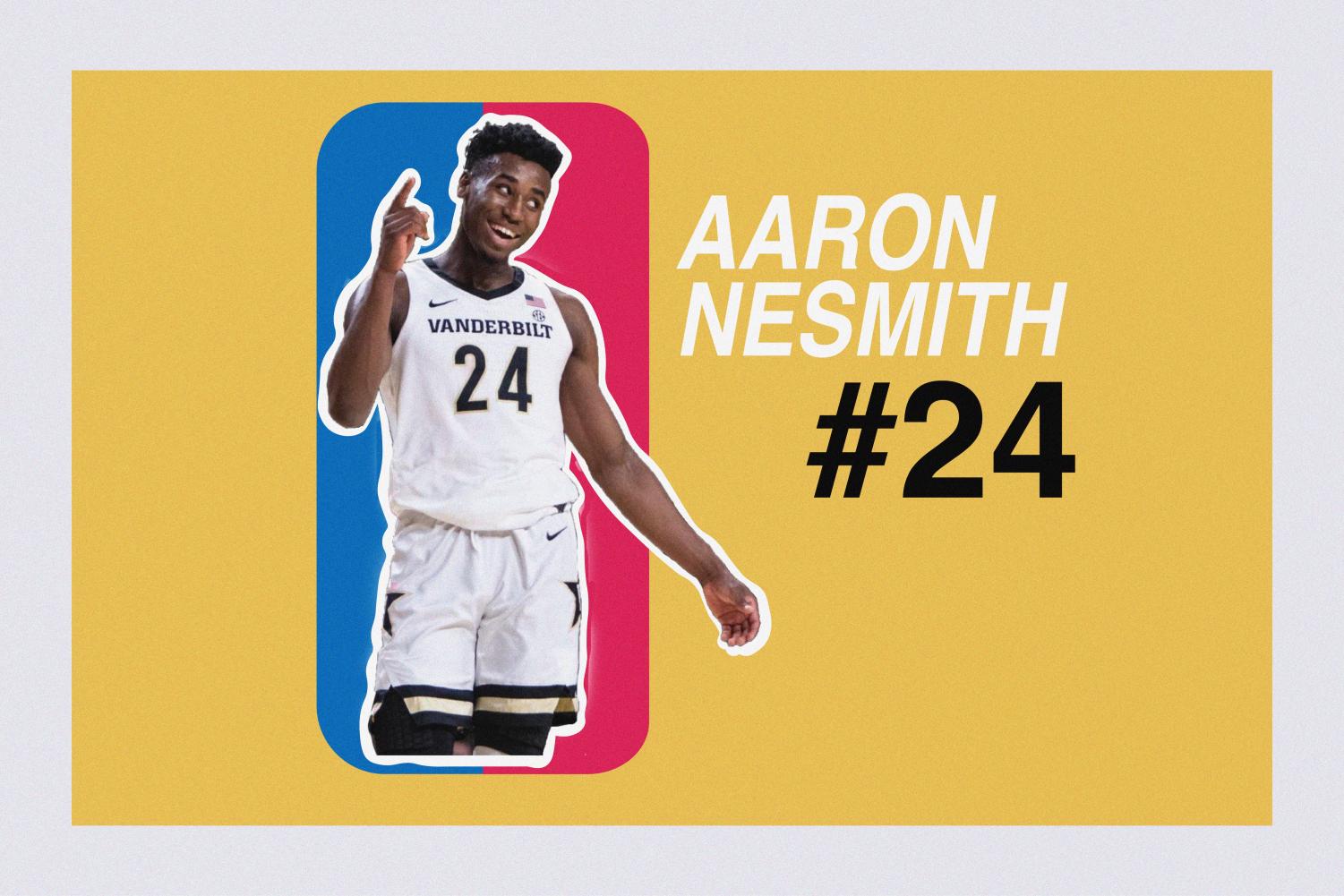 Former Vanderbilt guard Aaron Nesmith is one of the top prospects in this year’s NBA Draft. (Emery Little)

Former Vanderbilt guard Aaron Nesmith is one of the top prospects in this year’s NBA Draft.

After his All-SEC-caliber season was cut short by a stress fracture, Aaron Nesmith entered the NBA Draft as one of its premier wing shooters.

The 2020 NBA Draft is finally upon us. After the Draft was originally scheduled for late June, NBA teams will officially get the chance to add young talent to their rosters on Nov. 18. And former Vanderbilt guard/forward, Aaron Nesmith, is poised to hear his name called in the first round.

When Nesmith arrived on West End in August of 2018, he went under the radar. Despite winning South Carolina Gatorade Player of the Year his senior year of high school, he was the third wheel to former head coach Bryce Drew’s legendary recruiting class: a class that featured two five-star centerpieces in Darius Garland and Simi Shittu, and Nesmith, a four-star, who was expected to simply provide shooting off the bench.

As the 2018-2019 season dragged on and injuries plagued the Commodores, Nesmith, a freshman, was given more opportunities. He started the team’s final 19 games, and with an intensity that few in the black and gold have ever matched, Nesmith nearly willed a depleted and dejected Vanderbilt team to an unthinkable victory over Tennessee late in the season.

A productive freshman campaign coupled with the departure of Bryce Drew and many former Commodores put Nesmith next in line to star for new head coach Jerry Stackhouse. And that is exactly what he did. With incredible accuracy from the three-point line, unparalleled attention to detail and a coach who set him up perfectly within the offense, Nesmith’s play began to gain recognition.

Amid his dramatic rise up draft boards and the Commodores’ noticeable improvement, the Vanderbilt basketball injury curse reared its ugly head once again, and Nesmith’s All-American caliber season was cut short by a stress fracture in his foot.

But after ample time to heal and a wise decision to enter the NBA Draft, Nesmith is primed to be a lottery pick. And there are few players in this year’s Draft who can rival his consistency.

Standing at 6’6” and 213 pounds, Nesmith has a similar build to elite three-and-d floor spacers such as Danny Green, Klay Thompson, and Robert Covington. With his 6’10” wingspan, he projects to be a solid defender who can cover ample ground while using his long arms to impede shots. He has shown an ability to be creative with his body around the rim, and with fantastic elevation on his jump shot, he is a difficult matchup for smaller opposing guards.

In his 46 games as a Commodore, Nesmith averaged 14.7 points per game primarily using premier marksmanship from distance. He made 59 three-pointers his freshman year and 60 his sophomore year in only 14 games of action.

His improvements from his first year were noticeable both on the court and in the box score. At the time of his injury, he ranked fifth nationally in scoring, averaging 23 points per game, while leading the SEC in scoring, three-pointers made and three-point percentage.

Nesmith set a Vanderbilt record last season by shooting 52.2 percent from three-point range, and his career-high 34 points against Richmond were the most by any Commodore on the road since Billy McCaffrey in 1993.

Ironically, Nesmith shot a higher percentage from beyond the three-point line than inside of it. With over 56 percent of his shots coming from deep, Nesmith was a high-volume, high-efficiency shooter for the Commodores.

In his 14 games, Nesmith scored over 20 points nine times. And at the time of his injury, he was one of only two players nationally to have made seven-plus three-pointers in four different games. Despite missing the team’s remaining 18 contests, he still finished tenth in the SEC in three-point field goals.

Apart from his scoring, Nesmith figures to impact the box score in three other categories: minutes, rebounds and steals. He demonstrated an ability to play at a high level deep into games, logging over 31 minutes in all but one game this past season. Nesmith has also shown his capabilities as a rebounder and defender. He averaged over five rebounds and about 1.5 steals per game this past season, demonstrating a willingness to play defense and be aggressive away from the ball.

Nesmith’s primary usage this past season was rooted in beautiful set plays from head coach Jerry Stackhouse. Nesmith is undoubtedly a phenomenal spot-up shooter, but what sets him apart is his ability to quickly square up off of movement. According to Synergy, he was third in the country in points per game off screens, averaging 5.6, and was fourth overall in efficiency off screens.

Three things enable Nesmith to be so prolific off of screens: quick feet, constant motion and accurate reading of defenses. First, Nesmith’s quick feet combined with his long athletic build enable him to get to the ideal spot following screens. In the split second that his defender is caught up in a screen, Nesmith is able to spin, hop or step quickly into the perfect position to catch a pass and launch a shot before his defender has time to recover.

Secondly, Nesmith simply never stops moving. Regardless of whether he is near the ball or expecting a pass, he is always looking to move and set screens for his teammates. As a shooter, one of the most effective ways to get open is setting screens for others because it distracts the defense and forces switches. And not only was Nesmith always looking to set screens, but he set good, hard screens that forced defenses into tough situations.

And lastly, Nesmith is an intelligent reader of defenses. He quickly processes which direction his defender may travel around a screen and adapts to combat it. He identifies when his defenders are off-balance, in a bad position or overplaying, helping him further exploit defenses.

When he is not set up by a screen, Nesmith relies on convincing ball fakes and balanced step-backs to produce his own shots. While he is not an advanced off-the-dribble player, he has a deep arsenal of quick movements that he uses to create space.

Nesmith frequents a head fake followed by a side step, a menacing combination against off-balanced defenders. His head fake often results in defensive fouls and trips to the free throw line, where he is an efficient, 82.5 percent shooter. Once he has created space, he uses a high release and terrific elevation to prevent his shot from being blocked or interfered with.

Defensively, Nesmith has active hands and a long wingspan to disrupt opponents. He may not have been an elite defender, but when engaged, Nesmith was consistently effective on defense this season. He averaged 1.5 steals per game and featured several highlight-reel blocks indicative of his determination and athleticism. But moving forward, what will set him apart defensively is his IQ and feel for the game. Coach Stackhouse has described him as very coachable, and with his understanding of the game, there is plenty of room for NBA coaches to work with him on his defensive positioning and strategy.

Nesmith is a refined shooter, but in order to become a prolific all-around scorer in the NBA, he needs to develop three aspects of his game: his passing off a live dribble, his paint scoring and his handle.

Nesmith will continue to operate off screens in the NBA, but in order to become an elite threat from three-point range, he will need to improve his passing off the dribble. When he is not open for a shot off a screen, Nesmith typically puts the ball on the floor. In these situations, he is seldom looking to pass. Nesmith averaged less than one assist per game this past season, and in order to become a more versatile playmaker, he needs to improve his vision and pocket bounce pass in order to find rolling teammates off screens.

Secondly, to take pressure off his three-point shot, Nesmith needs to add another scoring dimension to his game. Only 27 percent of his points this past season came inside of the three-point line, and many of those were breakaway layups or dunks at the rim. The three-pointer will always be his bread and butter, but by adding a paint floater or a 15-foot pull-up jumper, he could become more dynamic and unpredictable, especially coming off screens.

And finally, in order to be comfortable passing and shooting off the dribble, he needs to be able to move more freely with the ball in his hands. By improving his handle, he will be more controlled in congested areas. This will allow him to get up quicker mid-range shots and be a more comfortable passer in the lane as well.

With a unique blend of IQ, athleticism and shooting, Nesmith possesses the same traits as  many of the best shooters in the NBA. His quick release and ability to square up off of screens are reminiscent of Clippers sharpshooter Landry Shamet. Many of his fakes and step-backs bear resemblance to C.J. McCollum. And his athleticism and elevation remind one of Buddy Hield.

However, Nesmith is bigger than all three of these players. His additional 2 inches and 15 pounds will give him the chance to be more than just a three-point shooter if he can develop other aspects of his game.

Nesmith will not be participating in the NBA’s virtual set of combine workouts. This is likely due to his continued recovery from a foot injury. Despite this, his skillset is far too coveted for him to fall out of the lottery. However, with this skillset, he fits seamlessly into just about any NBA system, which makes it very difficult to predict where he will fall.

But the Sacramento Kings are slowly moving towards Western Conference relevancy, and this offseason, they brought in Monte McNair, an understudy of former Houston Rockets General Manager Daryl Morey, to replace Vlade Divac as team General Manager. The future of wings Harrison Barnes and Buddy Hield seem to be very much up in the air, and with McNair likely to shift the Kings strategy towards analytics, Aaron Nesmith fits very well. If the Kings are to move one of their highly-paid wings, they will certainly be looking for a young replacement, giving Nesmith the chance to step in alongside up-and-coming star De’Aaron Fox as a cornerstone of the Kings’ future.

The Vanderbilt Hustler welcomes and encourages readers to engage with content and express opinions through the comment sections on our website and social media platforms. The Hustler reserves the right to remove comments that contain vulgarity, hate speech, personal attacks or that appear to be spam, commercial promotion or impersonation. The comment sections are moderated by our Editor-in-Chief, Rachael Perrotta, and our Social Media Director, Chloe Postlewaite. You can reach them at [email protected] and [email protected]
All The Vanderbilt Hustler picks Reader picks Sort: Newest
Subscribe
Login
1 Comment
Newest
Oldest Most Voted
Inline Feedbacks
View all comments
T
TatumSuperFan0

Great article, you clearly did your research. I’m honestly impressed by the quality of this piece. Accurate reporting on Nesmith, combined with a video and infographic. I’m reading this late at night and considered just skimming through it, but it was so good I had to read it all (and comment).
I am hoping Nesmith falls to the Celtics though.