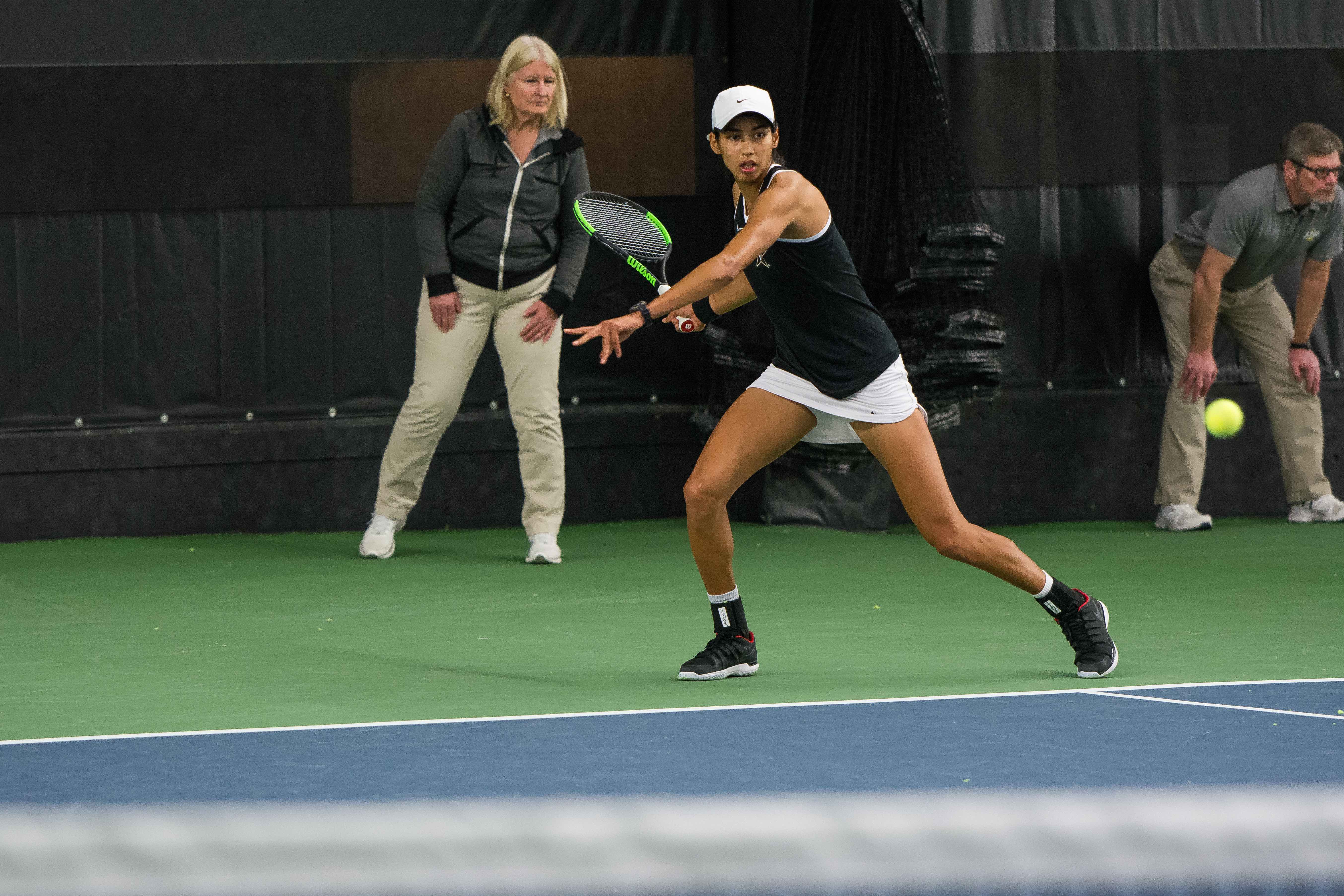 After leading Vanderbilt to a 2015 national championship, the tennis star is rocketing up the WTA Rankings on tour – but she still returns to Nashville to train with Vanderbilt coaching staff.

“Can you think of a Vanderbilt athlete – male or female – who has achieved more?”

Astra Sharma revolutionized the Vanderbilt Women’s Tennis program but she’s not finished yet.

When Coach Macdonald first heard about Sharma, the young Australian player, he knew she was special. What he didn’t know was if he could even convince her to continue playing tennis on a collegiate level in the United States.

“She’s a superb athlete,” said Macdonald, who served as head coach during Sharma’s tenure. “She could have played soccer—they wanted her on the national team at the junior level. She could have done track and field, too.”

The multi-talented and extremely athletic Sharma also would be straying from the traditional Australian path to playing professional tennis if she attended university in the United States.

In Australia, usually, if a player is serious about playing professionally, she will forgo college and enter professional play through lower-level tournaments. Many consider American collegiate tennis to have weaker competition than they might face if they went straight into professional tournaments. Macdonald, head coach Aleke Tsoubanos and the rest of the Vanderbilt coaching staff knew that they would have to stand out as a program in order to lure such a promising recruit across the Pacific.

Macdonald made sure Sharma knew that Vanderbilt was interested.

“I kept in touch with Astra and kept emailing her,” said Macdonald. “She decided to take the plunge and come over.”

Even with competing offers from other schools and opportunities in Australia, Sharma decided on Vanderbilt.

“I chose Vandy because the academics were amazing,” Sharma said. “But the most important thing for me was the coaching staff. I wanted to make sure that I was with coaches that would be able to develop me and make me a better player. That’s what I found with Geoff and Aleke.”

But when Sharma arrived in Nashville, her first year of collegiate tennis did not go as planned. She suffered an injury to her hand and wrist that kept her out of most of the matches and led her to redshirt her first season.

It was when she was injured, however, that Macdonald noticed something exceptional about Sharma.

“You learn a lot about a player when they’re hurt,” Macdonald said. “Some disappear—they come to practice a little bit, and then they just go study. Astra, you could see, was learning by watching.”

“All of a sudden, she was setting up cameras before matches. I would send her a YouTube video of a tactic, and she would have gone over it and analyzed it. And we would talk about it the next day. We worked on mental stuff, and sometimes we would just have lunch and get to know each other better. When you’re coaching, that’s a gift.”

After recovering from injury, Sharma made an immediate impact in her redshirt freshman season. The Vanderbilt Women’s Tennis team had struggled against bigger schools like Florida, Georgia and Alabama in conference tournaments in the past, but all of that changed with a healthy Sharma on the court.

In 2015, after the regular season, Sharma and the Commodores began play in the SEC tournament to determine the conference champion. First, they beat Alabama, whom they had barely beaten not even 90 days before. Then, they beat Florida–a top-two team in the nation. In their last match of the tournament, they upset Georgia to win the first-ever conference title for Vanderbilt.

“That was kind of the first taste of victory that the team I was on ever had,” said Sharma. “We had believed it was out of reach—you had such good teams like Florida and Georgia in the conference. It seemed like such a big hurdle, but once we got over that, it was like this turning point where we were like, ‘Oh my gosh, we’re good enough. And we can do this.’”

“It was a little surreal,” Sharma said.

The team did keep winning, and not just in the SEC. In the 2015 postseason, Vanderbilt beat Florida for a third time (before Sharma, Vanderbilt’s all-time record against Florida was 2-45) to advance to the Final Four. Behind Sharma’s outstanding singles performances, Vanderbilt bested the top-ranked USC Trojans and then the UCLA Bruins to earn the Commodores their first NCAA title in women’s tennis.

“It was so exciting to beat all of these really good teams—it was unbelievable.” Sharma said.

Although the team didn’t win another NCAA Championship with Sharma, they had incredible success in SEC tournaments and deep postseason runs. During the team’s mesmerizing turnaround, Sharma developed a lasting bond with Macdonald and Tsoubanos—so much so that Sharma stayed for her senior season at Vanderbilt when she could have graduated and gone on tour full time.

“It was tough,” said Sharma, about deciding whether or not to stay. “I felt like I needed that match play, and I needed that guidance from Geoff, keeping in mind that I wanted to play at that next level.”

After her senior season, Sharma, a Medicine, Health, and Society major, put medical school on hold and began to play full-time professional tennis on tour.

Sharma has had incredible success on tour, and her rise up the WTA rankings has been nothing short of astounding. In just three years, her singles ranking skyrocketed from #976 in 2016 to a high of #85 in 2019. She has played in all four majors, and in 2019, she advanced to the finals of her home major, the Australian Open, in Mixed Doubles with her partner John-Patrick Smith.

“Playing in front of a home crowd, playing at Rod Laver Arena, that was all extremely, extremely cool,” Sharma said. “Playing with JP [Smith], he was a great partner to have. He’s just so calm and centered–he just made me feel like we were having fun. I remember being so scared and nervous before, but also awestruck by the magnitude of everything.”

More recently, Sharma also topped the #61 player in the world, Anna Blinkova, in the French Open before exiting in the second round.

Even while traveling around the world on tour, Sharma still makes time to return to Nashville and train. In between tournaments, she often returns to Vanderbilt’s Currey Tennis center to work with Coach Macdonald and Coach Tsoubanos.

“She and I work really well together,” Macdonald said. “A lot of what goes on in the tour is brutal, psychologically, that you’ve got to get the person to understand how to be really resilient. It’s very process-oriented—if it’s just win-lose, zero-sum—you’re going to hit the wall hard at some point.”

Sharma doesn’t only train herself in Nashville; she helps the current Women’s team get even better.

“She’s great with the team,” said Macdonald. “The thing about Astra is that her character’s unbelievable. She’ll come to a tournament or a match as a proud alum and really encourage the young players. I think she’s just a great role model.”

Nashville has become a home away from home for Astra Sharma (who always makes a pit stop at Hattie B’s whenever she returns). With the support of the Vanderbilt coaching staff and athletic trainers, Sharma will continue her climb up the ladder of professional tennis at the Mercer Tennis Classic in Macon, Georgia this week.

While at Vanderbilt, Astra Sharma blazed a trail that completely transformed the women’s tennis program and brought Vanderbilt its third NCAA title in any team sport. Her impact is still felt by the team today, and she continues to guide the players even while on tour.

In an era of uncertainty, one thing is for sure–Vanderbilt tennis will never be the same, thanks to Astra Sharma.