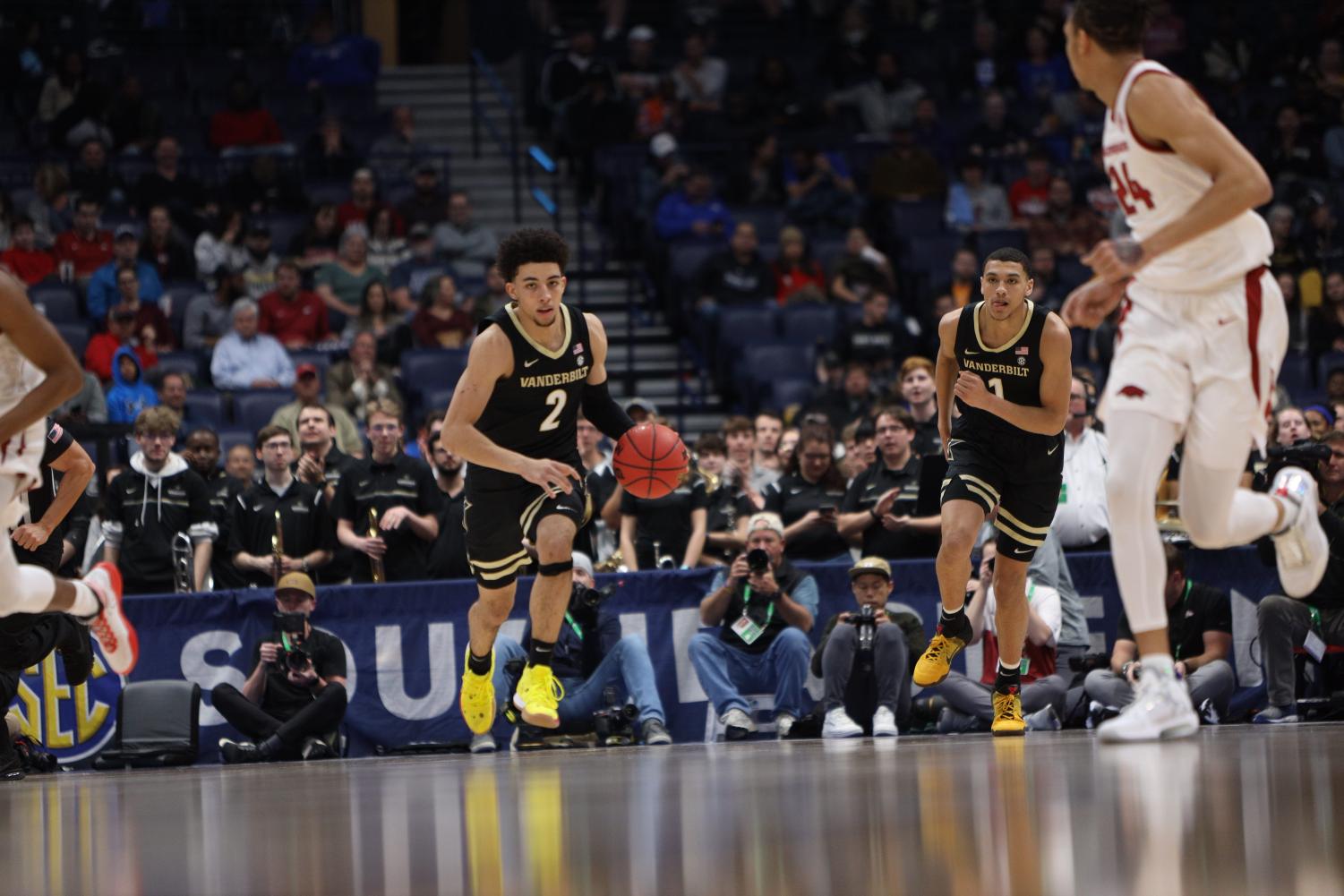 Scotty Pippen Jr. (2) pushes the ball up the court as Dylan Disu (1) trails in Vanderbilt’s loss to Arkansas. (Hunter Long )

Scotty Pippen Jr. (2) pushes the ball up the court as Dylan Disu (1) trails in Vanderbilt’s loss to Arkansas.

Vanderbilt shot just 6-25 from the field in the first half and was unable to recover from the slow start.

The Commodores came into their tournament matchup against Arkansas as winners of two consecutive games and riding a wave of momentum. During the past few weeks especially, Vanderbilt’s level of play has steadily grown with each game, as has the team’s confidence level. While the improvement over the course of the season is evident, last night’s 86-73 loss was a reminder of how far this team still has to go.

Scotty Pippen Jr. kicked off the game with a three at the top of the arc, but, from that point on, it was all Razorbacks. When Isaiah Joe sank a three pointer at the 6:13 mark in the first half, Vanderbilt trailed 25-9 and had gone over nine minutes without a field goal. The team fought back and eventually found an offensive rhythm in the second half thanks in large part to a 30 point effort from Saben Lee. The slow start, however, was too much to overcome and the game was never truly competitive.

The team appeared tentative right from tipoff. They were not driving hard to the basket and committing several unforced turnovers, a sign of a young team. On the defensive side, Vanderbilt lost track of Mason Jones and Desi Sills consistently. The pair finished with a combined 42 points and seven threes.

Coach Jerry Stackhouse attributed some of these first half struggles to the amount of youth and inexperience on his team.

“Sometimes we forget, [it was] a lot of these guys’ first experience of playing in a big tournament like this,” he said. “For the most part, I thought we handled it better as the game went on. We didn’t handle it very well from the very beginning. We were in the wrong places doing some things out of character. Sometimes I think the moment got the most of us today.”

As much as inexperience plagued Vanderbilt in its loss, so too did its lack of size and athleticism on the wings. After Clevon Brown’s season ending knee injury, the Commodores could never find a permanent solution at the center position and it hurt them in numerous games, including the SEC Tournament one.

Arkansas’ Ethan Henderson and Reggie Chaney blocked and deterred the Commodore guards’ shots at the rim all night. Freshman forward Dylan Disu started the game at center and spent a majority of his playing time there as well. While Disu is a solid rebounder and rim protector, he is not able to guard centers one-on-one in the post. To compensate for this, Stackhouse employed a lot of zone and traps throughout the game which caused some disruption but also allowed for frequent easy dunks and layups for Arkansas.

The good news for Commodore fans is that neither of these problems should be as magnified next season.

Freshmen Scotty Pippen Jr. and Dylan Disu both started all but one game this season and each averaged at least 27 minutes a game. Jordan Wright and Bralee Albert both averaged double digit minutes as freshman as well.

While each experienced their own types of growing pain as freshmen, all four became major contributors and staples of the rotation during the last few weeks of the season where Vanderbilt was playing its best. Most importantly, however, they gained invaluable experience in high-stakes SEC games that will serve them and the program well in the future.

“Well, I think our [freshmen] had real valuable reps this year, in practice and in games,” Stackhouse said. “They were able to make mistakes and play through their mistakes. I don’t know going forward, the young guys coming in as a group will have that opportunity because we’re going to be an older group that really understands how we want to play and how we want to do things.”

Even Maxwell Evans, as a junior, gained some much needed experience this season. Evans had a very limited role in his first two seasons, mostly as a defensive role player off the bench. This year, however, he became a regular starter and a real offensive threat, even pouring in 31 points and seven threes in Vanderbilt’s upset of LSU. Having a senior guard who contributes on both sides of the ball will be critical next season.

The Commodores will get some assistance in the post from Rice transfer Quentin Millora Brown who will be eligible next season. Millora-Brown is 6’10’ and shot 59.8 percent from the field in his freshman campaign.

“Just his ability to give us more of a post presence, not just to create his own, but be a facilitator in the post, that’s something we didn’t have all year this year,” Stackhouse said of Millora-Brown.

Clevon Brown returning is also a possibility. The senior is eligible to apply for a medical redshirt after playing in just nine games this season. Brown averaged nine points, six rebounds and two blocks before he suffered a season ending knee injury. The Commodores will also get some much needed experience and guard depth with the eligibility of transfer DJ Harvey who averaged 10.8 points per game in his sophomore season at Notre Dame.

The biggest deciding factor of next season, however, hinges on Saben Lee’s NBA decision. Thanks to multiple phenomenal performances late in the season, Lee has garnered some NBA draft buzz. Aaron Nesmith is pretty close to a forgone conclusion to leave early for the draft, but Lee could go either way.

Lee’s always had incredible speed and athleticism but this season his play reached new heights as the game seemingly slowed down for him. He started the season in the sixth man role but, due to injuries, was eventually thrust back into the starting lineup and asked to carry the majority of the scoring load.

“When Aaron went down, Clevon went down, we needed [Lee] to be more of a primary scorer for us,” Stackhouse said. “He stepped up and did that. My hat goes off to the kid. Over the last two years, probably nobody had more things change during the course of a season than he did for him. Every time he stepped up and responded. He’s a real coachable kid, a real likeable kid.”

Once Lee settled into his new role, he thrived. He scored 30 or more points in three of his final six games and dropped 38 and 33 respectively in Vanderbilt’s victories over Alabama and LSU.

It didn’t come immediately, but Lee has shown this season that he can be the best player on a solid team. If he returns, Stackhouse will have plenty of options to plug into lineups next season, a luxury he would welcome after the lack of depth due to injuries of this season.

“I think next year I’m going to have a lot of little toys in my toy chest,” Stackhouse said. “I can’t wait to play with them. It’s exciting to see the possibility of who we could be and having a few more options next year.”