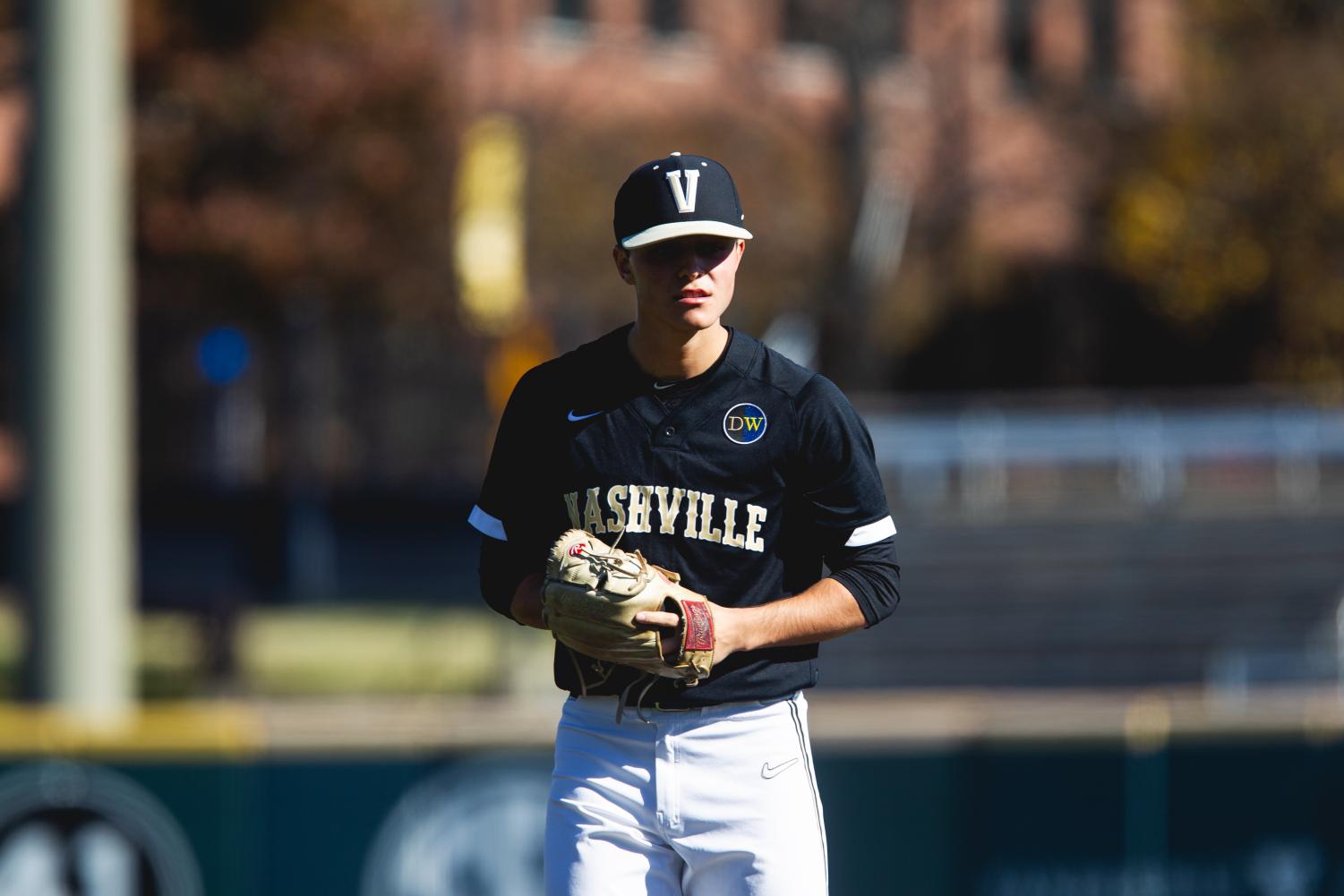 Jack Leiter pitches from the windup in Vanderbilt’s 3-2 loss to Michigan in the two teams’ fall scrimmage. (Hunter Long)

Jack Leiter pitches from the windup in Vanderbilt’s 3-2 loss to Michigan in the two teams’ fall scrimmage.

Like Father, Unlike Son: Jack Leiter feels right at home in Nashville

Freshman pitcher with a major-league pedigree blazes his own trail.

There are plenty of similarities between Freshman Jack Leiter and his father, two-time MLB All-Star Al Leiter. For starters, they’re both pitchers. Although the younger Leiter saw a lot of time in the infield before he hit his growth spurt, Jack always continued to practice pitching with vigilance. When he first started high school, Jack had his work cut out for him. He was undersized, lacking the height his father had, and he didn’t have the velocity necessary to establish himself as a legitimate major league prospect. Over the course of his high school career, however, those things changed.

Both Leiters were drafted by the New York Yankees after their senior season of high school ball. Al was selected in the second round of the 1984 draft, while Jack was taken in the 20th round in 2019.

However, the one key distinction that has launched Jack’s baseball journey in a wildly different direction than his father’s: His decision to spur MLB offers upwards of $4 million in order to begin his college baseball career at Vanderbilt.

In early June, after he was drafted on Day Three by the New York Yankees, it appeared as if Leiter had a decision to make. One of his options was to join Tim Corbin and the Commodores in Nashville. His other option? To don pinstripes and become the newest member of the most successful professional sports franchise in the country. For Leiter, however, making the trip south was never in question. A few days after the draft, the elder Leiter tweeted the following:

My son @jackleiter22 never wavered…he always wanted to go to Vanderbilt. His commitment to @VandyBoys was rock solid. I’m proud how he was so resolute & convicted with his choice and decision-making . When there’s a fork in the road take it…he chose @VanderbiltU #ProudDad https://t.co/d44WoNzi4D

MLB teams knew that it would be a Herculean task to wrestle Leiter away from his verbal commitment to Vanderbilt. He was adamant that he wanted to go to college, despite the lucrative offers that were being thrown at him.

“Academics were always big, especially in my family,”Leiter said. “My Dad, he chose the other route, he went straight out of high school. It mattered more to get paid as soon as he possibly could. Honestly, I was just excited to get to school.”

For Leiter, Vanderbilt has been everything he ever hoped for—and then some.

“It’s everything I thought it would be. Obviously the school part is no joke, but my high school prepared me for that, and the baseball part’s just awesome,” Leiter said.

And, as easy as it was for him to turn down multimillion-dollar offers to play in the majors, the decision to become a Commodore was even easier.

“It was always a dream to come to Vanderbilt, especially after 2014, 2015,”  Leiter said. “Obviously (there were) big-league guys coming out of Vanderbilt, and I definitely wanted to go to a school that maybe I couldn’t get into academically if it weren’t for baseball.”

Vanderbilt fans won’t have to wait long for the first-year pitcher to begin making an impact on the bump. In pre-season training, Leiter has already made a name for himself, earning the respect of both the upperclassmen and Vanderbilt baseball head coach Tim Corbin.

“They handle themselves well when they pitch, and they work relatively quick,” Corbin said when referring to Leiter and the freshman pitching staff in general. “They get the ball, get on the mound, and they pitch. They keep it simple.”

When asked about what it was like to practice against one of the best pitching staffs in the nation on a daily basis, junior outfielder Cooper Davis expressed appreciation for the challenge posed by talented pitchers like Leiter.

“It’s why you come to Vanderbilt. Getting to face these guys. Even these freshmen, Jack and a couple of other guys, (they) are some good arms, so it’s really good for us hitters to face them,” Davis said.

“Jack’s been a tough at-bat,” Davis said in a warning for the rest of the hitters in the SEC.

Although he didn’t see action during the MLB4 tournament, Leiter has indicated that he has no problems learning from his teammates and honing his own personal craft. He’s been training hard in preparation for the season, even though his role on the team for this year is still up in the air.

“There have been a few mechanical adjustments, with my back leg and my glove side. In terms of command, that can always improve. Secondary pitches, working on my changeup,” Leiter said of his off-season improvements. “It’s just about getting better. I think it’s been more of a team mindset so far. I’m just excited to play with the guys and hopefully get opportunities to play out there. And, if not, root them on.”

Humility is one of Leiter’s most admirable character traits, and it’s a desirable quality that coaches, scouts and teams look for in any young ballplayer. Despite his impressive pedigree and formidable track record, topping out at No. 22 on Baseball America’s 2019 pre-draft board and No. 33 on MLB Pipeline, Leiter doesn’t expect any special treatment in the slightest.

“All rankings kind of go out the door once you get here. Everyone is obviously treated equally, like they should be,” Leiter said. “If you’re doing well, you’re going to get treated like it, and if not, you probably won’t. And I think that’s the way it should be.”

After Mason Hickman, Kumar Rocker and Jake Eder got the starts for the Commodores this past weekend in Arizona, Leiter will likely take the bump for the first time in Vanderbilt’s home-opener against South Alabama. But a spot in the weekend rotation at some point this season isn’t out of the question.

Eder, who twirled a masterful three-inning save during last year’s title run, will make the leap from the bullpen and will begin the competition with Leiter for a spot in the weekend rotation come conference play.

“All I can do is improve every day, from start to start. However that shakes out, it shakes out,” Eder said.

For Leiter, no matter how the Sunday starter ends up being determined, he’s simply grateful to be at Vanderbilt—pitching at his dream school, in one of his favorite cities, for one of the best collegiate baseball teams in the country.

“Whatever my role may be,I’m excited for it,” Leiter said.