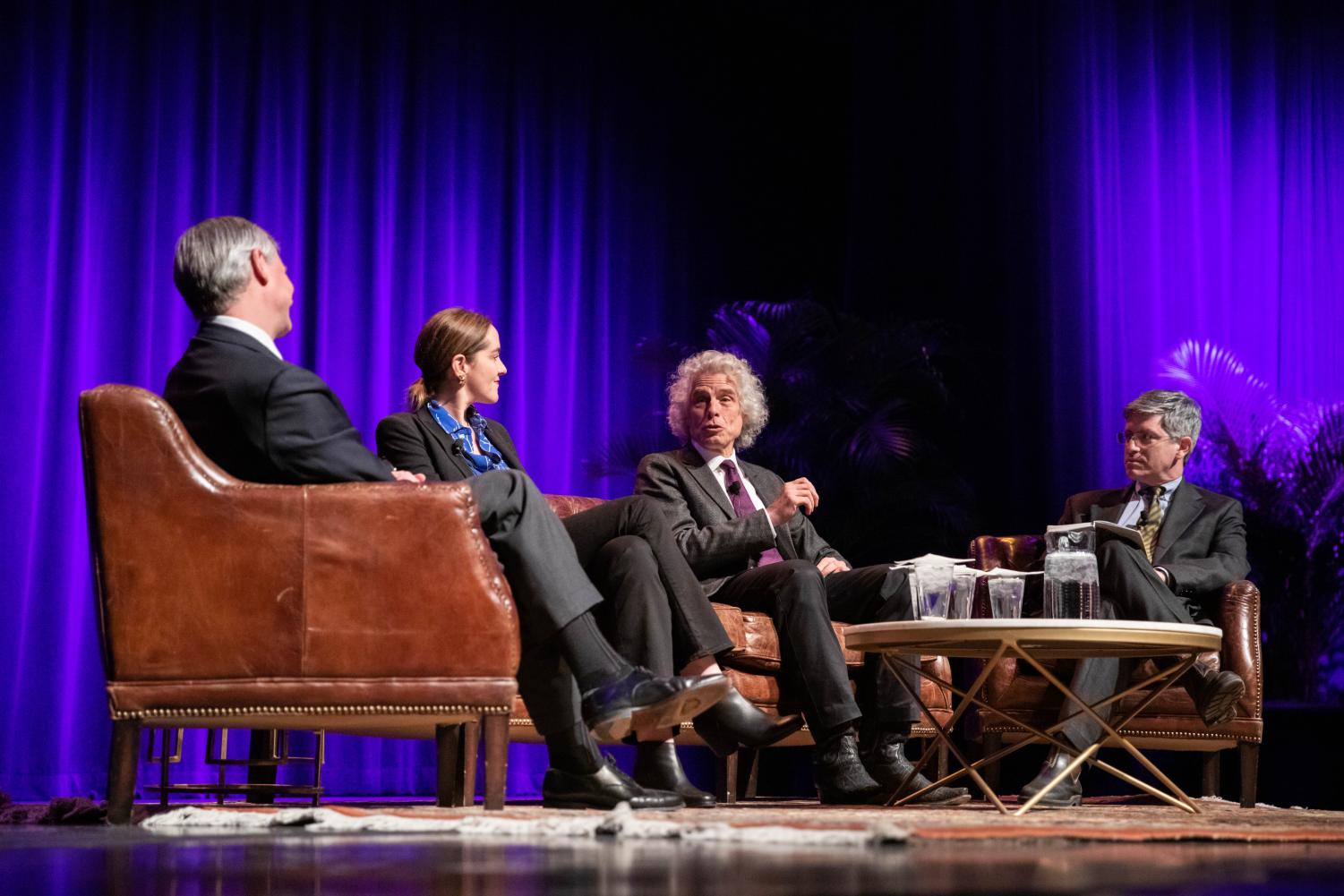 The Hustler met with all three speakers of the Dec. 3 Chancellor Lecture Series event

The Hustler sat down with psychologist Steven Pinker, science writer Carl Zimmer and Vanderbilt writer-in-residence and journalist Amanda Little, the three speakers headlining the Chancellor’s Lecture Series event Dec. 3 The lecture, titled “2020 and Beyond: Tackling Global Issues in the Decades to Come” and moderated by political science professor Jon Meacham, featured a conversation on global challenges like misinformation, climate change and global health.

Pinker is a psychology professor at Harvard University and author of eight books, most recently Enlightenment Now: The Case for Reason, Science, Humanism, and Progress, which Bill Gates called his “new favorite book of all-time.” Pinker was named to the Time 100 Most Influential People list in 2004, and is noted for his scholarship in language, cognition and human progress.

Zimmer is a writer for The New York Times since 2004 whose weekly column, Matter, covers scientific developments, especially in biology. The latest of his 13 books, titled She Has Her Mother’s Laugh: The Power, Perversions, and Potential of Heredity, is considered “one of the best books ever written about genetics” by Science Friday.

Little is a journalist and writer-in-residence and professor in the English department at Vanderbilt. Her writing includes interviews across a dozen countries pertaining to agriculture and climate change, and won her the Jane Bagley Lehman Award for excellence in environmental journalism.

Vanderbilt Hustler (VH): What inspired each of you to engage with the big issues you do?

Carl Zimmer (CZ): I began as a science writer at Discover and there I was focused on writing about basic science, fundamental questions that scientists ask because they’re curious. One of the things they’d be curious about is, for example, how does the climate change as the atmosphere changes? In the 90s, there were still a lot of open questions about that. I’ve seen more of a connection between the basic science that I’ve learned to do as a journalist and trying to think forward about these challenges. We need to understand that and take that into account for our future wellbeing.

Amanda Little (AL): I got my start as a tech writer because there was a lot going on in the world of tech and IT. I moved from technology into energy and the environment and eventually into agriculture because I started chasing what I thought were more important stories. I found they were important stories that needed to be told that had what stories need, which is tension. Bring tension, bring exciting stories. I was chasing the excitement.

Steven Pinker (SP): I’m interested in human nature, what makes people tick. I’ve always been intrigued by the tension between acknowledging human nature with all its flaws and that human progress is an undeniable phenomenon. One of the things that evolution did give us is the ability to combine ideas to come up with new solutions to problems, to share ideas with language. I think that is a major source of our capacity for progress.

VH: What steps did you take to occupy a platform that advocates for global change, and what do you recommend for others like college students who hope to do the same?

CZ: In college I was an English major with a vague idea that I wanted to be some kind of a writer, so I started interning at a local newspaper. Eventually I was very fortunate to get a job at Discover magazine. For me, that’s where I really learned how to be a science writer. Look at how people are getting their news, what technologies they’re using, what technologies they’ll use next year.  Try to look for ways to build a sustainable life for yourself in a very unstable industry.

AL: Hurl yourself into experience. My early reporting was on offshore oil rigs, climbing inside electricity rigs and, for my recent book, flying into a monsoon cloud. Basically everything my parents told me not to do to get a good story. In 2003, I did the first Rolling Stone interview with Barack Obama. In the middle of it, I asked “How did you share one million votes with George Bush?” He said, “Because I do what you do — I tell stories, and I’m a damn good storyteller. Stories are the engines of politics, the engine of business, they are what bring science alive. Storytelling is everything. It is the most important currency of our time. Keep telling stories.” I kept hurling myself into situations that provided fodder for good stories.

SP: Don’t restrict yourself to an academic discipline. Take courses across the curriculum in what you’re interested in. Take advantage of the fact that, in a university, you can take hard subjects and be forced to study and take exams, because it won’t happen ever again.

Be aware of how the human mind is all too susceptible to stories when they’re statistically unrepresented. We know the human mind loves images, stories, anecdotes, and we can be misled as to what our nation’s priorities are if we are led too much by stories. Be aware of limitations of our own minds.

VH: If your son, daughter, or grandchild asked you about climate change or another global challenge, what would you tell them?

AL: Ingenuity got us into this mess, ingenuity can get us out of this mess. This is a problem that has resulted from human enterprise and ambition gone wrong, but a lot of it has gone right. It’s an opportunity for their generation to engage, problem-solve, mitigate and adapt. It is not just the biggest threat but probably the biggest job creation engine of their time.

Energy is good. Energy is what lifted us out of poverty, it’s what is going to be demanded by the rest of the world, especially in Asia and Africa to lift them out of poverty. The solution to climate change won’t be to renounce the use of energy but to make it clean and cheap, such that people will opt for it in their own interest.

VH: In a word or phrase, what aspect of humanity’s future excites you the most?

SP: Sustainable development goals. The fact that progress will consist not just in allowing Westerners to live to 100, but allowing people in Africa and Asia to live to 85. That’s a goal, it’s an attainable goal, and it’s an exciting goal, to eliminate poverty and infectious disease.