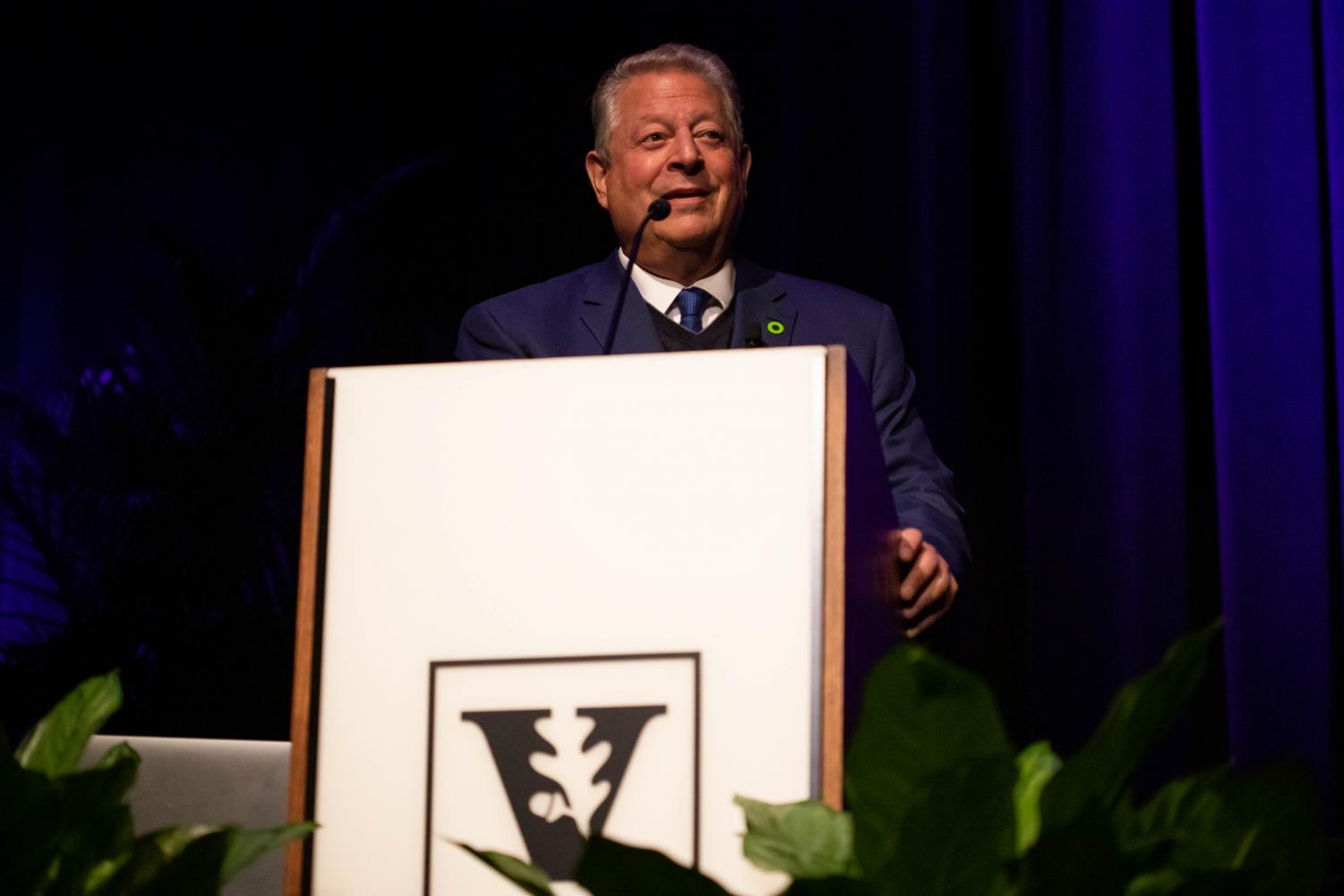 Gore and The Climate Reality Project, a non-profit he founded in 2006 dedicated to catalyzing a global solution to the climate crisis, are spearheading the “24 Hours” campaign. Gore’s presentation was one of 1,720 others held globally to answer three overarching questions regarding climate change: Must we change? Can we change? Will we change?

Gore has written multiple best selling books addressing climate change, the most famous being “An Inconvenient Truth,” which was adapted as an Oscar award-winning documentary in 2006.

Musician and climate activist Jaden Smith joined Gore on stage before the lecture to share his personal journey delving into climate change. Though he found strong teachers who educated him about the dangers of microplastics and greenhouse gases and the promises of solutions like regenerative agriculture, the single thing that changed his life the most was “An Inconvenient Truth,” he said.

“For me, for my generation, for all generations that are going to have to go forth into the world dealing with the climate crisis, I’m so glad that we have an icon here that we can look up to, someone to guide us and to educate us on the real problems and the real ways that we can bring long lasting change to the world,” Smith said.

The Vanderbilt Hustler was able to sit down with Gore in a media roundtable prior to his lecture to ask the former Vice President a few questions about his role in climate change advocacy and what Vanderbilt can do to further our mission of sustainability.

The Vanderbilt Hustler: I know that the Climate Reality Project has people all over the country and world leading these lectures today, but I was wondering what brings you specifically to Vanderbilt today?

Vice President Al Gore: Well, it’s the Climate Reality Project, and just a little bit of background, this is an organization that I founded here in Tennessee back in 2006. I had the first of all these trainings at my farm in Smith County. I had the second one here in Nashville for a large group, and I’ve trained about 20,000 people personally around the world. The reason for it is to have women and men who are knowledgeable about the facts of the climate crisis, what’s been causing it, what the impacts are and more importantly, what the solutions are, and then we train them with the skills in advocacy and communication to reach out to their elected officials at the local, state and federal level. They’re all over the world now, and there is hardly any political meeting that takes place in this country now without at least some of these people buttonholing the candidates or elected officials, saying, “What about climate? What are you going to do? How can we move faster on this?” That’s the purpose of it.

Now today starting at 6 p.m. going around the clock 24 hours to 6 p.m. tomorrow, there will be presentations of an updated version of the Climate Slide Show that started back with “An Inconvenient Truth”— really before that— but this is an up-to-date version of it that would be presented in 1,700 locations all over the world in the same 24-hour period. Some of the audiences are more than a thousand people, many of them more than 500 people, some of them smaller audiences. We have presentations on coal mines, we have a presentation on the Great Barrier Reef, one in Antarctica. Presentations in all 50 states, 75 foreign countries, and the purpose is to focus more attention on why this has to be our top priority, to solve the climate crisis.

VH: Vanderbilt has taken some really impressive steps to increase our sustainability on campus, like our No More Plastic initiative in our dining halls, reducing meat consumption and constructing LEED-certified buildings. What other ideas and initiatives do you think that Vanderbilt could be putting in place to take these programs a step further and make us more sustainable?

AG: Well, I’m very impressed with what Vanderbilt has already done. And by the way, I would also like to compliment the Young Republican Club here at Vanderbilt for joining young Republican clubs on 56 other campuses and petitioning the Republican National Committee to change its position on climate and start advocating solutions. So I think that in general, students around the world are way more aware and concerned than folks my age generally speaking. I think the student strike movement, younger than college students, the Extinction Rebellion, the Sunrise Movement— I think that this movement of young people is bound to grow because every night on the TV, news is like a nature hike through the Book of Revelation. You see these floods and droughts and fires and sea level rise and tropical diseases spreading and harvest being reduced and many other consequences. Young people don’t have to think too long and hard to realize that they’re going to live longer with the consequences, as the scientists predict these consequences will get a lot worse than they are now unless we really move quickly. Even if we do move quickly, we’re going to have to live with some consequences, but we have to avoid the catastrophic consequences, and a lot of universities are moving in the right direction. Vanderbilt is certainly a leader in this movement. There’s always more that can be done. But I’ll take that up with the Chancellor.

VH: We’ve seen the effects of climate change get worse. We’ve been calling for politicians to make it more of a campaign issue, and it seems like not much has changed in the past 10 or so years. So for something like a price on carbon or other policies that have been floating around for so long, how can we break through and either have our government leaders enact these policies or make it an issue to really truly vote on?

AG: Well, I actually think that that we have seen a significant change just in the last couple of years. Sixty-seven percent of registered Republican voters in the millennial generation are saying we’ve got to get on and solve the climate crisis. Overall, 78 percent of the American people are saying that and 60 percent of Republicans overall in the US, so the big carbon polluters have used their campaign contributions and lobbying money and the revolving door type of corruption to capture policy. They scare some of these members of Congress and other elected officials by telling them if you don’t do what we want, we’re going to withdraw our campaign support and we’re going to finance a primary challenge to you and they get scared and feel like they have to say how high when they them to jump and that is beginning to change.

You know last year, when the election returns came in, there was so much focus on the Senate not changing hands— of course, only one-third of the Senate is up every two years— that a lot of people missed the significance of what happened in the races for the House of Representatives. Last year was actually the largest wave election in all of American History. It was a massive change, and the preliminary numbers are leading some analysts to predict the same thing’s going to happen this year. We’re now getting some Republican candidates who are saying, wait a minute, we’ve got to change. Now, I know President Trump’s challengers— there’s no effective Republican primary for president— but there are a few, and the ones getting in are challenging him on this. In local and state races, you’re getting a lot more of that. There’s now a growing caucus in Congress that includes a growing number of Republicans— far from a majority, I’m understanding that— but they’re hearing from the voters, and this is the way democracy is supposed to work.

The Vanderbilt Hustler welcomes and encourages readers to engage with content and express opinions through the comment sections on our website and social media platforms. The Hustler reserves the right to remove comments that contain vulgarity, hate speech, personal attacks or that appear to be spam, commercial promotion or impersonation. The comment sections are moderated by our Editor-in-Chief, Rachael Perrotta, and our Social Media Director, Chloe Postlewaite. You can reach them at [email protected] and [email protected]
All The Vanderbilt Hustler picks Reader picks Sort: Newest
Subscribe
Login
1 Comment
Newest
Oldest Most Voted
Inline Feedbacks
View all comments
A
Arbie

Gore is full of misinformation including this, “ Last year was actually the largest wave election in all of American History.“ Obama lost more seats in 2010.