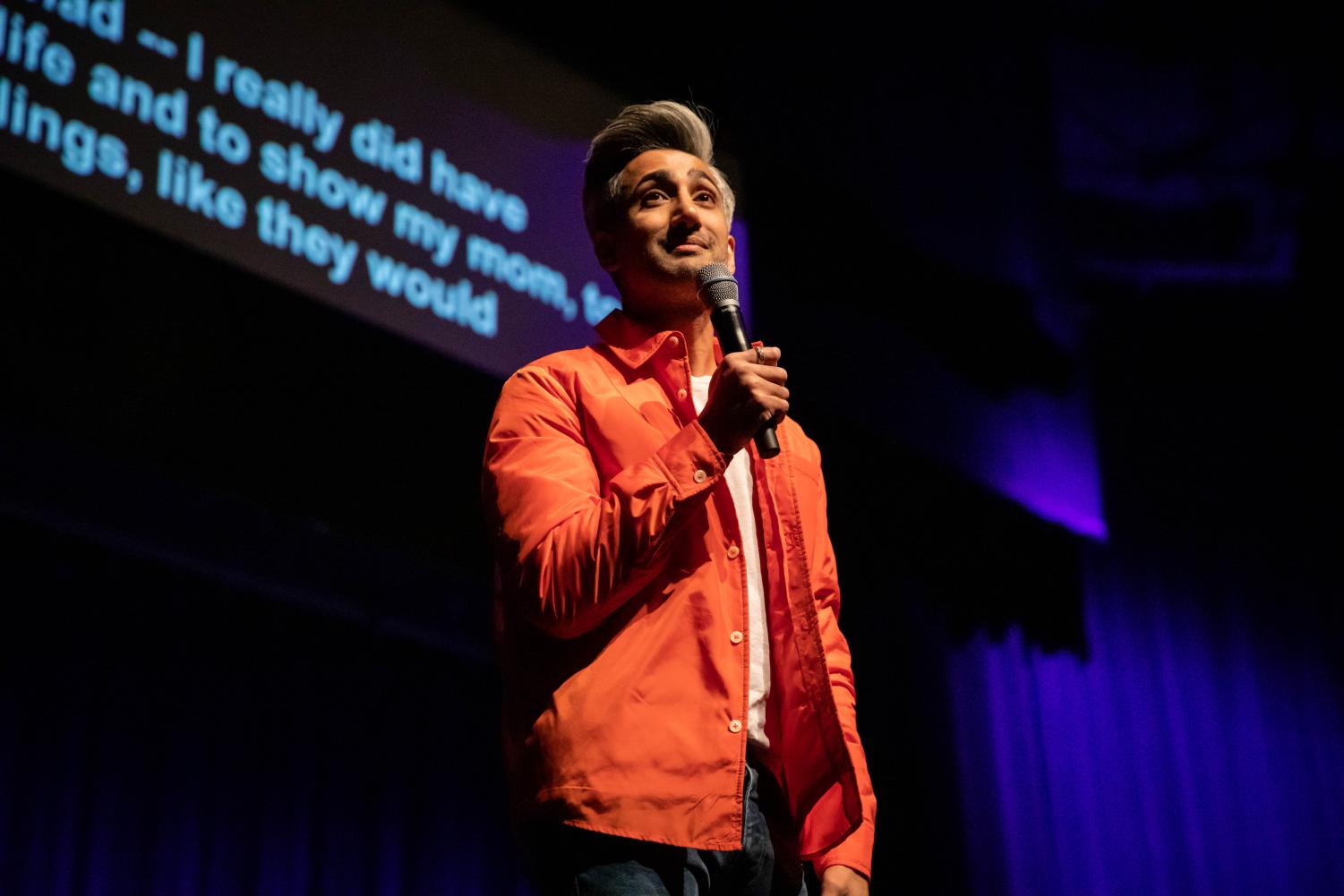 ‘Queer Eye’ star and fashion designer Tan France discusses race and sexuality, representation and how to create your own path in life

Vanderbilt Programming Board hosted Tan France, the “Queer Eye” wardrobe wiz and fashion designer, Nov. 19 in Langford Auditorium. France discussed everything from his childhood being a part of a Pakistani immigrant family in a small town in Northern England to how he established himself in the fashion industry to finding friends and mass acceptance with the “Fab 5.”

France is best known for his role on “Queer Eye,” the popular Netflix original out to make-over the world one person at a time. Apart from this, he has worked behind the scenes for brands like Kingdom and State and Rachel Parcell,  starred in his own Netflix social series “Dressing Funny” and toured internationally for his best-selling memoir “Naturally Tan.”

The discussion, moderated by senior Zach Buchta, immediately took on a conversational and lively tone.

“Did you all freak out about what you were going to wear tonight?” France said, greeting the audience.

France spoke in detail about how his race and sexuality was a “double whammy” while growing up in a small, mostly white neighborhood. He described how he would run to school when his brother was sick, feeling the need to walk with another family or person out of the fear of being beaten up.

“When you are in a small town in Northern England, when you are one of maybe ten immigrant families— that’s intense. Really intense,” France said. “And then you layer on ‘he’s also really into hot dudes,’ that’s a second major concern for a small, closeted community.”

As such, he talked about the need for strong allyship between the LGBTQ+ and straight communities.

“Those marginalized groups never, ever would’ve got to the place we’re in now without support from allies, the people who have more opportunity than we have. No, I do not need to be saved by a people, I don’t need a straight hero, a hero who’s a person of a different color. I’m not saying that,” France said. “I’m saying we need people to work with us rather than working against us.”

“Queer Eye” has been a part of his role in furthering that conversation, allowing him to hopefully help tell a story that is relevant to everyone.

The discussion then switched gears, focusing on his “cautionary tale” of how he covertly switched from studying psychology to fashion, provoking an argument with his mother and a determined promise to be her most successful child. It pushed him to work much harder and prove he wouldn’t become a disappointment, he said.

In fact, France said that because his clothing brand didn’t take off for several years, he spent a good chunk of his late twenties working sometimes 18-hour days, running his U.S. clothing business remotely at night after working his 9-to-5 job. It wasn’t until after he “retired” at age 33 that he began pursuing entertainment and auditioning for shows like “Queer Eye.”

France said that he was obsessed with American TV growing up but never saw people that looked like him depicted in shows and movies. Now, he sees his purpose as showing that people like him, who may feel like outsiders within their family or community, can live happy and joyful lives. Further, France discussed the stigma around dark skin that was pervasive even within his own family— being the darkest in his immediate family, he perceived this as a barrier to his desirability and success, he said.

After receiving the role on the popular Netflix original France was nervous about the potential weight that would be given to his personal beliefs because of both his race and sexuality.

“When I was asked to be on the show, I was worried about it because there aren’t many people who look like me on western TV,” France said. “So I was panicking thinking ‘I really don’t want people thinking that I speak for all of us, that what Tan says means something to a much larger community.’”

Inspired by such experiences as feeling compelled to bleach his skin when he was only nine years old, France shared his newest Instagram project, @shaded. He launched the account Sept. 20 to bring attention to the problematic culture around the glorification of lighter skin. In particular, France said that he wants to take down companies that sell skin-bleaching products, like “Fair and Lovely.”

Between working on these passion projects and having just completed filming for the fifth season of “Queer Eye,” which is set in Philadelphia and scheduled to premiere in 2020, France also mentioned the pending release of another Netflix original he described as a global Project Runway-esque design competition. Without giving away the name, he told the audience to keep an eye out for it early next year.