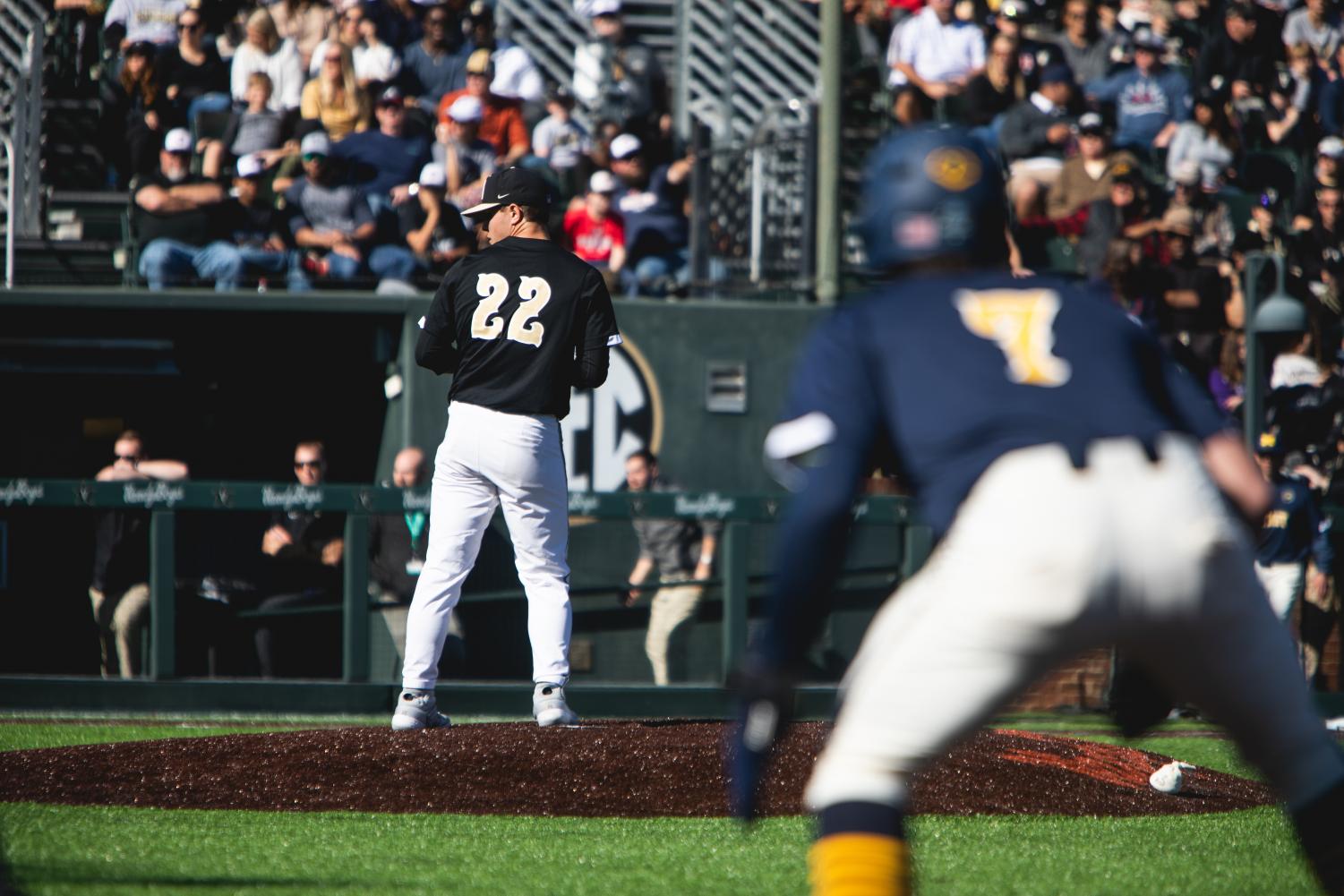 Jack Leiter pitches from the stretch in the first inning of Vanderbilt’s home exhibition with Michigan. (Hunter Long)

Jack Leiter pitches from the stretch in the first inning of Vanderbilt’s home exhibition with Michigan.

It was tough to say goodbye to the merry-go-round, explosive Commodore offense of 2019, but saying hello to this year's best-in-class pitching staff certainly made it easier

On Sunday afternoon, head coach Tim Corbin and his Vanderbilt Commodores took to Hawkins Field for their first home game of the 2020 season. While it may have just been an exhibition, this game still carried weight for the Commodores; in this rematch of the 2019 College World Series Finals, Vanderbilt sought confirmation of their national championship crown.

The Commodores were set to face the reigning national runners-up, the same Michigan Wolverine team that fell to the VandyBoys in the College World Series Finals nearly six months ago.

But that was a different Commodore team. That was the most dominant Vanderbilt baseball team in program history. It was probably the greatest Commodore team of all time, in any sport, during any era.

That team set an SEC record with 59 wins. They became the first team in SEC history to defeat all 13 conference opponents at least once in the same season. They won the SEC Championship. They won the National Championship. A whopping 13 Commodores were selected in the MLB Draft, tying an SEC record. They hit 100 home runs, leading the country and setting a single-season school record. They tallied an astronomical 541 runs batted in, good for the program’s record. And it wasn’t just the four-baggers contributing to their success, as their 770 hits also paced the country.

You get the point. That team was an offensive juggernaut. Sure, their pitching sometimes played a part, but the video game numbers at the plate are what truly defined that group.

It’s hard to tell exactly what the ceiling is for this new-look Commodore team, but in Sunday’s 3-2 loss to Michigan, they wrote the first page of Chapter 18 in Corbin’s tenure.

And that chapter is very different from the last.

“There’s a lot of kids playing where it’s their first time and they’re probably not ready, but they have to be,” Coach Corbin said. “That’s just kind of the nature of the beast.”

This team is young, inexperienced and frankly, won’t score runs at the same clip as last year’s team. But that’s quite alright.

Because they can pitch.

Four words is all it takes.

A mere four words catapults this pitching staff into the national spotlight: Kumar Rocker has returned.

Rocker enters his sophomore campaign in Nashville fresh off a historic freshman season saw him named Freshman of the Year by both D1Baseball.com and Baseball America. In his last 11 starts of the 2019 season, he went 10-1 with a 2.17 ERA, striking out 82 opponents in just 70.2 innings pitched.  In four NCAA tournament starts, Rocker was unhittable: he went 4-0 with a 0.96 ERA and kept a 44-5 strikeout-to-walk ratio. He was the Most Outstanding Player in the College World Series.

Do we even need to mention his 19 strikeout no-hitter facing elimination?

Rocker is undoubtably the ace of this pitching staff, but he’s not alone: the Commodores’ returning pitchers went 34-6 with a 3.13 ERA last season; they accounted for 61 percent of strikeouts and 58.5 percent of innings pitched. Elite arms like Tyler Brown, Mason Hickman and Jake Eder come to mind. Even without Rocker, those threee create a pool of near-unmatched returning talent.

And with Rocker? They contribute to a remarkable rotation.

Meanwhile, there’s all this hype surrounding the freshman class – most notably, talk of their dominant pitching.

On Sunday, that dominance was on full-display. It was so impressive that a few months down the line, I wouldn’t be shocked if those returning pitchers are fighting for their starting jobs.

It all began with Jack Leiter, the highest ranked prospect of the class and the son of 19-year MLB pitcher and three time World Series Champion Al Leiter. He may have suffered two earned runs in two innings pitched, but that’s not to say he underwhelmed. He followed-up on his perfect first performance (two scoreless frames, four strikeouts and just two hits allowed) in an exhibition against Oklahoma State by showing some poise on the mound. He worked his way out of an early jam – one that could’ve ended with far more than two runs across the plate – by striking out four and revealing a nasty 12-6 curveball that had opponents hacking at thin air. 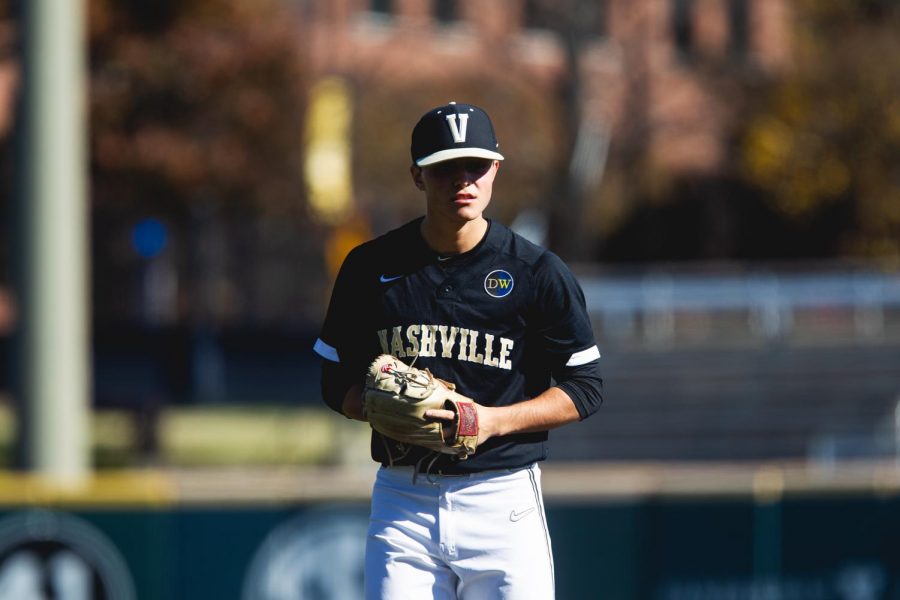 “First off, the atmosphere blew away my expectations. All these people showed up for a fall exhibition, for a game didn’t even count,” Leiter said. “But I’m not going to sugar coat my performance. Not much went well for me, and I know I’m a better pitcher than that and I’m just lucky my guys had my back.”

His guys had a combined one season of collegiate experience (thanks to Smith), and were entrusted with the burden of pitching the remaining seven frames against last year’s national runners-up.

But his guys delivered. They allowed zero earned runs (one unearned), just one hit, zero walks and struck out 12.

Ultimately, the three total runs led the Commodores to a 3-2 loss, but that shouldn’t take away from Vanderbilt’s performance on the mound.

“I thought all of [the freshmen] controlled themselves well,” Corbin said. “I thought they controlled adrenaline well. I thought the environment was perfect for what the needed right now, especially in the fall… We didn’t have a walk after the second inning. We took care of a lot of outs ourselves and we didn’t allow much to happen because it was a tight ballgame.”

Coach Corbin spoke softly. He kept his emotions internal. The answer was meticulously crafted so as to leave no room for any form of moral victory – after all, they did lose. He didn’t want them to get on their high horses. Instead, he ever-so-slightly complimented his young pitching staff.

That doesn’t quite do their performance justice. In their first home appearances, they were tasked with shutting down a powerful Michigan Wolverine offense after seeing Leiter, the top player in their class, allow two runs. There was insurmountable pressure. Frankly, it didn’t seem to bother the young arms.

Doolin, Smith, Hliboki and McElvain were spectacular in their home debuts, showing everything from 96+ mile-per-hour fastballs, to beautiful off-speed breaking balls. These are freshmen and sophomores we’re talking about, guys that may not even see the field this season, dominating a ballgame against one of the best teams in the country.

Through one home game, it seems safe to say that the 2020 season will be characterized by Vanderbilt’s über-talented pitching staff. They’ll rely on their pitchers to carry the Commodores to victory, and if they don’t get the job done, there are many more guys that will happily step in and prove their worth.