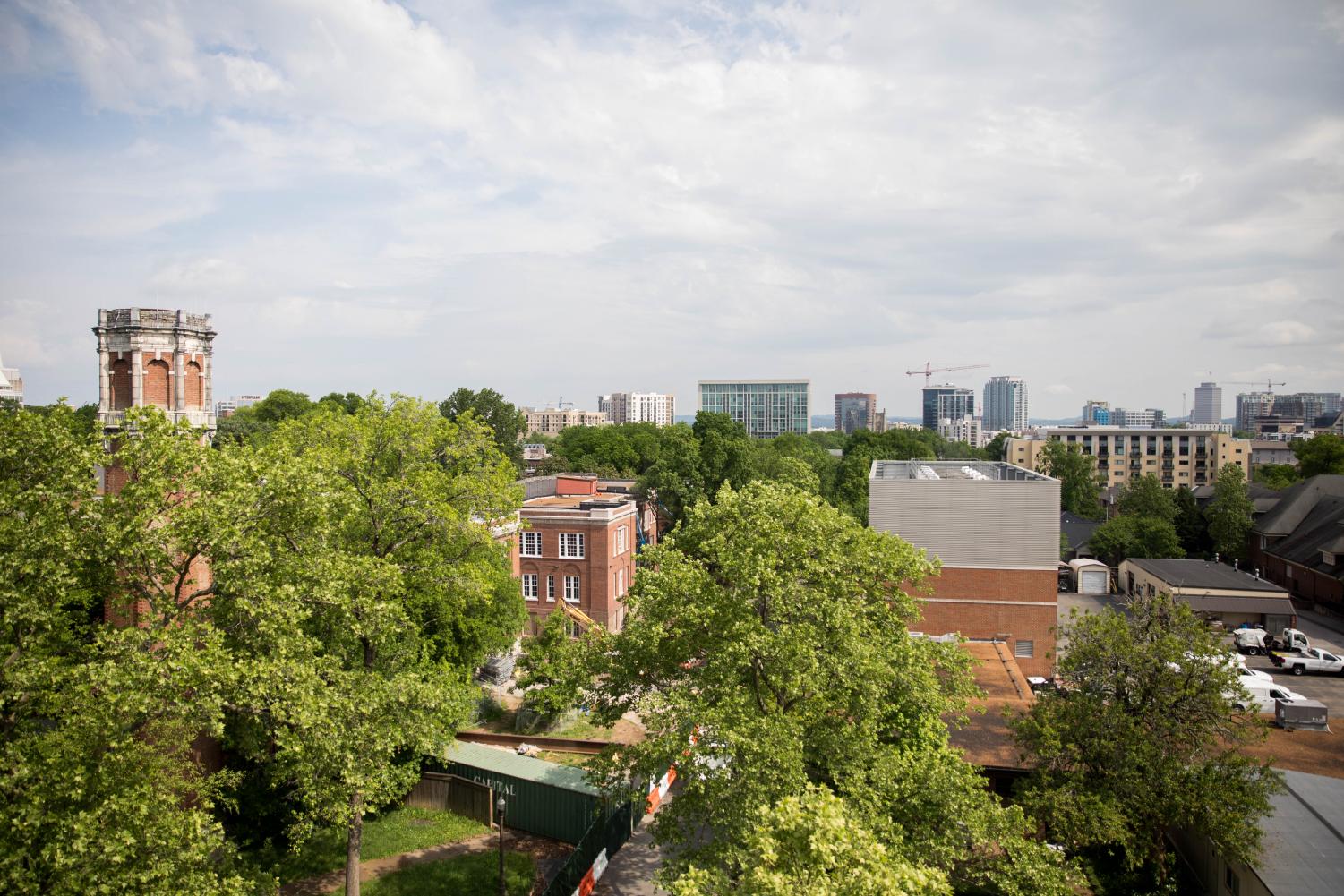 This election cycle will no longer have any in-person campaigning. (Emily Gonçalves)

TEDxVanderbiltUniversity to feature seven members of the Vanderbilt community

Vanderbilt will be hosting TEDxVanderbiltUniversity on Nov. 10 at 1:00 p.m. in Sarratt Cinema.

Organized independently of the nonprofit TED, the Vanderbilt Student Leadership Development Team operates the event in the style of a TED Conference, where speakers are given just a few minutes to share “ideas worth spreading.” The event will feature seven speakers from the Vanderbilt community discussing topics ranging from unemployment in the autism community to music in presidential elections. The Hustler spoke to each TEDx presenter about their talk and inspiration.

A licensed social worker and Vanderbilt staff member, Sarah Jordan Welch of Project Safe will be speaking about the experiences of sexual assault survivors in her talk “Welcome to the Trauma Club.”

“Most people, whether they know it or not, know somebody who’s been impacted by sexual violence,” Welch said, “and I think that sometimes the narratives that get shared are of very specific perspectives or particular identities. My intention with the talk is to have anyone who is coming to it who is a survivor have at least one moment of resonance, or one moment of feeling like they can relate to something that I’ve said.”

As a survivor of sexual assault, one of the challenges Welch faces daily in her job is how to support the survivors she works with while also taking care of herself. In choosing to give a TED talk, Welch decided that despite the difficult content, it was worth speaking out because of the possibility of helping others.

“If my talk gets to some random person in Wyoming who feels a connection, that’s kind of amazing that there’s somebody who I’ve never met, who likely I will never meet, that feels like their story has been highlighted or that they have value and worth and are important,” Welch said.

Project Safe staff and resources will be available at the TED event.

If my talk gets to some random person in Wyoming who feels a connection, that’s kind of amazing that there’s somebody who I’ve never met, who likely I will never meet, that feels like their story has been highlighted or that they have value and worth and are important.”

Vanderbilt graduate Claire Barnett (’19) is the Communications Coordinator for the Frist Center for Autism and Innovation, a Vanderbilt initiative. Barnett is also the former Multimedia Director of The Hustler. Barnett’s TED talk, “Why autistic unemployment is so high — and what we can do about it” is about the unemployment of autistic people and the valuable, unique skills individuals with autism can offer to an employer. Part of Barnett’s work is self-advocacy as an autistic adult. In doing this, she said, “I’ve seen it open people’s minds a little bit to think about neurodiversity differently.”

“There’s a very specific set of challenges that a lot of autistic people face as they try to get into the workforce,” Barnett said.

Working in an advocacy and research role at the Frist Center, Barnett examines how people with autism can reach their full potential at work and what management skills and resources are necessary for employers to help them do this. In her talk, she will also discuss ways to change the unemployment rate of people on the spectrum based on her own knowledge, research and what she’s learned at the Frist Center.

A Vanderbilt Ph.D. student, educator and advocate for genetic and data sovereignty, Krystal Tsosie’s experiences as an Indigenous (Diné/Navajo) geneticist and bioethicist inform her TED talk, “Our DNA is Not Our Identity.”

As a researcher and scientist, Tsosie examines women’s health through genomic studies in a North Dakota tribal community, but her experiences have led her to the conclusion that biomarkers and genetics do not definitively represent identity or what ideas of identity should be based on.

Tsosie’s talk, which considers community, identity and their definitions, argues that experiences are what shape us and determine kinship, not labels based on biological or cultural ideas.

School of Engineering and College of Arts and Science senior Kamala Varma’s talk,

“Lessons in Creativity from a Computer Artist Named Arthur,” is based on a project she did in her free time to learn more about artificial intelligence. In 952 lines of code, Varma tried to create a system that went a step beyond current AI artists.

“A lot of the existing AI systems that generate art are very focused on the visual, and so if visually it looks [like] art and it looks cool, then that’s considered a success,” Varma said. “I tried to add more meaning to the art, so have it actually make art based off of a theme, and try and get it to interpret that theme and then make art based on that theme.”

Varma said she doesn’t have a definition for art when it comes to her computer program’s products. She explained that trying to have a computer produce art is complex and judging the quality of the result can be a challenge. Instead, Varma drew inspiration in her project from her own artistic process, as well as those of Pablo Picasso and Andy Warhol.

“I’m trying to mimic the human artistic process, which I don’t think existing AI systems do, they just focus on getting the cool result,” Varma said.

Troy Jiang is a senior in the College of Arts and Science, double majoring in Mathematics and Communication of Science and Technology. Jiang’s talk “Let’s Talk About (the Potential) of Dating Apps,” will use stories and research in order to discuss both the potential and dangers surrounding dating apps, specifically Tinder and Grindr.

“Dating apps provide unprecedented opportunities for us, but there are actions that we must take to leverage their full potential,” Jiang said. “With proper management and use, we can bring out the great potential of dating apps and bring the world together”

TIME ranked Vanderbilt as the 28th most popular school for male Tinder use, with the amount of people on dating apps only increasing, Jiang said.

“Dating platforms have become a critical aspect of society. For many Vanderbilt students who are interested in the technology and social changes, dating platforms an exciting opportunity for us to learn and to potentially contribute to improving these technologies,” Jiang said.

Tommy Oswalt, a senior in the College of Arts and Science, will deliver “Why Music Matters in the 2020 U.S. Presidential Election” analyzing how presidential candidates utilize music throughout their campaigns in order to display policy, relatability, experience and “presidentiality.” By presenting President Barack Obama’s 2012 campaign playlists, Oswalt will provide the audience with “things to listen for” in the 2020 election.

Oswalt found inspiration through his parents: father as a local politician and mother as a musician.

“I found both music and politics to be integral components to my upbringing,” Oswalt said. “Every day, U.S. voters are constantly inundated with countless forms of media that attempt to make sense of both the candidates and events of the campaign.”

This talk aims to offer another lens through which people can analyze the 2020 election for themselves—the lens of campaign music.

Vanderbilt graduate Katy Friedman (‘94) is a grief therapist with a private practice in St. Louis. Friedman’s talk, “Scared to Death and Showing Up Anyway: The Heroism of Being There with Grief and Grievers,” will discuss her work in hospice and as a grief therapist and explain how those occupations have given her invaluable experience being with grieving people.

“I notice other people seem to be afraid of this. I am too, but my work is to practice showing up when I am afraid or feel inadequate. I want to encourage other people to do the same,” Friedman said.