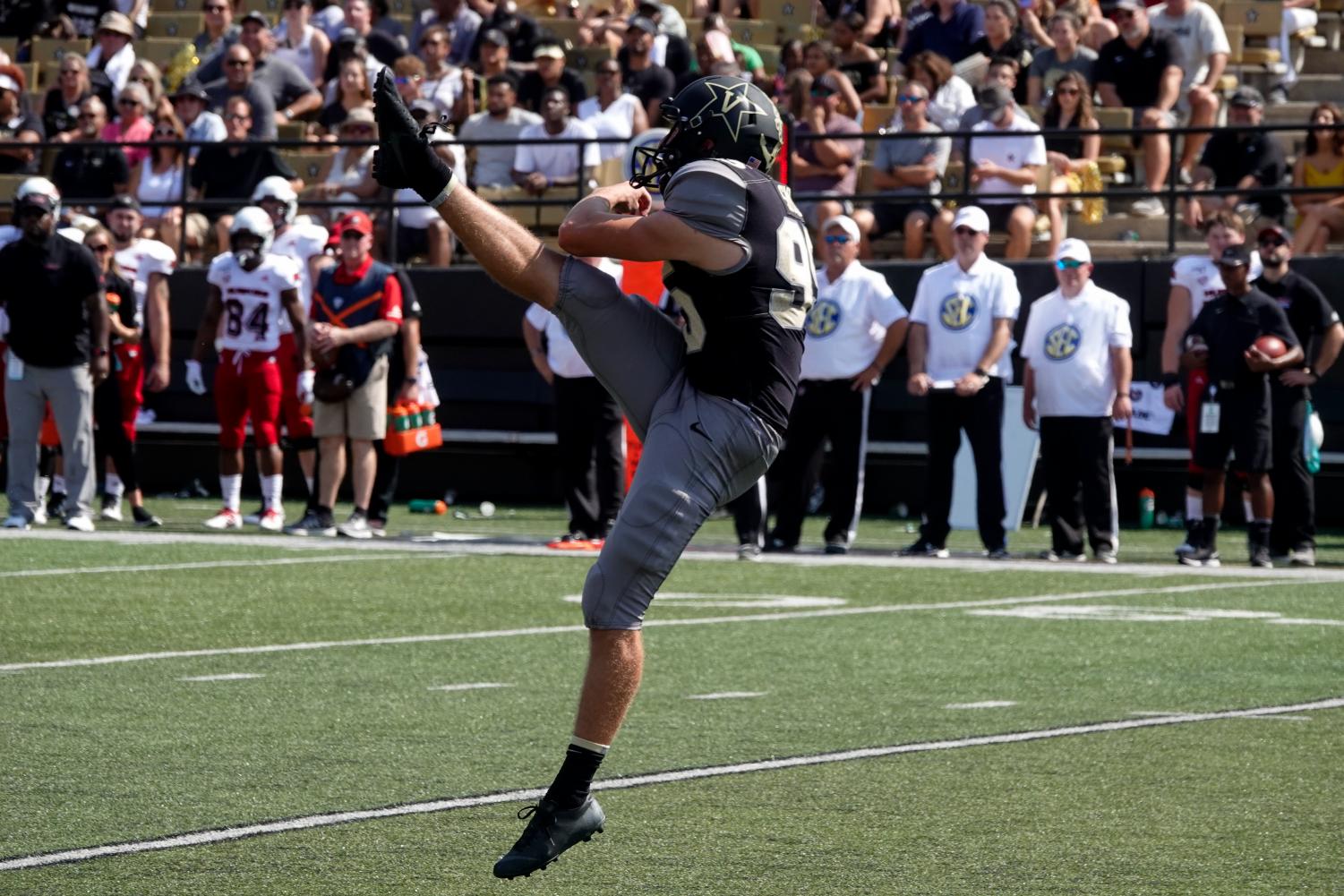 As one of the nation's top punters, Harrison Smith is relied upon to execute perfectly, but the pressure on the field is nothing compared to the pressure he's gone through off it

Coaches rely on punters to execute their job to perfection — not just once, not just enough to get by, but every time they step on the field. To an outsider, this may seem like a daunting task.

In a sense, a punter’s role draws parallels to that of an aircraft pilot.

When operating an airplane, it’s the pilot’s responsibility to ensure that the plane takes off with ease. Moreover, when it comes time to land, they must touch down on the runway with precision.

If the aircraft misses its target by a mere few feet, a disaster may ensue.

In Harrison Smith’s case, when Vanderbilt’s offense fails to convert on a drive – a conditional that has become commonplace, as evidenced by Smith’s 46 punts, the most in the country prior to Vanderbilt’s bye – the walk-on’s number is called. Smith’s punt must be placed exquisitely in order to down the opposing offense deep into their own territory.

If the punt misses its target by a mere few feet, a disaster may ensue.

“I used to always make that analogy when he was a kid,” Harrison’s mother, Amy Jenkins Smith recalls. “I would tell him that in life, he’s kind of like a pilot in a plane. When he’s flying the plane, it’s his job to make sure that the plane takes off, lands and keeps everybody safe.”

That’s precisely what punters do. They keep the rest of the team safe.

Prior to Vanderbilt’s bye week, Smith ranked second in the country in punting yards (trailing the leader by a mere six yards), booting bombs at a rate of 44.3 yards per attempt. Ever since the sophomore made his collegiate debut against the third-ranked Georgia Bulldogs, a game in which he averaged 47.1 yards per punt and downed the Bulldogs within their own 21-yard-line on five of seven attempts, Smith has done his part to keep the Commodores safe.

“I love football as much as anyone else on this team,” Harrison says. “But when you go through the things I’ve gone through, you start to realize that football is just a game. It’s a trivial part of life. Having that thought process helps me keep things in perspective.”

The pilot analogy stuck with him, the origins of which trace back to his father, Harold Smith. Harold was a jack-of-all-trades: a graduate of Vanderbilt’s Medical School, an accomplished neurosurgeon, a musician, an avid college sports fan and, of course, a licensed pilot.

Smith understands that the pilot comparison is not bound to football. He learned that at age eight, when the devastating news was first broken to him.

Harold had been diagnosed with Alzheimer’s disease.

“When his dad was diagnosed, I was so sad and I asked the doctor how to handle my young children,” Amy says. “He said it to me frank. I’ll never forget these words come out of his mouth: ‘Your kids are going to know compassion far greater than other children.’”

Harrison was just a child, but he wanted to make sure that his family could prosper. So he took it upon himself to assume his father’s role in the house.

The doctor was right. Harrison developed an unequivocal sense of compassion in the face of adversity.

“I made it my mission to always be there for my dad, especially as his health started to decline,” Harrison says. “He started to lose his memory and that was tough. I’d be sitting there and I’d notice he’d do the same thing several times, so I had to be patient with him. He’d ask me the same question four times, but I’d never get frustrated. He had trouble doing various things like putting his clothes on or eating, so I helped him do those things as well.”

In the limited time he spent away from his father, Harrison pursued football, his father’s favorite sport.

“He kept getting better and better and better,” Cody White, his coach at Brentwood Academy recalls. “He took his craft seriously…when he saw his potential, I think he really bought into it.”

But as his punting abilities progressed, his father’s health declined. Eventually, in Harrison’s sophomore year of high school, his father passed away.

“When I went to the funeral and saw what his dad was like, I thought about Harrison and where he was going to direct his life,” White says. “You could tell how influential he was. His dad was a very prominent doctor… he was a renowned surgeon, he did everything. Harrison is kind of like that.”

Harrison had just over a year to come to terms with what had happened. For the time being, he spent his time focusing on academics and athletics, the two things that mattered most to Harold.

But shortly after Harold passed away, his family was dealt another devastating blow.

Amy was diagnosed with breast cancer.

“He was going into his senior year of high school” Amy says. “That’s when things got way worse. But with any problem comes Harrison’s self-imposed responsibility to take care of the issue,” Amy says. “That’s precisely what he did.”

Harrison had previously assumed the role of his father. This time, he took it upon himself to serve as both a mother and a father to his younger sister, who’s six years younger than him. He did so while playing four varsity sports (football, wrestling, tennis and track) and applying to college.

“It was devastating when my mom was diagnosed with breast cancer, don’t get me wrong. But at that point, I kind of was used to it,” Harrison says. “It’s a tragic thing, but I honestly had been around it my whole life with my father. So it was just another moment where I thought to myself, ‘I’ve got to help my mom do this. I’ve got to do anything I can.’ I was just trying to be strong for her.”

“He can do just about anything, and he’s a great character,” White says. “I think his mother is also very influential. She’s an incredible lady. I think the Lord just placed him in a good spot because of his demeanor and how mature he was as a kid. He just handled things well.”

Just as he had done when his father was diagnosed with Alzheimer’s, Harrison stepped up. He took his sister to school and did chores around the house as needed. He’d check in on his mother as she underwent 12 rounds of chemotherapy and four surgeries. And this time, he juggled another heavy responsibility in the college application process.

“It was exactly what the doctor said. Harrison had this deeply rooted, compassionate sense of love for others that just came out in him through all the obstacles,’ Amy says. “That was just such a gift because I didn’t ever have to worry about anything other than my health. I just knew Harrison was taking all of this stress off of me.”

Some nights, Amy would leave her bed to check-in on Harrison, and she was taken aback by what he had done.

“I would go over to his bedroom and just ask him if he needed anything. He’d tell me with a smile on his face, ‘Don’t worry about it mom, I’ve got it taken care of.’ Given my health, I had to just let go and trust him. I didn’t have another choice. All he needed was my moral support and my love. I mean, I would literally go in there and ask how college applications are going, and he’d just happily tell me he’s already sent in the application without my guidance. He did all of the applications and questions by himself. It was very humbling because I was just in horrible condition, and I truly didn’t know how to guide him.”

White wasn’t surprised when Harrison was admitted to Vanderbilt, despite completing the application without help.

“He got into Vandy on his own merit,” White says. “If I remember correctly, he got a 36 on the ACT, which is a perfect score. He’s super, super smart. That said, his football abilities are not lacking. I think he might even be able to punt on Sundays at some point. He’s legitimately that good.”

Harrison’s commitment to his family allowed Amy to focus on her health. His mother never asked him to take on such great responsibility, he just did what he thought was right. It’s part of who he is.

Eventually, his mother’s courage worked in tandem with Harrison’s help. In 2018, Amy was declared cancer-free.

Now, she gets to watch Harrison live, as she’s in attendance for every Vanderbilt football game. Last week, she proudly witnessed the Commodores upset the 22nd-ranked Missouri Tigers, thanks in part to Smith, who was named SEC Special Teams Player of the Week.

“Whether it’s my breast cancer diagnosis or his father’s Alzheimer’s diagnosis, Harrison wanted to find a way to turn it into something good,” Amy says. “He wanted to make it something we can all fight together. I think that’s what he’s done this year with Vanderbilt. He’s tried so hard to just be consistent in his performance as best as he knows how, and to help his teammates that he works so closely with just be calm, be focused, be thoughtful in what they’re doing for the greater good of the whole. Much like a pilot.”

The Vanderbilt Hustler welcomes and encourages readers to engage with content and express opinions through the comment sections on our website and social media platforms. The Hustler reserves the right to remove comments that contain vulgarity, hate speech, personal attacks or that appear to be spam, commercial promotion or impersonation. The comment sections are moderated by our Editor-in-Chief, Rachael Perrotta, and our Social Media Director, Chloe Postlewaite. You can reach them at [email protected] and [email protected]
All The Vanderbilt Hustler picks Reader picks Sort: Newest
Subscribe
Login
3 Comments
Newest
Oldest Most Voted
Inline Feedbacks
View all comments
D
Dan

Unfortunately Harrison Smith had to be bumped aside at Vanderbilt because a better talent emerged:
https://www.youtube.com/watch?v=Hpc99cKe90s&feature=emb_title
Sorry, Harrison. We love you but you just aren’t good enough.

As a devoted Vanderbilt alumnus (A ’68; L ’72), who has been rooting for Vanderbilt teams since the fall of 1964 and a former Hustler sports editor, I want to thank Simon Gibbs for this inspiring story about one inspiring young man. I have always been proud to be an alumn and an Vandy sports fan, through lots of ups and downs, but never prouder than I am tonight.

Thank you for sharing this story. Thank you Harrison for bring that plane in for a safe landing!