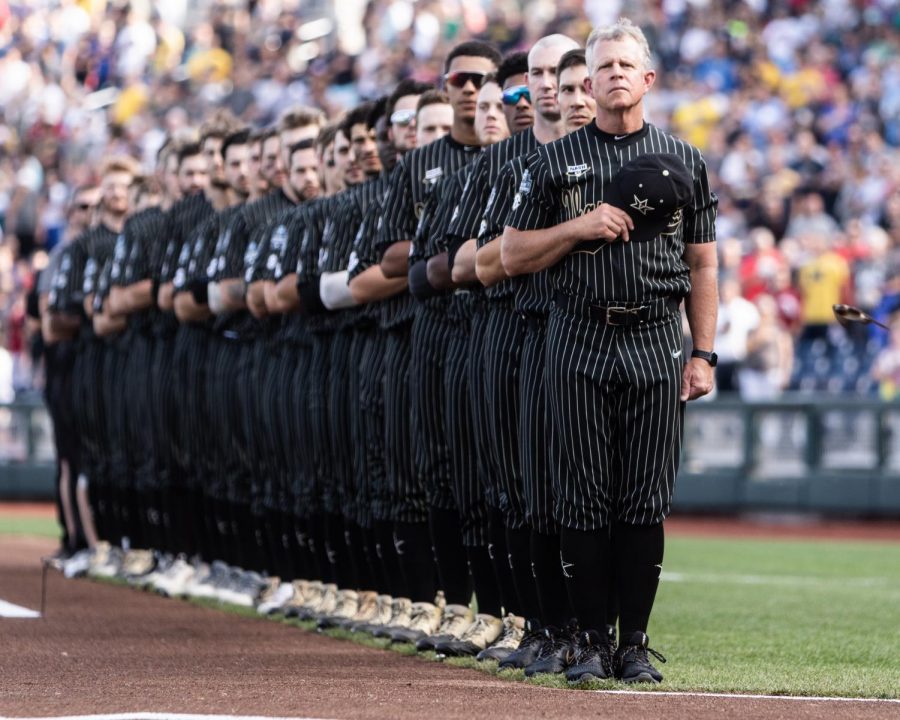 OMAHA, Neb. — Tonight, the National Championship trophy will make its final appearance in TD Ameritrade Park. After Game Three of the College World Series Final, it will be given to its deserving owner to take home.

The 58 win Commodores make a compelling case to bring the hardware back to Nashville. Vanderbilt had no trouble capturing the SEC Regular Season title, awarding them the no. 1 seed in the SEC Tournament. In that very tournament, after cruising to the finals, the Commodores showed why they’re a force to be reckoned with: they erased a 9-1 deficit against Ole Miss–their largest comeback to date was just four against Illinois St.–to defeat the Rebels and claim another title.

Erik Bakich’s Michigan Wolverines, on the other hand, make a compelling case to claim the trophy themselves. Wolverines have been playing for their postseason lives for quite some time, and they’re not going to let it slip away from them in just one game.

“It’s been one more game at a time, one more day with each other. They’ve truly — they’ve celebrated each day of the postseason like it’s been a gift because it was a very — it was a reality. We were done,” said Coach Bakich. “If we don’t come back and beat Illinois and go 0-2 in the Big Ten tournament, the season is over. In fact, if we don’t beat Maryland the next day, the season is still probably over. If we don’t beat Nebraska in Game 1 of the double-header, the season might be over. Every win that we got was critical. We were one of the last four teams in. So that told you that we needed all, whatever, 41 of those wins, whatever it was, to make a run through the losers’ brackets of the Big Ten tournament. Once we were in, the guys already had that feeling.”

Vanderbilt will hope to knock off the Wolverines in the series’ rubber match. The Commodores have shown signs of life, but their game has evolved from the merry-go-round offense that helped dominate conference opponents just over a month ago. With a National Championship looming, let’s take a look at a few keys to success for Vanderbilt, as they hope to pull off another gritty win.

Bunting early and often — Tim Corbin is big on fundamentals. It’s no secret that the baseball mastermind has the Commodores practicing their bunting day-in and day-out. In a 2013 article by USA Today, esteemed Commodore alumni like Mike Yastrzemski expressed a deep understanding of the pertinence of these quirky drills. “It’s huge,” the San Francisco Giants center fielder said to USA Today back in 2013. “We bunt every day, and we make sure because we know it’s going to come into play. You think that it’s going to come into play in championship baseball come postseason.”

So far, it’s come into play for the Commodores–just yesterday, Harry Ray’s sacrifice bunt moved runners over to second and third and positioned them to score on the ensuing wild pitches. That said, in a championship series full of small margin ballgames, it’s a bit perplexing that Corbin hasn’t called for the bunt more. The Commodores seem to strand baserunners every inning; today, if they can get a runner to second–or even to first–in the early innings, look for Corbin to utilize the sacrifice bunt to move them over. With how quiet this Vanderbilt offense has been, if a runner can get to third in the early innings, sacrifice squeeze bunts shouldn’t be out of the picture either.

Position Tyler Brown for success — Now, this may seem silly. Of course you’d want to set your closer up for success. But this situation is different than the others, Tyler Brown must be set up exquisitely after pitching 2.2 innings just last night. For once, Corbin will likely look elsewhere for bullpen support–no more two or three inning, clutch save opportunities for Brown.

After yesterday’s game, Brown said to the media, “I’ll throw until my arm falls off for this team.”

Corbin furthered that notion. When asked about Brown’s availability, he simply said, “Everyone that steps into that dugout tomorrow will be in use.”

Let’s be real here: Tyler Brown threw 40 pitches last night. He’ll certainly be available for Corbin, but it’s unlikely that Corbin pushes him to that same capacity. The bullpen has been extremely inconsistent this season, so Mason Hickman must carry the team as long as possible before a middle reliever is sent from the bullpen. Whether Corbin gives Patrick Raby, Jake Eder, Zach King, or Hugh Fisher the nod, it’s crucial that they can carry the game into the ninth. Tyler Brown shouldn’t have to “throw until [his] arm falls off” tonight.

Get on the board first — Emotions will be running rampant in this matchup, as numerous players will be suiting up for their last collegiate baseball game. In such a high stakes matchup, falling behind hurts a lot.

This series has been a story of momentum. Michigan entered the series with momentum from their huge 15-3 win over Texas Tech, which propelled them to score a few quick runs on Drake Fellows. They crossed the plate first, and they won Game One.

In Game Two, the Commodores had the momentum of an exceptional outing from freshman phenom Kumar Rocker. Eventually, they crossed the plate first, and they won the game.

Clearly, scoring the first run of the game is crucial. The top of the Commodores lineup must look to strike first.