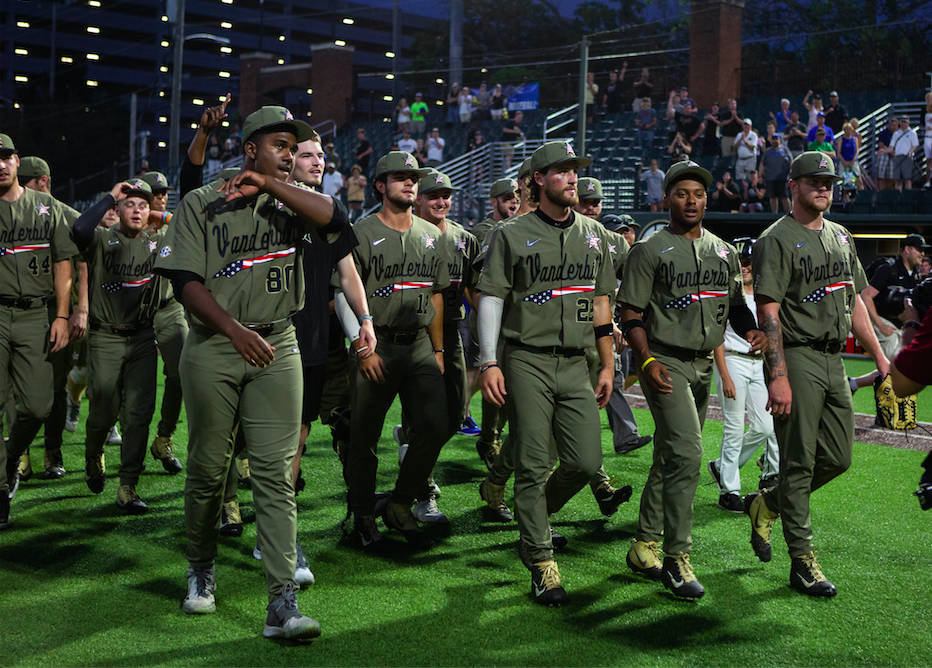 The VandyBoys certainly know how to win. They've done it 54 times this year. But more importantly, they know what it means to lose.

“Experiences like this, they go a long way in the future,” Paul said.

A player who seldom lets his emotions show looked to be fighting to hold back tears as he uttered the words. Paul was talking, of course, about his team’s extra-inning loss to Mississippi State in last year’s epic back-and-forth Super Regional.

Corbin never forgot that moment in that fateful press conference a year ago. A video he put together for his team before they left for Christmas break ended with Paul’s line.

“I wanted that in their mind,” the Vanderbilt head coach said.

So when the Commodores finally defeated Duke to clinch a College World Series berth on Sunday night, it was the first thing that popped into his.

“Listening to Ethan in this press conference last year,” said Corbin when asked what was going through his head after the last out. “That’s exactly what I remember.”

The team’s “what doesn’t kill you makes you stronger” attitude has certainly reared its head this season. Make no mistake about it, this isn’t an underdog story for Vanderbilt, or the story of a team defying the odds. This is, as Duke head coach Chris Pollard so aptly stated, a “historically good” team that deserves to be here.

But if baseball has shown us anything at all, it’s that being deserving or great doesn’t guarantee you anything. Top-ranked UCLA losing at home in its Super Regional matchup against unranked Michigan just proved that. Vanderbilt is immensely talented, but it’s how Corbin’s bunch has responded to hardship that has gotten them to where they are now.

And that place is Omaha.

Vanderbilt was oh so close last year. A game-tying inside-the-park home run by Pat DeMarco in game one of the Super Regional, followed by a walk off bomb from JJ Bleday in game two put them just one win away. And when the Commodores rallied to tie game three in the ninth off Paul’s two-run homer to right, they seemed destined to advance. That’s what made the pain of going home so much harder to swallow.

Vanderbilt has taken that hardship and run with it this season. This isn’t a team that threw the tape in the trash and moved on. This is a team that has embraced that moment of weakness and allowed it to humble them. Even after a run in which the Commodores won 20 of their last 21 games, they never took anything for granted. It’s why a disastrous first inning and an eight-run deficit in the SEC Tournament Championship game never fazed them. And it’s why when they got punched in the mouth in game one of the Super Regionals, they weren’t down for the count.

“It’s rare for teams to be able to work through tough situations like they did with such great consistency,” said Corbin. “And they did. Now they get to celebrate something after going through a tough set of circumstances last year.”

Corbin is right. Most teams fold after a game like Vanderbilt played in game one. To win 13 in a row and then lose 18-5 in the most important game of the season in front of a home crowd is nothing short of heartbreaking. It’s the kind of embarrassing, spirit-crushing game that can bury teams.

Instead, the Commodores came out with a performance that will go down in college baseball lore. Freshman Kumar Rocker took the mound with the season on the line and delivered in a way no one could have imagined. One by one, Rocker baffled the Blue Devils, fanning them with a slider that was flat-out unhittable. By the end of the night, the 19-year-old had thrown the first no-hitter in Super Regional history, striking out 19 hitters and saving Vanderbilt’s season.

The Commodores carried that momentum into Sunday, winning in classic Vanderbilt fashion. Five home runs, including two from Austin Martin, led to a 13-2 victory that clinched a College World Series berth. Remnants from Friday’s 18-5 drubbing were nowhere to be found.

It’s the last home run that Vanderbilt hit that day, though, that really tells the story of this group. The one that rocketed off Julian Infante’s bat and into the right-center field seats. The one that saw Infante hold up the number “four” in his right hand and the number “one” in his left, bring them together, and look up at the sky just before he touched home plate.

Because the heartbreak Vanderbilt has felt on the field pales in comparison to the pain they’ve felt off it.

Donny Everett’s death three years ago has been well-documented through the years. The hard-throwing righty’s passing shook this team to its core before the 2016 Nashville Regional. Not a day goes by that Corbin and his team don’t pay homage to Everett. The “41” on the centerfield wall serves as a reminder for their fallen teammate.

Vanderbilt’s senior class represents the last group of players that ever took the field with Everett. They were his teammates, his best friends, and they carry his memory in a way no one else can. Vanderbilt’s Regional matchup against Indiana State just over a week ago took place on the anniversary of Everett’s death. Infante clubbed two home runs in that game on his way to Regional MVP, holding up the 4-1 each time. It’s a ritual he started doing after every home run, and it doesn’t go unnoticed by his head coach.

“It’s only proper that on this day, which was the most painful day in Vanderbilt baseball history, that he would win the MVP,” said Corbin of Infante after that June 2nd victory.

Perhaps even more fitting, though, was Infante’s home run on Sunday, the last home run the Class of 2019 would ever hit at Hawkins Field. It would’ve been Everett’s last game at The Hawk, and Infante honored his memory in the way he always has: with a home run.

This Vanderbilt team has battled through adversity time and again en route to the College World Series. They don’t lead the nation in wins by accident. This is a team that knows how to win. They’ve done it 54 times this year.

But more importantly, the Commodores know what it means to lose, and that’s why they’re still standing.

The Vanderbilt Hustler welcomes and encourages readers to engage with content and express opinions through the comment sections on our website and social media platforms. The Hustler reserves the right to remove comments that contain vulgarity, hate speech, personal attacks or that appear to be spam, commercial promotion or impersonation. The comment sections are moderated by our Editor-in-Chief, Rachael Perrotta, and our Social Media Director, Chloe Postlewaite. You can reach them at [email protected] and [email protected]
All The Vanderbilt Hustler picks Reader picks Sort: Newest
Subscribe
Login
2 Comments
Newest
Oldest Most Voted
Inline Feedbacks
View all comments
C
C W Hayes MD FACS

Beautifully written! This is Vandy’s year. The character, the formula, the intelligence, the class, the men, the coach and the story combined with Donnie’s inspiration and spirit cannot be beat. Anchor Down! Go Dores!