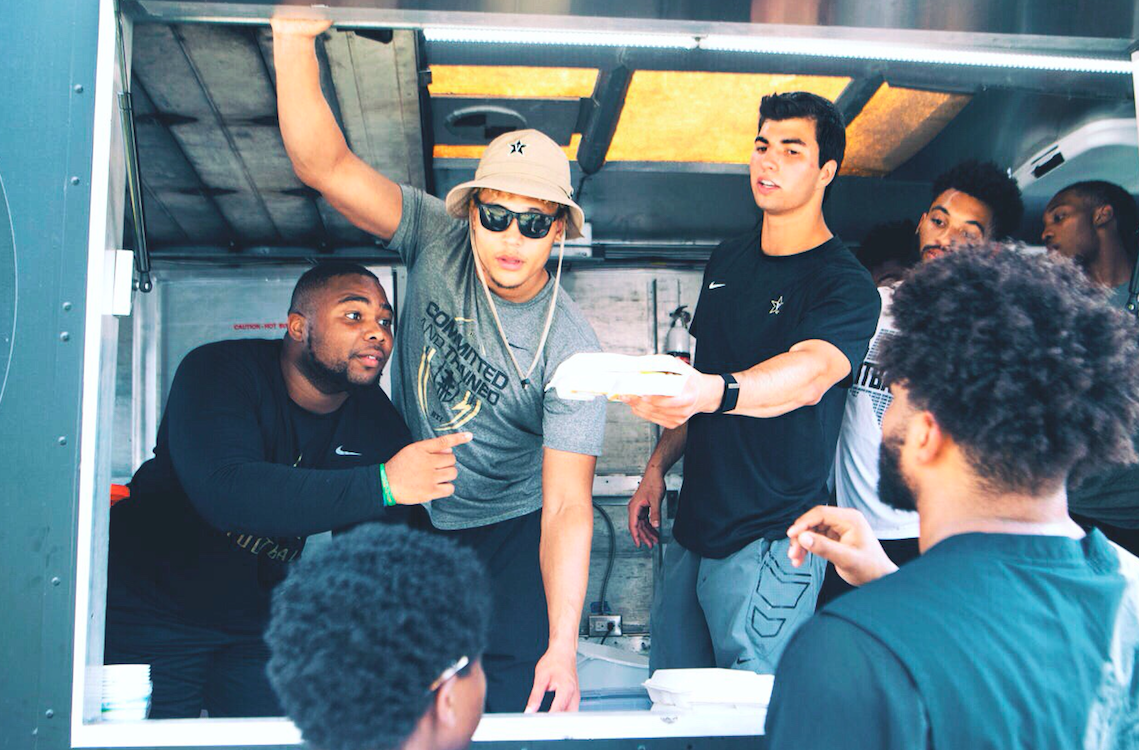 Second Spoon: How Mo Hasan is fighting hunger with an old FedEx truck

Mo Hasan’s driveway looks just a tad different than most. Go for a run down Natchez Trace behind the Vanderbilt football stadium and you can’t miss it.

Right in the front, where most families keep their sedans or SUV’s, sits the “Hunger ReliefMobile.” Even with its large, dark body, the truck is eye-catching. The pink spoon sitting in the center of a blue circle, the Miami skyline outlined from wheel to wheel, and the big, white, title letters across the side illustrate its purpose.

The truck belongs to Hasan, a senior at Vanderbilt University and a quarterback on the Commodore football team. On weekdays, Hasan lives and breathes football, fighting through the early September heat in the wee hours of the morning as he hurls passes to his receivers. On weekends, he’s fighting hunger in downtown Nashville.

Hasan didn’t start his college career at Vanderbilt. He was lightly recruited out of high school, and chose to forgo offers from Howard and Lehigh to walk on at Syracuse University. Shortly after stepping on campus, Hasan realized that his collegiate impact could stretch far beyond the football field.

After chatting with a chef at the Syracuse training facility, Hasan became aware of a harsh reality.

“When I first got to college I saw first-hand in an athletic dining hall the amount of food that was being wasted,” Hasan says. “About 40 percent of all food in the United States goes uneaten. I immediately thought to myself, I can probably do something to help curb the food waste.”

After his freshman year, Hasan transferred to Coffeyville Community College to play football, and it was there that he started to organize a plan to accomplish that goal.

Upon researching non-profits in his home of Miami, Florida, Hasan came to the conclusion that the community simply wasn’t doing enough to reduce food waste and put meals in the hands of people who need them. He decided to take matters into his own hands, creating an organization called “Second Spoon.”

Second Spoon aims to combat food waste by repackaging surplus food to distribute to homeless people in the community. The food is served out of a repurposed FedEx truck that makes several stops along a route to ensure that it reaches as many people as possible.

“We had started raising money and initially, I didn’t realize how much a food truck would cost, especially a new one,” Hasan says. “It was upwards of 200,000 dollars, which we didn’t have, so the next best solution was to repurpose a FedEx truck. We got it wrapped, we got the window cut out, and it looks just about the same.” 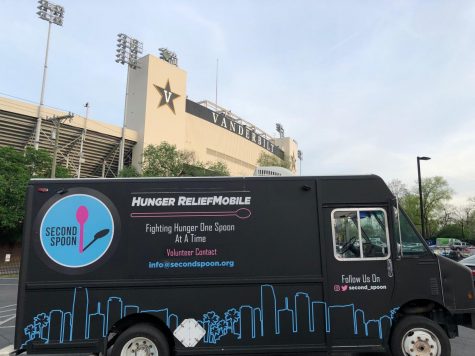 Of course, feeding an entire community in need is more than a one-man job, and Hasan knew he’d need some serious aid if he wanted to get Second Spoon off the ground. He turned to his best friend and high school teammate, Robert Burns, for help.

“Mo reached out to me in the winter and we started talking,” says Burns, now a running back for the University of Miami. “He said, ‘I have this great idea and I really need your help bro.’ When your best friend says he needs your help, it doesn’t matter what it’s for. You do it.”

The two friends went to work, building social media pages, fundraising, registering Second Spoon with the IRS, and reaching out to restaurants in Miami. While some restaurants are hesitant to donate their excess food out for distribution, Hasan and Burns have done their homework. They remind owners of the Bill Emerson Good Samaritan Act, which was enacted in 1996 to encourage food donation to non-profits through the minimization of liability.

“At first, it was literally just me, Mo, his mom, his sister and his little brother,” Burns says of the early stages of the operation. “We worked long days in the summer to make sure we weren’t wasting any of the food donated to us.”

Hasan and Burns had just begun to make their presence felt in Overtown (a smaller neighborhood within Miami), but the challenge arose when the two went back to campus in the fall. Burns remained in Miami, but Hasan was now in Nashville, attending his third school in as many years. Both Hasan and Burns relied on their fellow student athletes to help further the mission, using excess food from campus dining halls.

“The first step was getting Vanderbilt on board and they’ve been great every step throughout the process,” Hasan says of his fellow student-athletes. “As far as recruiting, it really wasn’t an issue. All my teammates, they were on board from the beginning. They knew what I was doing in Miami and they loved the idea, so they were eager to come. As soon as the word started getting out, more and more people were looking to help out and it’s been great.”

Burns echoes the welcoming nature of the athletics department in embracing Second Spoon. With a tough fall football schedule, other teams at their respective universities often take the lead, having learned the procedure from the founders.

“Monday through Friday, all the dining facilities on Vanderbilt’s campus begin to store the surplus foods,” Hasan says of the process. “They freeze them throughout the week, and then on Fridays, they bring them to Hendrix which is our athletic dining facility, and all the student-athletes pack it all up into individual boxes. Then we take it out to downtown. The good thing about the food truck is that it allows us to mobilize. We can start at one spot but then we can always move around and find homeless people.”

The mobility of Second Spoon has proved vital in combating hunger in the Nashville area. According to Feeding America’s most recent study, approximately 14.6% of people in Nashville’s Davidson County are food insecure, above the national average of 12.9%. Food insecurity is defined by the U.S. Department of Agriculture as “a lack of consistent access to enough food for an active, healthy life.”

“We wanted to be mobile, to go in places where people wouldn’t be able to or don’t have the access to,” Burns adds.

The Hunger ReliefMobile has become a regular sight in downtown Nashville. Vanderbilt athletics has jumped on board with open arms, as has the athletic department at the University of Miami. But Hasan and Burns don’t plan on stopping there. They hope to branch out to different campuses and continue to combat food waste by feeding those in need around the United States. Burns has the utmost faith in his best friend to get the job done.

“Mo is 100% the brains of the operation,” Burns says. “We met in 2013 through football. He was always working out, he stayed late, put in the extra work. I followed what he did. Now we’re making a difference.”

One Response to “Second Spoon: How Mo Hasan is fighting hunger with an old FedEx truck”