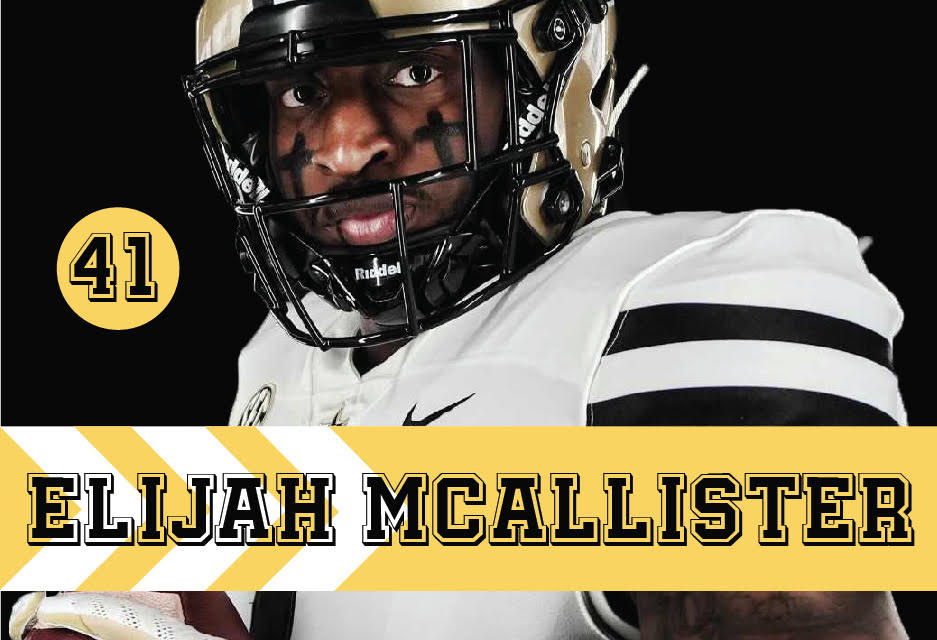 Season-ending injuries have plagued Vanderbilt’s Elijah McAllister several times during his athletic career, but his resilience and leadership have never wavered.

The junior was unable to play in the 2020 season due to a torn ACL. But for McAllister, this situation was all too familiar. He suffered an anterior cruciate ligament tear in high school, which sidelined him during the 2016 season. A few months later, the New Jersey native suffered a torn ACL in a marquee matchup between his 12-1 Rumson Fair Haven Bulldogs basketball team and Roselle Catholic. Adversity was nothing new for the soon-to-be Vanderbilt Commodore.

McAllister was a two-sport athlete excelling in football and basketball throughout high school. On the court, he propelled his team to a state title as a starter, while on the football field, he suited up for the Bulldogs as a wide receiver during his freshman and sophomore years before switching to defensive end. A junior year breakout never happened for the star as he was recovering from his ACL injury.

Individual accolades such as grabbing nearly nine rebounds per game during his senior year of high school to leading his team in receiving touchdowns in his sophomore year were impressive. But what was most notable about McAllister was his locker room presence. This two-sport captain left his high school with a legacy that embodied what a leader and team player was.

“His maturity and leadership have been what has stuck out the most over the past four years,” Rumson Fair-Haven football head coach Jeremy Schulte said before McAllister left for Vanderbilt in 2018. “They’re also getting a hard-working, motivational player who I’m sure will be a leader immediately. We’re all very proud and happy for Elijah.”

Vanderbilt has fired head coach Derek Mason and Clark Lea comes in looking to change the culture around West End. Lea’s mission to refurbish Vanderbilt football started in the first practice when he took away everyone’s jersey numbers. His mission was to show that everything will be earned. McAllister was one of the first student-athletes to buy into this approach and tabbed with the honor of receiving his jersey number back. McAllister impressed Lea and the staff right from the start, earning himself the captain title a few days before the season opener.

“It’s an honor and I am humbled by the experience and opportunity,” McAllister told The Hustler. “It’s great to see my teammates’ respect and their love for me. It’s amazing and I’m speechless.”

During McAllister’s tenure at Vanderbilt, the 6’6’’ linebacker has competed in 20 games highlighted by 40 tackles, 2.5 sacks, an interception and a forced fumble. These statistics reflect McAllister’s consistency, and his impact as a leader is irreplaceable.

Before McAllister was set to play against East Tennessee State, he had many mixed emotions. As a captain, he understood his role was to lead by example and to stay calm and focused—but he had not played in a game for over a year.

“My emotions will stay in the middle,” McAllister said. “I’m not going to get too high or too low. Fortunately and unfortunately, I have been through this before. I just try to do what my teammates and coaches want me to do and do it the right way.”

McAllister and the defense struggled in their home opener against the East Tennessee State Buccaneers but got right back on track by staying determined and focused. The next week, the Commodores thrillingly defeated the Colorado State Rams. Since then, Vanderbilt has won a thriller against Connecticut and fallen victim to Stanford, Georgia, Florida and South Carolina.

McAllister’s perspective and experience will be crucial in Vanderbilt’s defense staying confident and changing the identity of Vanderbilt football. McAllister’s voice as the quarterback of the defense and leader in the locker room has flourished from his love of the game and how much he missed it when he was absent last season.

“One of the biggest things I learned was my love for the game,” McAllister noted. “I knew I loved football and sports but I noticed my inner love for the game. Not just playing it, but coaching it. I love everything about football. I learned to see things from different angles.”

After Florida defeated Vanderbilt 42-0 just two weeks ago, McAllister voiced his frustration after the game. But just as any good leader does, he balanced that desire to improve with small victories. His trademark positivity and focused determination will continue to guide Vanderbilt forward in the Clark Lea era.

“I think you’re pleased in any situation of life when you progress,” McAllister said. “We took a step forward today by getting one percent better.”