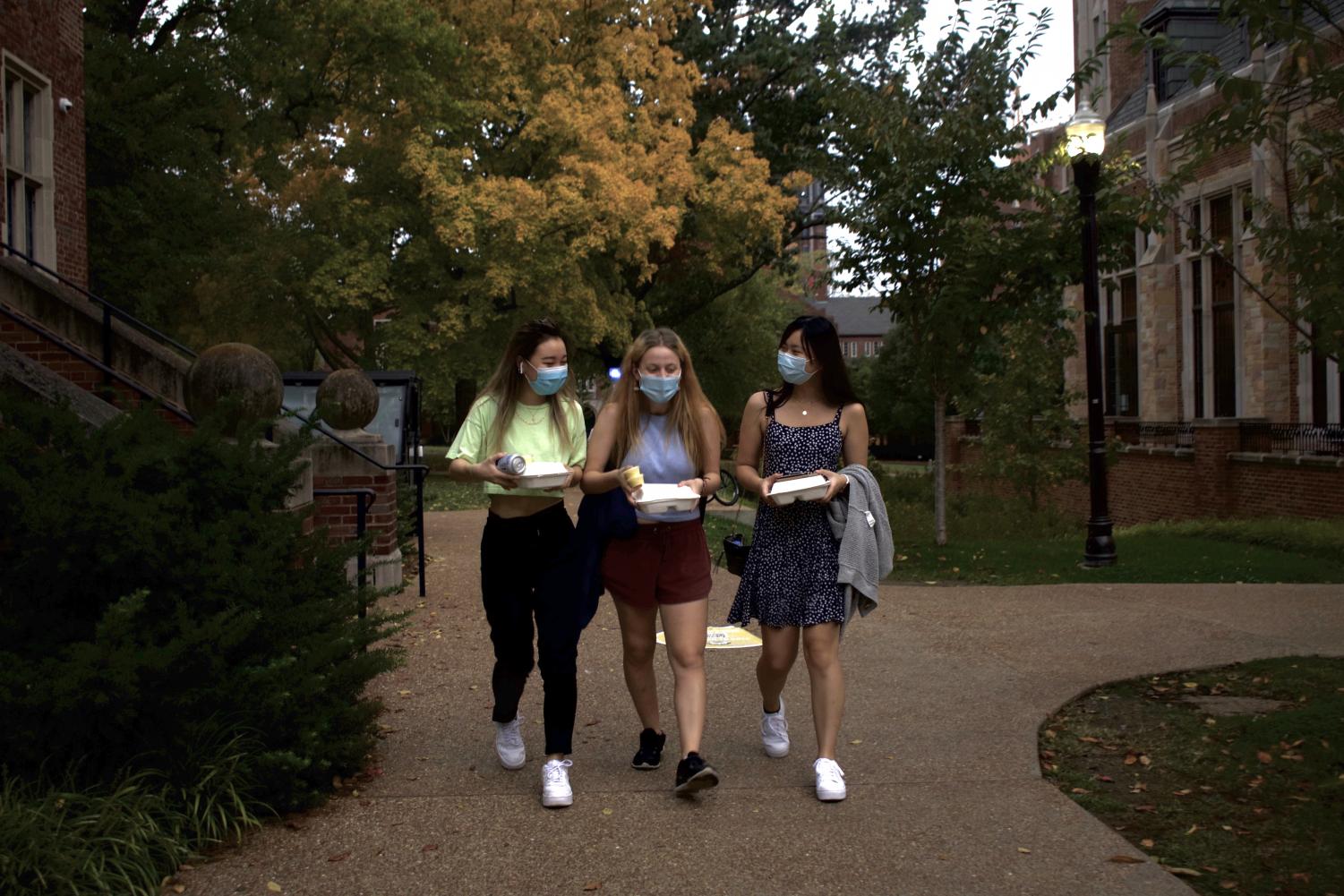 An Intro(vert) to College: Masks Cannot Stop Your Voice

Soft-spokenness and fear may make it seem like talking through your literal and figurative mask is impossible, but practice makes perfect.

I’m in the lunchline, standing on a black and gold dot, looking ahead and rehearsing what I’m going to say in my head. I reach the front of the line, lean slightly forward and say with confidence, “Water, please.” Then the dining hall staff member leans forward as well and asks, “What?” My whole plan crashes to the ground.

I’m naturally soft-spoken and used to repeating myself. I’m even used to the growing surge of anxiety as the amount of repetitions I must make increases, but now there’s another barrier—or perhaps a catalyst—to speaking normally: my mask. Don’t get me wrong: I will never pull down my mask to say something more clearly. I would rather go through the awkward and embarrassing situation of repeating myself as many times as necessary than take my mask down to talk, which would be a health risk. However, that’s not to say I’m not aware of the increased amount of times that I’ve had to repeat myself since the beginning of our mask-wearing world.

However, I recently realized I have always had a “mask” over my voice, even before COVID-19.  As I’ve learned more about social issues and formed my own opinions, I often worry about several questions that prevent me from speaking out: What if I say something wrong? What if I offend someone? What if I’m not informed enough? What if my beliefs are wrong? Isn’t it better to just not say anything, to sit back and learn, to cheer on others who are using their voices so brilliantly? Isn’t it better to hide under the mask of fear and shyness?

I did musical theater for two summers, both of which showed me that I much prefer being in the audience than on the stage. But during those two summers, I learned about a term called “projection.” Merriam-Webster defines projection as the “control of volume, clarity and distinctness of a voice to gain greater audibility.” In other words, it’s the solution to my soft-spokenness, both literally and figuratively, although it’s not nearly as simple as a one-time decision to project.

Behind the idea of projection are confidence and self-awareness.

Confidence is knowing that I may need to repeat myself multiple times before I can get a conversation rolling. It’s knowing where I am and the context I am in. But it’s also knowing and believing in my ability to communicate what’s important to me through whatever medium I may have available.

I am still somewhat afraid of speaking out and, because of that fear, my social media presence is not particularly active, but in every other area where I can, I strive to inform myself and others. Sometimes conversations surrounding different social issues require a lot of repetition. Still, I cannot back down because I don’t like repeating myself, because I don’t like raising my voice, because it feels better to just nod along. I’ve gotten better recently at calling out microaggressions and pointing out flaws in media portrayals. I am by no means perfect or an expert, but I have a voice, and I can absolutely take this figurative mask off. While keeping my physical mask on saves lives, taking my figurative mask off also saves lives.

Self-awareness is knowing that repeating myself might be necessary because other people don’t necessarily hear my voice the way I do in my head. When I speak out loud, but I am too quiet for people to hear me, it’s because I can hear myself clearly and don’t think about the fact that perhaps others can’t.

When I speak out for social issues, my ideas make perfect sense in my head, but sometimes I can’t find the right words to express them aloud. It takes practice and reflection to get the volume and meaning of my voice right. For example, this past summer I went to my first protest for the Black Lives Matter movement. More recently, I have filled in the bubbles, sealed all the right envelopes and stuck my ballot in the mail. I have researched social issues either by reading several news sources (to understand multiple perspectives), watching movies and TV shows that delve into these issues and doing projects in school on these topics.

On the one hand, I do have to be aware of how other people perceive me, but at the same time, I have to keep in mind that I am who I am. I speak softly because I don’t like loud noises. I speak softly because there’s only one volume setting in my head. When I spend a lot of time simply thinking to myself, it’s sometimes hard to readjust to letting those thoughts outside, especially when the mask is there to throw my breath back at me.

Even so, there’s a certain amount of trial and error which we must all experience if we hope to learn. I must continue to repeat myself until I’m able to project better. I must repeat myself so as to not lose what I want. Sometimes it’s easier to just go along with what the dining hall staff suggests so that I don’t have to repeat myself again. But it’s better in the long run (and for my dinner) if I just root myself in that embarrassment and say it again.

In the same way, I must be willing to speak up and say things wrong, allow others to help me, and move forward.

As I write this article, 10 days remain until the presidential election. I’ve been waiting for this moment for four years, since I realized that the best way to take off my figurative mask is through concrete action. What better way to project my voice than to vote? The greater fear than being wrong, misinformed or offensive is that I will regret my decision to stay silent. Let’s be clear: the state of this country is a disaster right now and perhaps this chaos has grown my resolve, or more so my anger and that has been enough to fuel my voice. But, at some point that anger will die down, as will the fuel. It’s at that point that I must remember the greater fear and continue to use my voice.

I implore you, whatever beliefs you may have, whatever situation you find yourself in now, go out and vote. Use the voice you have now, make mistakes, learn, be better and most importantly project.