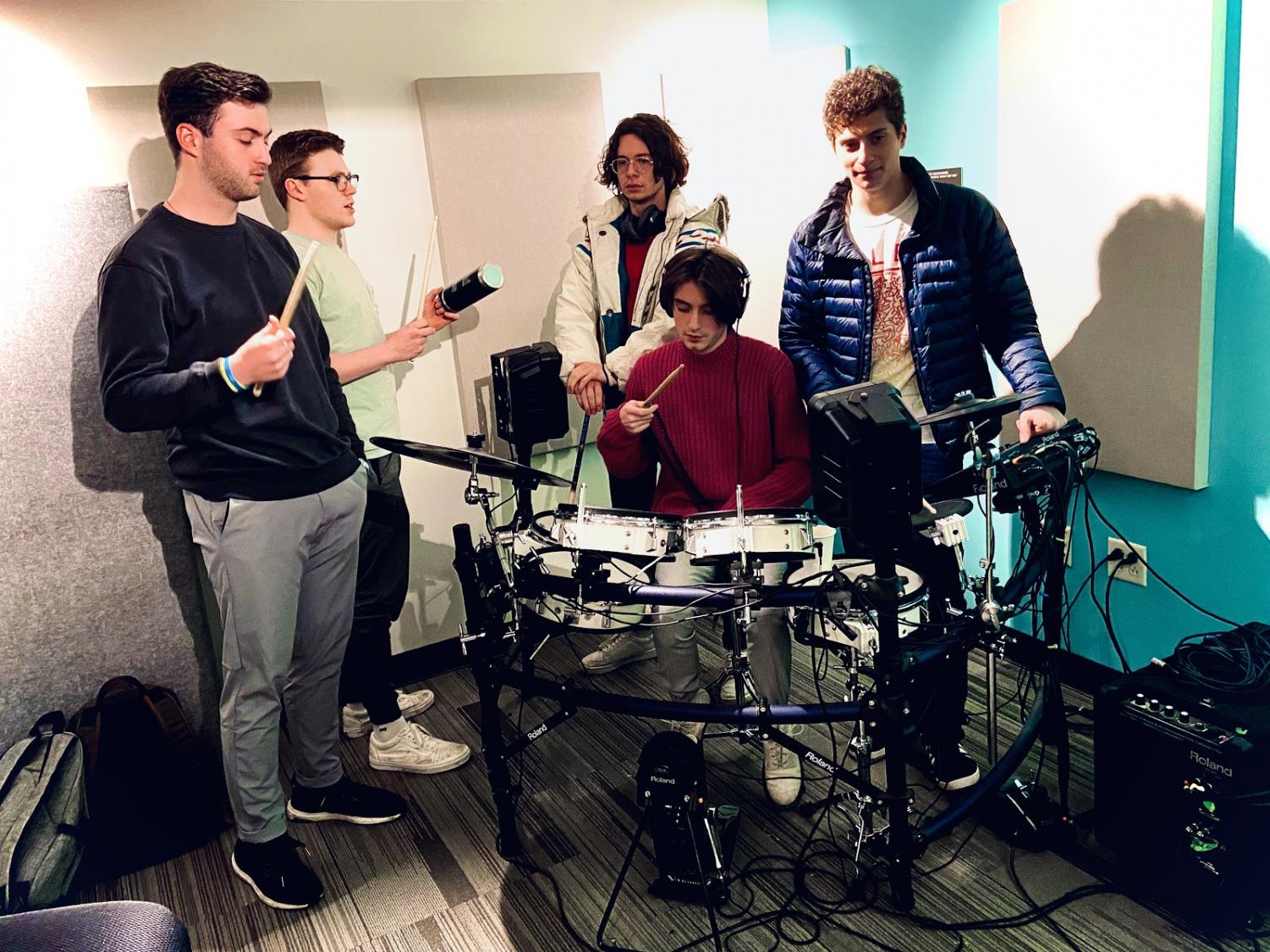 The members of Bottom Text are just as sarcastic as they are talented, but we look forward to hearing more about them in the future.

That’s the title of Bottom Text’s latest release, a five track EP showcasing the group’s eclectic pop/funk stylings. If you’re curious about the title’s origins… well, so am I. My interview with the band was brimming with banter, humor and good vibes; here’s what we know about this emerging band on campus.

The band started a little over a year ago as a project led by Jackson and Matalon. Templeton joined shortly thereafter, as two members of what was originally a four-piece band quit. At the beginning of 2020, Shanahan and D’Onofrio joined in order to complete the group’s sound at live shows. As Bottom Text has grown, discovering their individual sound, patterns have emerged in their collective creative process. Typically, Matalon first crafts the seed of a song on his keyboard, creating the chord progression that lays the foundation for proceeding contributions. Templeton then takes Matalon’s demo and adds lead lines on the guitar. Bass and drums are added electronically, though now the band is interested in recording live drums for their new releases. Jackson’s vocals are usually reserved for last, filling in gaps that Matalon and Templeton purposefully leave in their compositions for later completion.

“We recorded the entire first EP in Matty’s freshman dorm room last year,” Jackson said. “We made all of that music on Commons.”

In the past year, the band has already invested in the future of their music. The band is proud of the substantial development they’ve experienced since their beginnings, and they acknowledge the potent potential for future expansion.

In everyday conversation, the band carries over the same energetic dynamic that’s apparent in their music. As a whole and individually, members of Bottom Text have a love of funk, clever pop and the indie Lo-Fi phenomenon Vulfpeck. The band is very much like the carefree, dedicated funk band to which they owe most of their sound. As often as I’d get straightforward, factual answers from the guys, a response would morph into banter, with the members launching off one another to craft increasingly elaborate and ridiculous jokes. When I asked about upcoming live shows, I got this witty response:

Interestingly enough, the single instance without a general consensus centered around the group choosing their favorite original track. Every member had a unique pick, all supplying thoughtful rationale for their selection.

“Regardless of our individual music tastes, everyone’s so knowledgeable about music that we all just know how to play together,” D’Onofrio said.

The group has played one show with their current lineup at an off-campus house party. Though they’ve only performed in university settings, such as WRVU events and busking outside Rand, they have ambitious plans in the near future that will surely expand their audience.

“We’re looking at stuff in Knoxville and Memphis. I’d love to do a little Tennessee tour one day,” Templeton said.

During the interview, Jackson spontaneously announced that the band was soon scheduled to play a Sofar show. Sofar is an underground venue in which artists and audiences alike are kept in the dark about the venue and performers until the day of the concert, you can read more about them here.

Though the band is currently unsure of exact concert dates, it’s worth following Bottom Text on Spotify and on social media for more information on upcoming shows and digital releases.