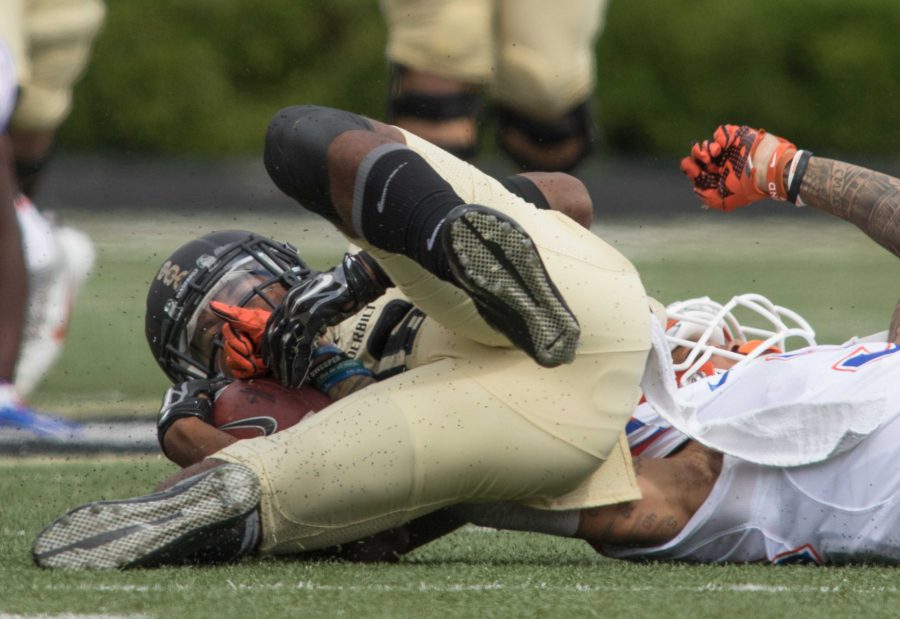 Going into this week, Vanderbilt had a massive opportunity to recover from their 59-0 drubbing at the hands of Alabama.

To quote Pete Campbell from Mad Men, “Not great, Bob.”

Vanderbilt lost 38-24 to a Florida team that looked like a top-caliber team, but in reality, is quite mediocre. Once again, everything Vanderbilt needed to do to have success, they seemingly could not do.

Here is your Commodore Brunch menu for this week:
Running and Run Blocking
In this week’s press conference, head coach Derek Mason called his offensive line “soft inside” and challenged them to be better this week.

They were about as soft as a soft serve cone from Dairy Queen yet again.

The Commodores ran the ball 20 times, compared to 40 passing attempts, rushing for just 46 yards. If I were Ralph Webb, I would be fuming at my offensive line and offensive coordinator Andy Ludwig.

Yes, the offensive line has not been stellar in giving Webb holes to execute, but the rushing play calls have got to change as well. If you can’t find any holes on the offensive line up the middle, run the ball out wide. Run pitch plays. Run counter plays.

News flash: running one reverse play per game does not constitute a diversified run game.

According to Football Study Hall, Vanderbilt is stuffed for no gain or a loss on run plays 20.7% of the time through the first four weeks of the season. That is not acceptable with a talented back like Webb.

The offensive line’s woes cannot be the only explanation for the woes of the running game. Quarterback Kyle Shurmur has been sacked just 3 times through five weeks, compared to 32 all of last season.

When the pass protection is that good, but the run game is stagnant, you have to look at the sideline and the plays being called.

Meanwhile, the run defense for Vanderbilt was just as terrible. Florida ran the ball 51 times and racked up 218 rushing yards. Malik Davis looked like a young Emmitt Smith out there.

It shouldn’t have been surprising that Florida was going to run the ball, considering how often they did it. We’ve seen Vanderbilt make adjustments on defense, like the way they were able to contain Jesse Ertz of Kansas State.

The fact that they weren’t able to adjust and slow down the Florida run game is inexplicable. With powerful running backs like Nick Chubb remaining on the schedule, the run defense needs to put on their big-boy pants, and fast.
Wrong-Side Kick
Late in the game, Vanderbilt cut Florida’s lead to seven points. With just over 3 minutes remaining and with two timeouts, Vanderbilt had a real chance to get the ball back.

Then they decided to take an onside kick.

Instead of pinning Florida at their own 25 yard line or potentially deeper, Florida started their possession at the Vanderbilt 48 yard line.

For the second week in a row, Vanderbilt cheated themselves out of a chance to make the game interesting. No team can win playing against the opponent and themselves, and Vanderbilt continues to choose to shoot themselves in the foot.

If it weren’t for the decision to play Wade Freebeck at quarterback against South Carolina last season, this would be the worst coaching decision Mason has made in his tenure at Vanderbilt.

Given how bad Vanderbilt’s run defense was throughout the game, there’s a solid chance Florida would have been able to completely run out the clock. But, with two timeouts and at least 75 yards of field to defend, maybe, just maybe, Vanderbilt could have gotten the ball back.

With the onside kick, the only reason Vanderbilt got another chance was through a bad spread cover touchdown by Davis.

Inexperience is no longer an excuse for these poor play calls. They’re few and far between for Mason, but they happen in big moments, and if Vanderbilt wants to take the next step in terms of relevancy on the national stage, these kinds of mistakes can’t happen.
Tempering Expectations
So, about that whole SEC East thing…

It’s not impossible, but hopes of winning the SEC East should be put aside for the time being. Unless Vanderbilt springs a monstrous upset over Georgia this weekend, it seems as if the East title is out of reach.

But, that doesn’t mean Vanderbilt has nothing left to play for.

Realistically, this team could win out after they play Georgia. The rest of their opponents after this weekend are in worse shape than they are. Eight or nine wins is incredibly realistic for Vanderbilt.

And given past expectations for Vanderbilt, can you really complain that much about that?

Vanderbilt comes home for homecoming weekend when they take on Georgia this Saturday at 11 am.