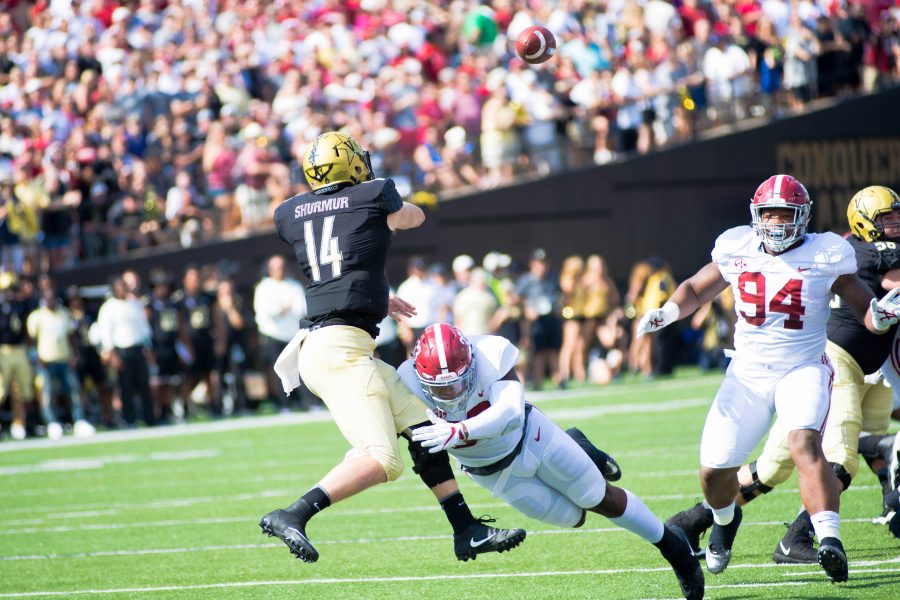 Today, Vanderbilt football made history, but not in a good way.

The Commodores’ third worst loss in history was as painful to watch as the score suggests. In front of a Bama-heavy sellout crowd, the Crimson tide completely smothered the upstart Commodores 59-0, reminding everyone why they are the best team in the nation. 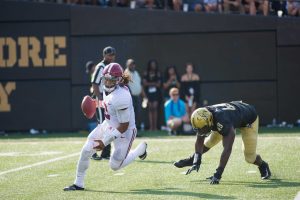 The Tide scored in 9 of 12 drives, with only three scoring drives taking more than 8 plays or 3 minutes. The Alabama offense averaged over 10 yards per completion and 7.5 yards per rush. Five-star true freshman Tua Tagovailoa replaced Jalen Hurts early in the second half and passed for two touchdowns, one after evading two Vanderbilt defenders in a Lamar Jackson-type play.

Vanderbilt’s struggles last week against Kansas St. – such as the run game and control of the line of scrimmage – were mercilessly exploited by the Crimson Tide, and in no aspect of the game did the Commodores outplay Alabama. A staggering 677 yards of total offense were given up, compared to Vanderbilt’s own 78 — Vanderbilt’s worst margin of yards per team in program history. The first down disparity, 38 to 3, time of possession, 42:55 to 17:55, and total plays ran, 93 to 38, further show the dominance Alabama exerted over the Commodores. 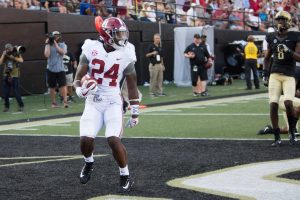 Alabama ran 48 plays in the first half, and Vanderbilt earned 49 yards. A hot first drive looked promising, but a pass deflection off of Jared Pinkney’s hands landed in Alabama defensive back Ronnie Harrison’s hands, and Vanderbilt never found their rhythm after that point.

Alabama rushed for four consecutive touchdowns, and topped the first half off with a field goal. Damien Harris and Bo Scarbrough punched the ball in a combined five times, and Jalen Hurts added in a few drive extending scrambles adding up to 48 yards on the ground.

Running back Ralph Webb again struggled to run the ball downfield. Alabama controlled the line of scrimmage, and Ralph could rarely get back to the line of scrimmage before making contact with a defender. Quarterback Kyle Shurmur was knocked down and harassed throughout the half while going 3-13. Four three-and-outs in the first half reflected how poorly the offensive effort went.

Coach Derek Mason expressed both discontent with how the team played and respect for the tremendous program that Alabama football is. In the post-game interview, he was very frank with how he felt, saying “I thought I was out coached today, I thought we were outclassed”

He stressed the importance of preparing for next week’s SEC East opener in Gainesville.

“We gotta get back out, get back to work. I’m more concerned about our response,” Mason said. 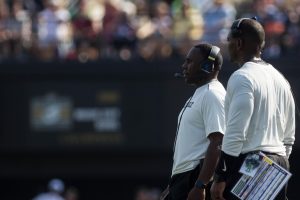 He pointed to the snowballing effect of one bad play leading to another one, and the mental strength it takes to overcome demoralizing events on the field, saying “you can’t let one become two.” He emphasized putting this loss behind the team and preparing for what always matters most, going 1-0 next Saturday.

A tremendous bounce back opportunity next week at a ranked Florida team will test Vanderbilt’s character and resolve.

“You can’t let one become two.”