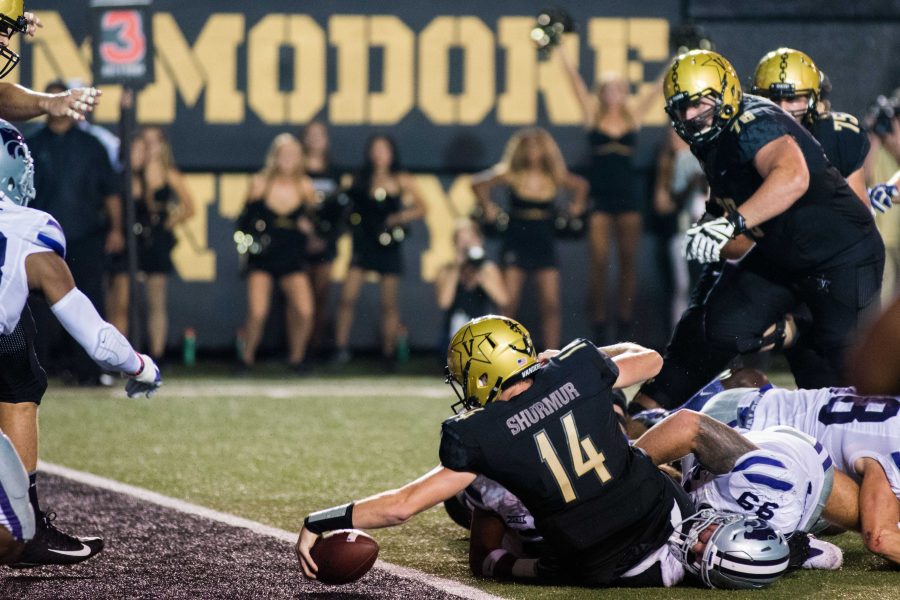 Coach Mason believed it could be done.

The Vanderbilt Commodores knew it could be done.

Those who follow Vanderbilt closely knew it could be done.

The only group of doubters left was everyone else, and there’s no way to doubt this team anymore.

It wasn’t the prettiest of games, but Vanderbilt found a way to spring the upset, a 14-7 win over No. 18 Kansas State at home. While we didn’t see the aerial assault that won them their first two games, the Commodores showed the fans, the media and the world that this is a team worthy of national respect.

They also, for the most part, crushed Kansas State’s potent offense, much like Dorothy’s lovely Kansas home crushed the Wicked Witch in The Wizard of Oz.

Fun fact: the last time Vanderbilt beat a ranked nonconference opponent was in 1946, when The Wizard of Oz was just seven years old.

Be prepared for a lot more historic fun facts like that throughout the season.

Here’s your Commodore Brunch menu from week four:
Shurmur the quarterback becomes Shurmur the leader
Quarterback Kyle Shurmur was the hero of the day, turning a broken play at the goal line into a two-yard touchdown scramble to put Vanderbilt up for good.

But, he was nearly the scapegoat of the game.

He was lucky to see his second-quarter fumble overturned upon video review. Kansas State looked like they had scooped and scored at an incredibly opportune time and could put the game in a chokehold.

Shurmur recovered from there, and while he didn’t put up any flashy numbers, he put the offense on his back and put in every ounce of effort to get the Commodores in the end zone.

That’s the type of leadership this offense has been missing. They really haven’t had a true offensive leader, both in terms of performance and spirit, since Jay Cutler.

In order to be a leader, Shurmur first had to be accountable, and that’s exactly what he’s done, according to Derek Mason.

“He’s a guy who can go out and make mistakes and forget about them,” he said. “He’s unflappable in that way. These guys are all accountable too. When you get a group that’s accountable, that’s when you go out and succeed.”

If you like Shurmur now, remember he has another year left after this one.

It might be time to start labeling Vanderbilt’s secondary the “VUPD: Vanderbilt University Pass Defense.”

The Commodore defensive backs have never been particularly bad over the last couple of years, but the defense seems to always be supported by their stellar front seven. All the attention has gone to their performance early in the season, with players like Charles Wright and Oren Burks wreaking havoc on offensive lines.

While the front seven did a good job of slowing down Kansas State quarterback Jesse Ertz in the run game, the secondary completely shut down the Wildcats’ passing game. They held Ertz to 10 completions for 76 yards.

If you compare that to his first two weeks, in which he threw for 333 yards and 178 yards, respectively, one could say that Ertz was definitely not in Kansas anymore.

They also intercepted Ertz twice in two key situations in the fourth quarter, the final one leading to the game-winning touchdown for Vanderbilt.

“We knew that they like to throw the ball,” White said. “It was a team effort. We were keyed up on their game plan.”

With a performance like that, it’s almost as if guys named Moore, Hayward, Hal and Ladler were out there for Vanderbilt.

This secondary won’t play second fiddle to the front seven for much longer.
Give them that ranking
Vanderbilt hasn’t been nationally ranked since the end of the 2013 season, right around when James Franklin was preparing a betrayal worthy of any soap opera.

Now, with three wins, including one upset over a ranked team, Vanderbilt looks set to take that step and jump into the top 25.

Make no mistake, Vanderbilt should be a ranked team. There is no denying that anymore.

The question of “will they be a ranked team?” is a little bit different.

Vanderbilt received five votes in the Coaches Poll last week, and got two in the AP Poll. They’ll need at least 70 more votes to get into the rankings, probably more.

Did they convince enough people around the country to vote for them? Did enough ranked teams stumble this week?

That all remains to be seen, but if there is any justice in the world, Vanderbilt should be a ranked team this week. Mason may not want to talk about it, but believe me, the players in that locker room know they deserve that ranking.

UPDATE (12:00 pm): Vanderbilt was not ranked in either the AP or Coaches Poll. However, they were one of the top vote-getters left off each poll.

If Vanderbilt had received more votes after last week, they’d be ranked this week.

With that, there’s something satisfying about both Vanderbilt AND Kentucky getting more AP votes than Tennessee.

Vanderbilt looks to continue this roll when they face off against the best team in the country, Alabama. It will be a wild party next weekend with SEC Nation coming to campus for their Saturday morning show.

Get ready to ride the wave, Vandy Nation. It’s only just begun.