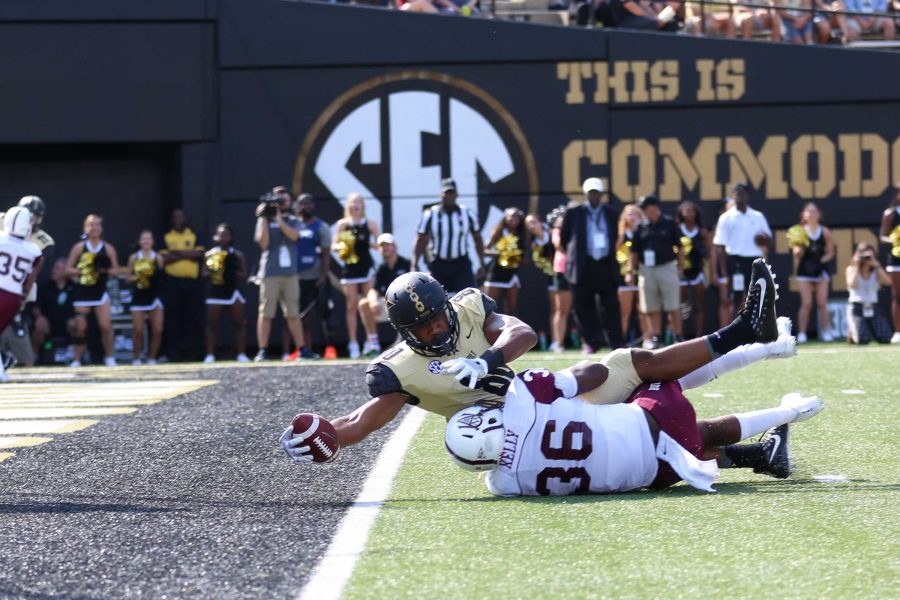 Jared Pinkney reaches across the goal line for a touchdown in Vanderbilt's home victory over Alabama A&M on September 9, 2017. Photo by Claire Barnett.

The Vanderbilt Commodores are now 2-0 for the first time since 2011 after a dominant 42-0 performance at home against the Alabama A&M Bulldogs on a gorgeous Saturday afternoon in Nashville.

In his comments following Vanderbilt’s convincing season-opening win at MTSU, Derek Mason addressed both special teams and an unbalanced offense as areas to improve upon in the week two matchup against Alabama A&M. His team responded in resounding fashion.

Kyle Shurmur shredded a confused A&M secondary, and the double-headed monster of Ralph Webb and Khari Blasingame added consistent gains on the ground in a balanced and unrelenting offensive attack.

“Shurmur, for the second week in a row, started fast,” Mason said after the game. “I like the way he played. I thought he had command of the pocket, I thought he saw everything he needed to see.”

The Commodores’ special teams contributed to the rout, putting the offense in position to score with excellent field position throughout the afternoon, including a blocked punt late in the second quarter to effectively end all hopes of a comeback for the Bulldogs.

The Commodores’ offense set the tone early in the game, marching down the field in an opening drive capped by a six-yard touchdown dash by Ralph Webb. They would add seven more by the end of the first quarter on a 10-yard reception by Jared Pinkney, set up by a 21-yard heave to Trent Sherfield and a suffocating Vanderbilt defense that held the A&M offense at bay in two short-lived drives.

As unlikely as an upset seemed after one quarter, it was all but impossible by the time halftime arrived. The Commodores and Bulldogs traded empty possessions to start the second quarter before Kyle Shurmur unloaded on a 45-yard touchdown pass to Kalija Lipscomb, making it 21-0. Andrew Rector’s second-career blocked punt set up Vanderbilt’s fourth touchdown of the day, a one-yard quarterback sneak by Shurmur. The quarterback sneak continued a stunning performance by Shurmur, who was perfect in passing percentage until the third quarter.

The Vanderbilt defense continued to dominate in the second half, rarely conceding any first downs and holding the Bulldogs out of Vanderbilt territory through three quarters. Oren Burks picked up his first interception of the year in the third quarter, and Dayo Odeyingbo made an early submission for play of the year by blocking an Aqeel Glass pass and snatching it on the way down for the circus interception.

“They’ve got to learn fast. He’s going to play in the SEC, he’s had a chance to really get his feet wet in games one and two, and now we move on to big boy ball, so let’s go.”

Tommy Openshaw nearly topped it moments later with a 56-yard field goal attempt that narrowly glanced off the crossbar.

Shurmur and Webb’s were done for the day by the end of the third quarter when Duece Wallace and Jamauri Wakefield took over on offense. Shurmur finished 15 of 18 with 202 yards and four touchdown passes, while Webb and Blasingame combined for 109 yards rushing with a touchdown for Webb.

Vanderbilt returns to the field this coming Saturday when they take on Kansas State. Kickoff is at 6:30 PM central.