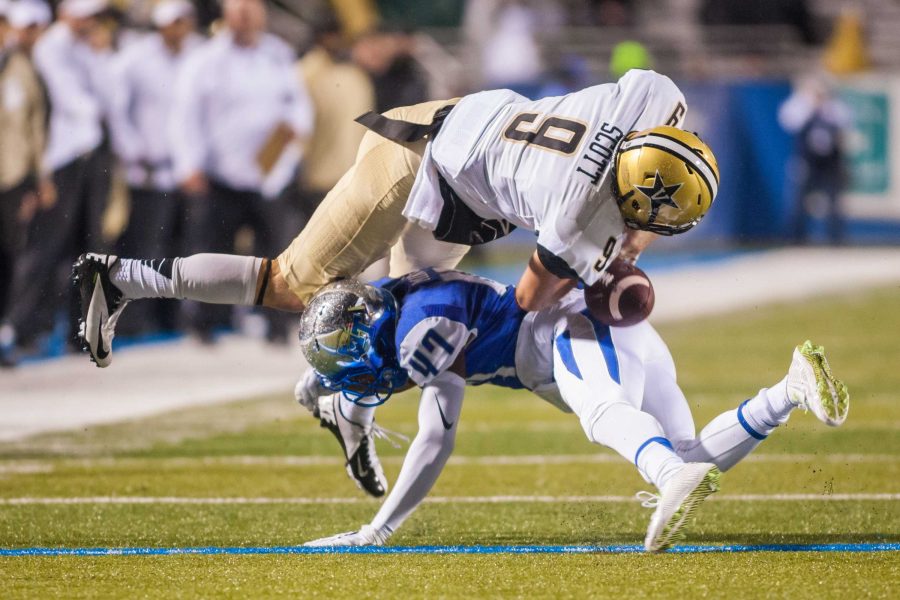 As another season rolls around, and another opening weekend rounds the corner, the buzz, hopes, predictions and anticipation surrounding Vanderbilt football has again peaked as players and fans gear up for Saturday.

Vanderbilt will face an offensively-talented, but defensively-lackluster MTSU team this weekend, and hopes to secure their first opening weekend victory under Coach Derek Mason. On both sides of the ball, there will be key matchups that will turn the tide in favor of one team or another. Here are three matchups to watch this Saturday.
LE Walker Brady vs. RT Devin Cochran
Following an explosive first year in which he racked up a freshman-high 7 sacks and earning first team All-American honors, Walter Brady transferred from Missouri to MTSU, and due to NCAA guidelines, had to sit out the 2016 season. As the season opener rolls around, you can be sure to expect an improved defensive end with another full year of growth, practice and rest under his belt. Already battle-proven against stout SEC competition, he is ranked 145 by 247sports.com on their 2017 Best College Players list.

Meanwhile, following lots of offseason switches to optimize chemistry, redshirt freshman Devin Cochran appears to have earned himself a starting spot at right tackle for Vanderbilt, and he will have to learn on the job against a lethal pass rusher. If Brady controls that match up and gets to Kyle Shurmur, the chemistry and offensive production we saw at the end of last season will be jeopardized early in the season.
WR Trent Sherfield and WR C.J. Duncan vs. CB Darryl Randolph and CB Michael Minter
At the end of last season, Vanderbilt’s passing game saw a steady increase, culminating in 45 and 38-point games against Tennessee and Ole Miss, respectively. The Commodores went 4-2 in the second half of the season, with a rivalry weekend upset over Tennessee clinching them a bowl berth for the first time under Coach Mason.

Veteran receivers Sherfield and Duncan have had over two years to improve their skillset and chemistry with QB Kyle Shurmur, all under stable coaching and staffing conditions, and the time has payed off. RB Ralph Webb pulls defenders into the box – leading the SEC last season in facing 8-man boxes – and opens up high one-on-one matchups so easily exploited for big gains.

MTSU’s porous secondary – which allowed more than 250 yards and 35 points per game last season – will provide a gentle learning curve, so expect to see big games from these two.
ILB Oren Burks vs. QB Brent Stockstill
In last year’s matchup, Brent Stockstill gashed the Vanderbilt secondary for nearly 400 passing yards, three touchdowns, and 24 rushing yards. Vandy’s defensive line only dropped Stockstill once, and the leading tackler during that game – who also happened to be the SEC’s tackle leader and unanimous First Team All-American– has graduated. Zach Cunningham’s shoes as the defensive anchor and chief playmaker will be hard to fill, but Oren Burks seems confident that everyone will step up.

“It’s going to be a collective effort and guys have been working extremely hard to increase the execution,” Burks said. He also said that Derek Mason’s expertise will make up for the loss of the senior.

The highest-ranked player on either side of the ball this Saturday will be MTSU receiver Richie James, ranked 58th on the same 247sports list. If Oren Burks and the  defensive line can alleviate pressure on the secondary by pressuring the 191st overall ranked Stockstill, it would help the defense avoid big offensive gains, break up offensive rhythm, rattle Stockstill, and keep the offense on the field for as many snaps as possible.