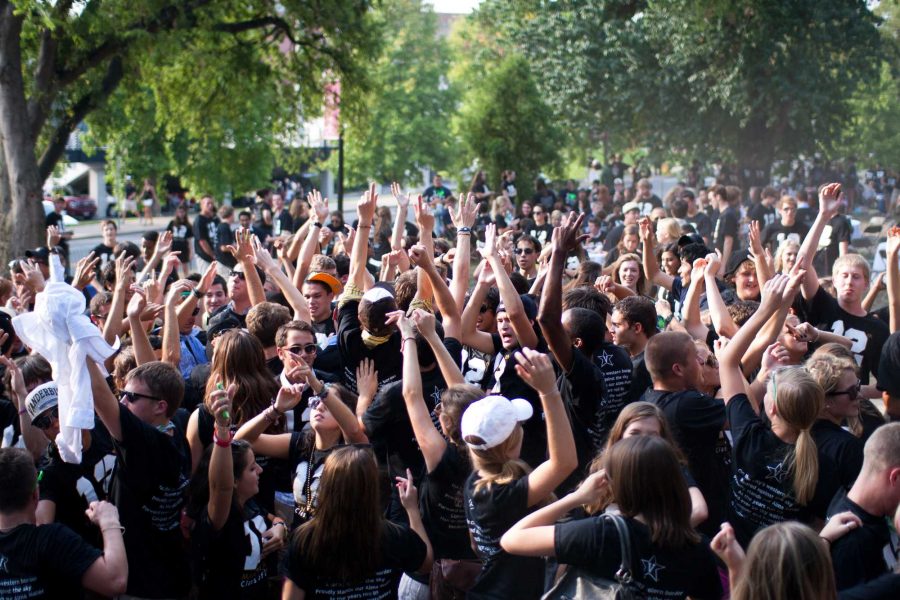 First Year Students get pumped up for the football game at the 12th Man Tailgate on September 3, 2011.

Vanderbilt Football has moved to the digital era with their student tickets.

For the first time, Vanderbilt student football tickets will be mobile-only, starting with the team’s home opener next Saturday against Alabama A&M.

The decision comes after the ticket office listened to student feedback on tickets and found a need to make the ticket process easier for students.

“This has been coming about for awhile,” said Eric Jones, assistant athletic director for ticketing. “We’re always looking at what we can do to make things easier for fans, and students really are our biggest fans. We’re constantly striving to streamline, and streamlining with us, the biggest thing is listening to what students have to say.”

Here’s how the new process works. On Mondays at 5:00 PM during game weeks, students will receive an email to their student email address through Ticketmaster, alerting them that the online ticket portal is open to claim their tickets. Students must then access the link from their computers, as the website is not optimized for mobile use. After claiming their ticket on the computer, students will be able to download the ticket code to their phones via email.

The ticket office strongly recommends that students add their ticket to a wallet function on their phones prior to entering the stadium, such as Apple Wallet, as the cell reception around Vanderbilt Stadium may hinder them from using their code straight from their email inbox.

There has not been any change to the allotment of student tickets available. Once all of the student section tickets have been claimed, any student who did not claim a ticket will be able to claim an unused ticket 15 minutes after kickoff at the box office at Memorial Gym behind centerfield of Hawkins Field.

According to Jones, they collaborated with student affairs, greek life and members of the student body to make sure this system is ready to roll without a hitch for the home opener.

“We’ve done a real good job of testing it,” he said. “We’ve worked hand in hand with the Dean of Students office, so Clayton Arrington, Dwayne Elliott and Kristen Torrey have been monumental on that. We even had some students that tested it, and the tests were successful. I think that this is something we need to do. There’s always going to be complications. I think that we have to overcommunicate it.”

In addition, Vanderbilt has implemented a clear bag policy for home games. According to athletics, the following types of bags are permitted in Vanderbilt Stadium:

Bags that are clear plastic, vinyl or PVC and do not exceed 12″ x 6″ x 12″;
One-gallon clear plastic freezer bags (Ziploc bag or similar); and
Small clutch bags, with or without a handle or strap, that do not exceed 4.5″ x 6.5″ (approximately the size of a hand).
An exception will be made for medically necessary items after proper inspection at a gate designated for this purpose.