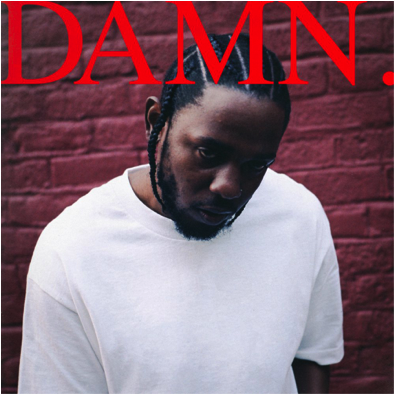 On Good Friday, Compton rapper Kendrick Lamar released his fourth major studio album, DAMN. Kendrick is best known for good kid, m.A.A.d city from 2012 and To Pimp a Butterfly from 2015, albums that redefined what a rap concept album can be. Many critics rank these records as among not only the greatest hip-hop projects of all time, but also among the most important records ever made across all genres. Where could Kendrick possibly go from there?

Is it wickedness? / Is it weakness? These questions herald the beginning of “BLOOD.”, establishing themes of duality that will prevail across the thirteen tracks to follow. This short track features Kendrick telling a story of trying to help a blind woman on the street, only to be shot dead by her. For the rest of the album, Kendrick frantically reflects on virtues of his life as he is violently pulled by both wickedness and weakness.

“DNA.” is the first standard song on the album, and it is the definition of a banger. Here, Kendrick’s wickedness shines through as he spits some of the most braggadocious lyrics he has ever written. By the second verse, producer Mike WiLL Made-It switches the beat to one of the hardest hip-hop instrumentals in years, and Kendrick’s lyricism grows more and more rapidfire as he proudly proclaims his intrinsic greatness defined by his heritage.

“YAH.” follows, bringing Kendrick to his “weakness” side as raps about temptation as a star. In this track, backed by a grimy laid-back beat made by DJ Dahi, Kendrick first introduces the religious themes of DAMN. with references to the Book of Deuteronomy, comparing himself to the exiled Israelites in the Bible. It’s a bit short, but the beat alone makes it well worth a listen.

The wickedness then returns with “ELEMENT.”, an anthem of pride as Kendrick raps about overcoming the extreme adversity he faced growing up dirt poor in Compton, and how despite all that, he is still greatest. Next, the weakness overcomes him on “FEEL.”, a track that will please fans of To Pimp a Butterfly with its jazz-inspired instrumental. Here, Kendrick is paranoid and alone, desperate to know if people are still looking after him, making for one of the more intimate tracks in his discography.

Rihanna appears in the next track, “LOYALTY.” This song finds Kendrick venturing into a more mainstream pop-rap sound, but he does so without sacrificing his sound or the depth to his lyrics. It’s a gorgeous song, and Rihanna fits surprisingly well alongside Kendrick as he sings (yes, sings) about how much he values loyalty in the people around him.

“PRIDE.” is perhaps the most beautiful song on the record. The production is flawless; there are guitars that sound straight off of Frank Ocean’s Blonde, and Anna Wise, a regular collaborator, contributes her splendid voice for the chorus. It’s also a dark song, with Kendrick introspectively exploring the perils of pride. The album’s lead single, “HUMBLE.”, is another track that finds Kendrick out for blood. His wickedness is at its height, telling every rapper out there to sit down and be humbled by his lyricism. It’s worth noting that Kendrick is unapologetically boastful on “HUMBLE.” yet vulnerable on “PRIDE.”, again emphasizing duality and poetic contradictions.

The wickedness continues on “LUST.”, an Outkast-like song produced by BADBADNOTGOOD in which Lamar dissects monotony in the life of his stardom. Paired with this song is “LOVE.”, one of the sweeter and poppier songs Kendrick has done.

“FEAR.” is by far the crown jewel of DAMN. It is in this song that all the pieces fit together. With an amazingly smooth beat by the Alchemist, Kendrick discusses fear first as a seven-year-old growing up in a house rife with domestic violence, then as a seventeen-year-old thrown into the gang life of Compton, then as a twenty-seven-year-old rapper afraid of losing his identity and his legacy. With the final verse, the concept of DAMN. finally clicks:

I’m talkin’ fear, fear that it’s wickedness or weakness / Fear, whatever it is, both is distinctive / Fear, what happens on Earth stays on Earth / And I can’t take these feelings with me / So hopefully they disperse / Within fourteen tracks, carried out over wax / Searchin’ for resolutions until somebody get back.

Finishing up DAMN. is “GOD.”, a cloudier song in which Kendrick imagines what God feels like. “DUCKWORTH.” ends the album, telling the fascinating story of Kendrick’s father. Mr. Duckworth worked at a KFC, befriending a local gangster with free chicken and biscuits. When this gangster decided to commit armed robbery at this KFC, he spared Kendrick’s father. The criminal wound up being the founder of Kendrick’s record label. If not for those free biscuits, perhaps Kendrick’s dad would be dead and Top Dawg Entertainment would have never been founded.

Admittedly, DAMN. as a whole feels subpar upon the first listen. After all, how could anything live up to Kendrick’s catalog so far? But with repeated listening, everything fits together more. It is an amazingly constructed record ready for the mainstream, yet put together with architectural precision with its themes consistently woven through each track. DAMN. beckons the listener to question it and theorize. Is the cover Kendrick being shot by the blind woman? Is there significance for releasing it on Good Friday? After really examining “FEAR.”, I think it’s one of the greatest hip-hop songs ever written, and I do not say that lightly. The combination of production and lyricism is unparalleled nowadays.

Somehow, Kendrick Lamar managed to live up to To Pimp a Butterfly. It seemed impossible, but it is further proof that his artistic prowess absolutely demands attention and respect as one of the greatest artists in the entertainment industry ever. DAMN. is a brutally honest manifesto that keeps Kendrick’s streak of amazing albums going.

Key Tracks: All of ‘em